Posted by Justin at 4:04 PM
My district uses Schoology as our Learning Management System.  It's our online gradebook, classroom page and discussion board.  For people who went to college, it's like Blackboard, but more appropriate for secondary schools.  I have worked with many different systems and I have excellent feelings about this one.  I think it's very versatile and has a ton of useful features.

One of the features that I was utilizing today was the "View Assignment Statistics" feature!  Once the grades for an assignment are placed in the book, you can view the distribution of those grades.  These are two of the interesting distributions from the quiz today. 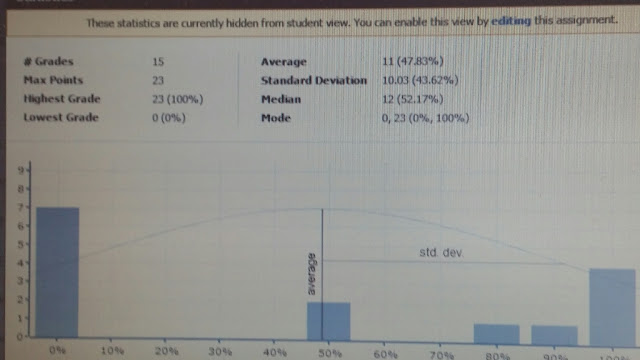 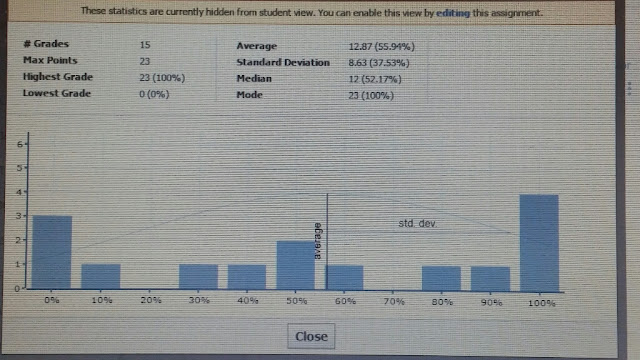 I am deeply fascinated by these two graphs.  In the first image, what jumps out at me is the lack of students in the middle.  The second graph is fairly representative of my marking period grade distribution overall.  I had no less than 10 students either refuse to take the quiz or turn it back to me with nothing written.

Both these make perfect sense to me in terms of how my classes go.  I think my course is fairly easy.  We cover the Astronomy content on a level that might be more appropriate for a lower-level course.  It is designed to be a place where students will learn new information and expand their understanding of the universe.  It is NOT designed to be a super-intense training for future astrophysicists.

Those students who are paying attention, turning in assignments and being at least semi-active in class, are doing well.

Those who are not, are not.  There are VERY few students who are doing the assignments and not doing well.

I'm not sure what to take from this that doesn't sound like "I'm clearly teaching.  They just aren't doing their part."

I know there are more factors in play here.  I have several different students say to me that "This is the only class I'm doing poorly in.  This and Algebra 2."

If that is true, I'm not sure if the Algebra teacher and I are doing what we are supposed to and none of the other teachers are, or vice versa.

Or if, again, this is a MUCH bigger issue than one teacher can legitimately tackle.

Either way, I'll keep encouraging them to push themselves and grow.

The other item that was on my today was an altercation with a student.  After they finished their quizzes, I let them listen to music or work on other assignments silently.  Several students throughout the day had their music up too loud (because I'm now an old man) and they were asked to turn it down.

One student stared me down.  I could still hear his music from across the room.  At that point, I asked him to put it away.  He then became very loud, claiming that I was picking on him, that he had turned it down and that other people had their headphones on.  I told him that I couldn't hear theirs and he claimed that he had turned his down as I asked.

In an effort to maintain equality, I had everyone else put their phones away.  Because I'm a bully and a petulant child...

He didn't.  It escalated.  I asked him to step outside.

He didn't.  I called security to remove him.

It took him 2 solid minutes to gather his items, yelling the entire time.  Over the course of that rant, it sounded to me as though he called me a bitch, but I wouldn't swear by it and he says he didn't.


This is not the first such encounter I've had with this student.  He knows exactly how to push my buttons and if he doesn't get what he wants when he wants it, he'll push them VERY hard.

And I let him.

I have no idea how to de-escalate these situations.  Irrationality abounds on both sides.  I've tried to speak with him individually when the situation is not so tense and he's amenable to the conversation, so I may have to try that route again.

There is no quick fix.
Email ThisBlogThis!Share to TwitterShare to FacebookShare to Pinterest