Posted by Justin at 3:11 PM
I very much enjoyed today's astronomy assignment/activity.  As a precursor to the quiz on constellations that they're going to have tomorrow, I handed them a piece of paper with stars on it. 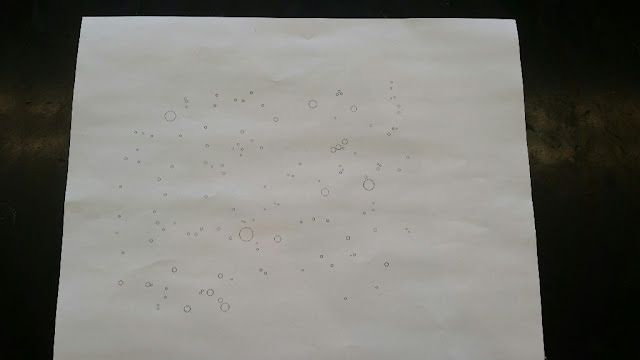 Their task to identify which part of the sky is represented, find the constellations and label the major stars.

After a few minutes of unmitigated confusion, several fits of tears and screams about how hard this assignment was, I calmed down and they got to work.  Those who put the effort in seemed to find this activity somewhat fun.  They saw it like a puzzle, which is a great way to see it.

Tomorrow's quiz will be almost the same, but they will have to identify which is the summer sky and which is winter as well as the direction of the North Star.

While they were working, I called them up to check in any of the work that they had completed for the Science Contract for this chapter.  I reminded them that everything was going to be due on Wednesday (the day before parent-teacher conferences) but anything they wanted to turn in early could come in.

I have high hopes for the Experimental/Creative sections of this chapter.  They have the option of making a Pringles Can Constellation Viewer, constellation cookies, constellation cake, or building a stellarium!
Since they were working on their own today, I was able to scoot my rolling chair around the room and work one-on-one with a bunch of different kids.  I love doing this because it reminds me that so much of the negative student behavior is often a front.

There are very few kids who, in a one on one situation, are out of control.  In my decade in the classroom, I think I have encountered less than a dozen.  Kids want to be heard, want to be spoken to as though they are people with valid opinions and concerns.

I wonder if this could be due to the fact that they are.

One of the easiest ways to get attention is be a loud, obnoxious jerk.  Believe me, I know.  Sitting across the desk from a student, giving them my full attention, is a great reminder, for them AND for me, that there are other, more productive ways to give and get attention.

I would love to do this more often, but it frequently feels as though I'm teaching in the ghost house from Super Mario Bros.

In Physics, I demonstrated the importance of impulse by jumping off of the desk, twice. Once by bending my knees and once by not.

I should send a note of apology to the teacher in the room below me.
Email ThisBlogThis!Share to TwitterShare to FacebookShare to Pinterest