Posted by Justin at 4:01 PM
Progress reports are due on Friday.  As per my usual routine, I don't have a ton of grades in yet.  My students in Integrated only have 1 and the other classes only have 2.  This means we will be having a quiz on either Thursday or Friday of this week.

THAT means that I need to hit certain concepts under my new Standards-Based Grading system, so that I CAN give a quiz.  In the Math 7, I'm not too worried since what we've done so far has covered that material.  In the Pre-Algebra classes, I have some concerns.

Up to this point, the Pre-Algebra class has been following the Math 7 standards as a review of concepts.  Today, we started working on 8.NS.A.1 (I can show that every number as a decimal.)

I had the kids pick spots on the whiteboards and gave them a few fractions to convert into decimals.  The idea was to have them make conclusions about the types of decimals that can be made from fractions (terminating or repeating) as a lead-in to a discussion of rational numbers.  What was supposed to be a warm-up took the entire class.

There are several issues that I'm finding with foundational understanding, some of which can attributed to summer attrition, but not all.

In my advanced class, we had a conversation about choices and the wisdom behind the concept of "if you are struggling with a concept, it may make sense to pay attention when we go over it."


In 2013, I had the pleasure of meeting Max Ray-Riek.  In the intervening years, I've been able to spend some time with him and had him observe my teaching.  He told a story about being in band and losing his place.  Take a few minutes and watch this:


My students do exactly this.  We have incorporated such shame is being lost, in making mistakes, that students who are unsure of themselves have a tendency to hide.  When hidden, they don't get their needs met.

Adding to this, there are several students who understand the concepts VERY well and are very vocal about it.  Their enthusiasm and energy is excellent, but can inadvertently make those students who struggle feel even worse about their level of understanding. 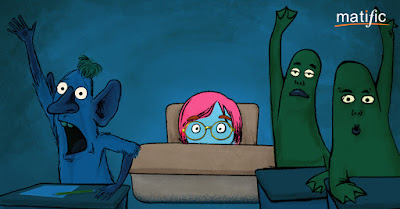 I know that it's going to take a while to build that culture where they feel ok saying "I don't understand" and "I need help."

I sincerely hope that I'm able to build it before they fall too far behind.

I need to do a better job of giving independent tasks so that I can circulate through the room and give those quiet students more of a chance to ask their questions in a smaller space.


My frustration at lack on conceptual understanding in one class and behavior in another caused me to snap.  I got into an argument with a student in front of the class and his smirk at knowing what he was doing sent me further over the edge.

I tried to teach afterwards but it wasn't happening.  I stopped mid-sentence, walked to the window, took a breath and asked them to sit down.

Then I apologized.  It was a sincere apology for speaking to them the way that I had been.  I expressed understanding at their frustration and explained my own, while acknowledging that my actions were not acceptable.  I asked them to forgive me and asked if it would be alright if we moved on.

I approached several students afterwards to apologize to them personally for my actions and to ask what they needed from me in order to achieve and learn.

While frustrating, today was still a good day and it has given me more insight into what I need to do for my students.
Email ThisBlogThis!Share to TwitterShare to FacebookShare to Pinterest