Posted by Justin at 4:03 PM
Standards-Based Grading is new to my students as well as to me.  After their first SBG quiz on Friday, I spent considerable amount of time putting the data into a nice spreadsheet, adding features and making it easy to understand.

Before I handed the quizzes back today, I went over the sheet and explained what we were looking at.  I asked them to tell me what stood out to them. 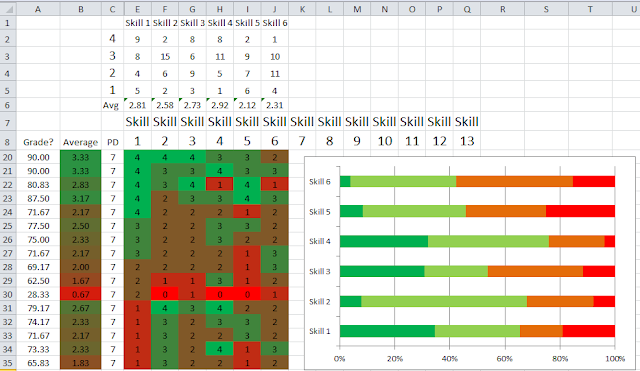 This version automatically converts the various skill scores into the 100% scale for easy transfer to our traditional report cards.  It also, through the chart on the side, gives us an easier way to quickly see which skills are weak in all of the sections of a class.

Through trial and error, I discovered that it was better to go over this chart before I gave the quizzes back.

I reminded them that this is merely a snapshot of one moment in time.  Any skill can be reassessed as many times as necessary.  I also expressed my pleasure that no one earned a 4 on every skill.  Everyone has some growing to do and that's fantastic!

Now we have this information. What do we do with it?

Today was #MistakeMonday and I incorporated that into our task.  Instead of having students write about a mistake they made last week, I had them write about their quizzes.

I had them take out a clean piece of paper and make 3 columns.  The first column was labeled "Skill #" with the second labeled "What Kind Of Mistake" and the labeled "Plan for Reassessment."

For each skill, the students were asked to identify whether the mistake they made was a careless error, a conceptual misunderstanding, or something else.  I explained the differences between these by putting the following two equations up on the board:

We had a brief discussion about why each one was wrong and, most likely, why that mistake was made.

In the last column, the student was asked to lay out a plan to improve on the skill before they reassessed.  That plan could include staying for extra help, doing more practice problems, working with friends, watching online videos, etc..

My plan is to offer reassessment on Fridays.  After a student has shown me that they have made an effort to improve their ability, they can reassess whatever skill they want, replacing the old score with the new.  I showed them an example in the spreadsheet of how the new score changes the overall average and leaves no record of the first score.

In one class, I had to field the same questions over and over from students who are used to getting straight A's and were not used to being able to correct their mistakes.

Another reason I love SBG as much as I do is because it allows students to make mistakes with no penalty and encourages them to learn and grow from those mistakes.


So I handed back the quizzes and students were both confused and upset.  On a quiz with 4 skills, there were 4 scores.  One student looked very sad and I asked her what was wrong.

This means that she knew what she was doing on 3 of the 4 sections and completed them VERY well.  None of that mattered, however, as she was focused on the 1 and the converted percentage.  I spoke with her about her strengths and celebrating those before focusing on weaknesses.

It didn't seem to sink in.

I know this will take a while, but I think it's worthwhile.

Some of my nerdier colleagues are SUPER excited and keep coming to my room to ogle my spreadsheets. I hope they buy me dinner first.
Email ThisBlogThis!Share to TwitterShare to FacebookShare to Pinterest