Posted by Justin at 4:12 PM
When a politician is running for re-election, the most common phrase you hear is "you don't change horses midstream."

I've always thought that this was a stupid analogy.  You don't change horses, not because it's foolish, but because it's impossible.  They don't have pit stops at the Kentucky Derby where you re-shod the shoes, check the flank pressure or clean the blinders.

In addition to this, every other sport that I can think of has exactly the opposite approach.  When a pitcher or kicker gets tired, you trade them out.  Golfers change clubs for almost every shot.

We make changes whenever we needs to, if it's possible.  Those who don't adapt are doomed to die.

In teaching, especially those of us who teach multiple sections of the same course, rarely teach the same topic in the same way.  We notice mistakes that we made the first time, examine student misconceptions and tweak the lesson for the next time we teach it.

Or, in some case, we toss out the lesson completely and start over.


After 2nd period (Pre-Algebra), I through out my lesson and started over.  I wasn't pleased with either the presentation or the reception.  On top of that, it occurred to me that it wasn't moving the class in the direction that I wanted to be moving.

In addition to this, the elementary classes have been working with area models and the vertical consistency is important.

My presentation in 2nd period was alright, but it wasn't as consistent with what I want to be doing moving forward.  I worry about such course corrections between classes because I don't like having one period be an entire class behind because of my mistake.  Unfortunately, that's part of the reality of what we do.

More than that, I don't want 2 classes to miss out on a superior lesson simply because I didn't think of it soon enough for the first class.

If it's better for the kids, switch clubs, pull into the pit stop, get a relief pitcher, send in the second string and switch horses midstream. 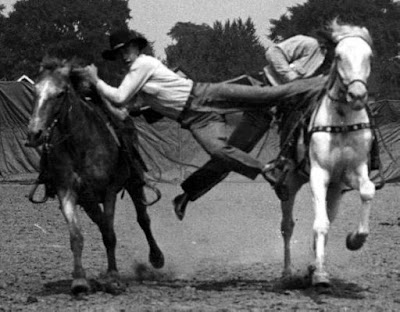