Many of my students lack the numeracy and mathematical skills that I consider requisite for my courses.  It's difficult for me to understand the origins of these difficulties because they seem so incredibly varied.

In previous years, the analogy I've used is that given puzzle pieces, my students would have difficulty putting the puzzle together.  This year, for many, but by no means all, I'm not sure if they understand that there is a puzzle to be put together from these oddly shaped chunks of cardboard.

For example:
I am framing basic numerical operations in ways that allow us to think about them in physical terms.


In Math 7, I put a problem on the board and, standing at their own section of the white board, each students write the language that we're using and then shows how they completed it. 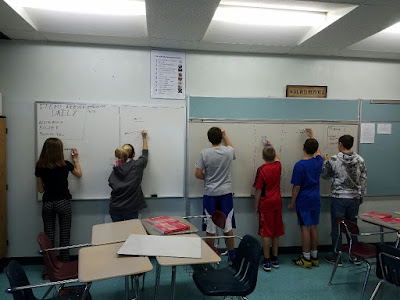 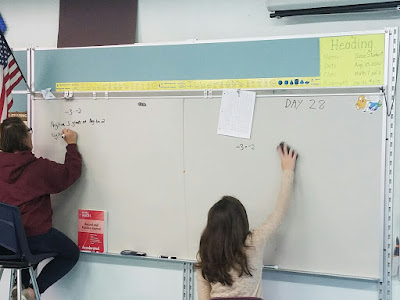 Almost everyone put down 24 circles or squares on the board and put them into groups.

A few, however, instead of making groups of 6, drew 3 groups of 8.  When I asked about it, the students said that they were able to make a rectangle (8x3), which is what they saw in the example.  This is a fantastic observation for finding factors, but it wasn't the activity that we were doing.

I also want to be clear that I don't think these deficits are the result of lack of effort.  For the most part, they are jumping in full force and doing what I ask of them.  So far, I'm not seeing much correlation between effort and understanding.

This makes a certain amount of sense to me since the approach I'm emphasizing could be described in a business meeting cat poster as "Work smarter, not harder."  It's not as much about the effort as much as it about making connections between ideas.

I also want to be clear that I don't find fault with their previous teachers.  I've been speaking to the other teachers in my wing and they don't understand what's going on either.  This year seems to be an anomaly.  Whether that's true or not doesn't change that I need to do something,

Could it be an issue with my presentation?

I desperately hope that the same can be said for my students.  I'm trying to make as many personal connections with them as I can.  I know that I'm a new teacher, with new experiences, teaching new kids in ways they've never seen.  I need to build up the trust from them.

If they trust me, they will go with me to the ends of the earth. 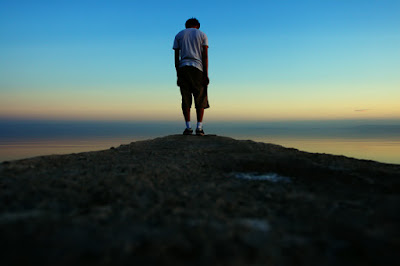 Maybe.
Email ThisBlogThis!Share to TwitterShare to FacebookShare to Pinterest