Posted by Justin at 1:13 PM
After school on Wednesday, I high-tailed it to the airport to fly to Phoenix for the National Council of Teachers of Mathematics Western Regional Conference.

Phoenix is gorgeous! The city itself is almost perfectly flat, but it's surrounded by mountains. 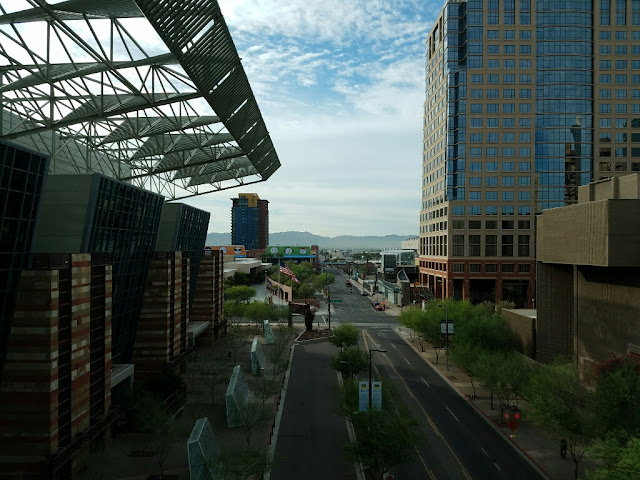 What sessions did you attend, Justin? What did you get from them?

What a great question, fiction reader!  Let me tell you.

When I opened my laptop, I was pleased to find a picture from my older daughter:

I began the conference with Karim Ani (@KarimKai) from Mathalicious talking about the differences between procedural, conceptual and applied understanding.  I have seen several presentations from Karim and Ginny Stuckey on the amazing programs, activities and applications that Mathalicious uses to make math real for students.  I always love how engaging they are, both in terms of the activities themselves and as presenters.  I am a firm believer in their vision and how it's executed.

My session went as expected.  I had 7 attendees, all of whom were engaged and asking questions, but it solidified in my mind that I need to stop presenting about blogging.  It just isn't a topic for which people are interested in attending a session.  It was suggested that I make it a workshop, where I help people sign up for Twitter, create a blog and get them started on the path, but I'm not sure how interested I am in that. 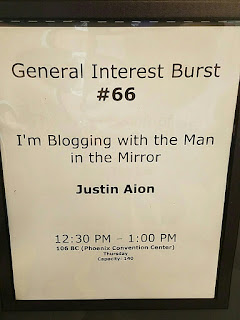 Rather than blogging, I've been thinking more and more about doing workshops on how to teach all levels of mathematics using the interlocking hexagonal building blocks that I've been collecting.  Workshops tend to draw more people and a considerable amount of interest has been expressed about this.

Looking around at the exhibitor hall, I noticed that there are tons of manipulatives for various grade levels, but not really any that are used from K-12.  I think this is an area that could use some exploration.  I was encouraged further on this point by a fairly important mathematician (whom I'll talk more about in a bit.)


Following my own session, I attended Megan Schmidt's (@VeganMathBeagle) session on teaching statistics and social justice.  The room was very well attended and the presentation was excellent.  We had a discussion afterwards about the kinds of people who would attend such a session.  Social Justice and Mathematics can be a fairly polarizing topic.  Either you understand the importance of it and feel the need to incorporate it into your lessons, or you feel that math class has no need to address these issues.

We encountered a few gentlemen in the presentation who felt the need to question the validity of the statistics that were used because they didn't conform to their worldview.  They felt the need to voice their concerns as though they had just attended a seminar entitled "Mansplaining is Like Nike: Just Do It!"

The first time this occurred was when Megan presented the raw data that showed the birth rates by gender paired up with the gender breakdown of elected law-makers in each state.  There was no analysis, simply a presentation of data.

Later, when looking at breakdown of school performance by race, another gentleman called out that Asian students were not on the list and had been marking their race as "white" so that they could get into medical school.

At our morning session on Friday, this man sat with us and attempted to engage Megan in conversation. We were not having it.

A third gentleman questioned the bias of the raw data obtained by the national department of education.

Megan did an incredible job redirecting the conversation back to the presentation and it was, ultimately, an engaging, fascinating and important conversation for us to have.


That evening, I attended a cookout with Stephanie Bowyer (@Melomania) and several of her colleagues.  We spent the evening talking math, teaching, nerd culture and having generally a great time.  I FINALLY got to meet Daniel Schneider (@MathyMcMatherso) and we hit it off like gangbusters!  Dude is awesome and brilliant!

When I got back to the hotel, I opened the program book for Friday and promptly fell asleep in it.


I attended 3 sessions on Friday, all of which were AMAZING!

Lisa Bejarano (@lisabej_manitou) started us off by walking us through her warm-up procedures for the week.  We worked through several of the exercises ourselves and it gave me a considerable amount to think about in terms of my own warm-ups and how directed they are.

I've been using Estimation 180 as my daily warm-ups, but the diversity of problem types here makes me want to switch it up.  She even had a sheet for students to fill out each week to provide them with guidance and direction.

I left her session feeling energized.  It only went up from there.

Next, I went to James Tanton's (@JamesTanton) session on Exploding Dots and a deep discussion of understanding place value.

Everything he said and showed us made me lean further forward in my chair and say "Holy crap!!" 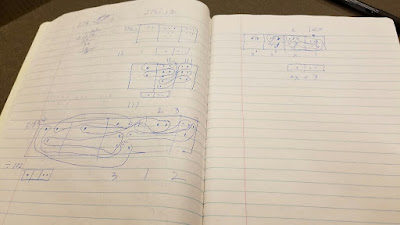 Halfway through the presentation, I sent a text to my colleagues back home that said "ASK ME ABOUT DOTS WHEN I GET BACK!!!"

What really hit home for me was how simple his explanation was to understand and how I can smoothly it goes along with the work I've been doing with hexagons in my classes.

After the presentation, I went to speak to him, to show him the hexagons that I had and how I had been implementing his practices in my class without realizing it.  When I pulled my hexagons out of my bag, he asked me how many I had.
"About 6300 at this point."
"Fantastic! Keep collecting them!"

James Tanton told me to continue feeding my hexagonal addiction.  Be still, my beating heart!


Still running high from these two sessions, I went over the "big hall" to watch Robert Kaplinsky (@RobertKaplinsky) talk about Depth of Knowledge.

His talk was engaging and disturbing, the kind of disturbing that makes a teacher question if they just spent 10 years thinking that they were teaching when really they were just passing students through the classroom.

He spoke about 3 different levels of Depth of Knowledge and how we can determine whether students TRULY understand the concepts we are teaching.  He talked about the different types of questions that go with each level.

All of these questions assess an understanding of the definition and execution of perimeter, but they get more and more complex as you increase the depth of knowledge.

This is the difference between rocket science and parenting.  Rocket science, while incredibly difficult, can follow a series of steps.  Building the FIRST rocket is infinitely more difficult than building the 1000th.  Raising a child, however, has no set of steps to follow.  Just because you've successfully raised your first child, or second, or fourth, doesn't mean that you will be any better at raising the next one.  There are simply too many variables.

"People think that cooking is complicated, that you can just follow the recipe, but in reality, it's complex. Just following the recipe isn't always enough." 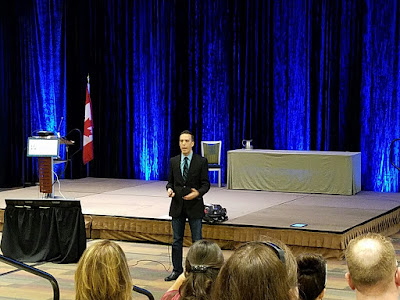 I've followed Robert on Twitter for a while now and have talked with him a few times, but actually getting to meet him in person was fantastic.


The list of people that I was honored to spend time and speak with is WAY too long to mention and I'm afraid that I would miss someone vital.  It was a pleasure to speak with so many incredibly insightful educators and learn from them.  I have a few days to mull these things over before NCTM Eastern Regional Conference in Philadelphia on Monday and Tuesday and then back to work on Wednesday.


I'd love to talk further about my experiences to anyone who is interested and made it this far in my post.

Time to board a plane.  It's 94 degrees here. It will be 53 when I land.
Email ThisBlogThis!Share to TwitterShare to FacebookShare to Pinterest