Posted by Justin at 6:05 PM
The skill assessments did not go as planned.

The Math 7 kids stumbled over questions that we have been covering for two weeks.  They didn't do as poorly as they could have, but it was very clear that they were not comfortable with the material.  When asked to write how we've been talking about multiplication, they wrote about division.

I had even left the wording on the board and kids who looked up still used the wording for division.

I'm not sure how to get them to examine their work and ask themselves "is this giving more or less than I started with?"

Over the last few days, I've been emphasizing the importance of using diagrams and our review yesterday was full of them.

The students who used diagrams on the quiz (including my English language learner) performed consistently better than those who didn't; somewhere in the range of 40% better.

There are issues with focus, attention, maturity and retention.  I've already had to move students in two separate classes because they can't seem to stop touching the people around them.  I point these out not as a way of excuse or blame-placing, but to identify the challenges that I need to overcome.

For the first time in a LONG time, I have faith in my lessons and methods.  It may be time to say that my seating arrangement (in groups of 4) isn't working for these classes and it's time to go back to rows for a while.

In Pre-Algebra, I can see a clear correlation between the attention that they pay to class and grades.  In addition, the kids who ask me questions on a regular basis are showing huge amounts of improvement.  This is no surprise.

There's also a MASSIVE difference in my classes.  Two classes have an average in the mid 80's while the third is hovering around 60.  Part of this is because of the time of day when the classes are held.  Another has to do with the make-up of the classes themselves.  The third class has a much higher percentage of students with special needs and IEPs.  That class is also bigger. 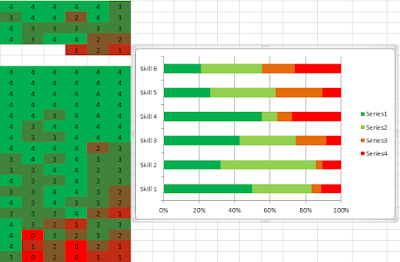 All of those are irrelevant since they are out of my hands, but it does show me that I need to attempt different interventions in that class.

The breakdown in Math 7 was similar, although not as extreme. 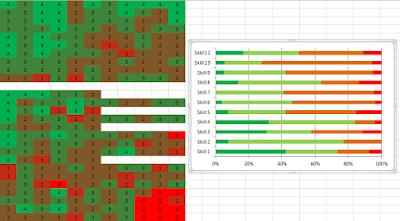 I'm incredibly fascinated by these charts.  They are sorted by overall score and not by name or other identifying marks.

What do you notice?

What do you wonder?


I wonder what I can be doing better for my students in the afternoon.
Email ThisBlogThis!Share to TwitterShare to FacebookShare to Pinterest