Posted by Justin at 4:31 PM
Today was quiz day!!  Last year, and much of the year before, EVERY Friday was quiz day!  I think the original intention was to summarize what we did for the week and give myself a chance to get caught up on grades.  This year, however, I've been thinking much more about the purpose of grades and tests, so I'm starting to rethink my reasons.

I'm thinking that I may move quizzes to Mondays.  This will keep each week from feeling like a separate event and will help with continuity.  In addition, slightly easier quizzes will serve to activate the memories from the prior week.  My OTHER thought was about making the quizzes about half the length that they are now and putting one on Friday as a wrap-up and one on Monday as an activation exercise.  Like a warm-up and exit-ticket for the week.

The geometry kids turned in their Mathalicious projects today and I was blown away!  This is the kind of work that I hope for from all of my students and shows a level of creativity and thoroughness that I've been missing as of late.  The instructions were general enough that it gave them considerable freedom in their presentation.  They told me stories of how they obtained their data.  Some ordered pizza and counted the toppings.  Apparently, enough of them called Domino's that when one girl called, the guy gave a resigned sigh and rattled the number of slices of pepperoni right off his head.  She said "Thank you!" and then called to order from Pizza Hut.  The enthusiasm and effort was good enough that I plan to do this as much as possible. 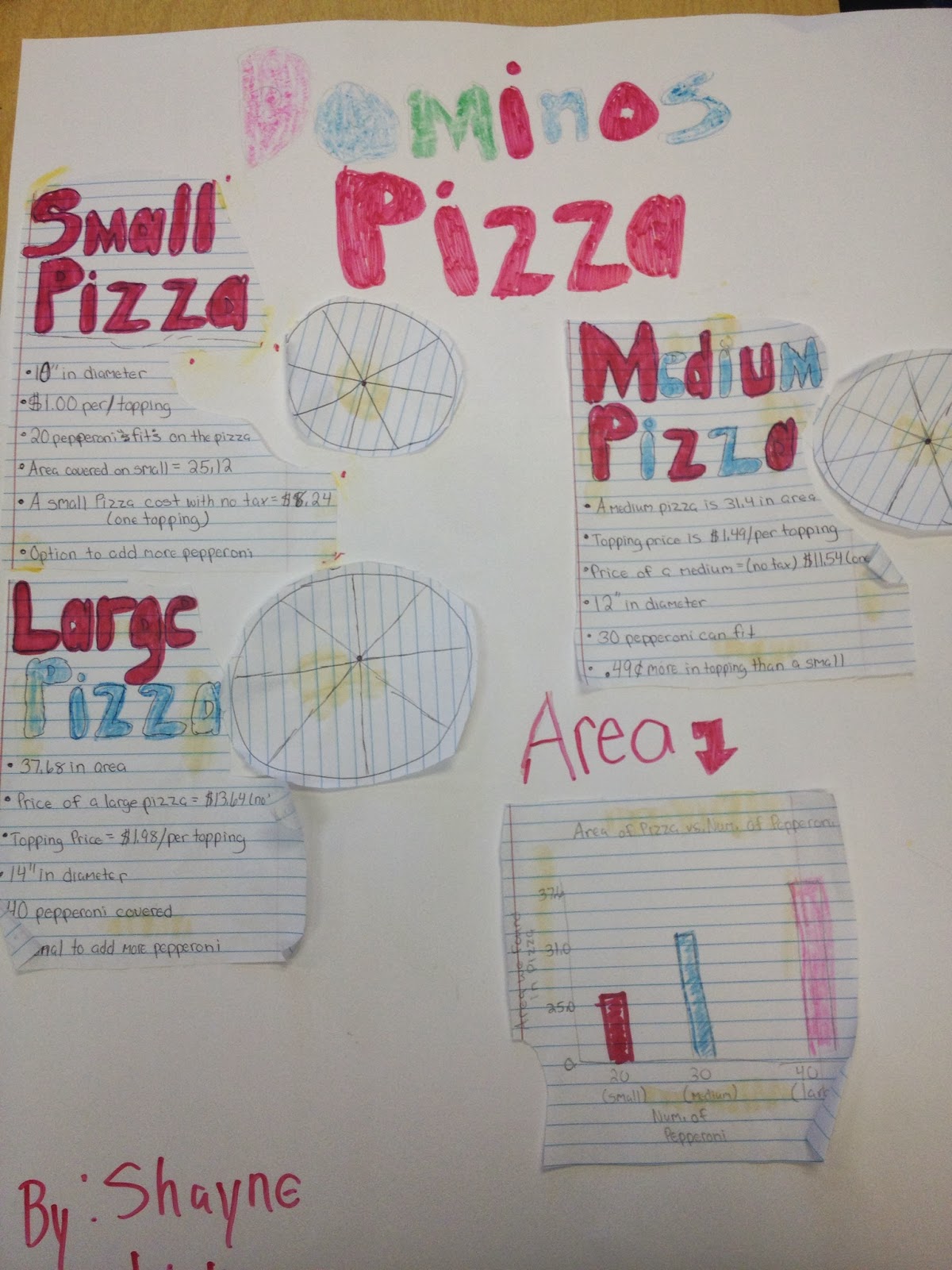 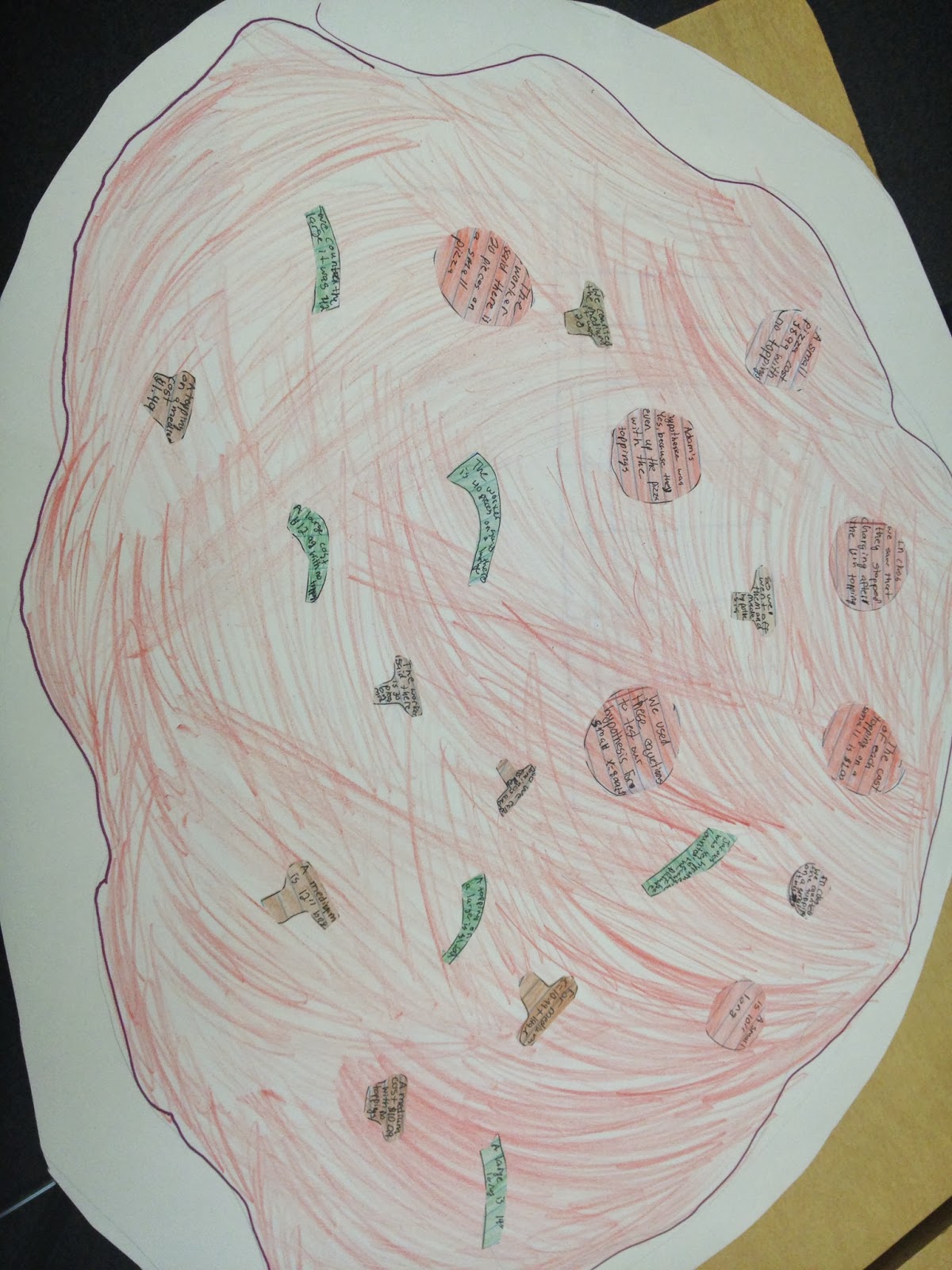 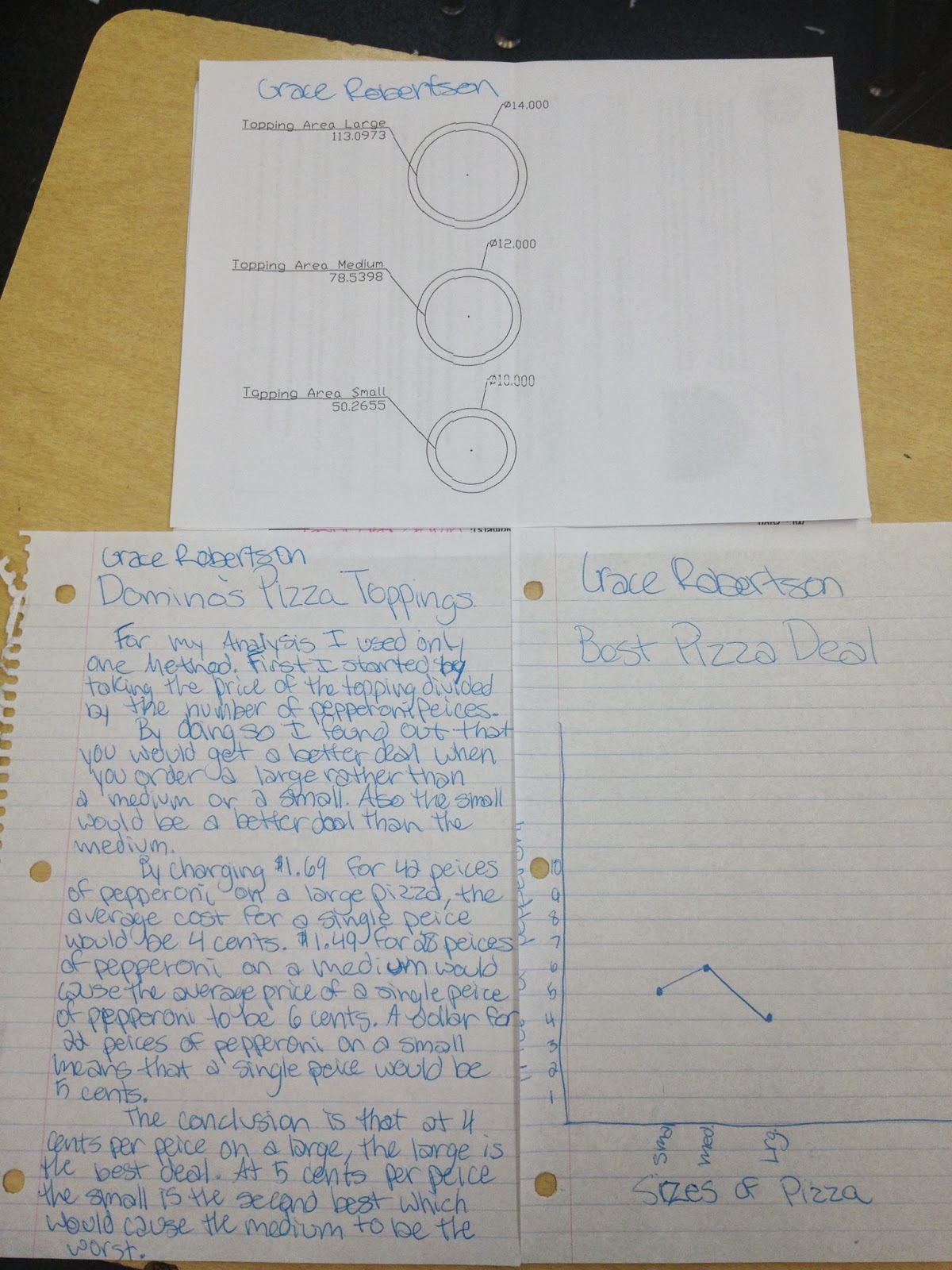 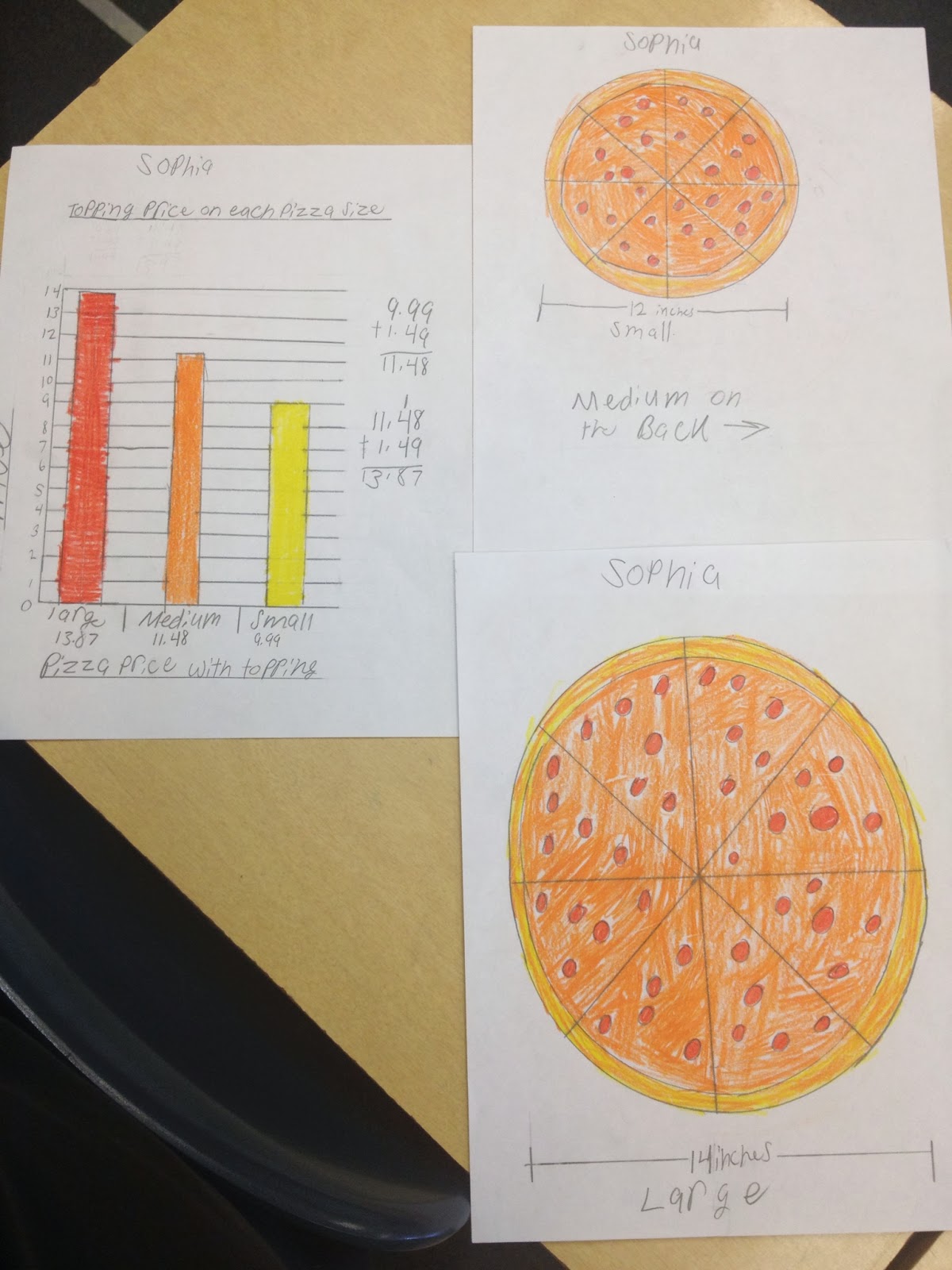 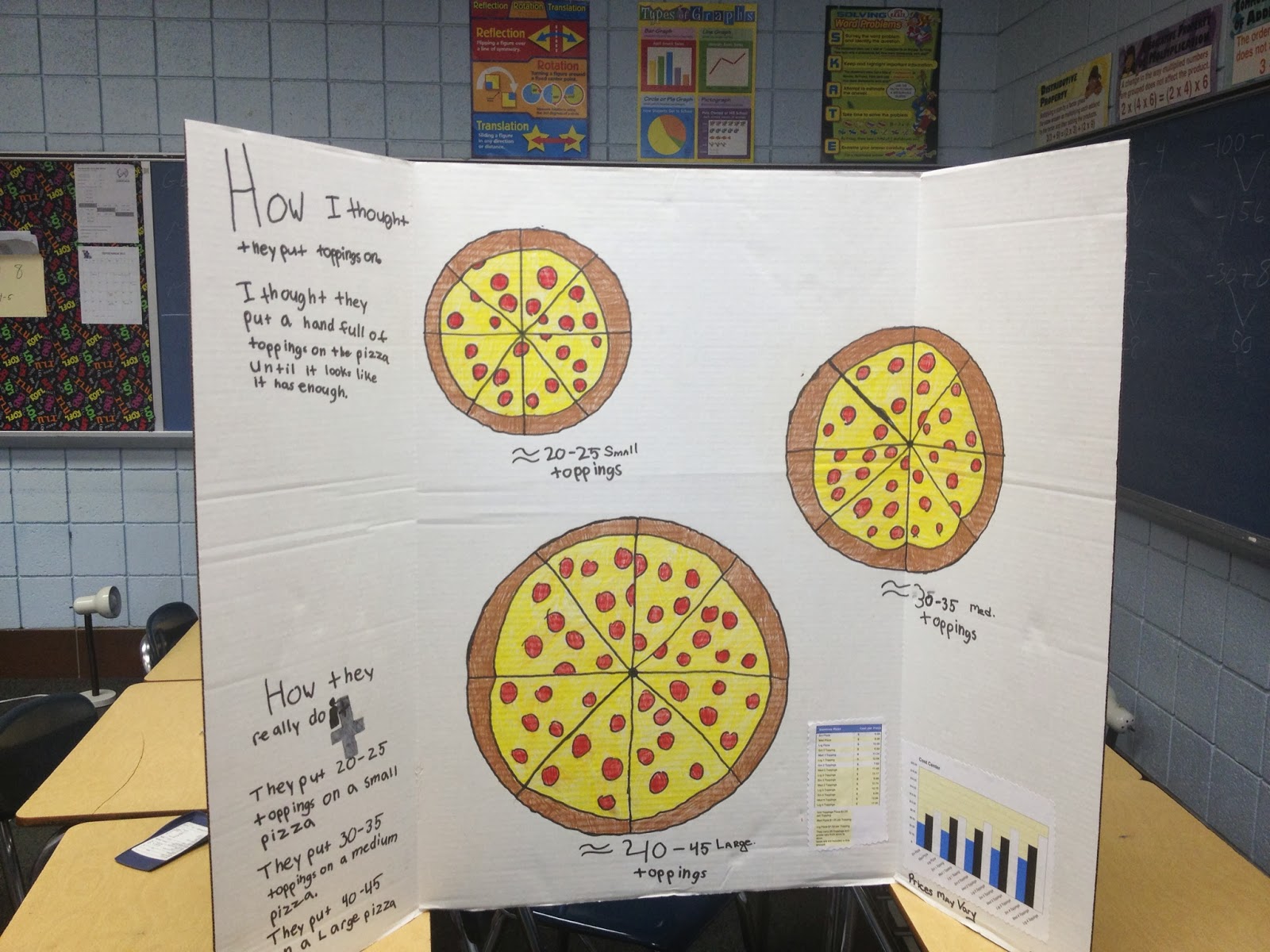 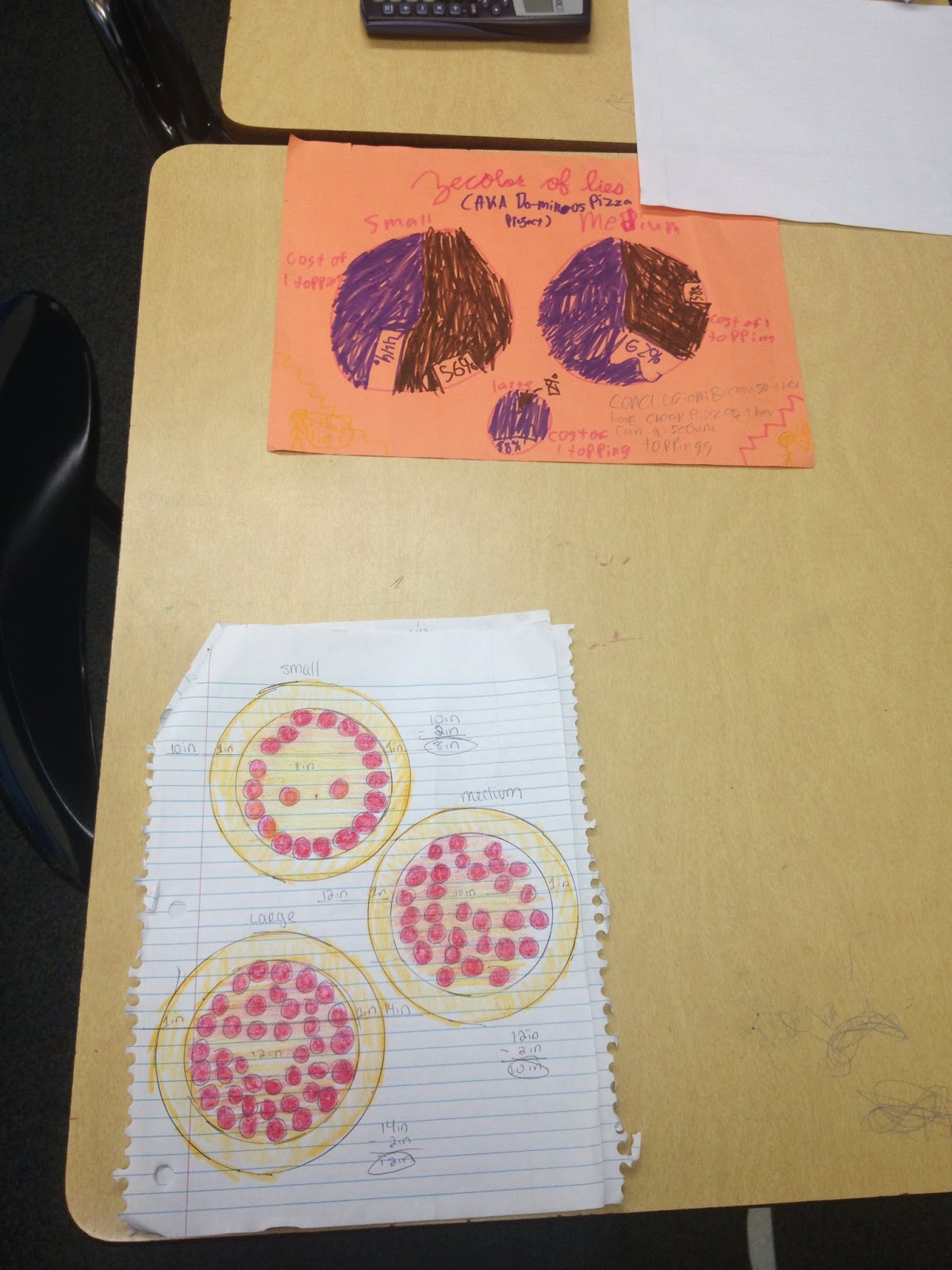 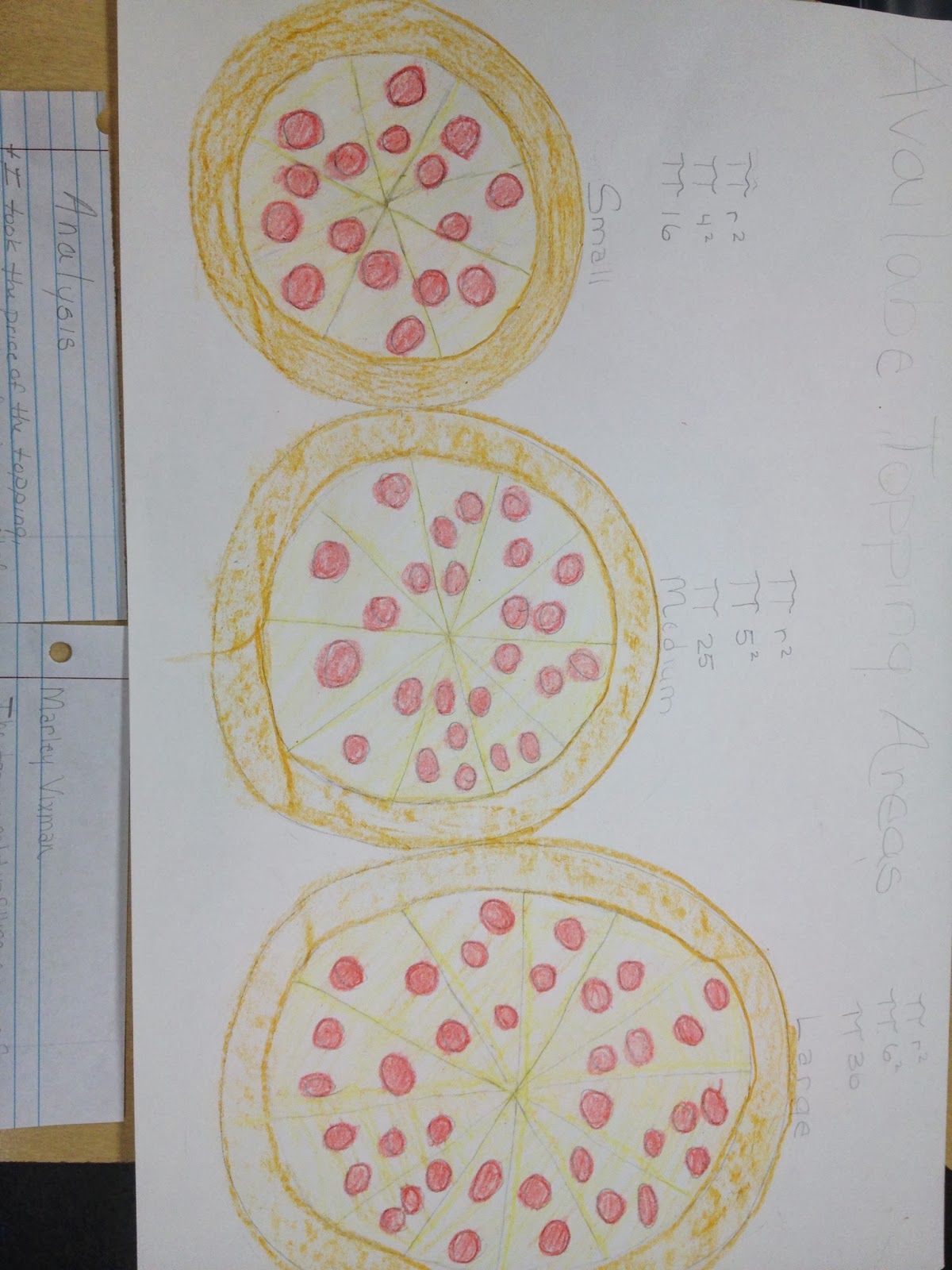 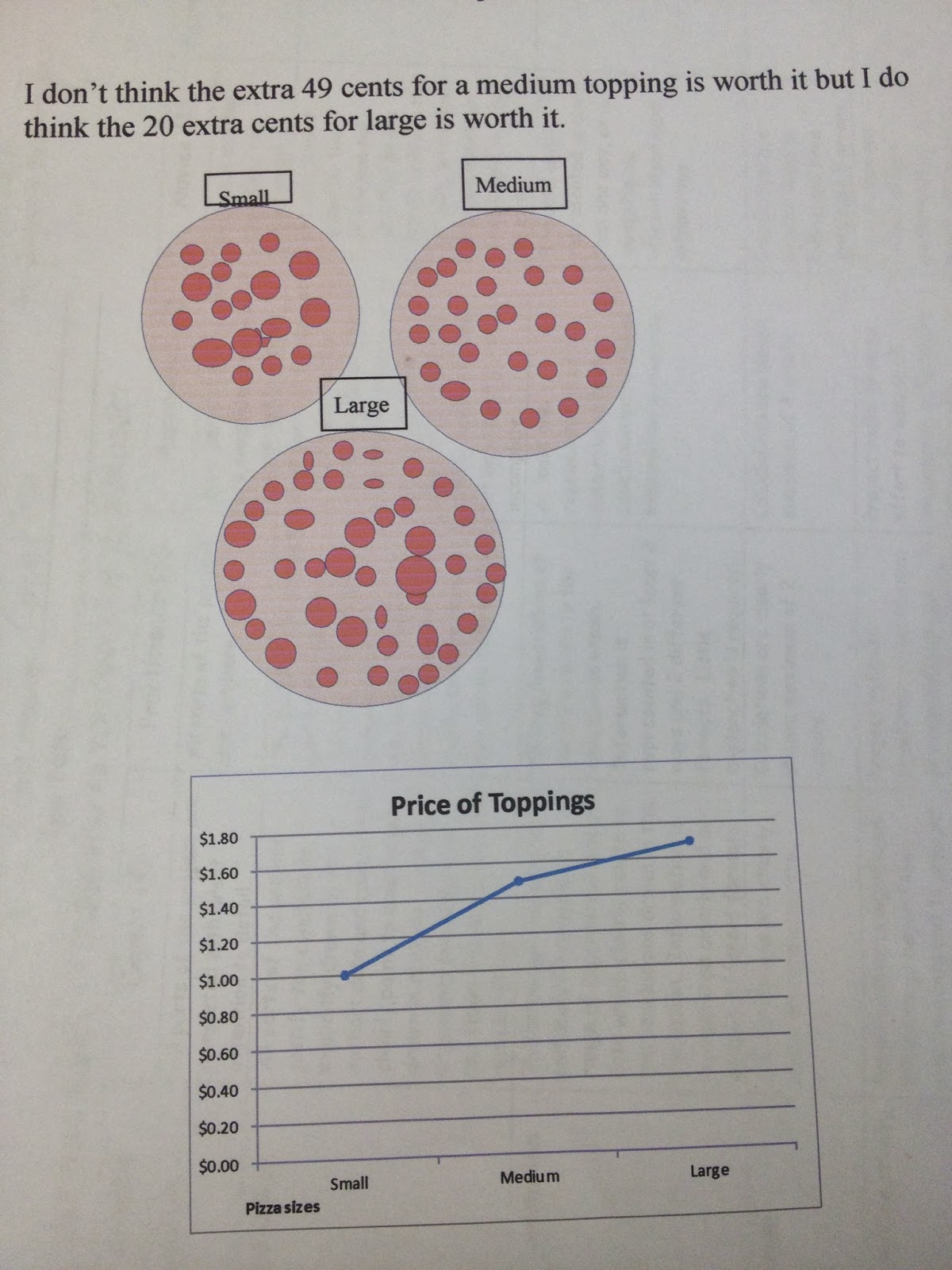 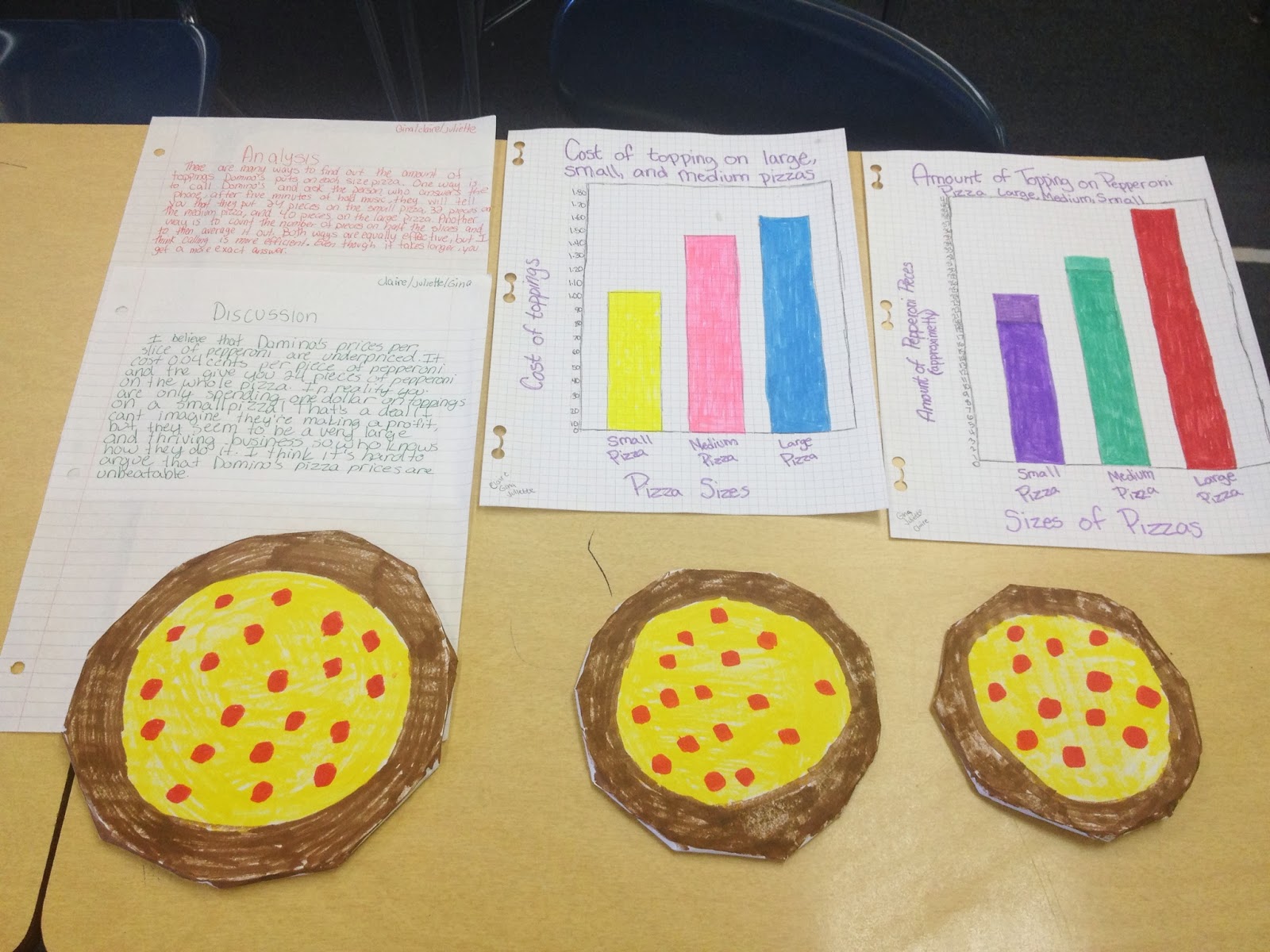 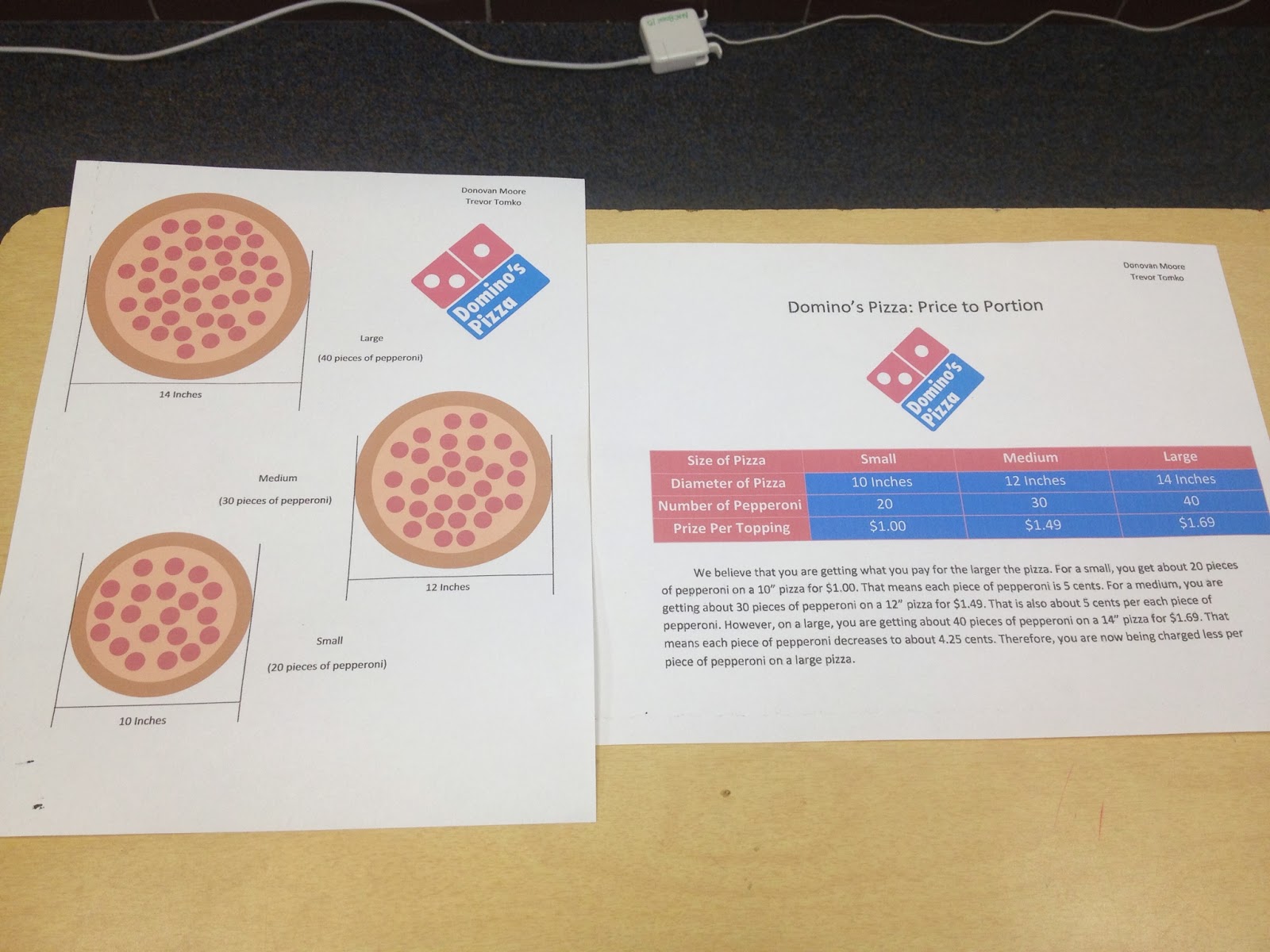 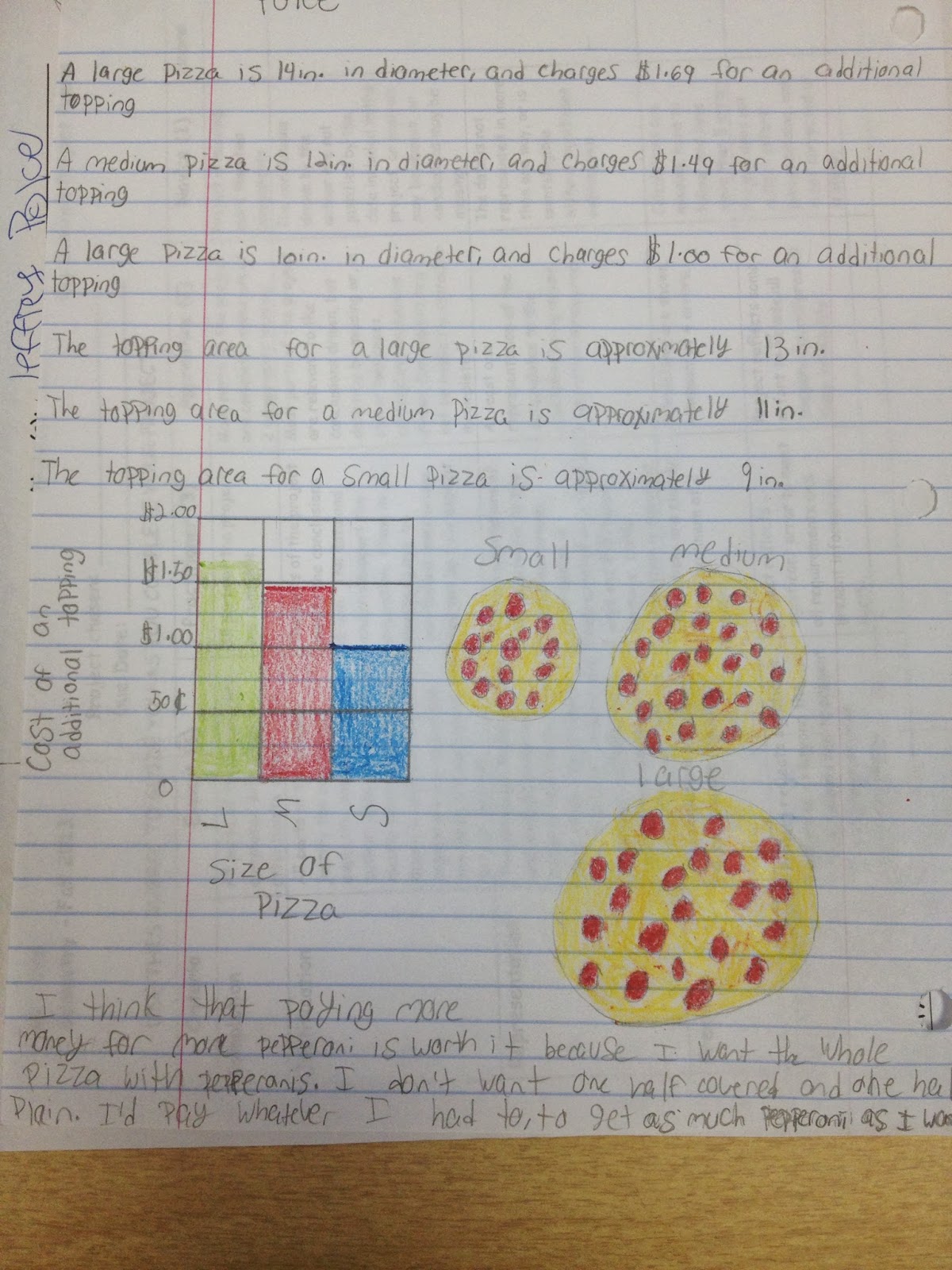 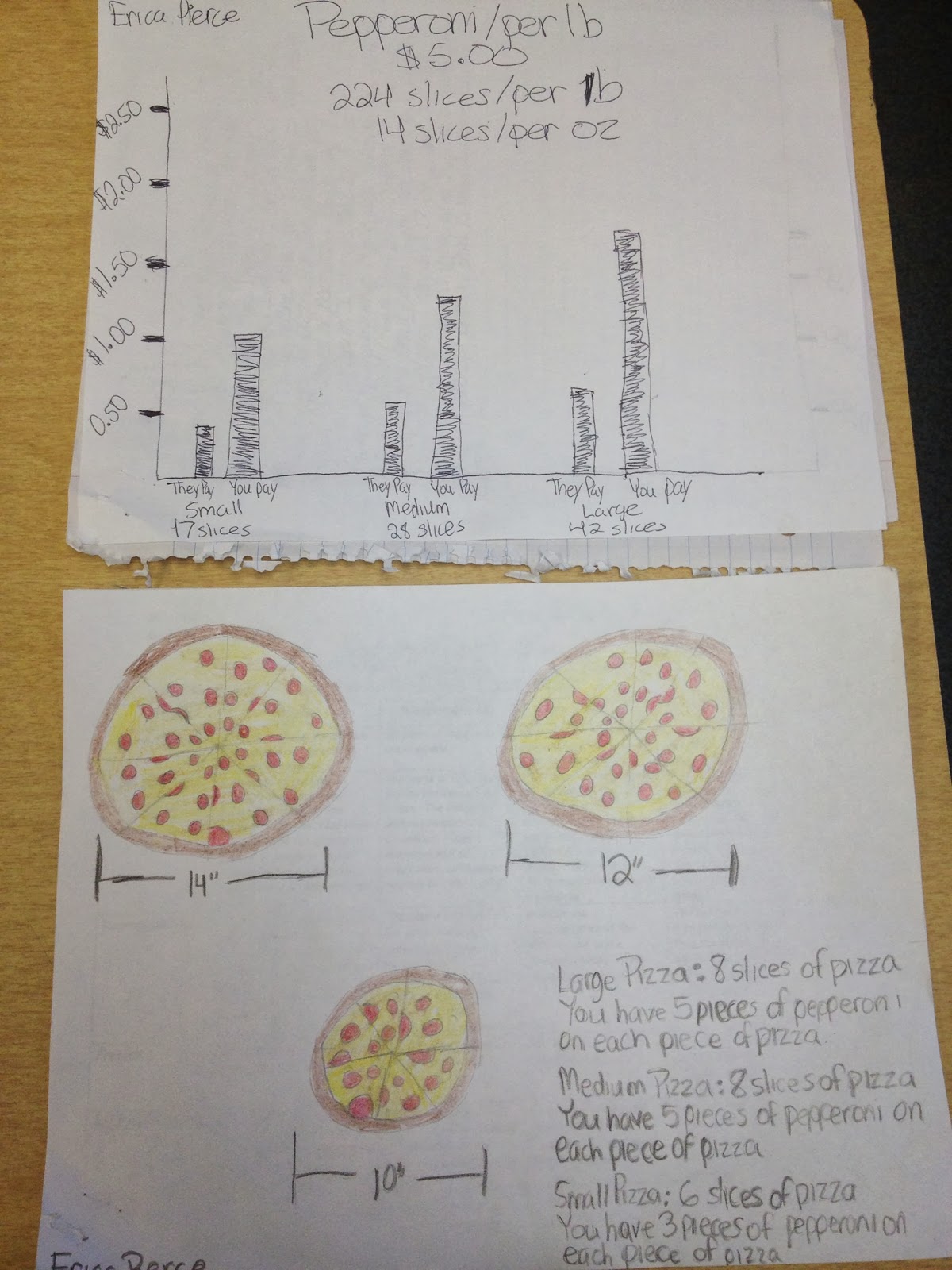 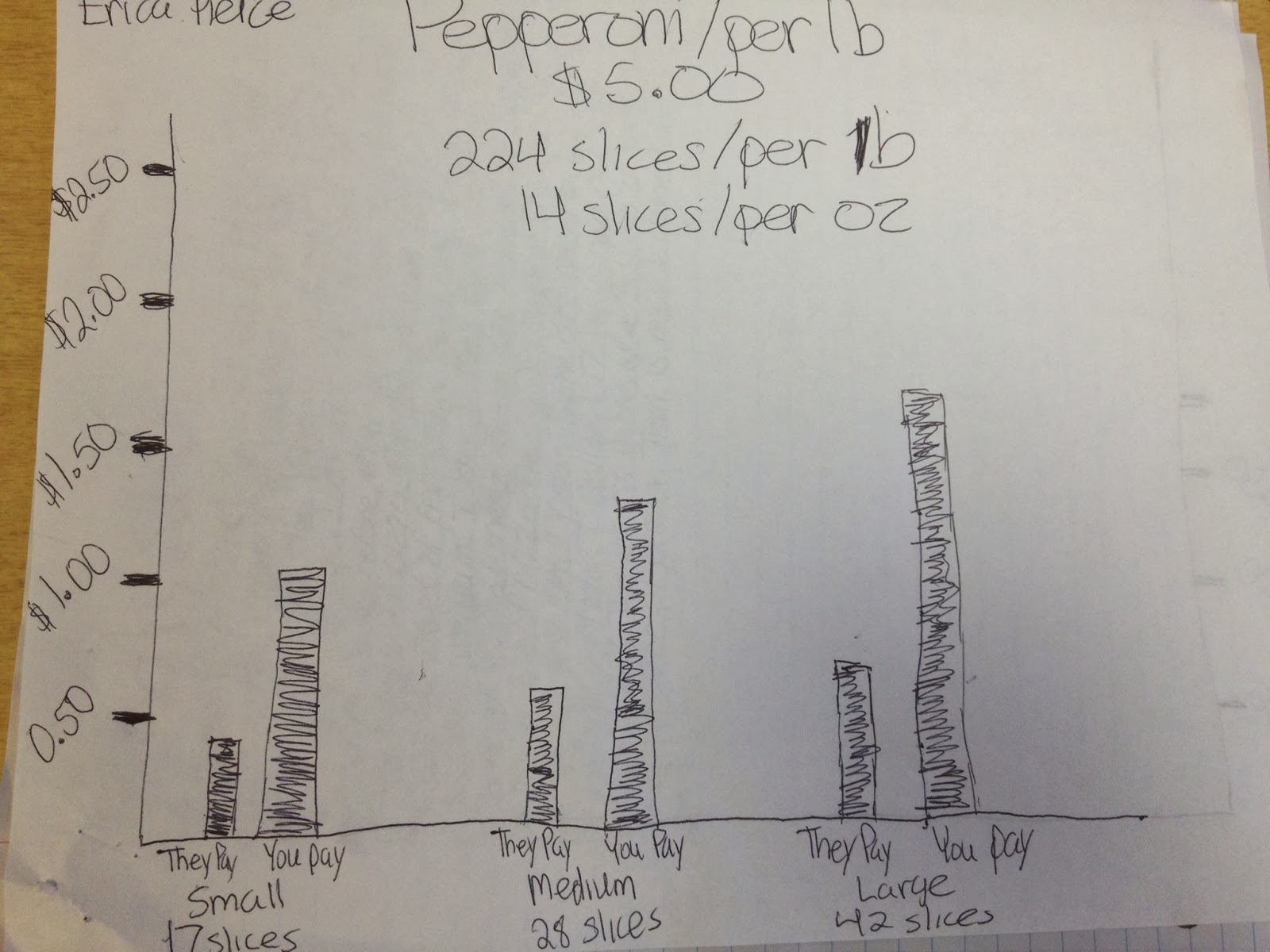 
Now I suppose I have to figure out how to grade these things!  I hate when grading gets in the way of learning.  What a shame I have to follow the curriculum instead of letting them learn what they are passionate about.

I suppose that just means I have to inspire passion from that which they think is mundane! :-)

Day 2 without being able to use my Promethean Board the way it should be used and I'm realizing how frighteningly dependent I am.  I have so many tools that I use with it which simply become impractical if I can't use the pen.  On top of this, my first two periods are too dark for me to able to use the board and write on the blackboard.  With the lights off, the kids can't see the chalk, but with them on, they can't see the screen display.

The advantage, however, is that I sent more kids to the blackboard to put problems up.  When I didn't have to worry about them taking turns with the pen, I had 5 or 6 putting up problems at a time.  This isn't something I normally do, but would like to do more often.

I am starting to notice a divide between the kids who pay attention in class and those who don't.  The spread on the first quiz, however, was pretty much were I wanted it to be. 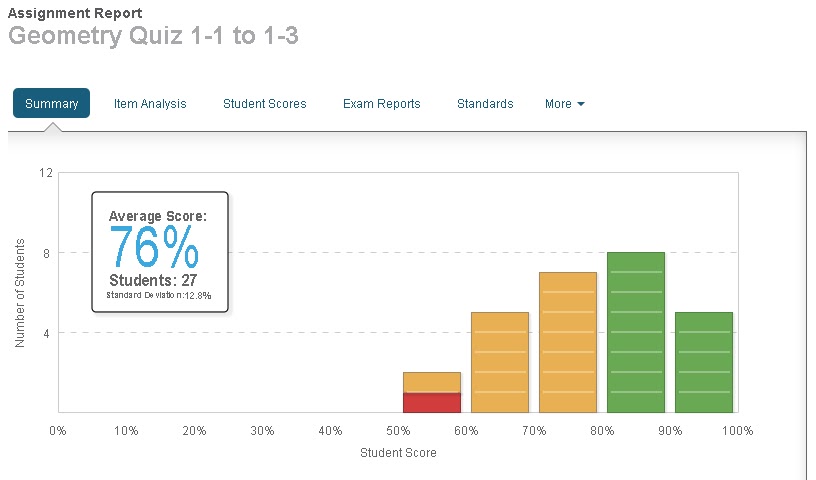 There was an opened ended section as well, but enough of the students left it blank either because they ran out of time or didn't realize there was a back, that I think we'll do that part again on Monday.  I'll let that be my warmup.


The Math 8 kids didn't do as well on their quiz.  The first class had an average of 67% with a standard deviation of 26%  If I discount the student who refused to take it, that probably with decrease the deviation and increase the average, but not significantly.  The second class did MUCH better.  They brought the average for the Math 8 classes up to 74% and, more importantly, did well on every question except for the ones where they had to name the properties of equality.

Comprehension is there! I just need to remind them that they know!

I also REALLY need to be impressing on them that they have to ask questions when they don't understand what we're doing.  I know this is going to be a bit of a "duh" moment for all of the teachers reading this, but the kids who succeed are the ones who ask questions.

After school, I called a few parents about their children sleeping in class or not bringing materials.  The two parents that I was able to speak with were VERY receptive and were very happy to hear from me before things became a problem.

Almost nothing will help a child succeed like effective and meaningful communication, whether between parent and teacher, child and teacher, or child and parent.


Edit:
I found out after school that my geometry kids threatened our tech guy with badness if he didn't get the Promethean Board up and running again.  Kids who love the educational technology enough to threaten adults for it: Priceless.
Email ThisBlogThis!Share to TwitterShare to FacebookShare to Pinterest