Posted by Justin at 4:39 PM
We started the guided notes today in geometry.  The students had an odd mixture of disappointment and relief.  I think the relief came from the fact that we were going to a format with which they are familiar.  Students have been conditioned to expect lecture and note-taking so when things go differently, they are often confused.

Students sitting in lecture remind me of people returning to family who are not nice.  There is discomfort and awkwardness, but there is a level of security because of how familiar the situation is.  You KNOW that your aunt Ethel is going to ask when you're finally going to find someone and settle down.  You KNOW that your uncle Jeff is going to be disappointed that you didn't bring home any hot friends.  Students know that they are expected to sit quietly, listen to the lecture and write down ...whatever.

I hope that by the end of this year, my students will have forgotten these expectations for lecture out of disuse.  I want the "sit and take notes" muscle to atrophy.

So, even with the guided notes packet, I tried to keep the conversation lively and make it an actual conversation.  I've been thinking very much about the idea that I should never say anything that a student can say.  I ask questions that direct students in specific ways and I'm not satisfied with answers until I get the one I want, or one like it.

We talked about points, line and planes and I had students go to the board to answer the questions in their note packets.  I ended with a critical thinking question:

What makes a chair wobble?
I happen to have a chair in my room that wobbles, so I put it on the desk and rocked it back and forth.
I received a ton of answers that were true, but weren't what I was going for.  "The legs are uneven." "The screws came out." "It's unstable!"

Finally, I got what I wanted.  "It means the feet of the chair are on different planes."

We talked a bit about this too and I asked about the two legs that don't leave the floor when I rock it.  One kid actually said "they are in both planes!"

So I ran a string between the two legs, as he suggested.
Me: "Like this?"
S: "Yeah! Everything on that line would be in both planes."
Me: "So what we can tell about where two planes meet?"
Class: "It's forms a line!!"

I was VERY pleased.

I also had my first real discipline issue in that class.  For the past 7 days, one of the students has been doing almost nothing.  He comes in, puts his head down, refuses to do most of the tasks and refuses to engage with me when I talk to him.  He sat through the whole class with his arms pulled into his sleeves.  Today, after asking him multiple times to take out a pencil and get to work and he refusing to do so, I took him into the hallway.  I explained to him that this was a high level academic class and his behavior was not acceptable.  He stared at me blankly.  I asked him what I could do to help him get back on track, that I wanted him to be successful and that I would help him however I could.  He stared at me blankly.

So I called his dad, who was very supportive.  I explained that I wasn't trying to get him punished, but wanted to make sure we were all on the same page with the expectations of behavior and academics.  I think it went well, but we'll have to wait to see if it produces any results.

Pre-algebra is falling back into the habits that I sadly expect of those students.  Today, about 70% did their homework, which is much better than last year, but not as good as last week (85%.)  I quickly did my lesson, which was dull, then had students work independently or in pairs for about 15 minutes and then put their answers up on the board.  They then got time to work on their homework, almost all of whom finished and got their answers checked.

This is really a great group of kids.  I often struggle to determine what is age-appropriate behavior.  How much of the acting out is because they don't know how to behave, or because they are 13.  In high school, I was able to treat them like adults, but here, they are on the cusp.  Some are over it and some won't be for a few years.  It's hard to be fair and treat everyone justly when they are at such different places.

Perhaps that will be the topic of next week's #MSMathChat.

I've been thinking about procedures.  A few comments from Kate Nowak on Twitter today got me thinking about why we ask kids to do things in a certain way.  Sometimes it's because it's the only way to do it correctly, like Order of Operations, but sometimes it's because it's easier for us to give them steps and see if they can follow them.  But by the time they get to middle or high school, is there still educational value in that?  If they haven't learned it by then, maybe there's something else going on.

Also, I want to draw a distinction between not wanting to follow directions and not being able to.

I think there is a third reason for having do something procedurally.  This came up today when I asked my students to follow the steps I gave, not because I care how they solve a problem, but because I've been teaching long enough that I know where the common mistakes are and the steps help to avoid those.

I'm not opposed to making mistakes and there is great value in learning from them, but when the notation the students are using leads directly to the confusion, I think it's important to at least provide them with a road map until they can find their own path.  This is the example that has been coming up recently. 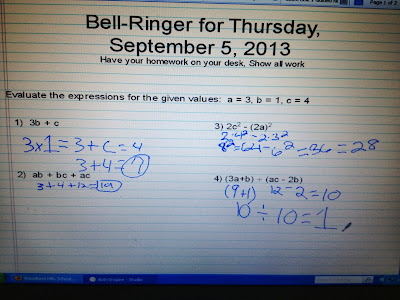 Clearly the student knew what he was doing and got the right answer.  My concern is the string of equal signs.  As the problem gets more complicated, this type of notation will start to trip him up, and it did 5 problems later.  I don't want to impose my own procedural preferences on them, but I also don't want them forming habits that will hurt them later.

This is a very fine line...
Email ThisBlogThis!Share to TwitterShare to FacebookShare to Pinterest