Day 7: Success and Not So Much

Posted by Justin at 4:29 PM
The geometry warm-up today was the first real foray that we've done into points, lines and planes, which I should have started last week.  As usual, I got a little off-topic while talking about the concepts of dimension and how the students can't conceive of a creature that lives in 4 dimensions because we only exist in 3, etc. 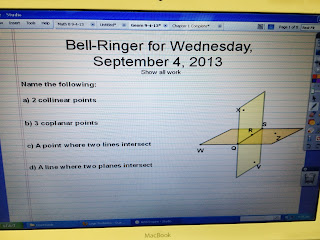 The students did very well and were eager for more discussion, but I had to reign them (myself) back in so that I could get to our activity, which I LOVED!

Students were broken into pairs and asked the following:

How many distinct lines can be drawn using:

I didn't give them any other directions and when they were confused, I asked directed questions.  I walked around the room, watching the strategies that different groups came up with.  Several pairs realized early on that there must be a pattern and tried to find that, instead of trying to draw lines between 12 dots.  I was even lucky enough to have a few pairs think back to what we had done previously and utilize that. 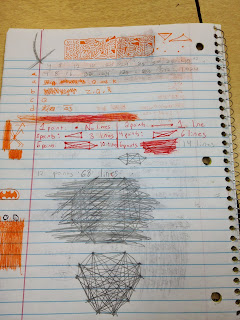 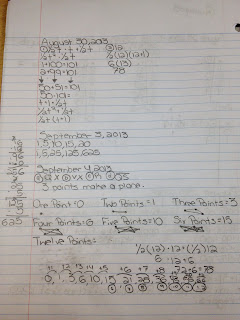 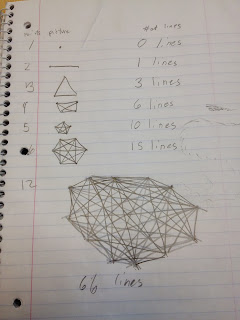 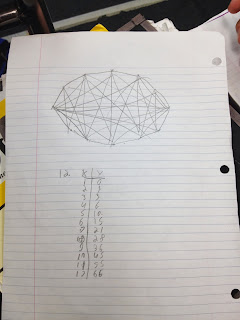 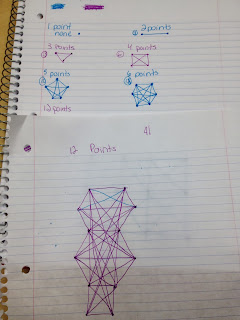 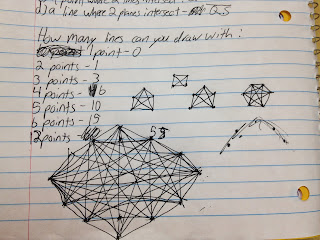 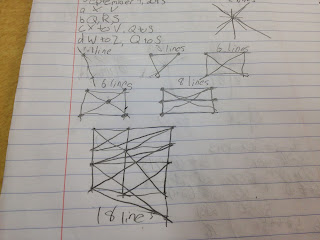 **sniff sniff**  I'm so proud of them!
There was a ton of great thinking going on.  Even the students who came up with wrong answers managed to develop theories on how to find further numbers in the pattern without drawing.

At the conclusion of the activity, I had students come up the board and draw what they had done.

Me: "For 3 dots, why did you put them in a triangle pattern instead of in a row?"
S: "When I put them in a row, some of the lines overlapped and it was hard to count them."
Me: "Did you find a way to draw the larger ones, like 5 and 6 points, so as to avoid overlap?"
S: "We made them around the outside of a shape, instead of a box with some points inside, like we had at first."

I emphasized to them that I was looking for them to be able to not only find the answer, but figure out how to do that as well.  Outside of school, they won't always be given step-by-step directions on how to complete a task.

In pre-algebra, I stole an order of operations activity from ray_emily with some modifications from the amazing Julie Reulbach.  Students were given laminated cards with operations and parentheses on them as well as one that read:

It was a great activity, but not long enough.  The groups worked on it well, but I vastly overestimated the attention span.  The students who finished quickly were given more difficult numbers to reach and dove right in, but when they couldn't find the answer in 20 seconds, like they did with the first ones, they gave up.  At some point, I realized that the constant redirection to task was counterproductive.

I didn't give them a time limit because I didn't want to intimidate the students who were taking longer, but I can see that was a mistake.  Next time, there will be a time limit and I will ask someone to put it on the board and someone else from that group to explain the work.

Interestingly, the girls (who took longer for each problem) persisted while the boys (who finished quickly) pretended to work, but were talking about basketball.

In the second class, it went MUCH better.  I walked around the room and each time a group solved a problem, I gave them all stickers.  This spurred the other groups to find the answer as well.  "I WANT A STICKER!!!" "Then solve the problem."  "C'mon, y'all! Let's do this!" 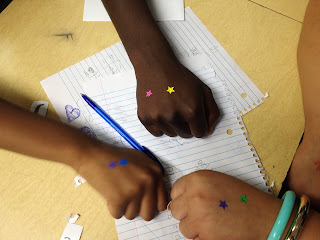 Never underestimate the power of bribery, even with silly little star stickers.

When I do this again, I will add a sheet for them to record their work with the 18, 2, 4, 3 already written so they add the operations, with enough room for them to justify their answers.  I will also do a better job of separating problems into ones of easy, medium and hard to make sure that students do problems of increasing difficulty.  In theory, they will get the easy ones quickly and the difficulty will slowly build so they don't get discouraged.

Come to think of it, that's a good philosophy with ANY activity I do.


My guided note packets finally arrived for geometry.  One of my students saw them and the following conversation ensued:

S: "Does this mean we have to do real geometry now?"
Me: "Dear, we've been doing real geometry this whole time."
S: "I know, but it hasn't felt like it.  It's been fun and interesting."

This makes me very happy and very sad at the same time.