Posted by Justin at 4:38 PM
In geometry, I used an extension of yesterday's warm-up for today. 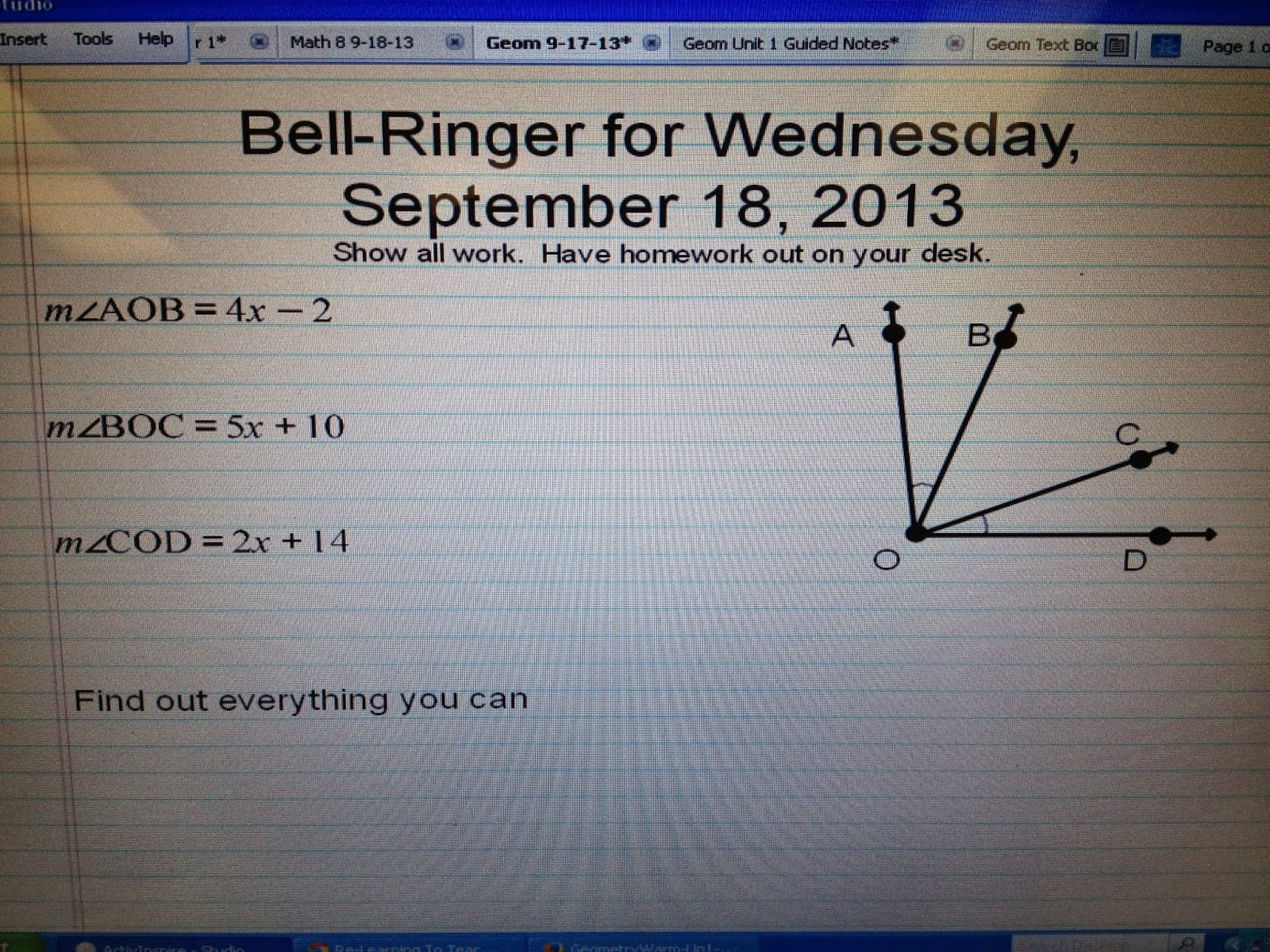 The ensuing discussion was excellent.  Some students we claiming that a certain angle was obtuse, while others argued that we didn't have enough information to be able to tell that.  For much of it, I was able to step back and simply moderate, rather than lead.  THIS is how learning happens!

Anyone who is not native to the English language would have tremendous difficulty with those last two sentences.

Since we are behind in the prescribed curriculum, I had flipped my class and assigned the guided notes as homework.  As a result, we were able to fly through them with the students filling in the blanks with only minor tweaks from me.  I was able to spend more time clarifying misconceptions rather than explaining basic concepts.

I introduced the next Mathalicious project and sent them on their merry way.

In pre-algebra, the honeymoon period seems to be over.  It's becoming more and more difficult to maintain order in my class the way I would like.  Much of this comes from students being overly familiar and speaking to me as though I am one of their peers, or at least, not an adult.  Many of them seem to be used to existing in a world without consequences or repercussions.  As a result, they seem confused at my reluctance to answer their questions when they have spent the entire period either asleep or talking to their friend.

I explain my reasoning to them as best as I can without anger or frustration, but I know it slips out.  I try to explain that I need to spending my very limited time with students who were not exceedingly rude to me.  Then I pull them aside after class and talk to them about their decision making and how could we have handled that situation better.

Several of the personal relationships that I was trying to cultivate have turned into student thinking that they can walk all over me because I am concerned about their parents or siblings.  I have one student who does everything I ask of her, but constantly has a look on her face that says "You and everything you do is stupid." I let it slide because she's never rude to me and she completes her assignments well, but it does irk me.

I had students put problems on the board and then explain those problem to the rest of the class.  I've seen a few videos where teachers have designated whiteboards around the outside of the room where students will put up work, rarely sitting.  I like this idea, but the physical limitations of my room make it impractical.

I had so many great ideas for this year, I think I blew a circuit.  Every day I come up with something else that I want to do with them, but the sheer number of ideas is overwhelming and I end up suffering from Three Stooges Syndrome.

I need someone to make a list that I can work from.