Day 24: Square the Circles, or Intimations of Insanity

Posted by Justin at 4:24 PM
As I wrote on Thursday, I was disappointed with the quiz performance so I allowed all of my students to take their quizzes home and make corrections.  When they came in today, there was a new answer sheet on their desks and the warm-up was to transfer their new answers over.  The geometry kids did well with it.  After putting the new scores in, the class average jumped to 80%.  Students had pages of work justifying their new answers and were very grateful for the opportunity to show what they knew. 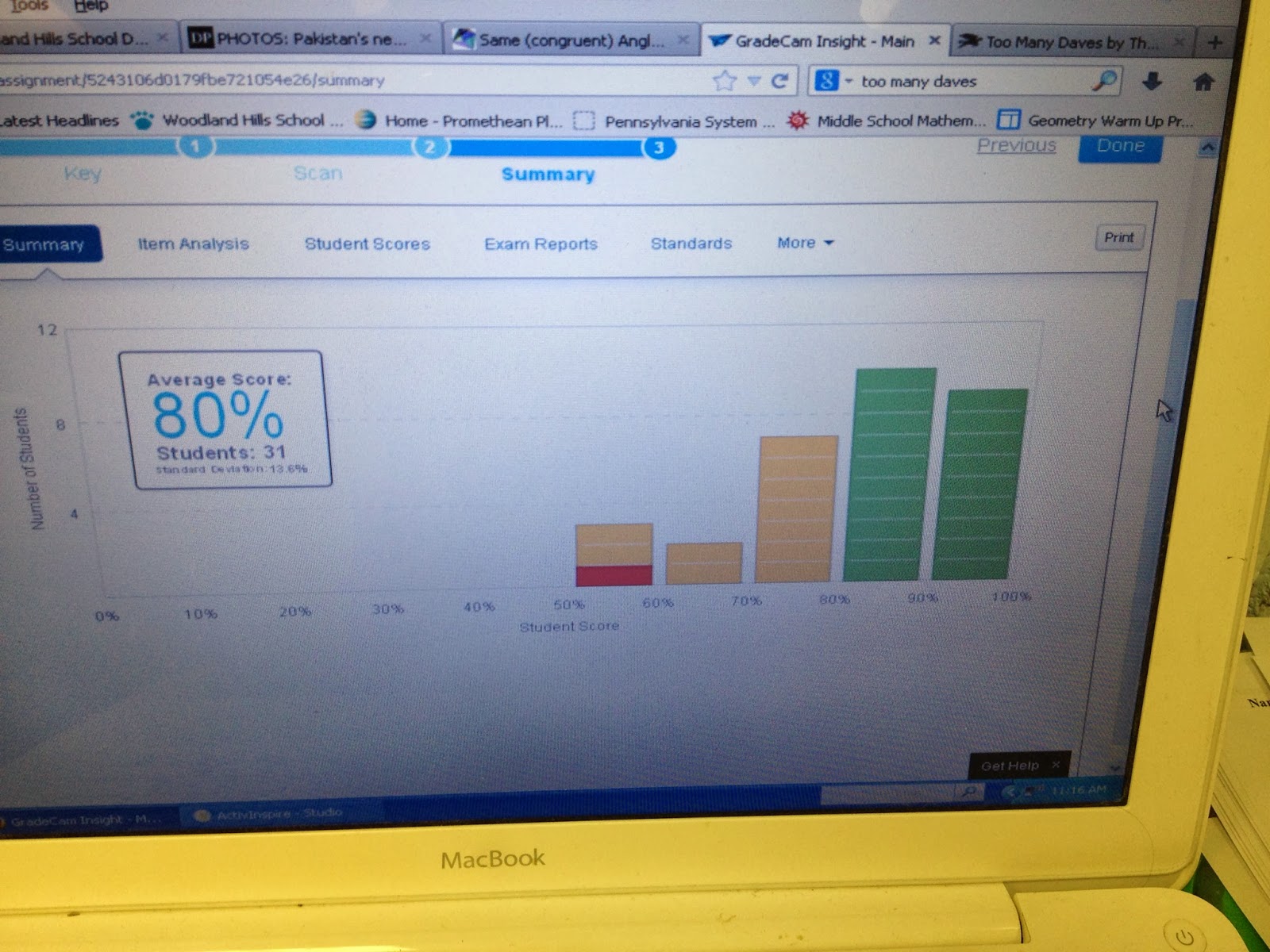 We talked a bit again about how a test does not determine what kind of person you are or your intelligence or value.  Then we moved on to construction.  Anticipating several mechanical issues, I talked a bit about how to use the compass without putting holes in the paper or drawing ovals.  They were a bit rambunctious but excited to be working with their hands.  We went through a few basic constructions together followed by independent practice.

I found some great animated videos to remind me what I was supposed to do.  I had them running on the board while the kids were working as a reference.  I'm reminded how much I love doing constructions and I need to do them more.  I have enough compasses that we can do them even if everyone is present!

Tomorrow, we're going to finish up the section on polygons and begin test review for the chapter test this week.

In Math 8, I once again made the mistake of not planning something.  I'm having tremendous difficulty moving on since their skills are not at a point where I can do so.  Some of the students are ready, but the majority are not.  They are still having difficulty with basic concepts of subtraction and problem solving.  I HATE just giving them more practice, but they need the practice and I don't know how else to get it into them.  I've had activities that deal with order of operations and subtraction of integers, but I've run out!  The disparity in the skill level is SO wide, it's like I'm teaching 3 different classes.

The kids who are behind are there, primarily, because they refuse to do work.  Giving them MORE work isn't a solution and, since I am not a 5th grade teacher, I don't have a collection of activities on their level to give them the practice that they need.

I am not blaming them.  For the most part, I know that their lack of willingness to do work stems from their frustration.  I'd like to show them success to help them see that if they would just DO what I ask them to, they would be where they want to be.

Then my own frustration comes through and I think "If I wanted to be teaching these skills, I would have earned my certification in elementary."  I don't feel equipped to help students who can't perform basic operations.

In any event, about half of the pre-algebra students didn't bother to revise their quizzes from Thursday and, of the ones who did, about half of them actually got a worse score.  I was so annoyed at them squandering the chance to show off their knowledge that I ended up reading Too Many Daves to them and we had a discussion about planning ahead and time management.

The analogy that I used was about push-ups.

I have a few topics for tonight's #MSMathChat that involve motivating students who don't care about knowledge OR grades.
Email ThisBlogThis!Share to TwitterShare to FacebookShare to Pinterest