Day 16: Off Topic and Proud

Posted by Justin at 4:43 PM
Geometry did not go as planned.  Instead of covering the concepts intended, I ended up on an hour long lecture that dealt with various topics including bullying, the importance of education, overcoming financial hardships, the difficulties of potty-training children, why they don't have recess or breaks, thermal dynamics, goal setting and the concept of genius hour.

I know that I've written before how I wish I didn't have to follow a curriculum and could just teach the kids what they wanted to learn.  Today, I did that.  I had their full attention for the entire class.  They were engaged, asking insightful questions and having well-considered discussions about the consequences of actions.

Just as the bell rang, one of the student said that she felt she learned more in that one period than in all of her other classes.  As much as I wish it would have been about math, I'm perfectly alright with what happened.

Without 15 minutes left in class, we finally got to the warm-up.  I was particularly proud of this one. 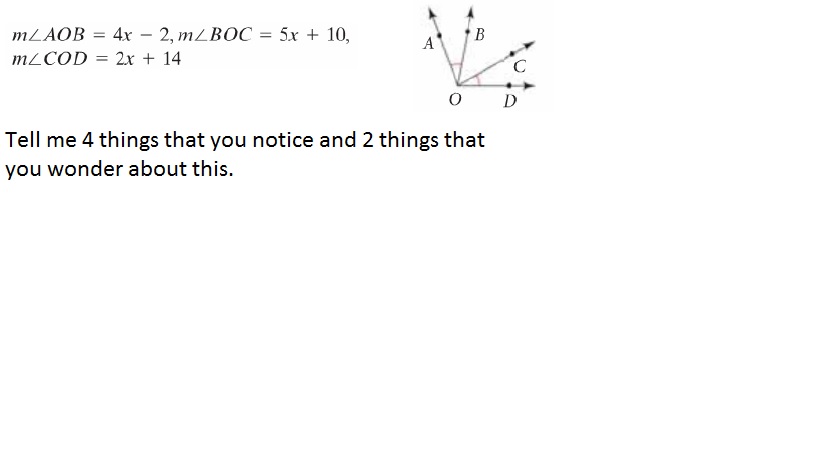 Of course, I forgot to take a picture of it...

Most of the things they noticed were math related, along the lines of "there are 4 rays" and "they meet at a single point."  I was REALLY hoping that someone would notice that I didn't ask a question, but they didn't.

"I wonder if they are all on the same plane."  If it wouldn't have gotten me immediately fired, I could have kissed him!  What a great thing to wonder! I'm really excited to start working in more than 2 dimensions with this group.

In pre-algebra, we continued our discussion of adding and subtracting positive and negative integers.  Since I had talked about it in terms of money and in the more abstract sense that it is traditionally taught, I thought today should be different.  I gave out bags of red and yellow beads.  I explained that the red beads were negative and the yellow were positive.  Then we did a few problems together of increasing complexity.  Many of the student really grabbed onto the idea and liked that they had a physical object to touch.

Normally, I do this lesson while talking about the Zero Pairs Principle, but I think introducing that term needlessly complicates a very simple issue.  A red and a yellow cancel each other out.

I have been known to do this lesson with poorly drawn pictures of sharks and surfers.

The second section did not go as well.  There was a small group of students who were unable to control themselves and, much to the annoyance of myself and the other students, held the class hostage.  We were able to get through some of the examples that I wanted, but not all.  I moved a few, but it seemed to only made it worse.  Attempts to call parents were received by a cheery operator explaining that the numbers were out of service.

The students who WERE paying attention and trying to do the work seemed to really enjoy the concept of the beads, much the way they did in the first section.

In other news, I was approached yesterday by a non-teaching faculty member who wanted to know my secret to being happy and calm all the time.  I had to honestly tell her that I was faking it, that I was almost continually in a rage of frustration and annoyance at the behaviors of the students when they are NOT in my room.  We talked for a while about how to cope with various situations involving non-compliant students as well as mixed messages from administration.

For many people, this district is a rude awakening.  The outward appearance is often VERY different from the reality and the learning curve is VERY steep.  That's not to say it's an awful district by any means.  We have strengths and weaknesses like anywhere else and there are some amazing students and some unique opportunities here, but it's not for everyone.  If I can help someone deal with the pitfalls of being here, I will do so.

I opened my class for her to come observe whenever she would like because I think my classroom management is effective for this environment.  She will taking me up on this on Thursday.  I'm hoping that, in addition to finding something valuable in what I do, she is able to provide me with some outside feedback.

It's impossible for anyone to improve their craft in a vacuum.
Email ThisBlogThis!Share to TwitterShare to FacebookShare to Pinterest