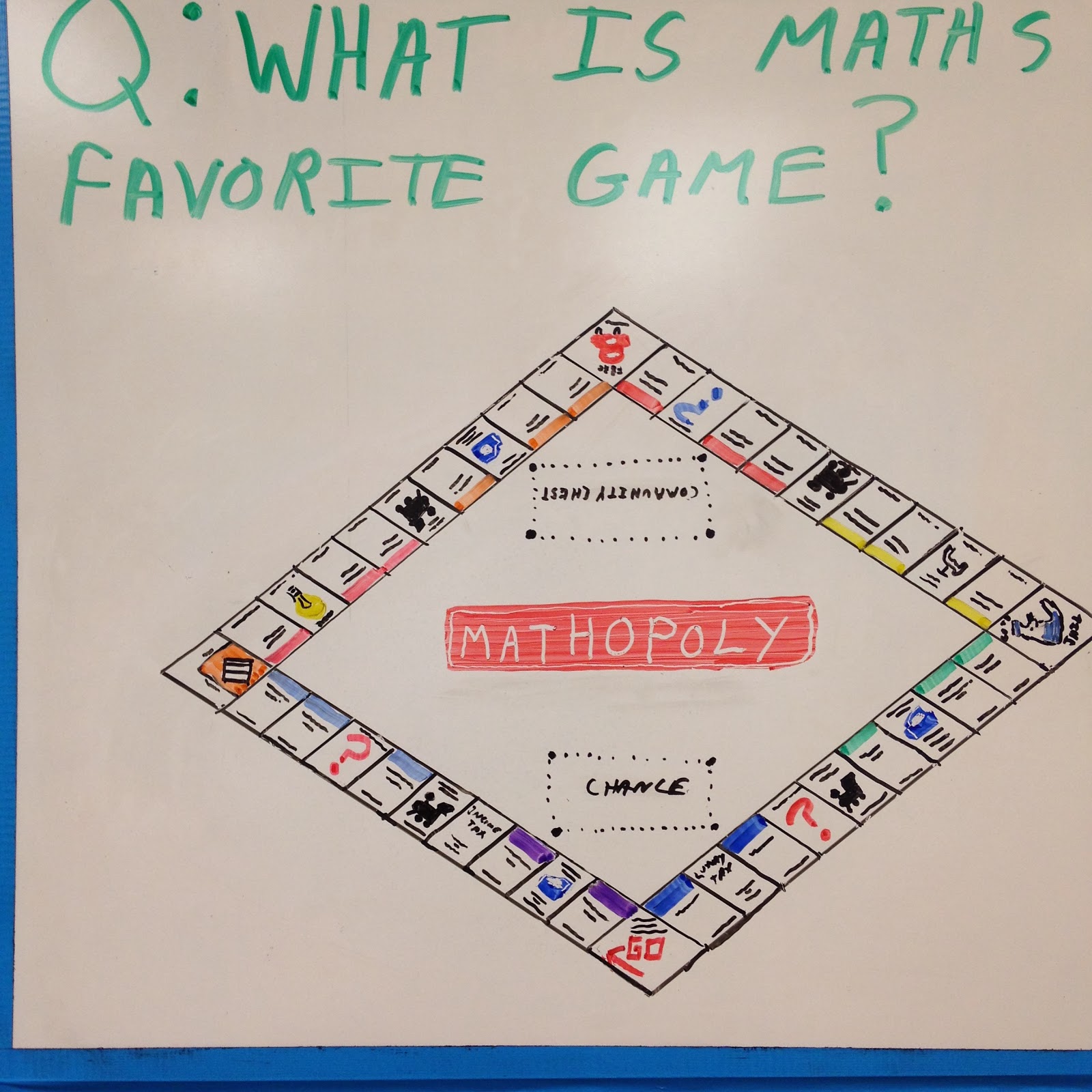 I have no coherent plan for my classes.  At some point, I'll write a longer post about curricula, but that won't be today.  I have a general idea of my goals.  I want my students to be able to leave my room as better critical thinkers than when they came in.  I'm finding myself caring MUCH less about the mathematics than about the problem solving skills.  To this end, I have been mixing up my activities, not letting anyone get too comfortable, but still feeling safe.  I want them to be able to adapt to whatever situation they are thrown into and find a way to deal with it, work through it and find a satisfactory solution (satisfactory to them.)

So today was game day!! 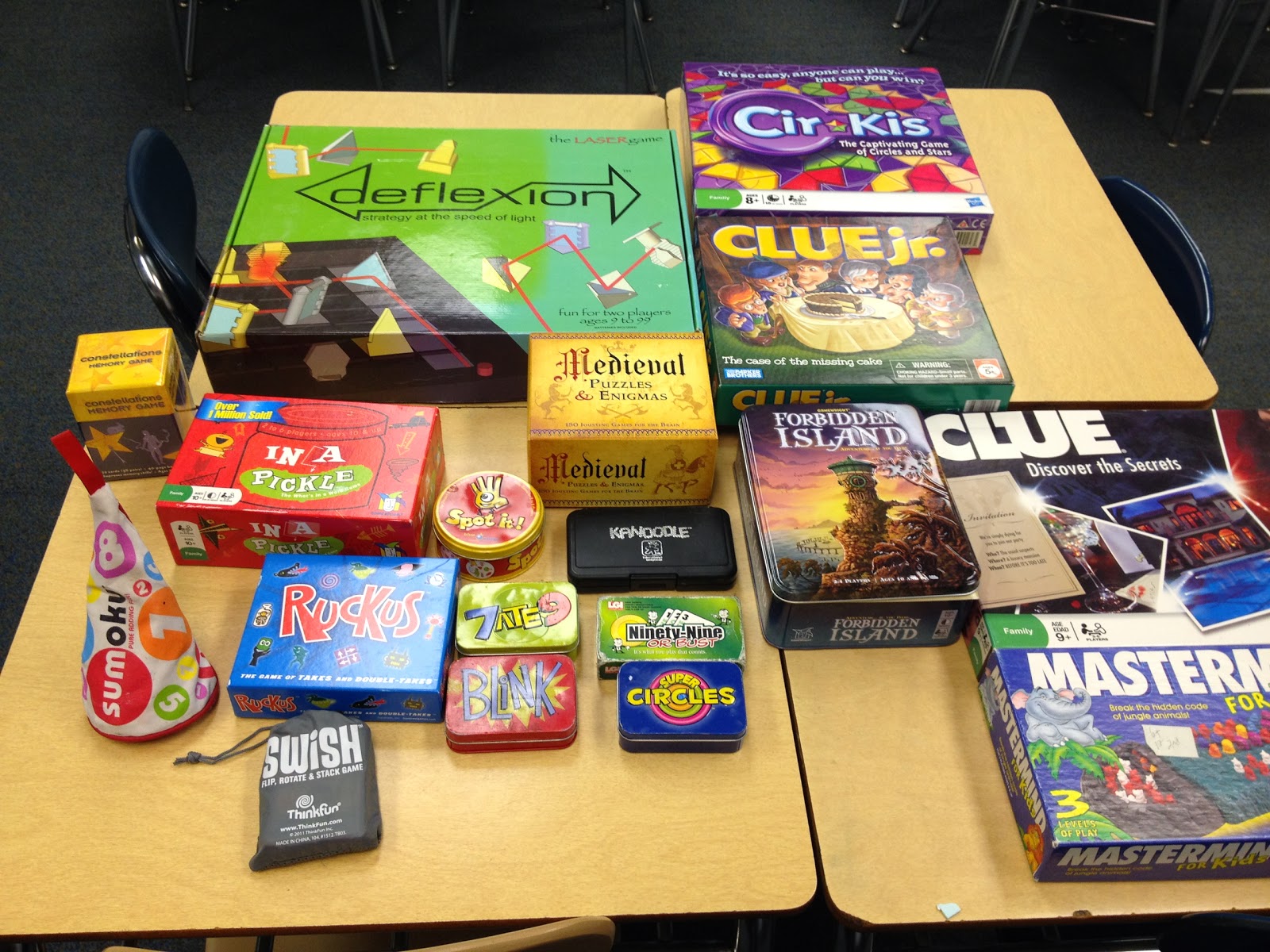 I have quite a collection of games on various topics, but all basically surrounding logic, planning and strategy.  Several of them are pattern recognition and identification as well.  Most of them are chosen because they are more obscure and I want kids branching out and learning new games, developing new strategies.  I gave a very brief introduction to each game and then used ClassDojo to pick students at random to choose the games they wanted to play.

In geometry, the engagement level was 100%! 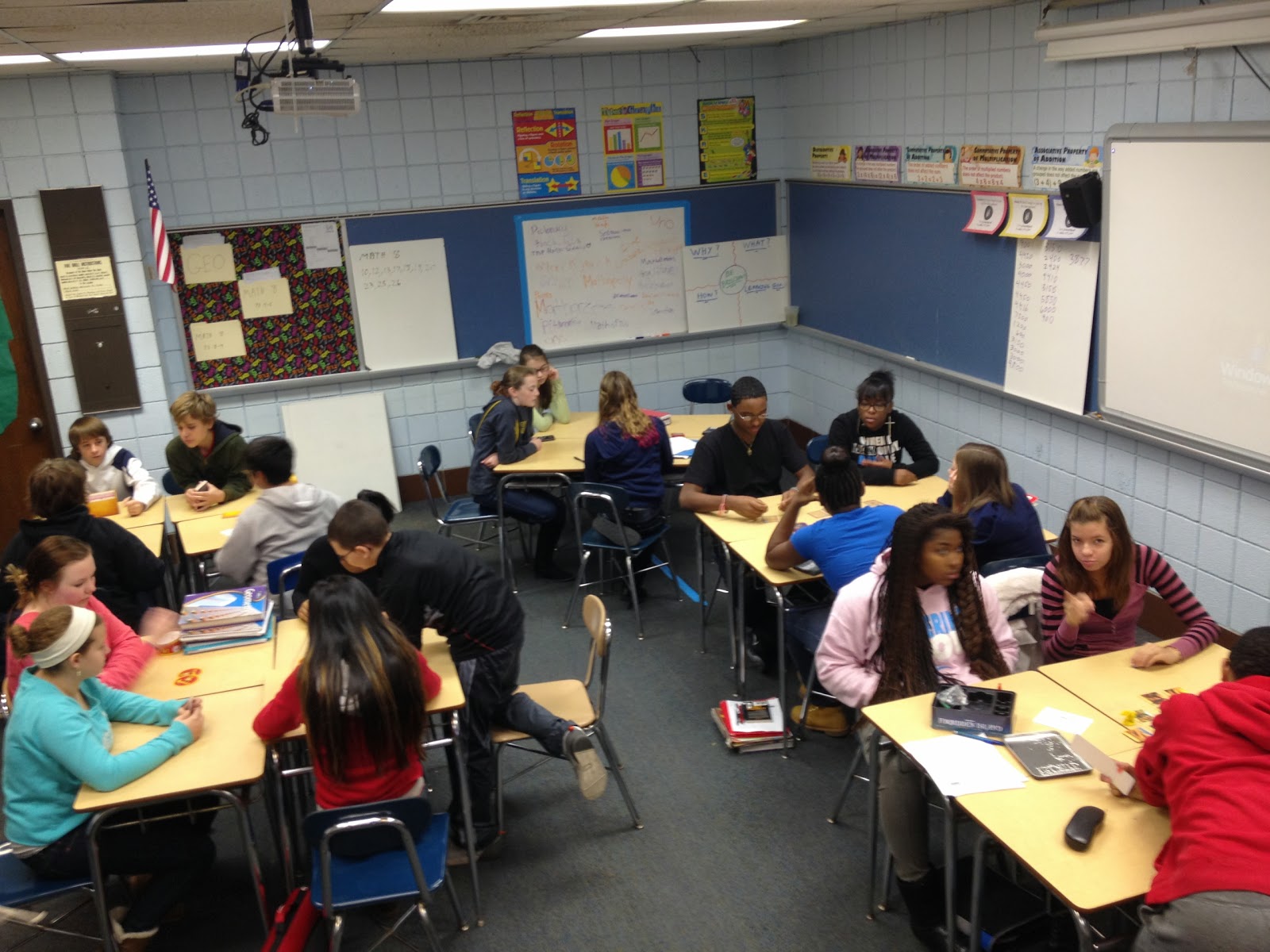 Students persisted in learning the rules of complicated games because it looked cool and stuck with them until the end.  There were cooperative games, and competitive games, group games and solo games!  The games range from concrete mathematical skills to abstract linguistic skills and more.  Students had a great variety to choose from and if they didn't like one, they went and picked another.  They did an amazing job of taking turns and joining groups they wouldn't normally join so they could try out a new game.

They took the time to patiently explain the rules of games to others as they joined a group. 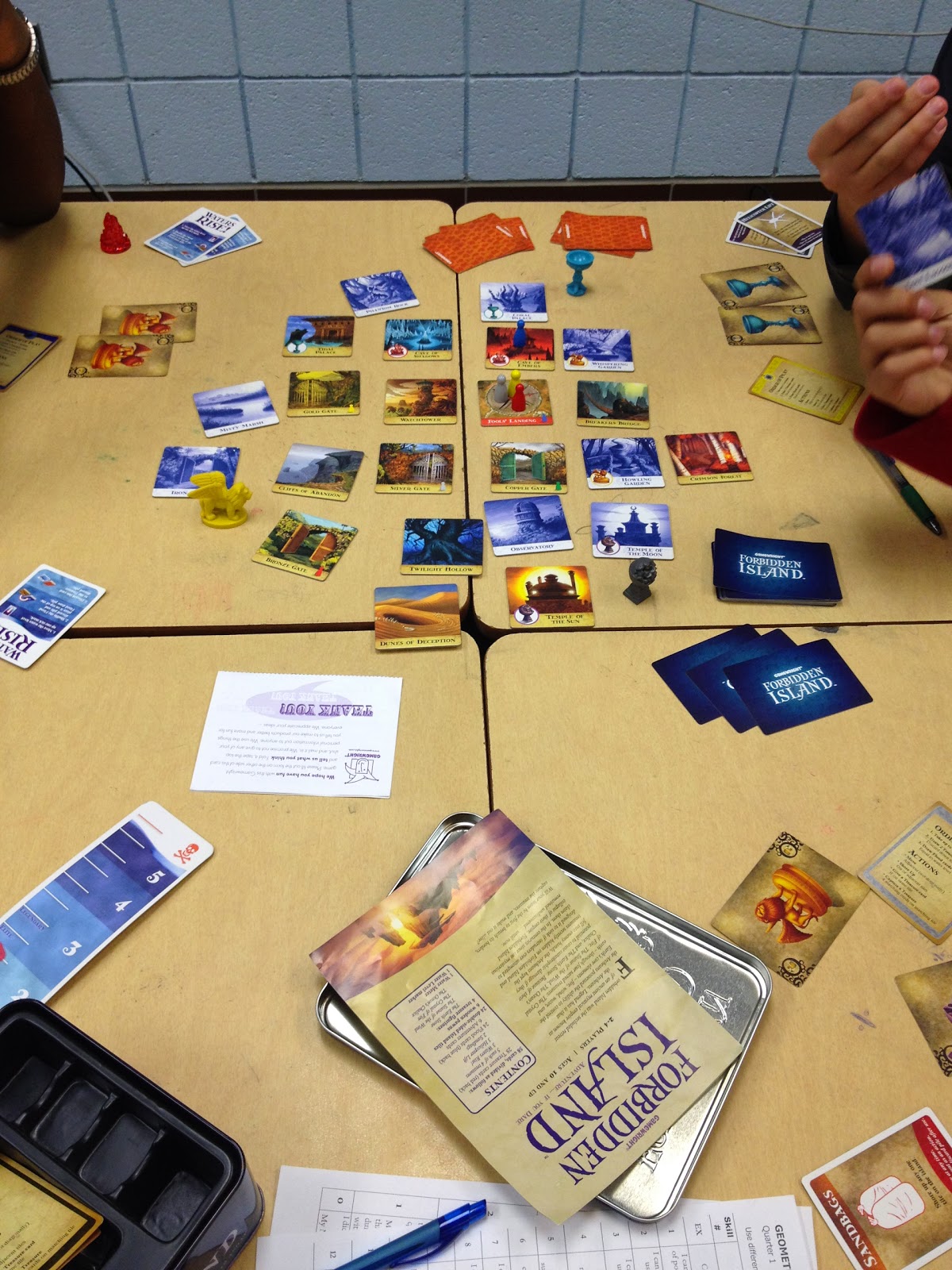 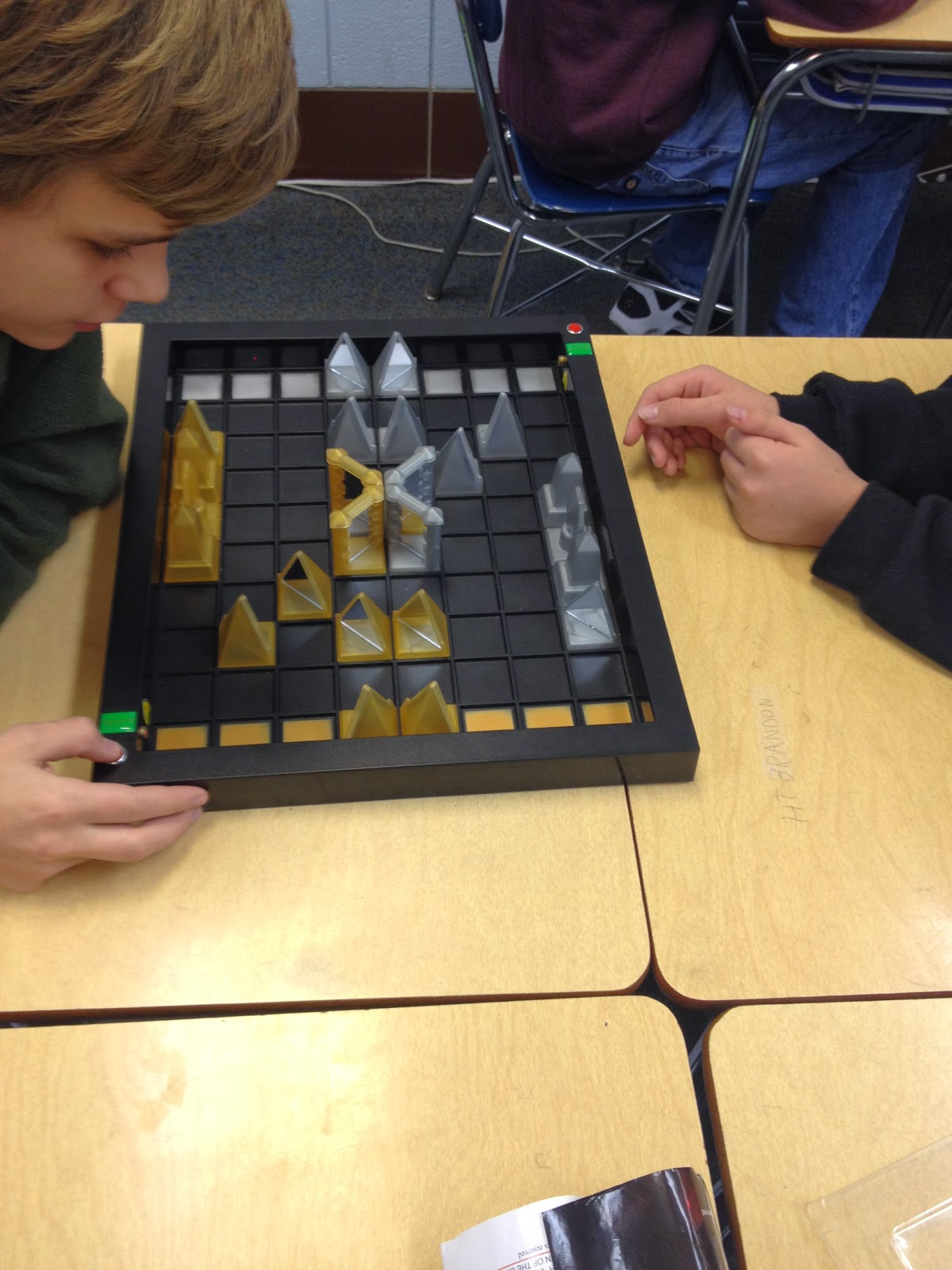 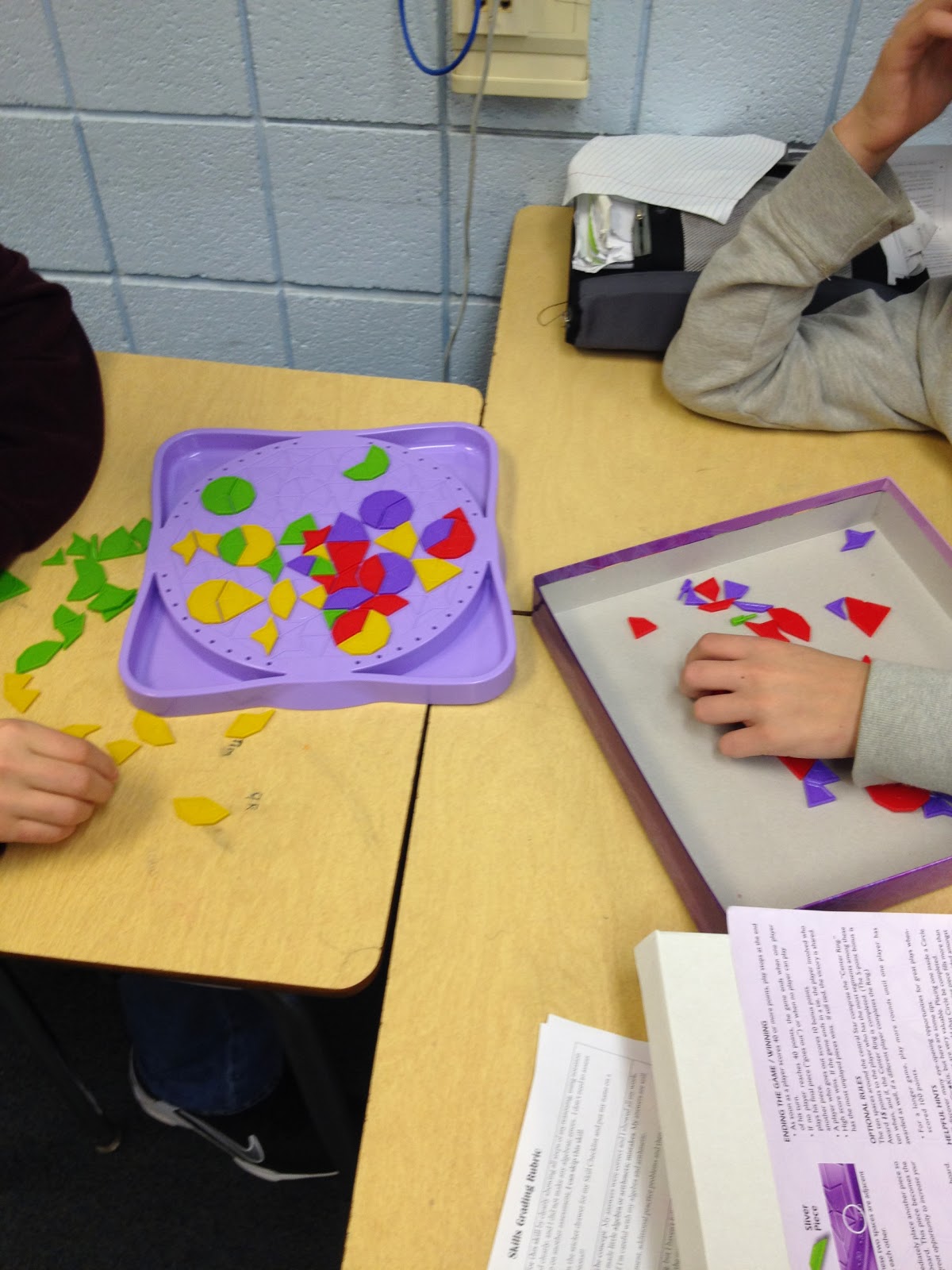 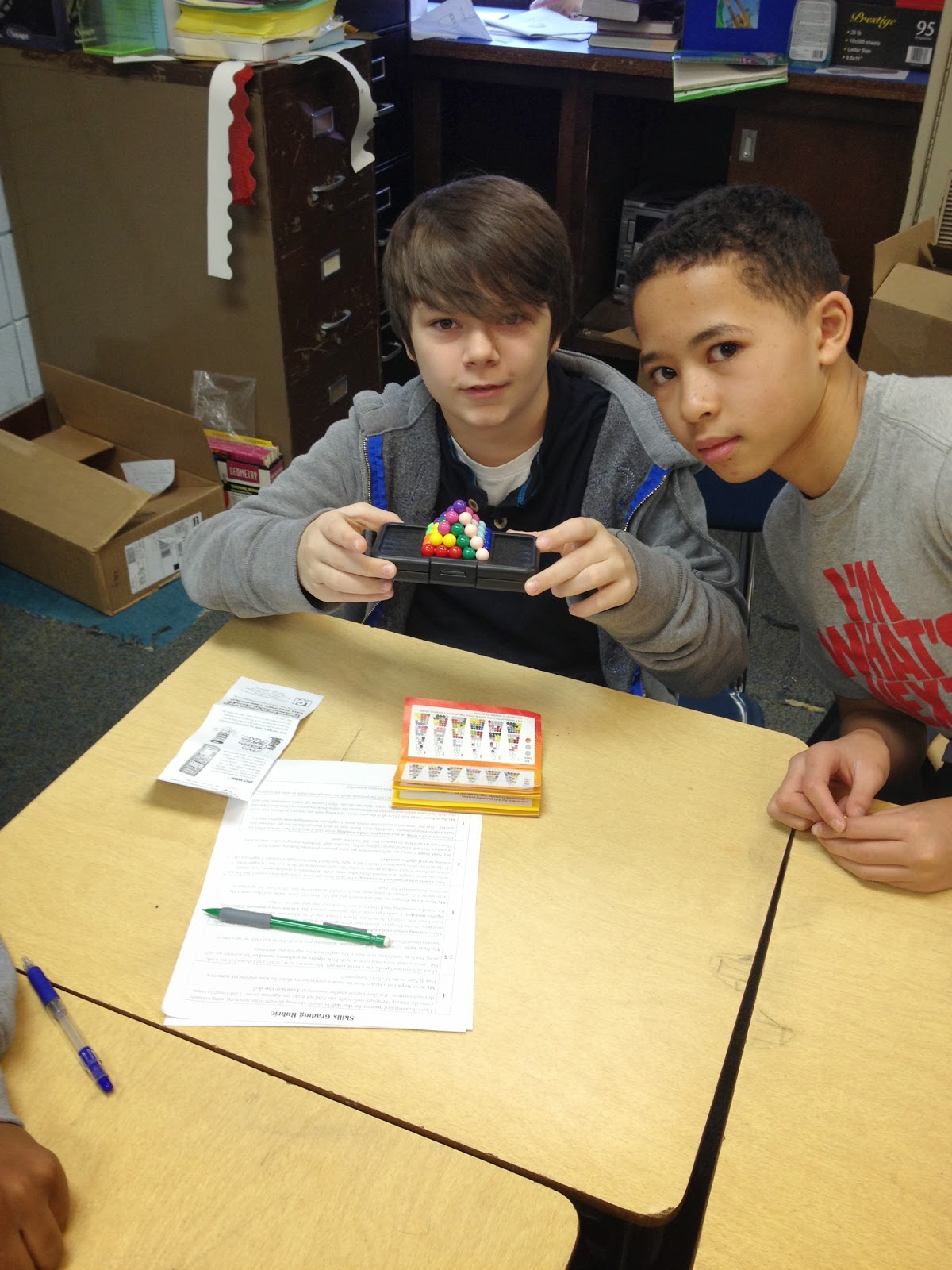 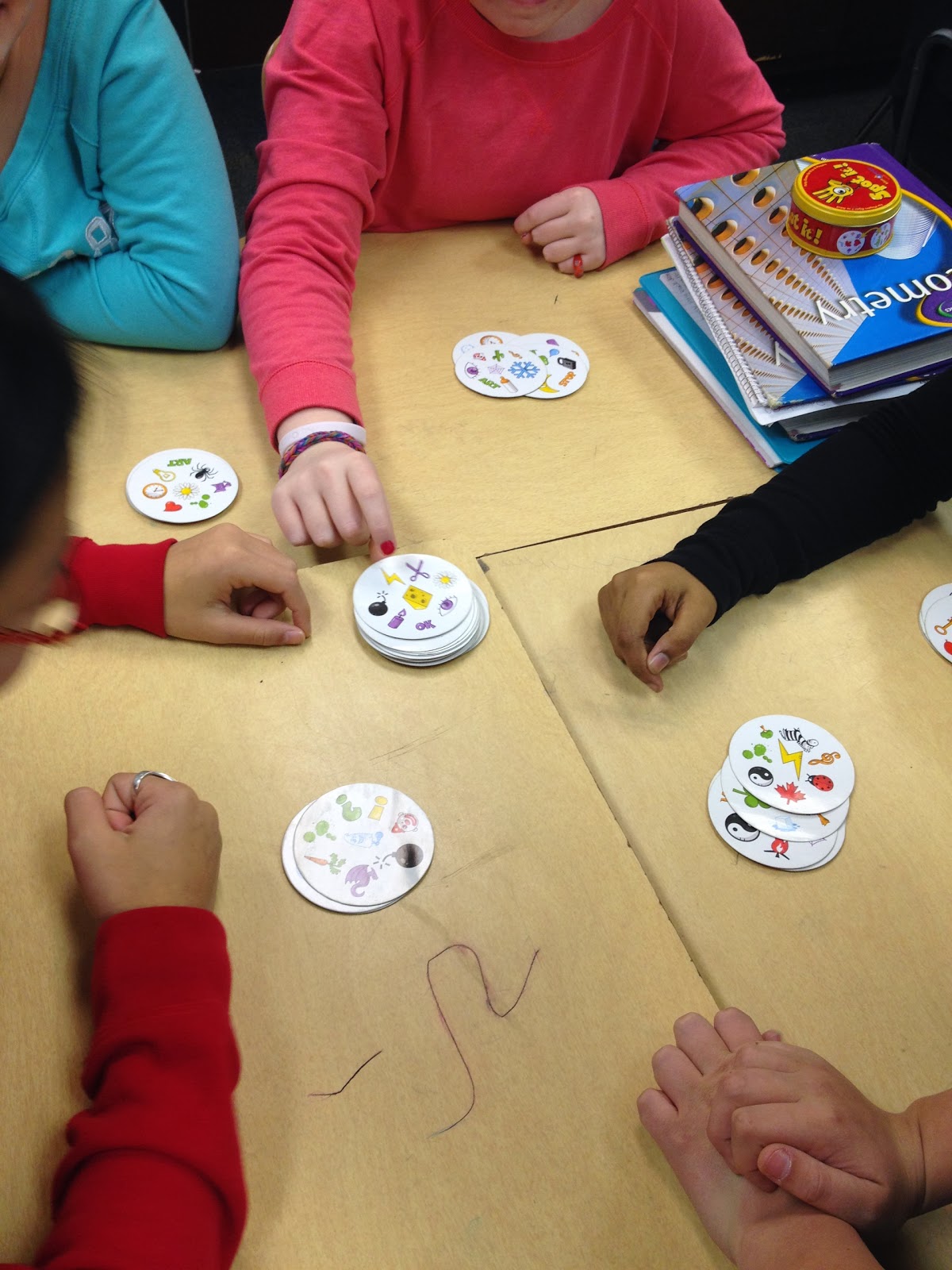 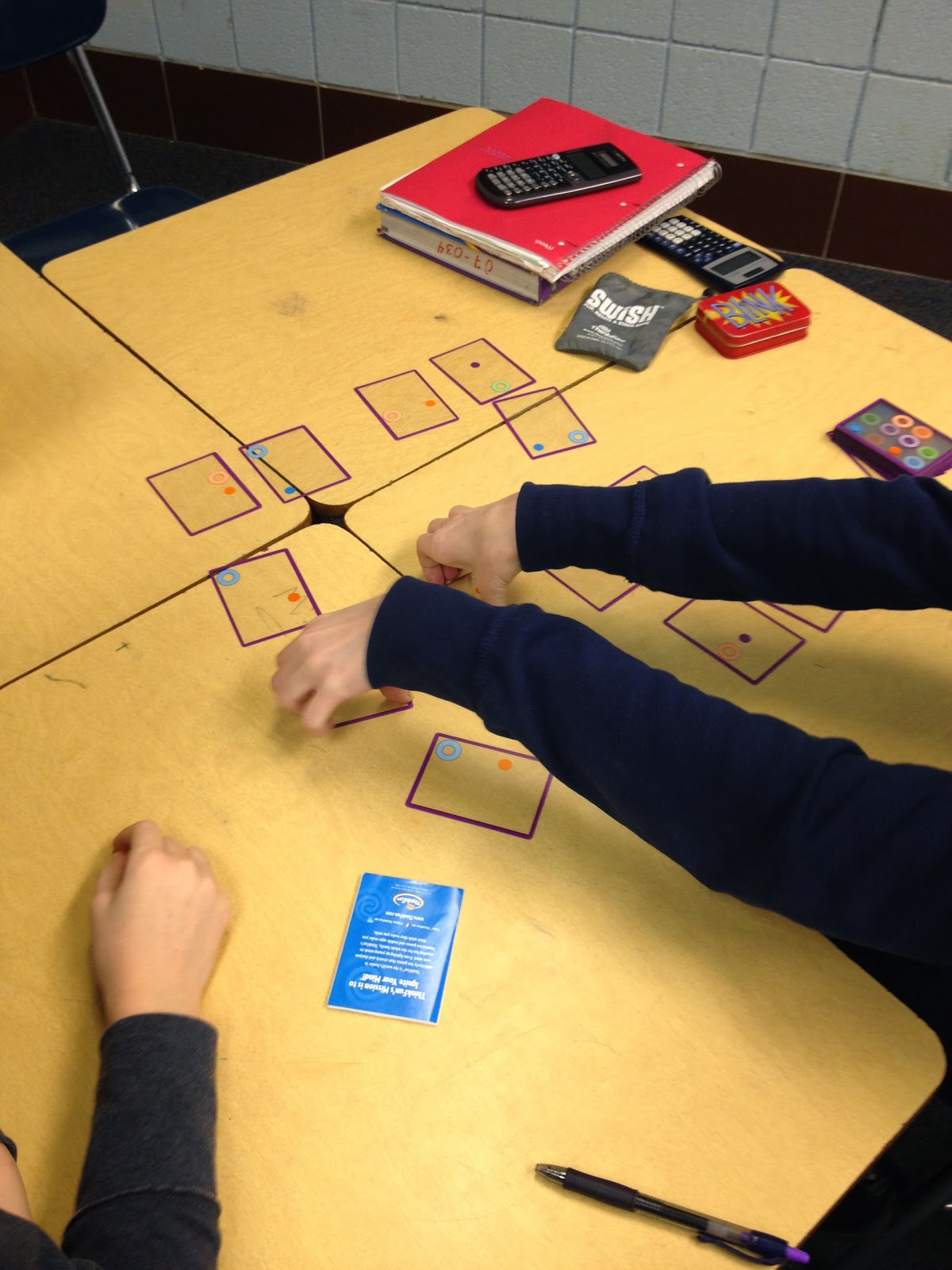 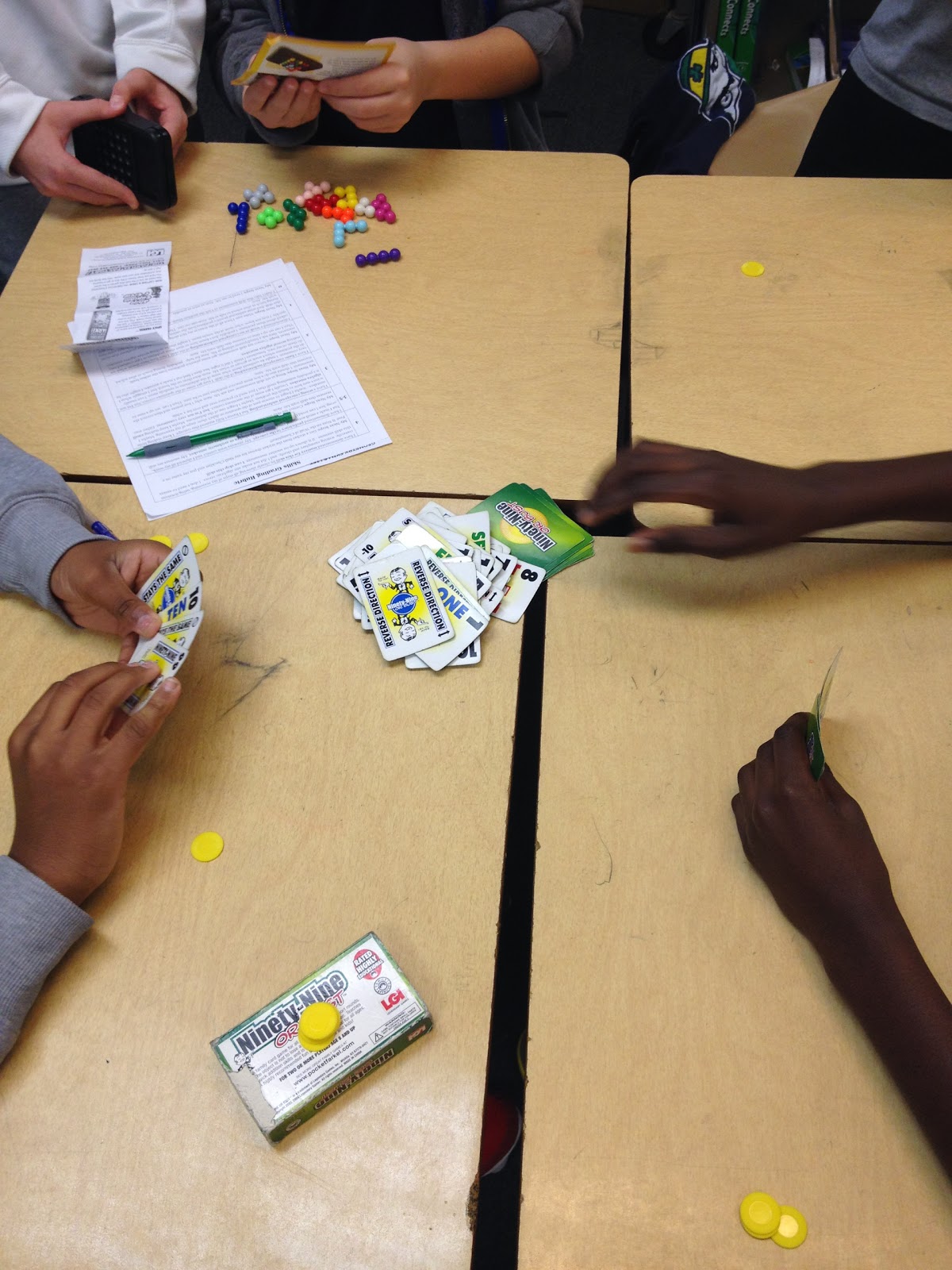 In pre-algebra, the students worked with EXACTLY the same level of persistence that they display with everything else they do.  The kids who give up easily on my assignments gave up and moved to another game when the rules took too long to understand.  The kids who work hard and persist in my assignments, regardless of difficulty, stayed with their games until completion AND chose more complicated games.

I may not be up on my educational theory, but I think this may be a great counterexample to the idea of "engagement."  If I have students who never engage, regardless of  my lessons or activities, then those clearly there is something else at play other than how "engaging" my lessons are.

At the same time, several students didn't want to take the time to read the instructions or find out how certain games were played, so they made up their own rules!  It was fascinating to see how these games, many of which they had never seen before, could be played in ways other than intended.  I think this speaks volumes for allowing students to explore their environments.


I worry deeply about the thought that ALL students are able to be engaged, if only the teacher were good enough, or able to find the secret formula.

I think there are some students who simply will not engage in the traditional public school setting.  I think there is a place where every kid can thrive and become the best they can, but it isn't always in an environment that I can offer.

With that said, I can never know which kids are the ones who won't engage.  It's always possible that I just haven't hit the right activity or lesson to pull them in.  Also, I have a strong personality and I know that there are some kids who will never work for me, no matter how I try to engage them.  Just because I know that there are kids who will never engage doesn't mean I can ever stop trying.

I have to ALWAYS try to engage every student.  I just can't beat myself up if it doesn't happen.  I tell my students that they should be proud of whatever grade they earn, as long as they worked to the best of their ability.  I need to apply this to myself.

Not every student can get an A on every test in every class.

Not every teacher can engage every student.

But we have to teach as though we can.

Game days clearly need to happen more often.  I have to figure out how.  I can't have it as a "reward" because I think it implies that games are only for rewards instead of as a means to learning.  I might set it up as a station and assign kids certain days while I work with others.
Email ThisBlogThis!Share to TwitterShare to FacebookShare to Pinterest