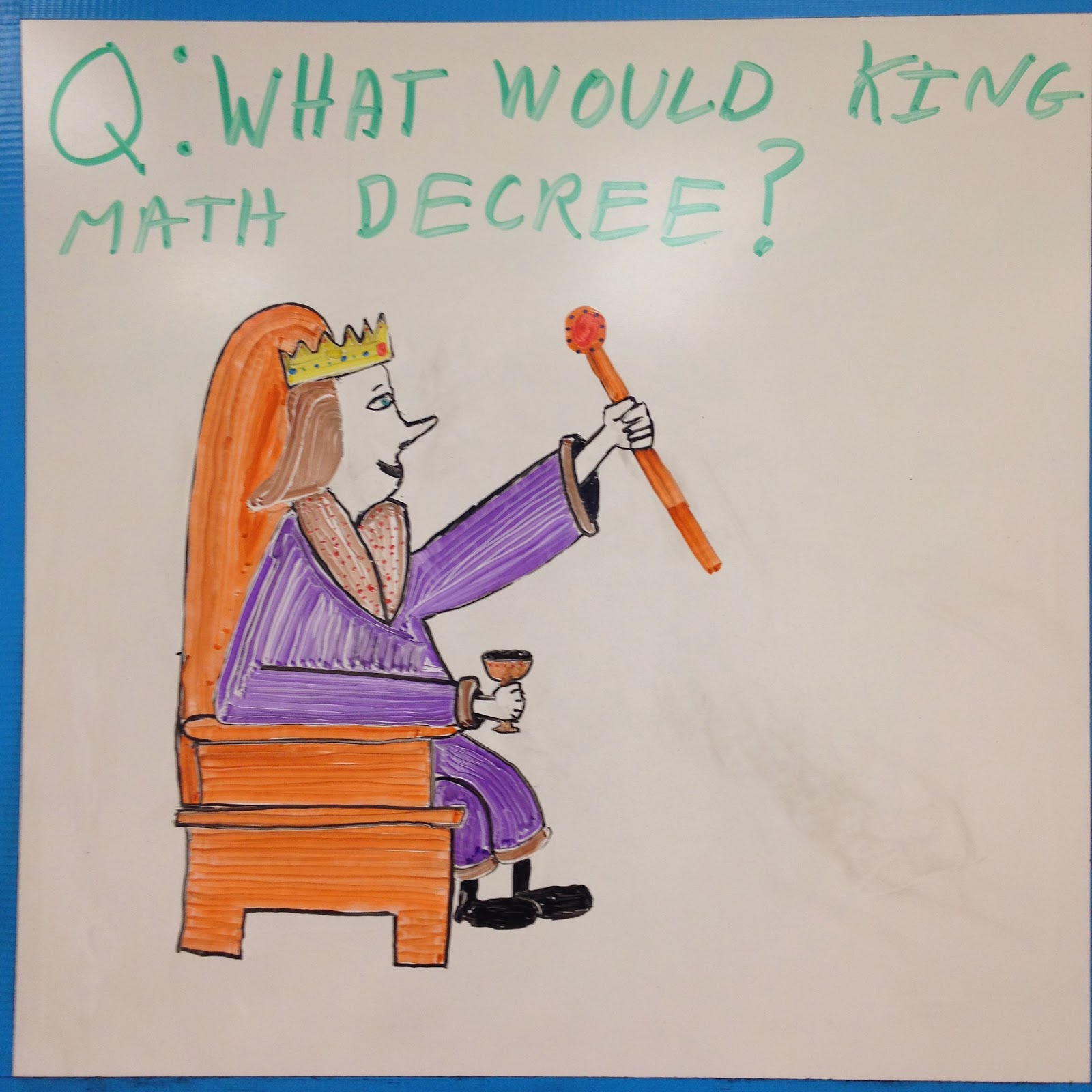 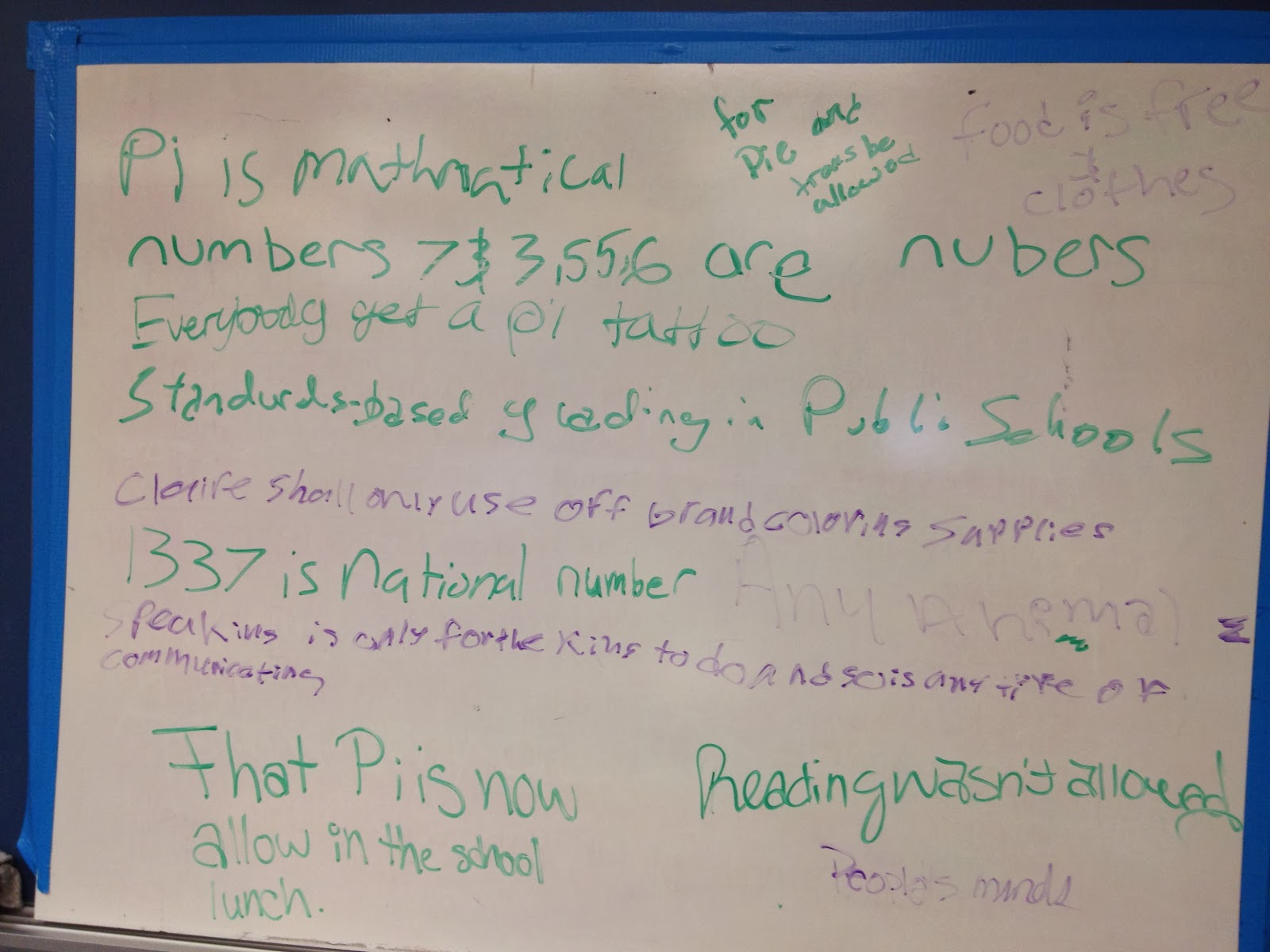 Many of the geometry students did skill reassessments today, with a few improvements, but a several drops in score.  The way that SBG works, they can't UNearn a score that they have earned, so I was a little distressed when students who earned 3's on the first go around earned 1's this time.  Clearly, they didn't actually master the skills.  I need to talk to some of the SBG gurus about what to do.

I don't like traditional grading because it requires mastery at a specific time when mastery the next day is just as good.  The problem I'm encountering, however, is backsliding.  Perhaps, I will only award a score of 4 once a student has shown mastery in a topic twice, or three times...

After the reassessments, they played games.  I truly feel as though I could have game day every day with my geometry students and they would learn more valuable critical thinking, planning and logic skills than I can teach them using a standard geometry curriculum.

Near the end of the class, a few of my students called me over and asked in quiet tones if they could talk me.  They asked if they could take a collection for one of the other students who needs new glasses, but whose parents can't afford them.  They wanted to collect a few dollars from each person in the class and give it to him after break.

I am so proud of them for thinking of this student.  He isn't someone that they spend time with or even really talk to much.  He's not an outcast, but they travel in different circles.  I, of course, will give whatever I can.  I want to be able to support and foster generosity as much as possible.


In pre-algebra, the tech ed teacher joined us for an activity, which I think is SUPER cool!  The students were given a price sheet and asked to design a device that would transport a wooden block across the room on a fishing line.  They could use tape, zip ties, balloons, nails, hooks, etc, but they had to "pay" for each item they used.  They could also run as many tests as they wanted, but they had to pay for each of these as well.

They were to work in teams and the team that managed to successfully move the block across the room with the lowest cost would be declared the winner.

It started out about as I expected.  They were very excited about it, but hadn't fully listened to the directions, so there was lots of clarification and "Did you read the directions?"

One group, rather than read the directions (which were, apparently, "too much") they put their heads down.

Several groups got REALLY into it, arguing over the best designs.  Others just sat and stared at the wall.  When I asked them what they were working on, or how they planned to move the block, they replied with familiar statements about how it's too much work.

After about 30 minutes, things started to fall apart quickly, with students hitting each other with inflated balloons, sabotaging designs from other groups and just generally reminding me why we don't often do projects.

I'm also once again reminded about how much less complicated my 4th period class was before it was doubled in size.  The social dynamics in there now are more confusing than I have seen in a long time.  Everyone seems to be friends with everyone else, so it doesn't matter where I move people to separate groups.  They simply form new groups.

It would be so much easier to go back to rows, having all of the students facing the front while I lecture.

I think it might even work to put the pre-algebra students back in rows, but the geometry kids would miss out.  Plus, I don't know if it would work for the pre-algebra.  It might be making it easier for me, but worse for them.

I don't know how to get them to understand what I'm trying to do.  I never have to yell at the geometry kids to keep their hands to themselves, or not throw pencils at each other, or not steal each others binders.

And then, just as I'm about to condemn the activity, throw in the towel, I'm reminded that activities work differently with different groups on different days.

My 8th period ROCKED the activity!  They worked hard, built well, analyzed their mistakes and made corrections.  It was a pleasure to work with them today.  They will get a chance to work on this again tomorrow.  I wonder if it had anything to do with certain students being absent today...

4th period will be taking a quiz.


The major difference, in my opinion, between the successful students and the unsuccessful ones, not just on this activity, but in school in general, is not academic ability, but decision-making ability.

The students in my geometry class choose to make school a priority.  Even if they don't like it, they choose curiosity and mental exercises over not.  Not always, but often enough to be successful.

The students in my pre-algebra class, for the most part, choose to make other things a priority.  I'm not in any way criticizing these decisions, because my mom will tell you I was exactly the same way.  It's difficult to be a middle school student and making good, long term decisions is VERY difficult.