Posted by Justin at 7:33 PM
Author's Note: The following post is lengthy and may depress/disillusion those of who think I'm better than awful.  Feel free to skip to the bottom for a summary of the post and a cry for help.

I am not a man of moderation.  When I do something, I jump in with both feet, regardless of how insane it may be.  At the same time, it may take me a while to decide to jump in at all.  This seems to be true in almost all aspects of my life.

You get the idea.

Those of you who read my blog know that I have a tendency to do this in my teaching as well.  Sometimes it works, sometimes it fails horribly.  A prime example of this was two weeks ago when I decided to turn my class into Genius Hour.  I stepped away from the typical classroom style, gave the kids iPads and said "learn what you want to learn."

Another example is how I have jumped into the #MTBoS with both feet, preaching the gospel of being a connected educator with everyone I meet.


This life of extremes has led to two VERY different styles and mentalities over the years and I want this post to serve as a cry for help.  Allow me to set the scene of my teaching mentality for the 3 of the past 4 years.  It may shock those of you who only know me through twitter or this blog, but I assure you (and my family and coworkers will agree) that it is true.

I should also state that what I'm about to write is based entirely on my perceptions and is probably inaccurate and tainted with bitterness and frustration.

I used to dread going to work.  I began in my current district by teaching in our alternate education program. It ran from 2:30 (when the rest of the school cleared out) until 7.  It was designed for students whose behavior made them unable to be a part of the general school population.  Before these students showed up, I was in several different rooms, teaching from my backpack.  I didn't use a cart because my classes were both upstairs and downstairs.  It felt to me as though I was assigned the leftover classes, filled with leftover students.

In hindsight, this was not even remotely a fair assessment of the situation, but it is what I thought.  I constantly complained to my wife about how lazy my students were and how they wouldn't do any work.  I had some pretty great students, but I never thought about them. I only ever thought about the ones who didn't do what I wanted all the time.

I was miserable and I was making everyone else miserable too.  I was constantly applying for new jobs, thinking that if I could get into a "better district" that all of my problems would be solved.  Every interview filled me with hope and every rejection sent me further and further into despair.  I began to feel trapped and, unfairly, began to resent my students and coworkers for it.

Every lesson that failed was because the students were unprepared, or didn't know the basics, or wouldn't put in the effort, or...or...or...

But it was NEVER my fault.  I was doing my job! I was showing up every day and covering the content that I was supposed to cover with creativity and brilliance and passion and I held my student accountable for their learning.  I was strict, but fair and I didn't coddle them the way the other teachers did.  I wasn't going to let them pass my class if they didn't have the knowledge to do so.

After three years of this, I could feel myself burning out.  Last year, I tried a new tactic.  Indifference.

"I'm going to go in every day, do what I can do and not get upset when they kids don't do what they are supposed to do!"  Furthermore, I planned to have this year, my 5th year in the district, be the year when I kicked my feet up on the desk, gave kids worksheets, rode out the year, collected my student loan forgiveness and left teaching forever.

I knew that I wasn't doing much good for the kids and I certainly wasn't happy so, there was no reason for me to stay.

Then I attended Twitter Math Camp.  My mentality on teaching in general and my role specifically changed almost overnight.  It might be called a religious experience.

This year, I have changed almost every aspect of my teaching.  I am warmer, kinder, more understanding with my students.  I give them freedom to express themselves and I ask their opinions on how the class is going, what they would like to see.  I give them ownership of their education while still realizing that they are children who need to be guided.

When I encounter a student who doesn't know how to add, I don't blame the student for being lazy.  I don't blame the elementary school for passing on a student who clearly had not mastered material.  I do my best to help that student.  I make up alternate assignments or work with them to get up to speed.  I have them work on simple problems to boost their confidence and give them a feeling of success.

This may sound all well and good, but I know I take it too far.  I gave a project that was supposed to take a week.  When less than 5% of my students turned in the finished product, I started out angry.  Then I quickly shifted the blame to myself and began thinking about what I could have done differently to encourage students to complete the task on time and with higher proficiency.  Several suggestions came to mind, including making all of the work in class, setting daily deadlines and goals and talking about the project much more.

I'm now experiencing the opposite of what I was for the past several years.  Now, people are telling me that the kids have to be held responsible for SOME of their learning.  THEY have to make the decision to do or not do the assignments.  No matter how interesting I make a lesson, some kids will simply refuse to do it because they won't ever find it more interesting than playing Call of Duty.

A few weeks ago, someone posted on Twitter (I can't remember who) that striving to make your lessons engaging implies that math is not engaging already.  It implies that we should be catering to their desires and interests all of the time instead of saying "sometimes you will enjoy this, sometimes you won't.  That's life and it has to be done."  I completely understand the logic behind this.  We don't want to train our students to be assembly line workers.  We want to train them to be Bill Gates, Steve Jobs, etc, but the reality is that the vast majority of them won't.  They still need the skills required of them in case they DO become assembly line workers. 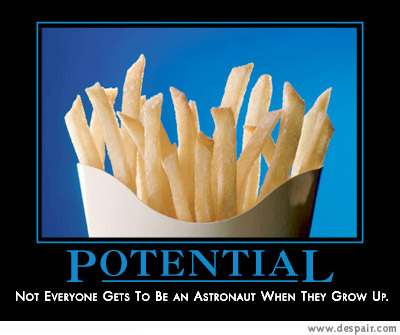 I can almost feel the pendulum starting to swing back and I don't want it to! At the same time, I don't think it's good where it is.  I need it to stop in the middle. (Well, maybe a bit this side of middle)

So now I get to the point of this post.  I have NO idea where to draw the line.  I have come to the realization that I don't know how to distinguish between things that they should be held accountable for and the things that I should be.

Not being a man of moderation, I don't know where the middle ground is, or even how to find it..

If you got bored and skipped to the bottom, I don't blame you.  Here's a summary of the novella leading up to this point:

I used to only blame the students for their failures.  Now, I only blame myself.  I need to find a medium.  I don't have any idea where the line is between my responsibility for teaching and their responsibility for learning.  I know that it's a fluid line and changes with every child in every grade, but I don't even know where to begin.

I feel as thought there should be an entire class dedicated to this topic in every teacher preparation program.

I would love to hear your thoughts.

Maybe the true purpose of this blog is to serve as a guide for what NOT to do.

But, hey! At least I'd still be teaching someone something.