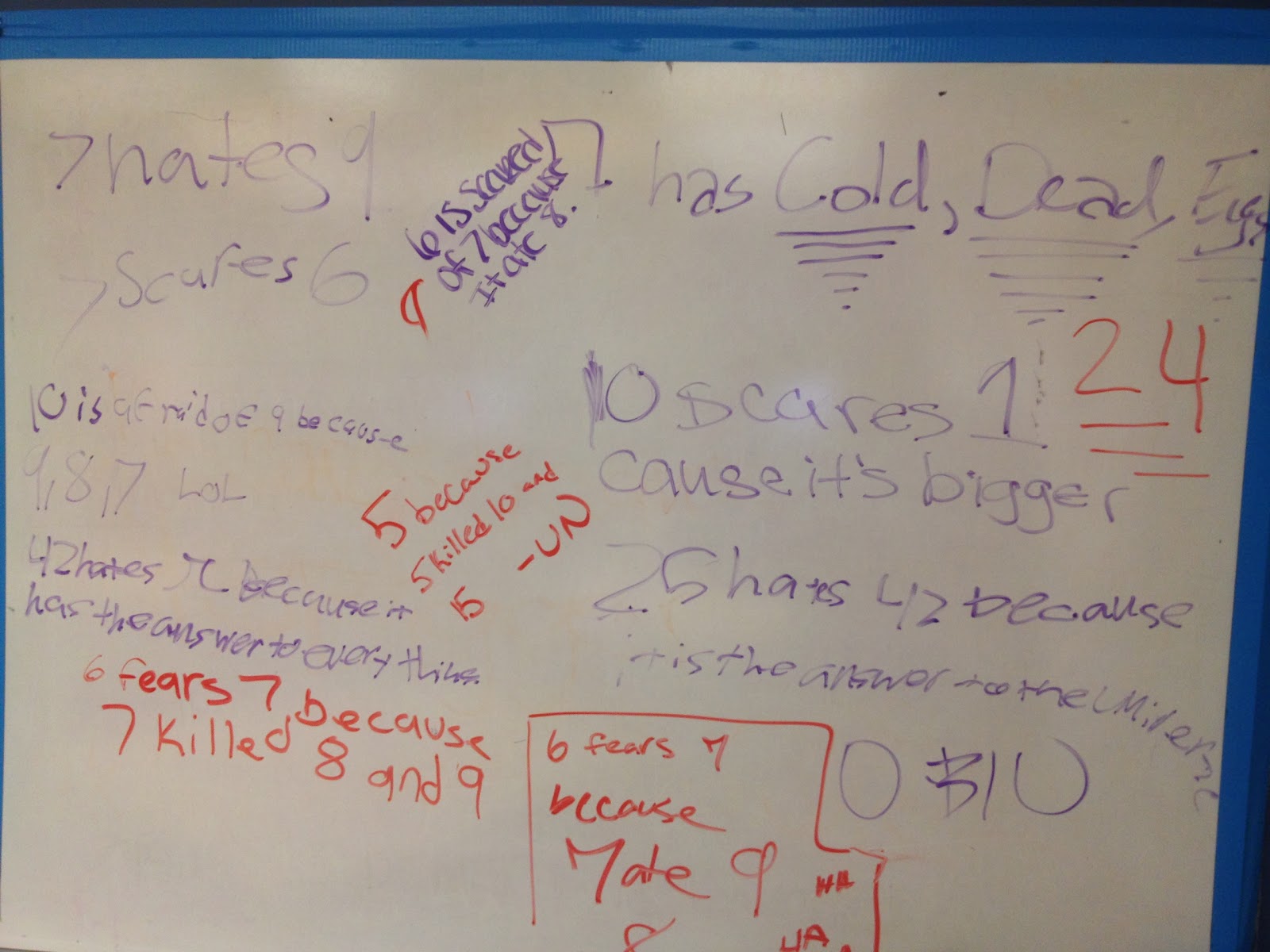 "We have a theory!  7 was dating 9, and 6 and 9 were 'friends' but secretly dating.  7 found out and went crazy and killed 9, his girlfriend, and is on his way to kill 6, the other boyfriend.  So 7 is now just a crazy maniac murderer."

I had a nice conversation this morning with the geometry students about the results of their first SBG quiz.  They filled out their skill sheets and analyzed the group results.  We determined that for the most part, the class is good with skills 7, 8 and 9.  Skills 10, 11, and 12 need some work, but since we haven't covered them in class yet, I was VERY impressed with the results.

I reiterated again that if they earned a score that they didn't like, they had steps to take to improve it.
It was wonderful to see students identifying their strengths and weaknesses in a coherent way.  I talked about one student who earned 3, 4, 3.5, 1, 1, 0 on his 6 skills.  I explained that on a traditional test, he would have received a 50%, or an F.  On this type of assessment, however, he clearly understood half of the problems and so doesn't need to worry much about them in the future.  The students agreed that this was a MUCH better way to do assessments.

With them on board, I think it will go MUCH smoother and I'm excited to work with it further.


I'm ashamed to say that frustration boiled over in BOTH sections of pre-algebra.  I found an activity involving geoboards to help us discover the Pythagorean Theorem.  I think it's much more valuable to students to know WHERE a formula comes instead of just being TOLD that formula.

The activity dealt with drawing a right triangle of certain dimension (1X1) on the geoboard, then constructing squares along each side of the triangle, finding the areas of those squares and finding a pattern.

In the first section, we had a great discussion and demonstration to get them started.  Then when it came time for independent work, they sat and stared at the wall.  It took several minutes of cajoling to even get them to pick up their pencils.  My frustration level was so high that I didn't even care WHY they weren't doing the assignment.  I managed to sit with three students who were asking very thoughtful questions and were genuinely lost.  I worked with them with infinite patience and care, explaining whatever they needed me to, asking questions to lead them down certain paths.

In the mean time, other students began a bickering match about who stole a pen from whom.  I did my best to ignore it, but when they tried to draw me into it, I snapped.

In my mind, the worst sin a student can commit is taking away from the learning opportunity of another student.  When a student who had done nothing for 45 minutes interrupted  my work with three students who were working hard and struggling, I may have lost my mind a bit.

I have several parents to call tonight.

I think it may have scared the kids who were doing what they were supposed to.

In the second section, it took me 40 minutes to get through the demonstration because students would simply not stop talking.

After that, however, two students who are generally off task and disruptive worked incredibly well and did an amazing job on the rest of the paper.  I made sure to heap genuine praise upon them and their efforts.


When my geometry kids came back to me at the end of the day to get progress reports, they knew something was seriously wrong.  They had never seen me in such a state and I think they, too, were a bit frightened.


It's so important that when I get frustrated at students that I don't take it out on innocent kids.  When I snapped at the one today, I was able to turn around and calmly and patiently get back to work with the others who were on task.

I hate how angry I was.  The level of immaturity is not something I can tolerate.  I understand that they are still children, but at 14, the behavior was unacceptable.

Still, I hate how angry I was.

I hate even more that they saw it.  I hate that I wasn't able to keep my cool and calmly diffuse the situation.  I've been working so hard on cultivating positive student relationships this year and this just flied right in the face of that.

I'll have to pull that student aside tomorrow and talk with him calmly and patiently, apologize for my outburst, but make it clear that his behavior was not acceptable.  I think I try to have too many heart-to-hearts in the heat of the moment, while tempers (mostly mine) and frustrations (mostly mine) are still high.

They are still children, and children who are going through the toughest times in their lives: middle school.


This job is hard...
Email ThisBlogThis!Share to TwitterShare to FacebookShare to Pinterest