Posted by Justin at 11:48 PM
There have been many pictures floating around the interwebs lately that claim to be the insane mathemagical techniques required by Common Core.  The majority of these are shared on Facebook or Twitter with a statement similar to "I'm a PhD in engineering and I don't understand any of this! Common Core is poisoning our kids!!"

The images are then shared by hundreds of people who add their own comments that sound very much like "This is crazy! If a PhD in engineering can't do it, how can we expect children to?"

The most recent one was posted to my own wall and a discussion ensued that made me feel as though I needed to write about this. 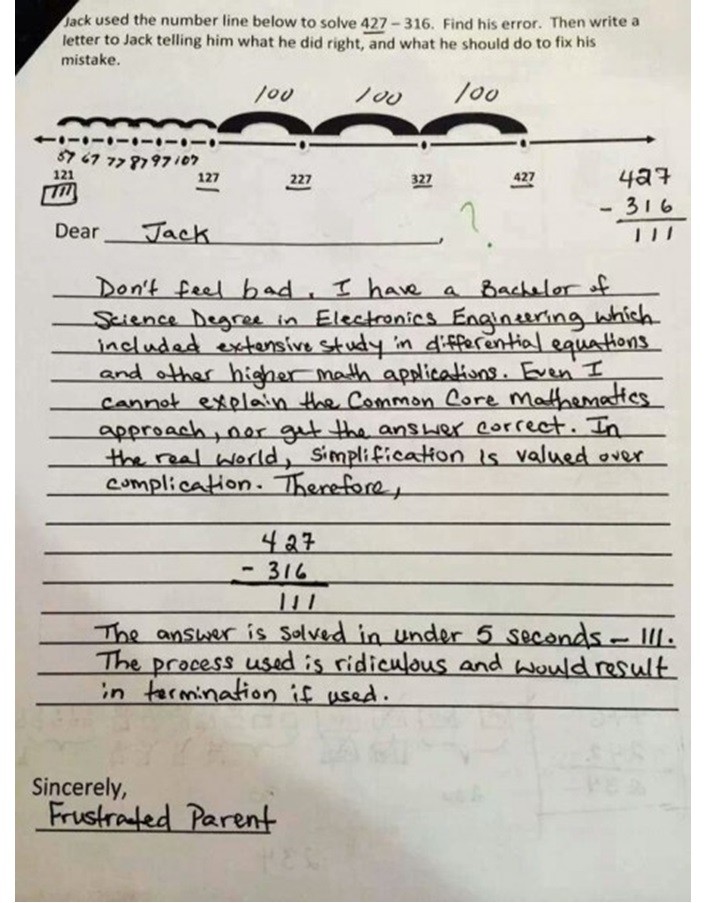 I asked my wife to look it over and her response went as follows:

This entire process took her less than a minute.  I did not prompt her to figure out what was happening or how to do it or what mistakes had been made.  She came to all of those conclusions on her own.  While my wife is a college graduate (with a better GPA than I had), she is not a mathematician or a math teacher.  Her area of study was biology.  Yet, when presented with the above problem, she worked through it to figure out what was going on.

Several things struck me that I'd like to lay out, but first I feel the need to clarify one thing:

Common Core is NOT a curriculum.

It's NOT a curriculum.  It is a set of skills and concepts.  When students are asked to "solve this problem using the Common Core method" there is either a misunderstanding of the teacher, or the Common Core standards.

There is no "Common Core method."  Students are not being required to learn a new type of magic that no engineers, and certainly no parents, can possibly grasp.

But I'm getting ahead of myself.

Let me address the image above.

I have a Bachelor of Science degree in Electronics Engineering... Even I cannot explain the Common Core Mathematics approach, nor get the answer correct.

First, there is no "Common Core Mathematics approach."  I will assume that what the author was trying convey was that he/she wasn't able to explain what was happening with the number line.  This means that the author has no problems solving skills, or simply chooses not to apply them to determine the method being used which, while it may be unfamiliar to the viewer, is fairly easy to discern with some minor effort.

Second, I'm not sure what the author means by the inability to get "the answer correct."  A quick glance at the directions shows that no answer is being asked for.  What IS being asked for is for the student to examine the method used in the example and determine where it went awry.  At no point does it require the student to use the method or reproduce it.  It asks to explain the mistake.  They are being asked to analyze the work of another person, examine it for errors and convey what those errors are.

This is the method of subtraction that has been taught for decades to countless children.  While I (and Common Core) have no real problem with it, it doesn't convey an accurate understanding of number sense. If you did this method, you probably said something along the lines of "four minus three equals one."

But it's not what's happening in the problem above.  What's actually happening is "four hundreds minus three hundreds equals one hundred."  This is a minor change that makes all the difference.  The latter wording expresses a solid understanding of mathematical practice and numeracy where the first one does not.

Using the "traditional method" for this example requires "borrowing" from the next column.   This makes it even more difficult for a child to explain how and why "one minus two equals nine" as well as why every other number in the problem must be changed.  A person with a solid number sense would not have difficulty doing so.  On a number line, starting at 1001 and moving two spaces to the left is a very simple concept that anyone can grasp.

The answer is solved in under 5 seconds.

Absolutely! This is an incredibly simple problem.  That's why the student was not asked to do it.  The student was asked to analyze the method used by another person and explain where a mistake was made.  Since the person writing this claims to be an electronics engineer, perhaps they would have had a greater understanding of the problem if the directions had been written as follows:

Jack wrote a program to display a number line and solve 427-316. Examine the output and create a bug report.


All of this, however, is minor compared to the major issue in this letter.  What it comes down to is this: A parent, instead of encouraging their child to face a difficult task head on, devise a plan and search for solutions, instead writes a complaint letter.  Instead of modeling appropriate behavior when faced with a challenge, this parent demonstrates that it is acceptable to give up and blame their failure on a "ridiculous" process.

In the real world, if I asked an employee to complete a task and their response was to hand it back, incomplete, with a note about how the process was ridiculous, THAT would "result in termination."


I will conclude this rant with three things.  First, the link to the Common Core Standards so that you can read them yourself.  Please take the time to do so before you believe what you see posted on Facebook.

Second, the statement that I acknowledge that there are many things to object to in Common Core.  There are legitimate concerns about training and implementation that should not be taken lightly.  However, images such as the one above, which provides no source or context, do not serve the public discourse.  They exist for the sole purpose of misinformation and praying on the fears of confused parents and teachers.

Third, in case you don't have time to browse their whole site, here are the Standards for Mathematical Practice.  These are, in my mind, the most important parts of Common Core.

Aren't these the things that students, and all citizens, should be able to do?
Email ThisBlogThis!Share to TwitterShare to FacebookShare to Pinterest