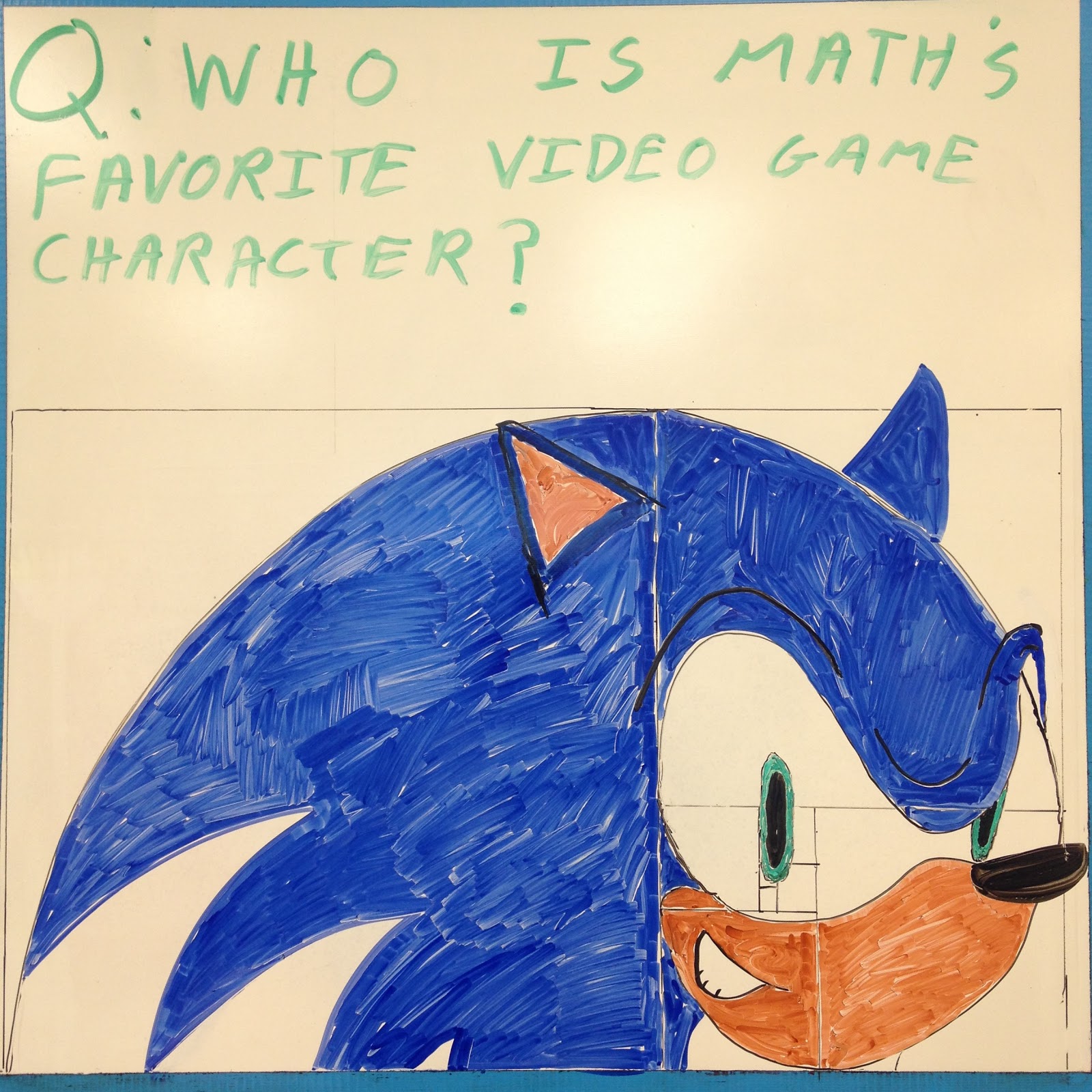 On my sick day, I graded the geometry quizzes and was VERY disappointed.  First, I was disappointed by how few of them were actually turned in on time.  I feel as though my students are taking advantage of my willingness to let them turn in late work.  I don't mean "take advantage of" to mean that they are utilizing the flexibility for the purpose of creating a better product.  The work that comes in late does not seem to be of any higher quality than work that comes in on time, which leads me to the second disappointment: the scores.

The class average was about a 50% with no problems being singled out as overwhelmingly wrong.  Incorrect answers were scattered throughout the test.  After putting in the grades that students earned, along with zeroes for the assignments that haven't been turned in, there are 12 students with F's and another 9 with D's.

For all intents and purposes, this is an honors course.  We had a discussion today about the lack of effort.  Also, how it isn't just in my class.  I've spoken with their science and social studies teachers who tell me similar things.  The quality of work with these students has dropped off precipitously in the past 2 months.

Instead of going over the questions with them, I did the following:

I wrote the number 1-20 (questions on the quiz) on mini post-it notes.
I folded them up and put them in a box, going around the room having each group pick one at a time.
The four remaining numbers were mine.
The groups were take their 2 problems, come up with solutions and explanations for each.
During the second half of class, the groups presented their work and explanations to the rest of the class in 2 minutes bursts.

Since the numbers were chosen randomly, a few groups got problems that everyone in the group got wrong and had to solve them before them could explain to the class.  Overall, I was very pleased with this activity and plan to do it again.  The next time, however, I need to change a few things:

The pre-algebra classes did a cumulative  review, working in partners, for the period.  A large portion of them were on task.  The pace at which they work, however, is incredibly slow.  I don't think this is due to lack of understanding and much as the fact that they are easily distracted.  As a result, it takes three times as long to do a problem and they think they are bad at math.

In reality, they are bad at attending to a task.  It doesn't even seem to matter what that task is.  With the variety of activities that I've tried, to maximize engagement, I've noticed that the same kids are consistently off-task.  This leads me to believe that it's not necessarily the task that needs to be modified as much as a vital skill that needs to be honed.

Students need to be taught about attention to task and task completion, regardless of the task given to them.  My students who consistently do what I ask of them say that when they hate what we're doing, they still do it just to get it over with.  I think this is a vital insight and if it can be taught, it should be.

Period 8/9 had maybe 10% of the students doing what I asked.  Even with directions written on the board, several wasted at least half an hour asking what we were supposed to be doing.  Then sat there with their books closed from the remainder of the period.

I let several students bait me and ended up calling several parents during the period.  I'm beginning to wonder if there is a game going to see who can give the greatest level of disrespect to teachers.

During period 4/5, I got a migraine.  I get occular migraines.  Those of you who are unfamiliar with that term, let me explain.  A typical migraine is like a VERY bad headache.  They can last anywhere from a few minutes to a few days.  Occular migraines are slightly different.  There is little to no pain associated with them.

I just go blind for a bit.

It starts out like an afterimage that slowly spreads across my vision, leaving "holes" in what I can see, making it difficult to read, or do anything that requires my eyes.  If I take some Advil right when I notice it, it usually only lasts about half an hour.

But it is a scary half hour.

I am very glad that today was not a "lecture" day.


I pulled aside a student who, by all rights, should have an A and has been slacking lately.  I told her how concerned I was and asked if there was anything I could do to help.  She said that she didn't know what was up, but had been out of sorts.  She appreciated my concern and promised to let me know if I could help.

Then, I pulled aside the student in pre-algebra who was at the center of my bad week last week.  The situation had resulted in a 3 day suspension for him and I felt we needed to talk about it.

I told him about what a great he had done when we first came into my class and how sorry I was that things had gone off the rails the way that they did.  I told him how much I liked him and I hoped that we could start over with a clean slate.  He said he'd like that and I didn't detect any anger or sarcasm.  We shook hands on it and when he went in for the "man hug" I obliged.

He is a good kid and I do like him.  Things just got way out of hand and I'm hoping this is the first step to getting both of us back on track.
Email ThisBlogThis!Share to TwitterShare to FacebookShare to Pinterest