Posted by Justin at 4:03 PM
Way back in September, I wrote about teaching positive and negative numbers in terms of digging and filling holes.  Since then, I've been trying to incorporate as many visual representations into my lessons as possible.

Today, we had a 2-hour delay and, again, half of the buses were either late or never showed up.  The chaos was a bit too much for me, so I kicked two kids out of homeroom to restore order.  I reiterated my expectations of classroom behavior and procedures and got back to my lesson.  After a quick group review of the topic we covered yesterday, (solving equations with addition and subtraction) I handed out sheets with balance scales and asked them to do visual representations for 4 problems of their choosing.

After I set the students up with their assignments, I sat at a desk in the middle and worked with anyone who wished to join me.  I was very impressed with the results. 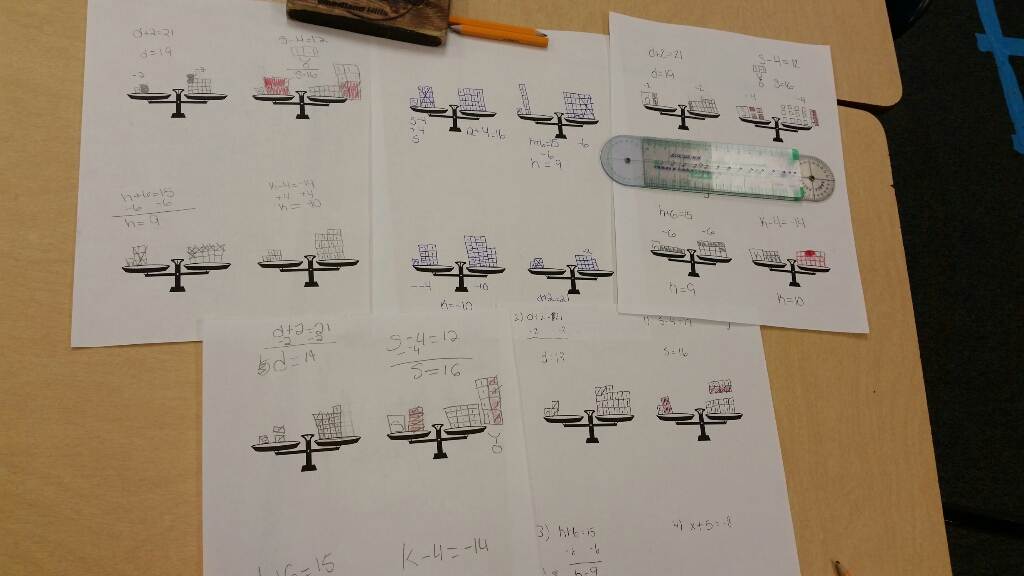 In geometry, I talked about my desires to have them demonstrate their knowledge however they can.  Ideally, I'd like to give them total freedom by having the assignment be "Prove that you know the material, however you can."

But that type of assignment would make me apoplectic as a student.

Instead, I chose 2 different chapter assessments and gave them the choice.  Both will be due at the start of class tomorrow and they can use whatever resources they want.  Several students wanted to go over the guided notes, so I sat with them and helped them.  After working a proof or two, I realized that they may have been wanting a little more structure, so I dug through my treasure trove of resources and pulled out a set of Proof Blocks! We did another proof using these and I think the students liked them.  I had them printed on card stock last year, but we didn't use them, so I had a few sets sitting around.

I forget that I don't always need a class set of every resource.  Differentiation is key to student achievement.

Some students would find the proof blocks confusing while others could really benefit from them.  Maybe at some point, I'll get my act together and organize my resources in a way that would give me easy access to them when needed.

Today, I have a Global Math Department presentation to get ready and a Dresden Files book to read!
Email ThisBlogThis!Share to TwitterShare to FacebookShare to Pinterest