Posted by Justin at 3:53 PM
I assigned a take-home quiz to my students this weekend..  I had assigned it in class on Friday, but I realized quickly how unprepared they were to take it in a timely fashion, so I sent it home.

Instead of yelling, I told them again about how education is not a spectator sport.

"Who in this room got better at football by watching the game last night?"
**crickets**

I can't go back.  I can't spend any more time on concepts that I've covered repeatedly.  I understand that if they didn't learn it, it means I didn't teach it, I didn't reach them, but I worry that by going back, it only solidifies that they don't need to put the effort in because I'll just do it again.

So I'm moving on.  I'm making a concerted effort to spiral back on concepts and  incorporate them into the new material.

I'm also going to try to work on spoon-feeding them less.  Today, they came in to this: 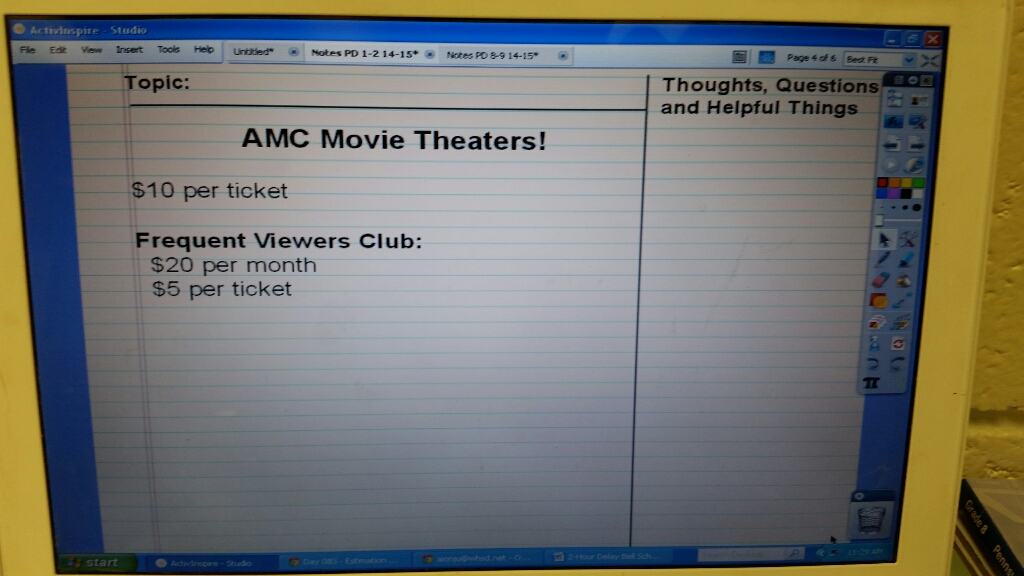 We've been talking about this problem, or this scenario, for a month or so.  Each time we have a new topic, I go back to this example and add something new.  Instead of asking them a content question, I put this information up on the board and asked them what questions THEY could come up with.

The majority of their questions were about the rules of the discount. Could they bring a friend? How many movies could they see? If they bought the card near the end of the month, would they get it cheaper?

Eventually, we got around the question that I wanted: How many movies do I have to see to be worth buying the discount?

I asked them to speculate, write it down and think about how they would figure it out.  Then we talked.

We started with a chart and when we had explored their thoughts and questions, moved on to the graph.  I wanted them to see why it made more sense to buy the card after a certain point and what that looked like.  We talked about the implications and what the lines meant as well as the what the intersection meant.

It was a good discussion and the students were more engaged than they have been.  It was hard to tell if that was because of the material, or because of what I had told them, but I'll take it.

The geometry class is starting their midterm review.  It's a 71 question packet that the high school developed.  I'm giving them a few days to work on it.  We discussed that one of my main goals is to make them into independent learners and so they needed to check with three other sources before they asked me any questions.

They broke off into groups and did a great job being on task for the whole time.  There were great discussions that I heard and I was very proud of them.