Posted by Justin at 3:03 PM
I have had a bad week or so.  My classes have been difficult, I haven't been sleeping well and I don't feel as though I've been an effective educator.

Over the weekend, I added my students into ClassDojo.  Today, during their Estimation 180 warm-up, I used my phone to mark who completed the task.  After we went over it, I pulled up the screen on the computer and showed them what I was doing.

The display showed which students were absent and which ones completed the warm-up.  I walked them through the basics and showed them the default point system.

I explained that I wanted to give them a say in what they felt made a good educational environment.  I gave them their first task:

"In the groups where you are sitting right now, come up with three behaviors for which points should be awarded and three for which they should be taken away."

I told them that I wanted them to think about behaviors that contribute to or detract from creating a positive learning environment.  I gave them 5-10 minutes while I walked around and listened.  Then I brought them back together, asked each group for one from each category and listed them on the board in the front. 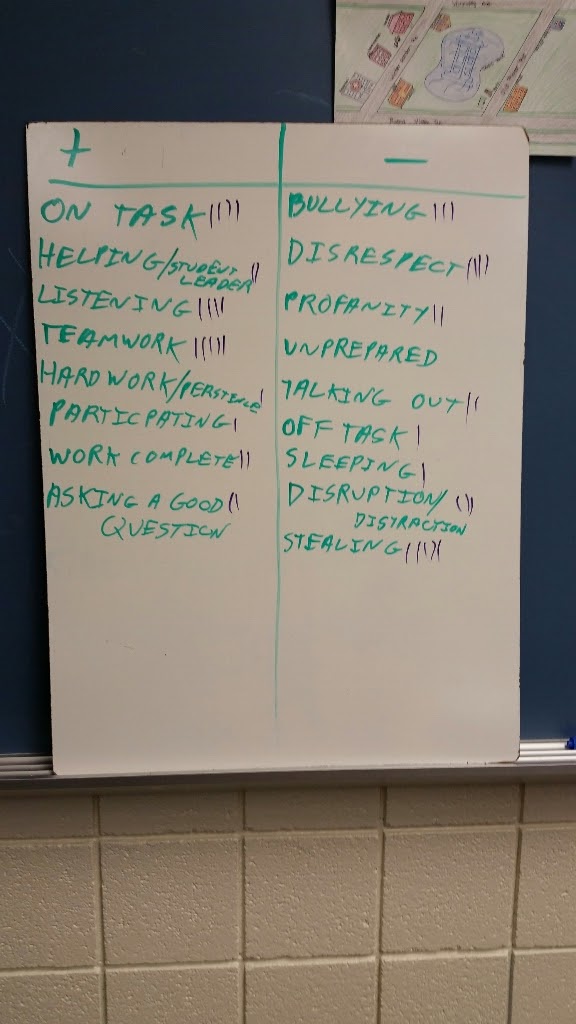 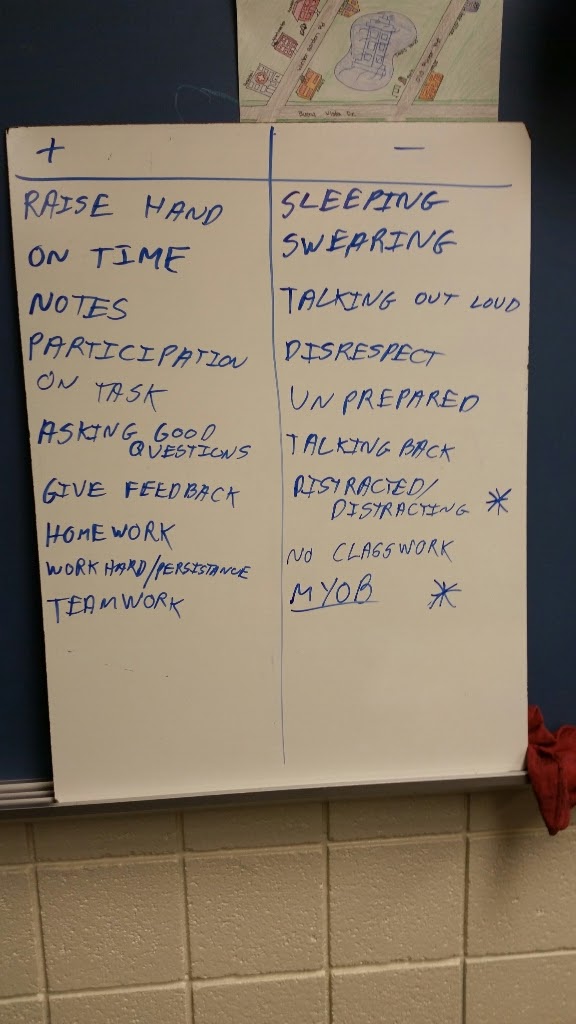 We had a discussion and combined a few of the items that seemed redundant.

Then I asked them to discuss the list in their groups and pick the three items that they thought were most important.

As they were doing this, I assigned points for teamwork.

After the tally, the behaviors that we decided on were:

With this new point system in place, we spent the second class talking about patterns.  I used selected objects from Visual Patterns to lead into the idea of determining a general form.  The discussion was very good!  Students were able to explain their thinking, restate what others had said and acknowledge that multiple approaches were valid.

With 5 minutes left, I put the point sheet up on the screen so students could see how much they had earned for the day.  I used the "Random Student" function to call on kids for exit ticket questions.

"Tell me one thing you learned today."
"Tell me something we discussed today."
"What is your homework tonight?"
"How do you pronounce the kind of sequence we're talking about?"

I didn't assign any negative points in 1st period and only 1 in 8th (a student refused to stop yelling out the answers).  I would rather build up rather than tear down.

I was surprised and pleased about how well it went.  It wasn't perfect by any means, but it was the best class we've had in a long time.  I was able to heap authentic praise on the entire class and I got participation from students who normally sit silently.

I also found it VERY interesting to look at the similarities and differences in chosen behaviors in the two classes.  When I asked about it in 8th period, one of the kids said "We don't do the good things we picked and we do a lot of the bad things we picked."


Now I'm off to Office Depot to pick up some compasses for my geometry students...
Email ThisBlogThis!Share to TwitterShare to FacebookShare to Pinterest