Posted by Justin at 4:00 PM
First thing this morning, I printed out report cards for all of my students.  I handed them out and I think having it in front of them lit a fire.  I gave them 5 practical word problems and told them my grade book was open.  I called the kids up one at a time and checked in anything that they had completed.

We are covering systems of equations and, since the first question on the sheet dealt with tacos, I got to draw tacos! 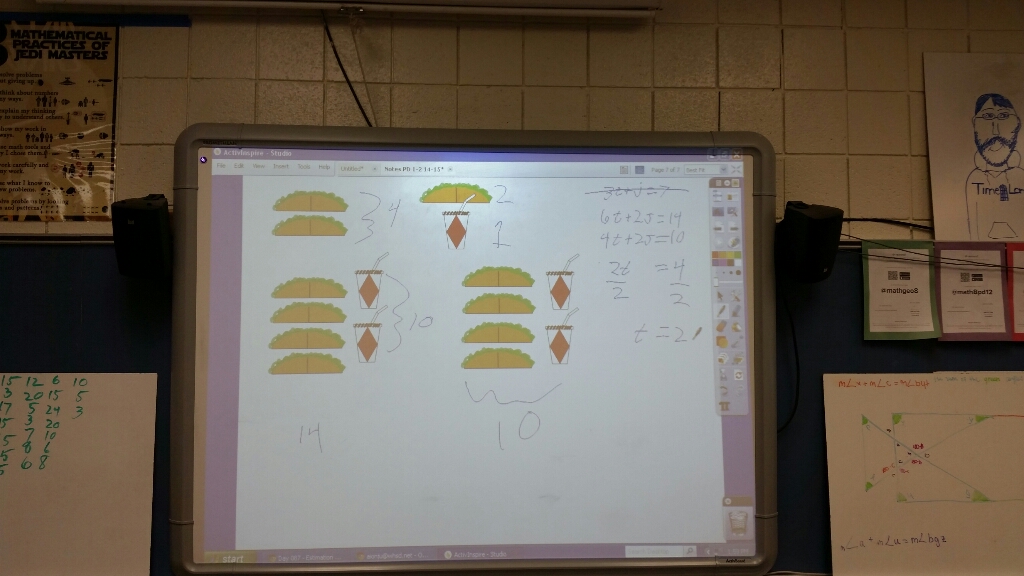 They worked together, and turned in work.  They asked insightful questions.  Our building math coach joined us for the class and he was able to walk around and help the students with their inquiries while I worked with others.

After class, he and I had a discussion about which things went well and which could have gone better.  I found myself diverting success for the class onto the lack of attendance of two specific students.  I kept saying that it wouldn't have been such a good class if they had been there because they have a tendency to set off other students around them.

8th period was the same way.  There were 2 highly disruptive students who were not in class and, either as a result or as a coincidence, class ran VERY smoothly.

I find it interesting how I have a tendency to shift responsibility  for successes.  When lessons go poorly, it could be because the students weren't engaged and I should have done something more or differently.  It could be due to poor preparation of the lesson on my part or my inability to connect to the students' interests and prior knowledge.

If I'm going to take their failures on myself, I need to find a way to take some of the success as well.


The geometry kids are gearing up for their midterm and I need to figure out what to do with the three days that I'll be in school next week.  The marking period ends in the middle of the week, we have no school on Monday and I'll be out on Friday to attend EduCon 2015.  I'm incredibly excited to meet up with educators from around the country and learn from them!

I hope there is a taco night...