Posted by Justin at 6:57 PM
I had two meetings with parents today.  Both students are bright and capable, but have a tendency to make bad choices, specifically in terms of behavior.

With all of my classes taking tests today, it left me with lots of time to think about what kind of parent I will be when my kids get into school, which will be next year for my oldest.

I don't want to be a helicopter parent.
I want my kids to develop independence.  I want them to explore and take on responsibility.  I want them to take risks and not constantly be seeking my approval.  Honestly, I don't worry too much about my children being independent.  That brings me to my other concern.

I don't want to be a detached parent.
I want my children to know that I DO care what they do and who they are hanging out with.  I never want to be the parent who is learning my kids' teachers names for the first time at a conference halfway through the year.  I don't want to be blind-sided by failing grades.

How do you stay on top of your kids without smothering them?  How do stay involved while letting them have independence?

Then I think about the two sets of parents that I know the best: my own, and my wife's.

My parents were not helicopter parents by any stretch.  They allowed me independence and they trusted me to make good choices.  When I didn't, they reigned me back in a bit until I earned the trust again.  I started walking to school with friends in 4th grade.  It was 1.2 miles each way.  In 5th and 6th grade, I started riding my bike the 1.2 miles to the middle school.  In junior high, I wasn't allowed to walk but that was because the only way to the building was on a busy highway with no sidewalks.

Until senior year of high school when I got a car, I walked every day that the weather permitted.  That trip was 2.7 miles each way.  While they weren't helicopter parents, they almost always knew where I was.  Any time I went out, I needed to let them know where I would be and when I would be back.  If I was going to be late, I needed to call and let them know.  I like to think that I earned their trust.

My wife's parents went in a different direction.  They made family the center of almost everything.  They spent time with uncles, aunts, cousins and grandparents.  They took family camping vacations frequently to the middle of nowhere and spent large amounts of quality time together.  My wife once told me that she considers her mother one of her best friends.

This wasn't helicopter parenting as much as it was forging a strong family bond.

Raising my children now, I can clearly see both of these strategies in how my wife and I interact with our children.  I am much more hands-off in terms of activities and direction.  I encourage my kids to play and draw and explore while keeping my eye on them from a little ways off.  I love playing with them, but I also love watching them play together, or by themselves.  I enjoy their independence and I love watching them explore and create.

My wife loves all of these things too, but she prefers to be do doing it alongside them.  When they draw, she lays down on the floor with them and draws.  When we go to the playground, she runs up the ladders and down the slides with them.  She is involved without being overbearing.  She is kind and generous and goofy and fun and I hope that wears off on them.

In discussions with other teachers about the kinds of parents we want to be, we often worry about being "that parent."  The point that is often brought up is that if you're worried about it now, it most likely won't happen later.

I don't think that's entirely true.  I think kids lose direction for all sorts of reasons.  Some of these are parental, but others are outside of anyone's control.

I think that I have been unfair to many parents by judging their parenting based on the behavior of their children.  Kids are complicated.


I don't know how much of it is parenting or other factors, but I noticed a remarkable difference in the way that my students prepared for the tests that they had today.  The math 8 students were allowed to use their notes.  Many thought that meant they didn't have to study, but neglected to remember that they didn't take all that many notes.

The geometry students were allowed to use a notecard.  I loved what they put on their cards and, for the most part, the fact that they didn't use them. 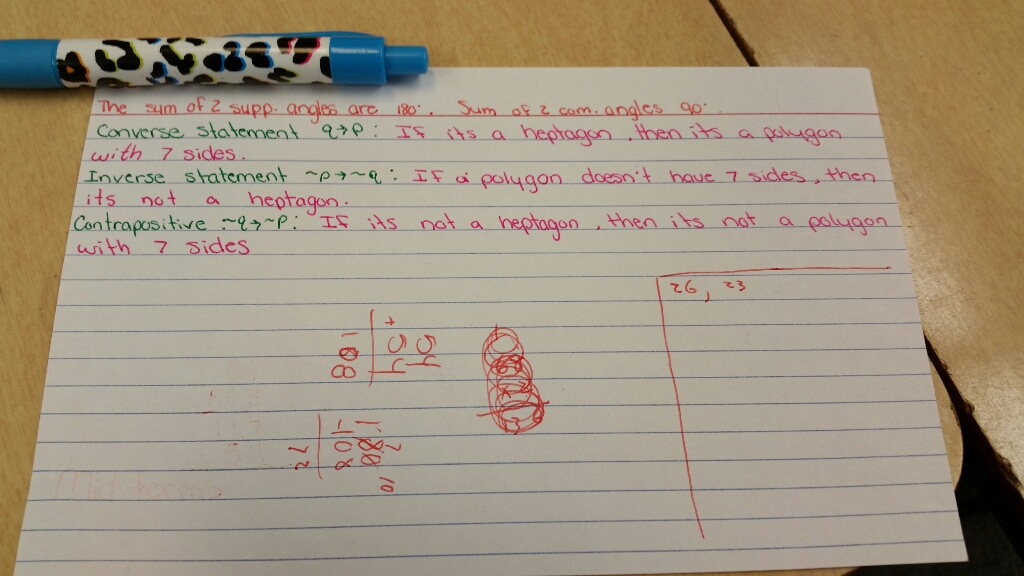 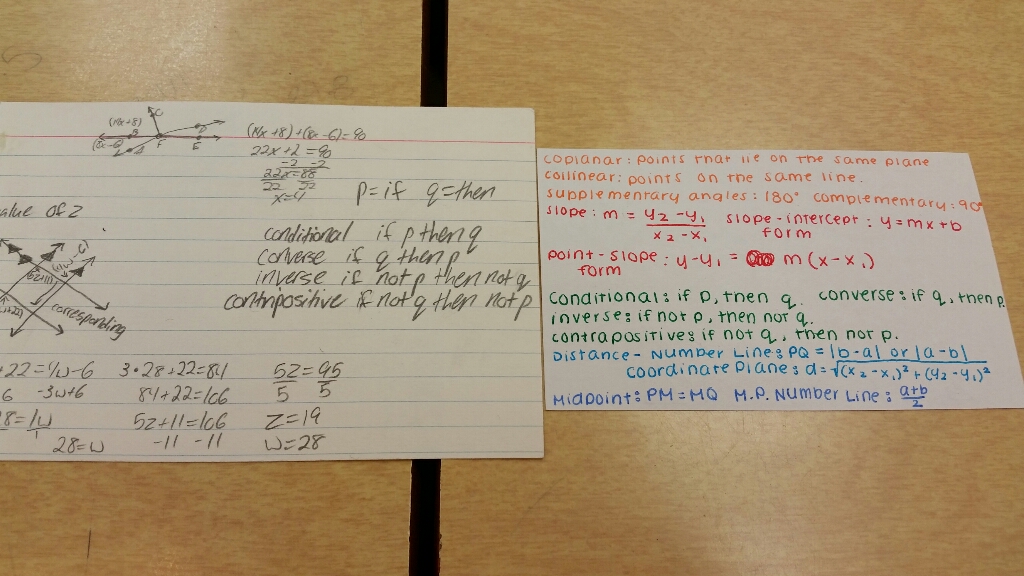 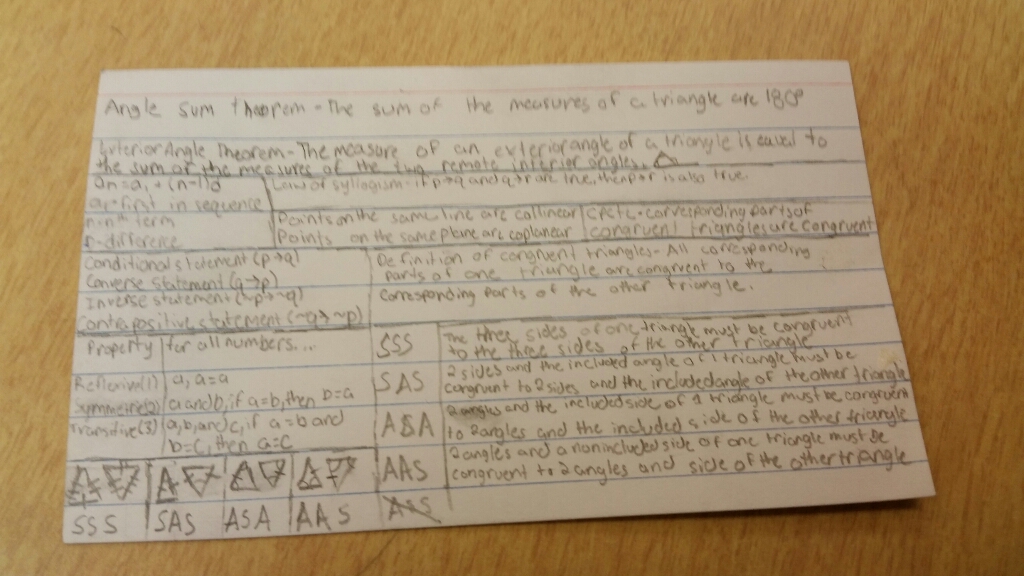 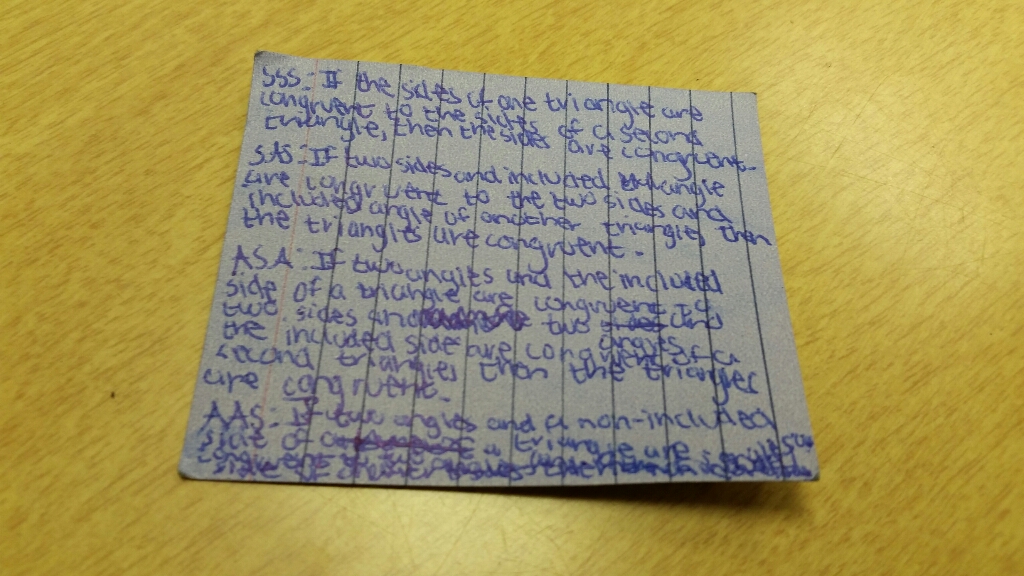 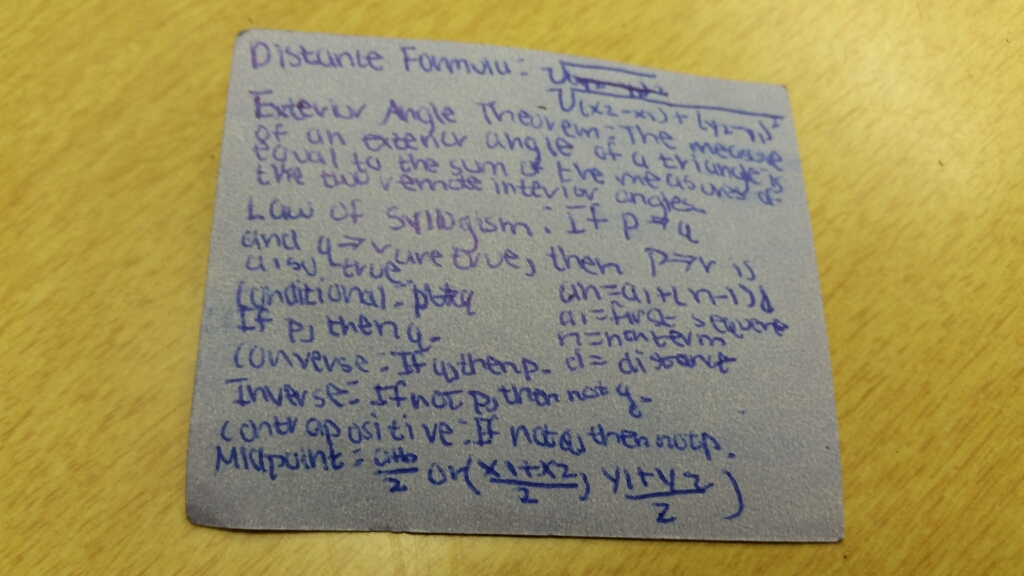 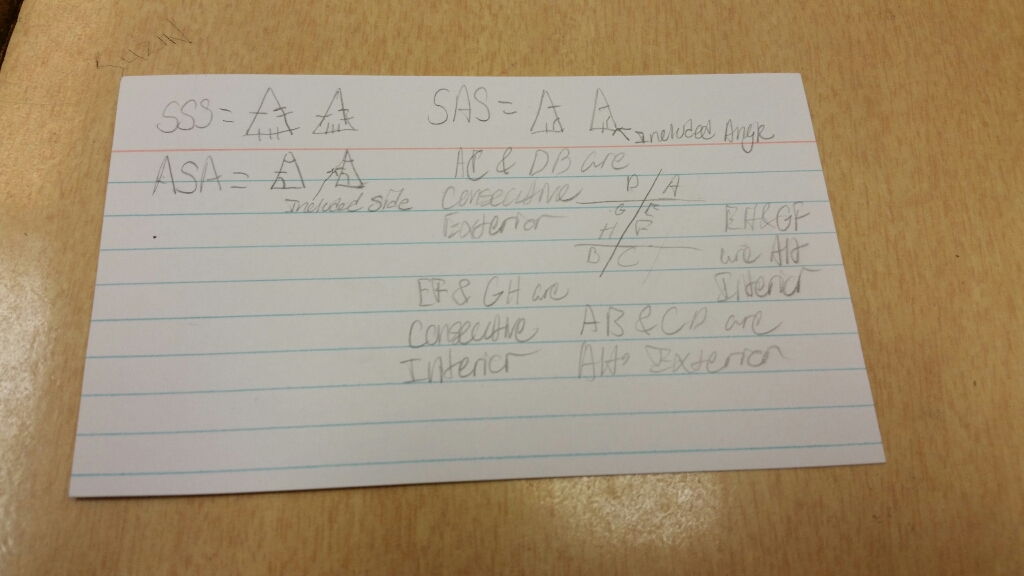 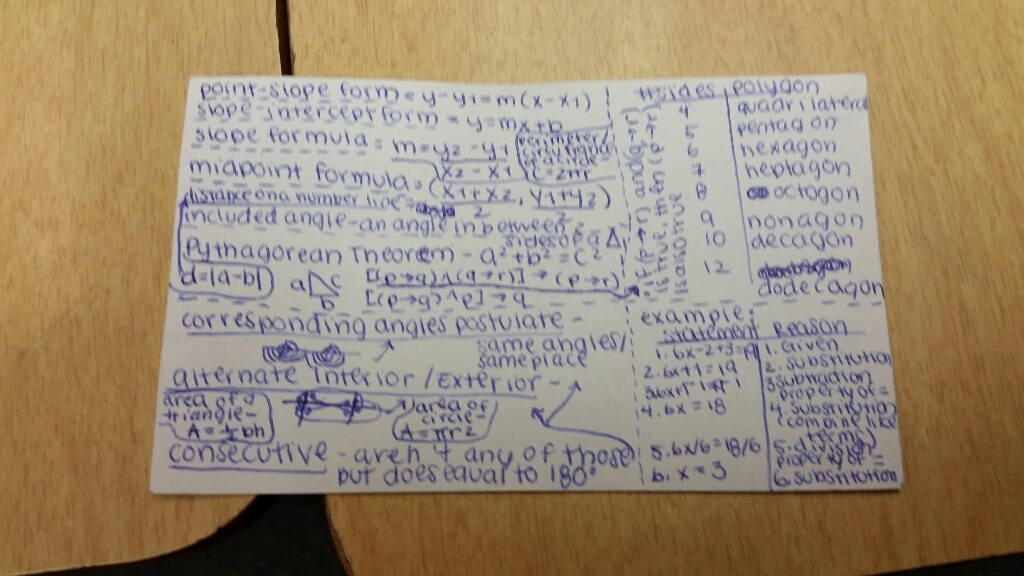 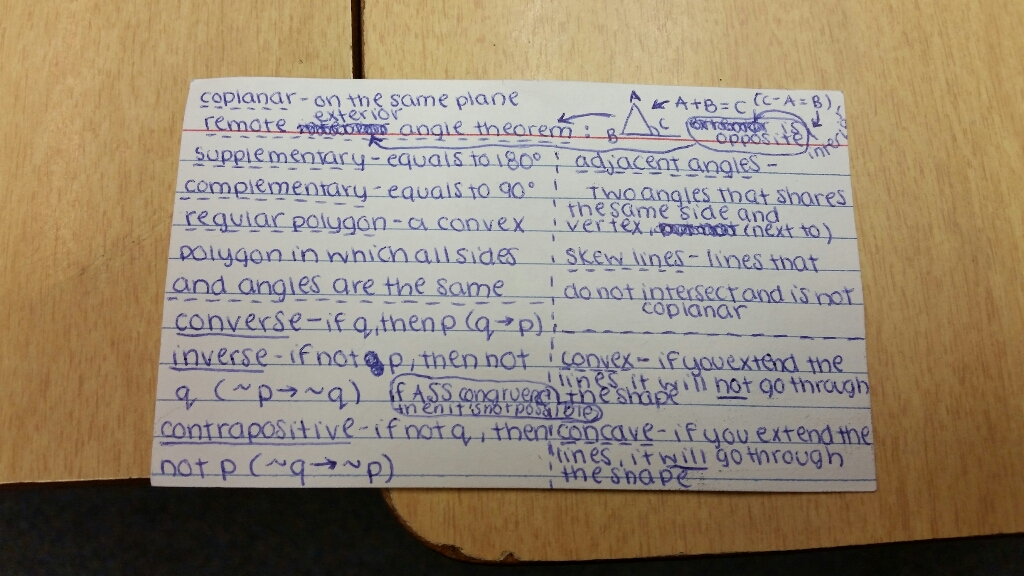 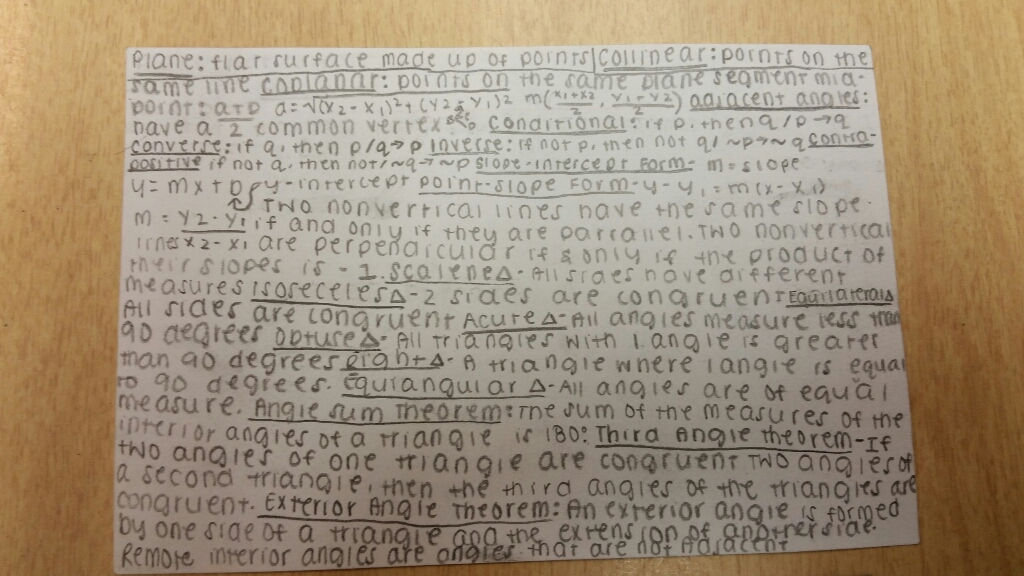 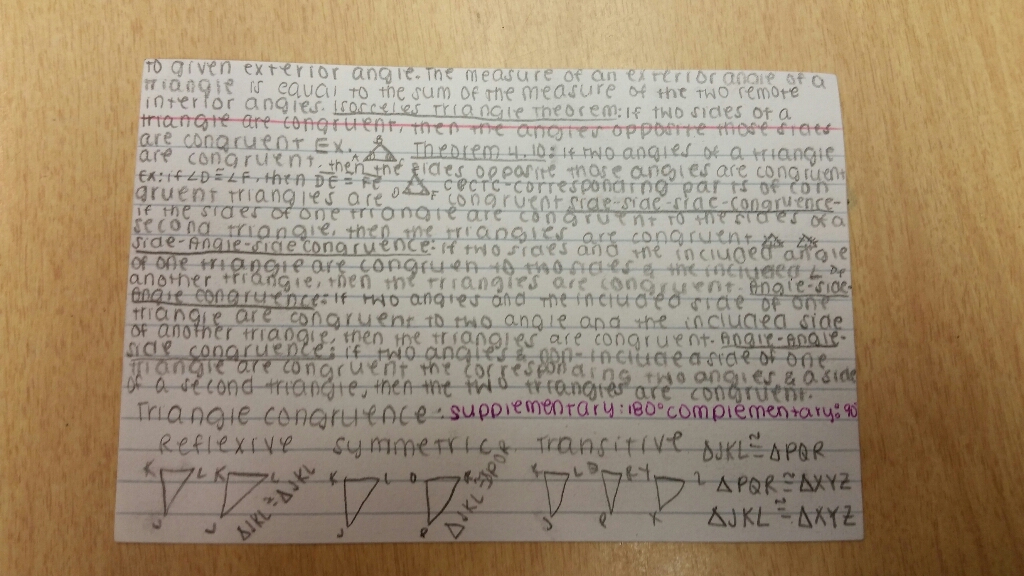