Posted by Justin at 3:29 PM
Our district puts on award-winning musicals.  In the past 26 years, the musical program has been nominated for 197 Gene Kelly awards and has won 97.

This year's show, Peter Pan, has been nominated for 9 more, and rightly so.

Last night, I took my kid and wife to see the show and it was incredible.  The scenery and costumes helped to solidify the illusion that the acting and singing built.  I am always amazed at what students produce when they put their passion into something.

A large portion of the success can be attributed to the director.  He has incredibly high expectations of his cast and crew and they rise those expectations.

If he tells them that they will be cut from the cast if they earn a B, rather than complaining about him, they work to make sure they get a B.  He demands a certain level of character and academic development from the students with whom he works.

And he gets it.


There is so much rhetoric about how we need to have high expectations of our students, but very little explanation of how to do that.  There is tons of conversation about making lessons engaging so that students want to participate, but almost none about how to link these two.

I think that I maintain high expectations for my students.  When I design rubrics, I write them in a way that requires students to put their best effort into the work.

I think that I am sometimes able to develop lessons that grab student interest and get them invested in the outcome.


I have no idea how to consistently have high expectations for my students in areas that they want to do well.


The courses that I teach are not ones that students are climbing over themselves to take.  I hope that eventually, I will be able to make them so, but the reality is that I'm not there.  Several of my students have interest in astronomy and several have interest in the science credit that comes with passing my class.

On top of all of this, my classes are wildly heterogeneous in term of aptitude, ability and academic background. 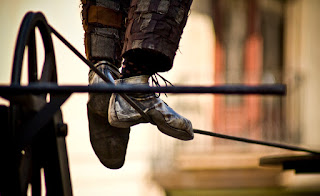 There were former students in the play who did fairly poorly in my class.  They didn't work as hard as they could have because, while they enjoyed the class and claim they enjoyed having me as a teacher, they didn't care enough to do better.  Moving from a B to an A wasn't as high on their list of priorities as giving a stellar performance in the musical.

And I strongly support them.

A young woman in our school is currently failing her chemistry class.  She is not going to be a chemist.

She is, however, going to be a world class artist and she is already well on her way.  The level of effort and passion that she puts into her art staggers me.  What she produces often leaves me speechless and in awe.

The system of school treats her, and countless students like her, as lazy.

I can't change the system, but I can change how I interact with my students and the value that I see in them.

Last week, a young man (not my student) came to me and asked if I would listen to the music that he's been writing.  His friends (my students) told him that if he asked me to listen, I would.  I did.

It's excellent.  I listened to the four raps that he has up on his SoundCloud.  When I saw him a few days later, I pulled him aside and we had a conversation about what I thought.

He seemed surprised that I gave more feedback than "it was good."


I try to value my students for their passions, whether or not they are academic.  I know that I need to do more of this.