Posted by Justin at 3:37 PM
There is an amazing amount of of candy that gets sold, stolen, given away and eaten during the Easter season.  Regardless of the plethora of size, shapes, consistencies and flavors, all of this candy can be boiled down to 2 categories: chocolate and marshmallow.

There are two main subcategories of chocolate candy, those being bunnies and eggs.

The bunnies are what cause the most problems. 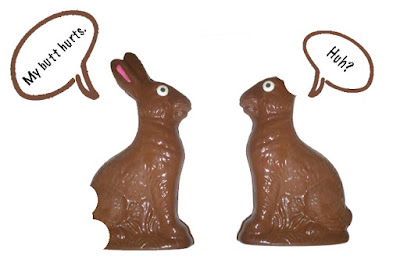 I would be willing to say that in the history of Easter candy, there has never been someone utter the phrase "Damn! I wish this bunny were hollow!"

No one wants hollow bunnies, and yet the vast majority of chocolate Easter bunnies are just that.  They are beautiful, intricate shells of promise and hope that, rather than be filled with joy and sugar, are instead filled with stale factory air and broken dreams.

If, in the course of ordering a steak dinner, a patron bit into the meat only to watch it deflate like a Patriots football, people would lose their minds!  And yet, we annually suffer the injustice of hollow bunnies without a peep!

By far, the worst part of these abominations is the false hope.  They sit on the counter, on the shelf, on the table and pretend to be REAL chocolate bunnies.  They tempt us with  promises of tooth decay and diabetic comas followed by stomach aches and days of ruined dinners.

Instead, it's the classic bait and switch.  They give us the appearance of joy and hope, but deliver unmitigated disappointment.

I am currently feeling like a hollow chocolate bunny.  I am doing my best to trick those around me into thinking that I am part of a joyous holiday, but I'm not.

I'm exhausted, frustrated, sad and worn down.  I feel as though I have failed so many of my students.  There are so many of them that I don't see as better off now than before they entered my class.  There are 21 days left in the school year and I know that I can make it, but it's going to be close.

It's going to be so close.


I also recognize that I'm being WAY too hard on myself.  I am not a miracle worker.  I have students who smile at me in the hallway.  Several told me that they missed me when I was out yesterday.  I have tons of former students who voluntarily come to my classroom when they have free time just to hang out.

A hollow chocolate bunny may be hollow, but it's still chocolate.  It's not as though you bite into the bunnies and get a mouthful of bees.

This has been a trying year.  I have many things that I want to work on this summer and, hopefully, will be more prepared for the fall.

At the top of my list is picking movies to watch that don't make me sob in parental despair at the inevitability of my children growing up.
Email ThisBlogThis!Share to TwitterShare to FacebookShare to Pinterest