In education, we talk so frequently about "what's best for kids" but almost never have the discussion about what that means.  Every person has a different idea of what that is and how it can be accomplished, but the lack of communication often leads to well-intentioned people butting heads.  It's so easy to fall into the trap of "this person is doing something that doesn't work for me.  They must be an idiot."

Most often, I see this happening in terms of discipline.

A scenario: A "trouble" student is found wandering the hallway without a pass.

The dean of students or principal could rain down holy fire on this child, giving the "tough love" approach.  The student would end up in In-School suspension.  "We have given you so many chances and you can't follow the basic rule of going to class on time."

What is more likely to happen is that student will get an escort back to class and a "talking to" about expectations along the way.

Providing disciplinary leniency for "trouble students" often feels to teachers as though they are being undermined.  It can feel as though it is an inconsistent approach to discipline and only helps those students take advantage of the situation.

"If we are going to have rules in place about being prompt to class, then they need to be enforced.  When you allow a student to wander in 10-15 minutes late, it makes it that much harder for me to enforce those rules with the rest of the class."

Fence-sitting students may fall off that fence.  "She is a terrible kid and they let her get away with all sorts of stuff! Why wouldn't they let me?"  And when we don't, suddenly we are being unfair.

We recognize that different students have different needs, but it often gets to a point where some students are taking advantage of the system, are seen in the hallway during every period and are never given consequences.

"Why would she go to class when she is simply allowed to roam the building all day?"  It seems to only reinforce bad behavior.

I used to be solidly in this mindset.  School is here to teach kids structure and how to survive in the workforce.  No boss would allow you to wander in whenever you felt like it, call her/him "weird as hell" and then storm out.  You would be unemployed fairly quickly.  It's important that, if expectations are set, that they be upheld.  Otherwise, don't set those rules.

The more I speak with other teachers, some in my district and some not, and the more I read (mostly Christopher Emdin's book) the more I have been questioning this approach.


"All he does is pal around with the kids who need to be in class, or need to be gone."

It's so easy for us to find fault in the actions (or inactions) of another person.  If that's not the way I want it done, it must be wrong.  If I don't understand the motivations and purposes behind those actions, that person must be an idiot.

A good teacher, a good disciplinarian, a good principal, will build relationships with their students.  The issues and disagreements come in when examining what each person thinks that looks like.  What looks to one person as unbearable amounts of leniency could very easily be seen as building trust and community.


Yesterday, I stood with some coworkers (who are excellent teachers) while they expressed concerns about the leniency that another staff member exhibits with the "problem kids."  I didn't speak up about the possibility that said staff member might be playing the long-game with those students, providing them with a safe place where they can vent energy and frustration, rather than becoming overwhelmed by the structures of a system that doesn't work for them.

It occurred to me that those choices and interactions are a microcosm of multiple political debates that we have in this country.

Side 1: Welfare exists so that the poor and down-trodden can get a hand up, assistance in improving their situation.

Side 2: Giving food and shelter to people does not encourage them to find (or work for) those things on their own.

The reality, as most people know is both of these are true. 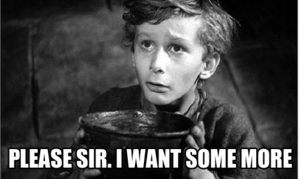 There will always be people who will be able to make a better life for themselves if they get assistance in doing so.  Does that mean we should give them everything?

It may come down to the fact that we love being generous, but only when it's our own idea.

I also recognize that I've only just left that position myself.  Had this thought been presented to me before I was receptive to it, my pushback would have been twice as fierce.  While I push my coworkers to join me, I need to sympathetic of where they are and honor their journey.

Just as students are all in different places, so are teachers.


Unrelated, if you could take a few minutes to fill out this survey, I would greatly appreciate it.
Email ThisBlogThis!Share to TwitterShare to FacebookShare to Pinterest