Posted by Justin at 3:30 PM
Tomorrow, I have jury duty.  Today, I graded physics papers and tried to get caught up on my astronomy grades while they were watching Interstellar.

"It's an excellent movie in a very different way than The Martian.  For one thing, you have to tolerate Matthew McConaughey's accent and weird bulging blood vessels around his eyes."

Even though it starts out a bit slow, the students were highly engaged and asked a ton of questions.  Sometimes, those questions were even directed at me!

It also occurred to me that the scene at the high school near the beginning of the movie exemplifies so many things that are wrong with the educational system as a whole.  I'm pretty lucky to work with so many people who work for the betterment of students rather than reducing those students to single numbers.

The physics kids continued to work on their playgrounds.  There are some fascinating discussions going on around design and safety.

The modular seesaw is particularly interesting to me.  In creating a seesaw that adjusts for people of different masses, there seem to be two basic ways to set it up.  Either you adjust where the seats are, or you adjust the fulcrum.  So far, judging from the groups with whom I've worked, it seems easier to adjust the seats, but I need to do a few more calculations.


I know I've said this before, but I think it bears repeating: If you can get your students to draw for you, do it.

You won't be disappointed. 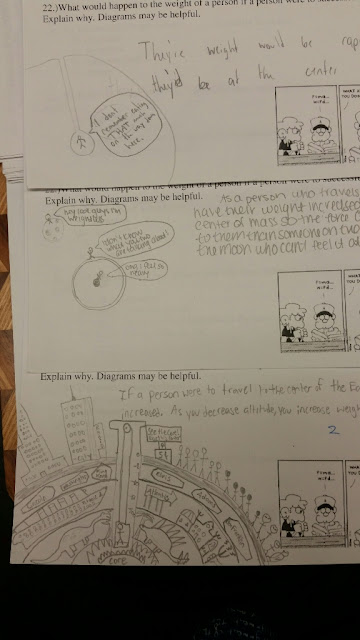 And make sure you draw back at them.

They didn't as well on this particular test as I would have liked, but there is tons of time left in the year while they work on their playgrounds to answer any questions that they might have.
Email ThisBlogThis!Share to TwitterShare to FacebookShare to Pinterest