Posted by Justin at 5:13 PM
With progress reports going out on Monday, our grades have to be in by 3 pm tomorrow.  As a result, I have to actually grade some stuff.  I have two geometry projects and a quiz in each of my classes, but not much else.  So today is quiz day for everyone.  The math 8 kids will also have their homework checked in a clump.

During the geometry quiz, I commented on how these kids, the elite matheletes in the school, don't own calculators.  Really.  So I passed some out.  One girl who does good enough work but refuses to really acknowledge my existence or make eye contact asked for one.  I made her give me a fist pound AND blow it up before I gave it to her.  My demands that she do so got increasingly loud and boisterous while she laughed, embarrassed and refused.  She told the kid sitting next to her to do it, but I told her that wouldn't be acceptable and took that kids calculator until she hit me up!

I used to be convinced that I shouldn't be myself in front of my kids.  I was worried about crossing the line into having too much familiarity so I gave them nothing.  My first few years, I didn't tell them I was married or where I lived or talk about my life in any way.  It was exhausting.

This year, I will tell them all sorts of things and I have been silly and fun and interesting and it seems to be paying off.  I am getting better interactions with my students and they know that I'm an actual person.  It was very scary at first and left me feeling vulnerable, but now I'm having such a great time, I can't imagine going back to how it was.

It was suggested that I write a post about all of the ways that my educational worldview has changed and I would like to.  Well, here's the first bit (second, I guess, if you count student interactions.)

Grades:
The scores on the geometry tests were not great.  It was an open note 20 questions quiz. 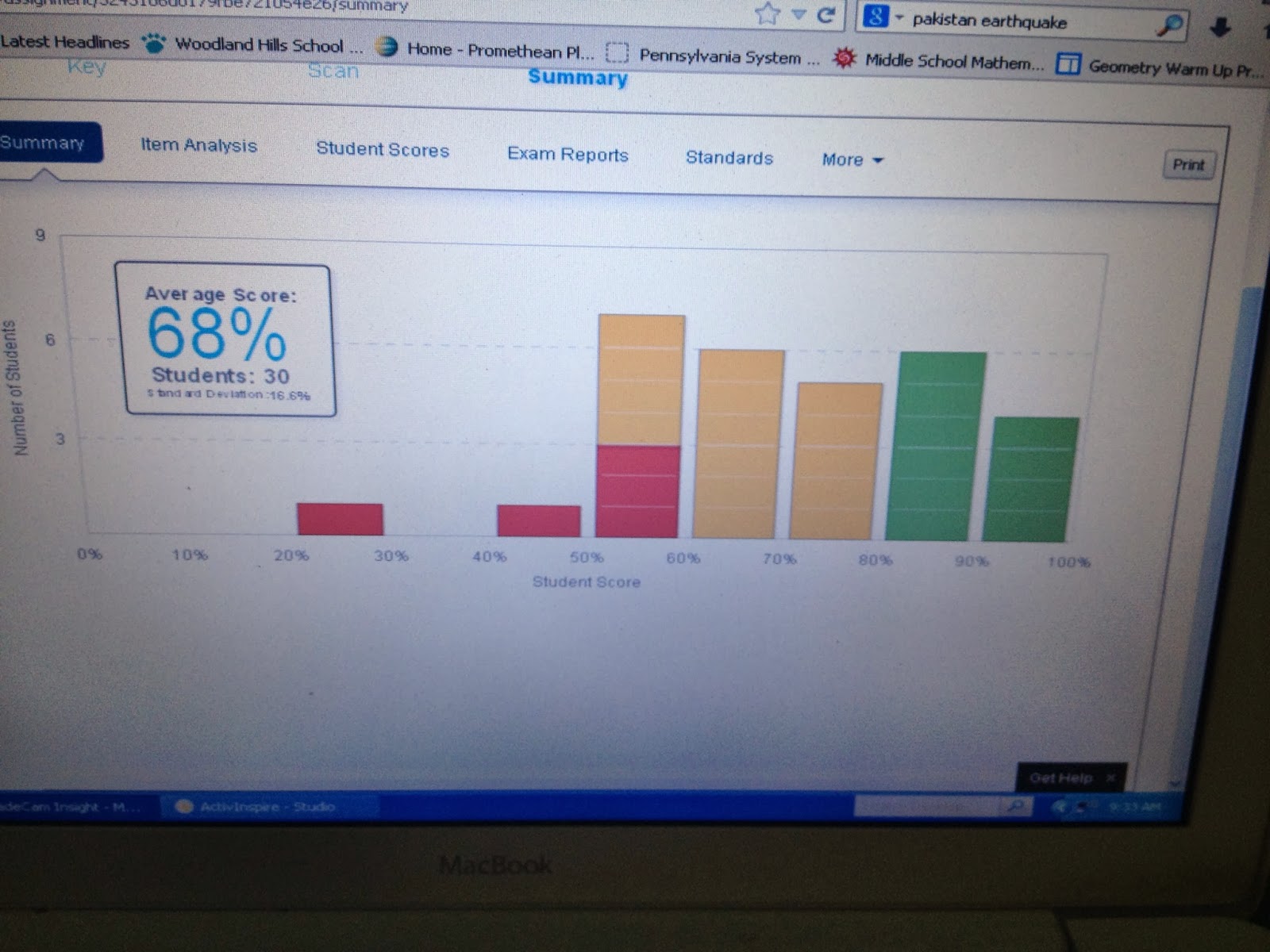 The kids were VERY upset.  I don't blame them.  We've been having a great time in class, learning a ton of stuff so a crappy test score feels like a huge blow, to me as well as to them.  We talked about it after I graded them.

Me: "Does a low test score change what you've learned? Does it make you a bad person or a bad friend?"
S: "No."
Me: "Does it make you stupid?"
S: "Yes."
Me: "Really? Were you stupid two hours ago?"
S: "...no."
Me: "But the test MADE you stupid since then?"
S: "...no."
Me: "Right! People can do poorly on tests for any number of reasons, not the least of which is carelessness.  You are bright enough to be here, or you wouldn't be. Up to this point, many of you have been able to get by with a minimal amount of studying and work because you were smart enough to coast.  The same thing happened to me.  I was a straight A student until about 7th or 8th grade (it was actually 5th) when my brains alone couldn't carry me.  At that point, I had to learn how to do work and study, not just be smart.  (I didn't even do that until college) I will help you with all of this.  Never EVER let a test upset you.  It doesn't change your worth.  All it does is gives you information on your strengths and weaknesses.  Take that information and learn from it.  Improve and be stronger."

In line with my new philosophy on grading, I made them a deal.  I told them that I would put the grades in (although I might forget until after progress reports are due) and they would spend the weekend working on the tests.  When they come in on Monday, there will be a new score sheet on their desks.  The warm-up on Monday will be to transfer their answers to the score sheet and I will replace their old scores with the new ones.  I also told them that I would expect them to show all of their work as well.

I have such high hopes for this group and I know that they will rise to the challenge.

When I offered the same deal to pre-algebra, half of them said that they would just keep the score they had, even the girl who got a 50%.  What do you do for kids who think that failing is good enough?  As many times as I try to explain to them about how bright they are and how much potential they are wasting, I can't seem to get the point across.  I know that my mom and my own high school teachers are screaming about irony as they read this. 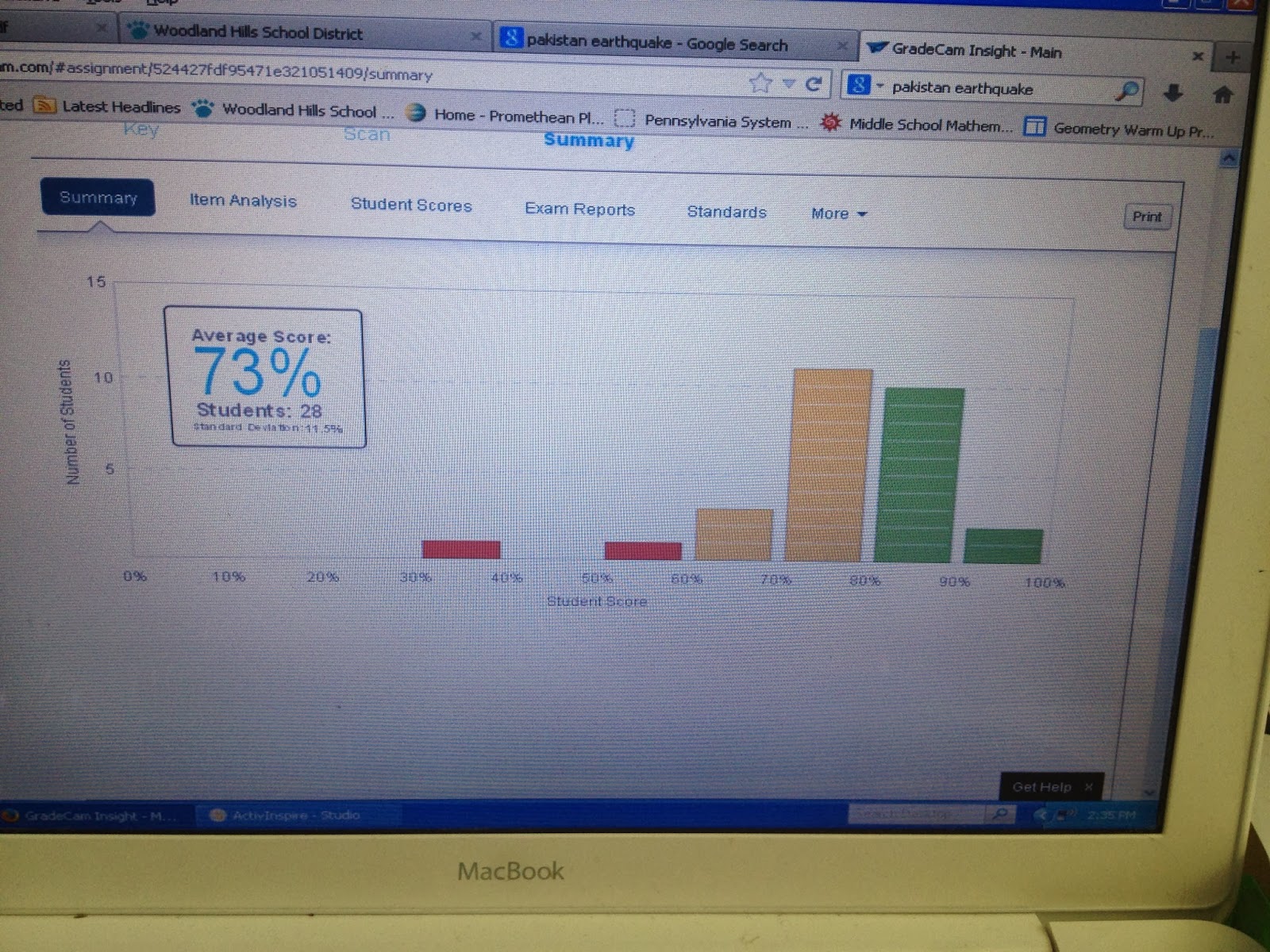 This right here is why I didn't want to put in grades.  Kids who would work hard to get the right answer suddenly settle for a 70%.  How do we combat this as an institution and how do I combat this as an individual teacher.  My kids were doing well with just my encouragement.  Well, maybe not "well" but they were working and improving.  Now, because it was decided that we have to give them grades every 4.5 weeks, they see their situation as hopeless or "good enough."

I find it horrifying, but not surprising, that grades actually have a de-motivational effect on students, especially students of traditionally lower ability.
Email ThisBlogThis!Share to TwitterShare to FacebookShare to Pinterest