Posted by Justin at 4:16 PM
It was my absolute pleasure today to host Steph Reilly for a few hours before her conferences.  She joined my geometry class in an amazing exploration of slope AND she brought more whiteboards! HUGE ONES!!  And speaking of slope: 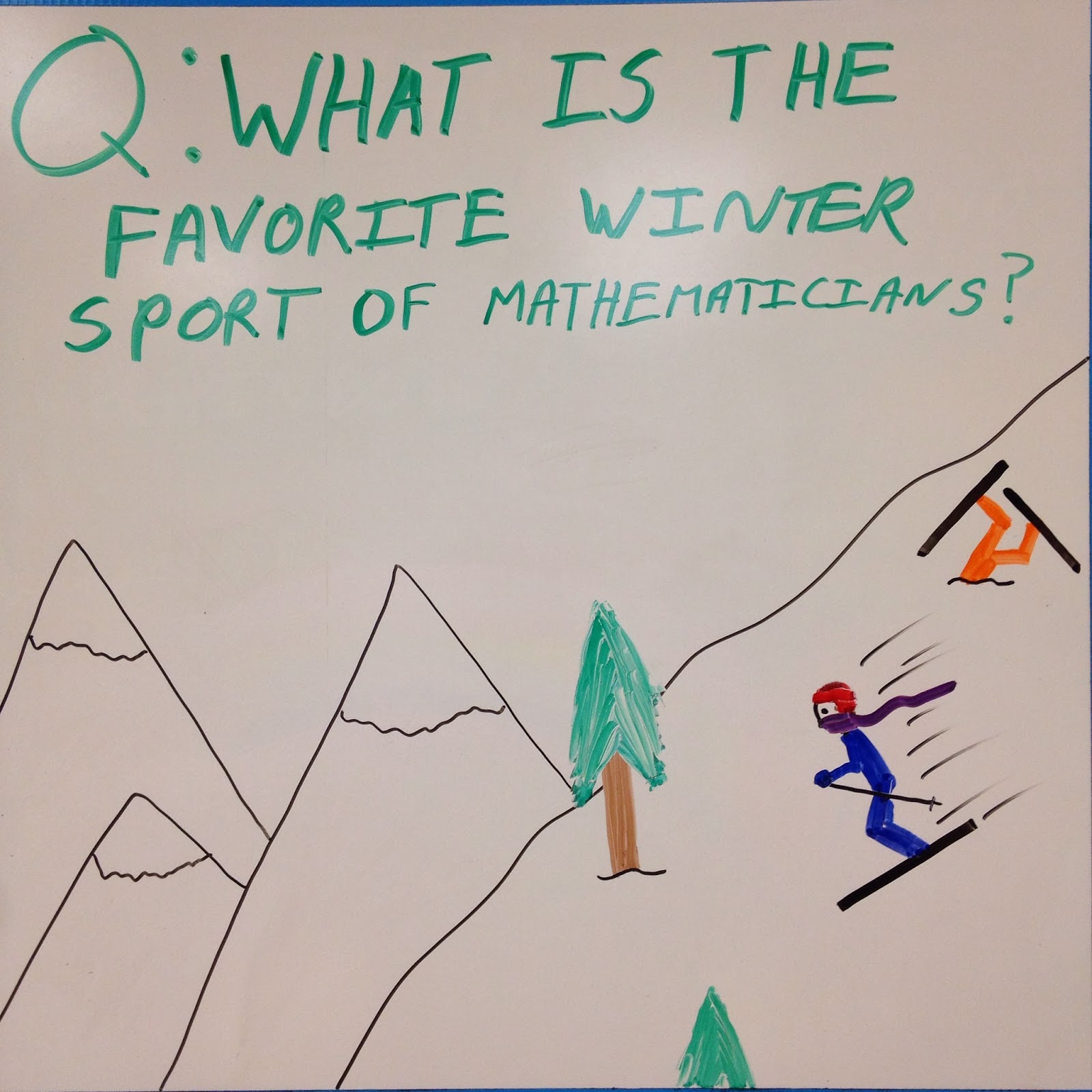 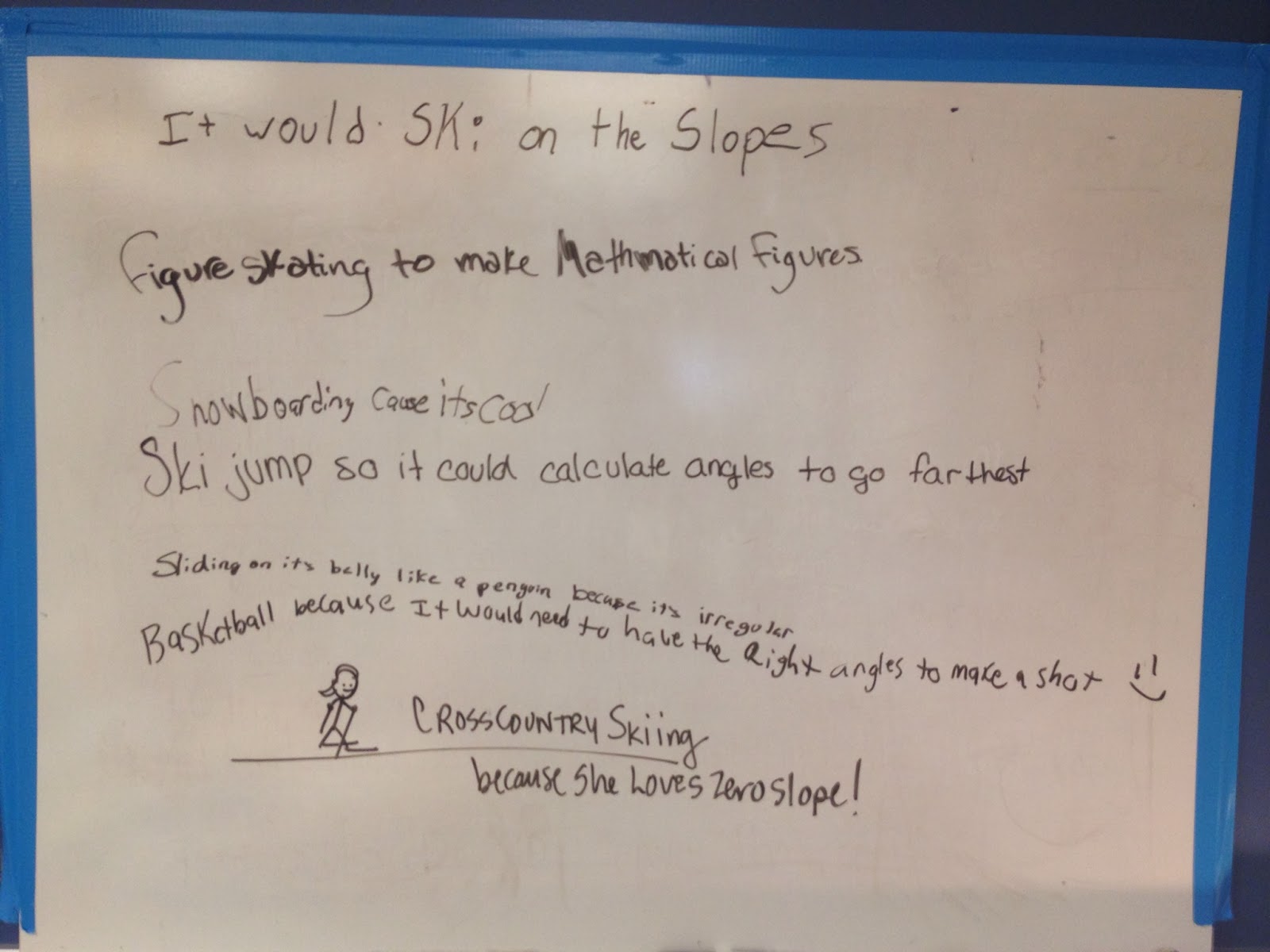 Our warm-ups was to prove that two vertical angles were congruent without using the vertical angles theorem.  I didn't ask them for a formal proof, but I did make them justify each step with a theorem or property.  The ensuing discussion was excellent and emphasized multiple ways to get to a result.

Then we began our slope exploration

As Act 1, I asked the students to look at an example of a coordinate plane with a line, but no numbers or units, and tell me what they noticed.  They gave lots of the basic info about lines and axes.  Since they weren't getting where I wanted, I changed my question.

"What do you notice is missing?"  I finally got someone to say numbers and units.
"Do we need those?"

We then began talking about the Americans with Disabilities Act and the regulations for slope for wheelchair ramps.  We talked about why those regulations needed to be in place and what a slope of 1/12 might look like.

I told them that they were going to measure 5 ramps in the building to determine whether they met ADA regulations.  Right before we left the room, I asked "So, you all brought tape measures, right?"

Since none of them had, I asked how they planned to measure.

"We could use shoes and pencils and pens, right?" "What about the tiles on the wall?" "The bricks!"

Finding Slope - Data Sheet.docx
So we were off!  Three ramps in the hall, one in the auditorium and one outside were our classroom today.  The kids split off into groups and began taking measurements and discussing validity of their strategies.

One student made the observation that the railing was parallel to the floor so if he found the slope of the railing, it would be the same as the floor.

Several students tried measuring the slope of the auditorium ramp by walking up it and counting the number of steps.  Mrs. Reilly helped nudge them in the right direction by asking "Are you measuring the rise, or the run?"

Over the course of the next hour, students measured, debated, calculated and had an awesome time DOING MATH! 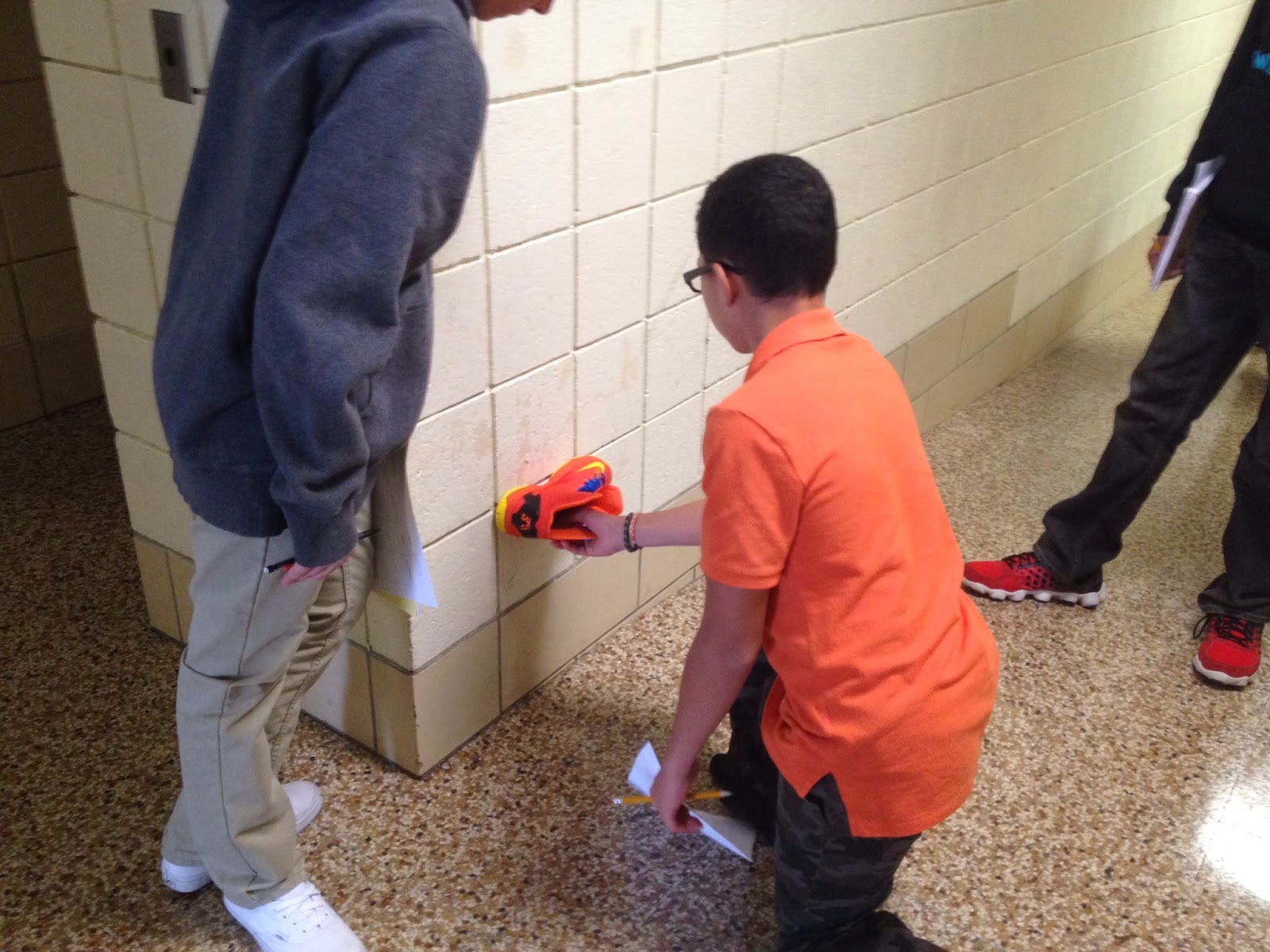 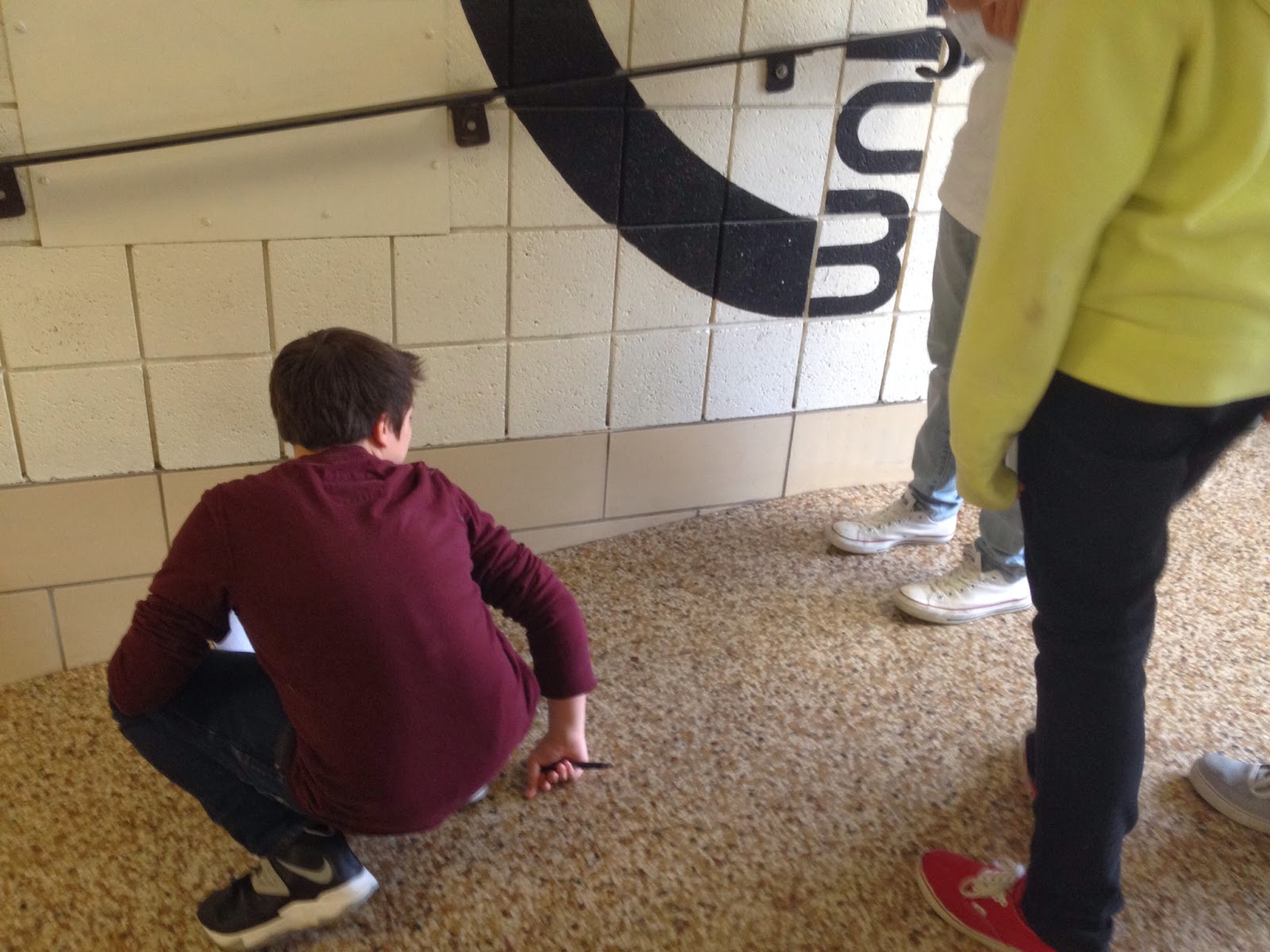 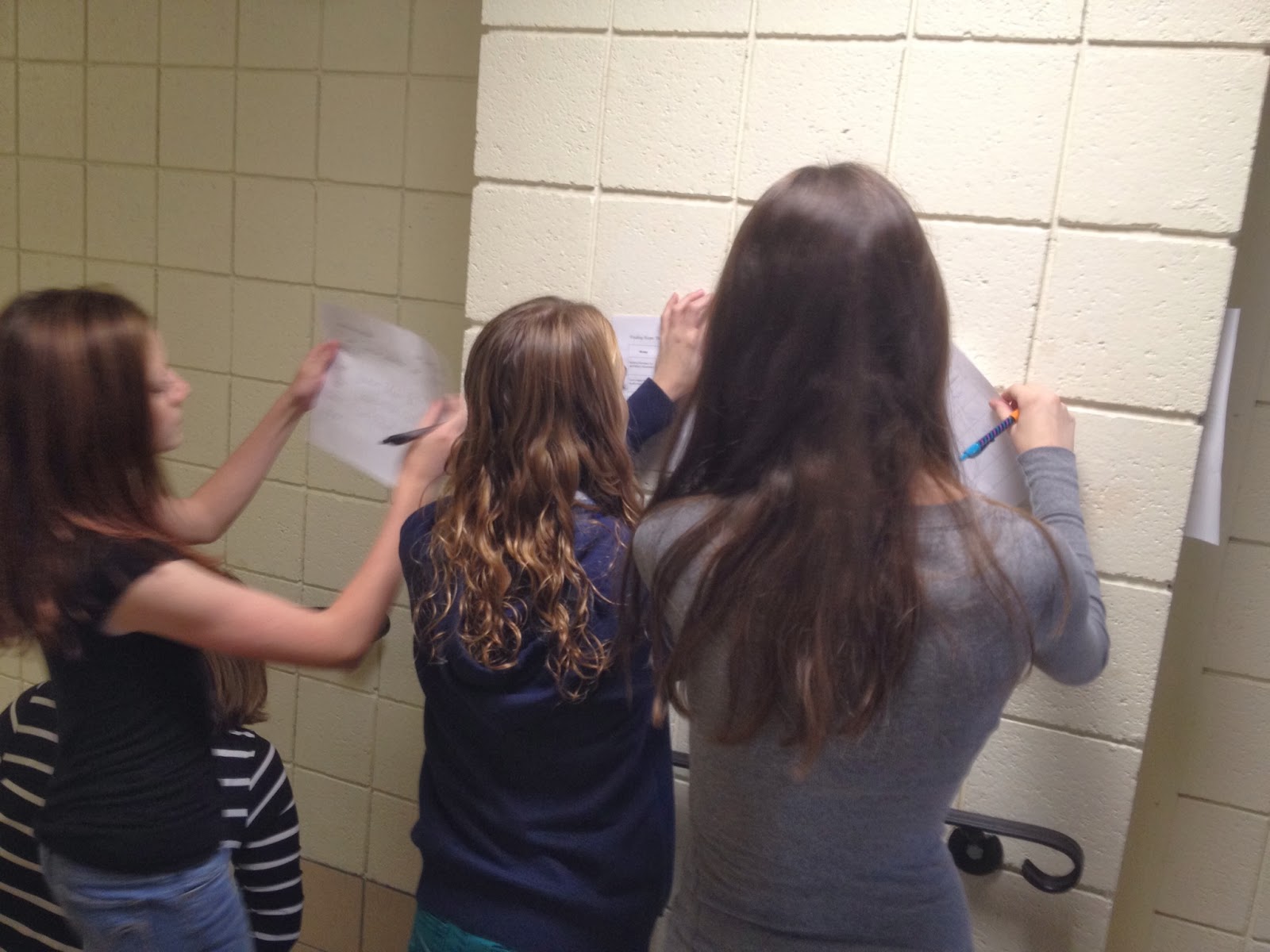 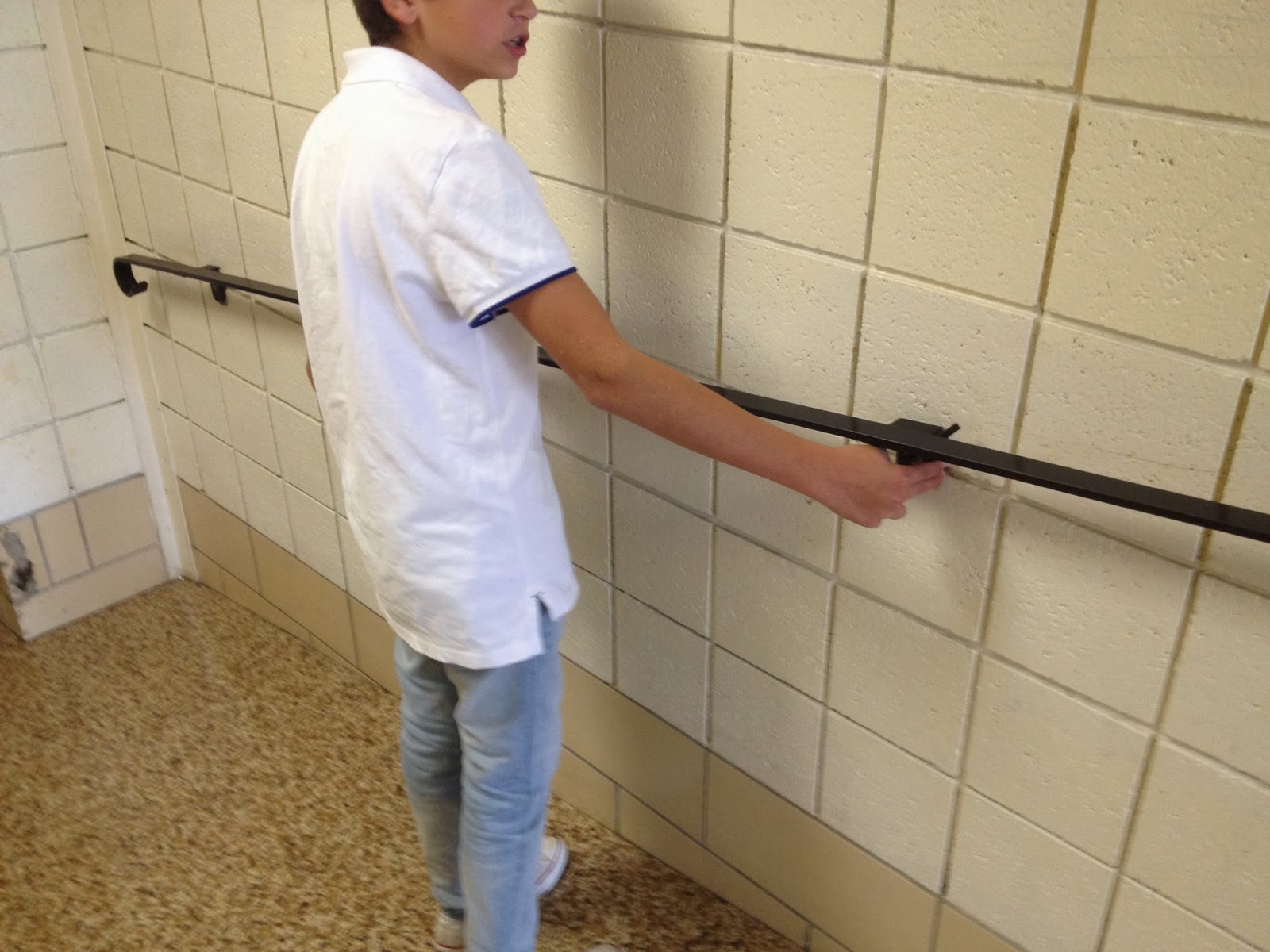 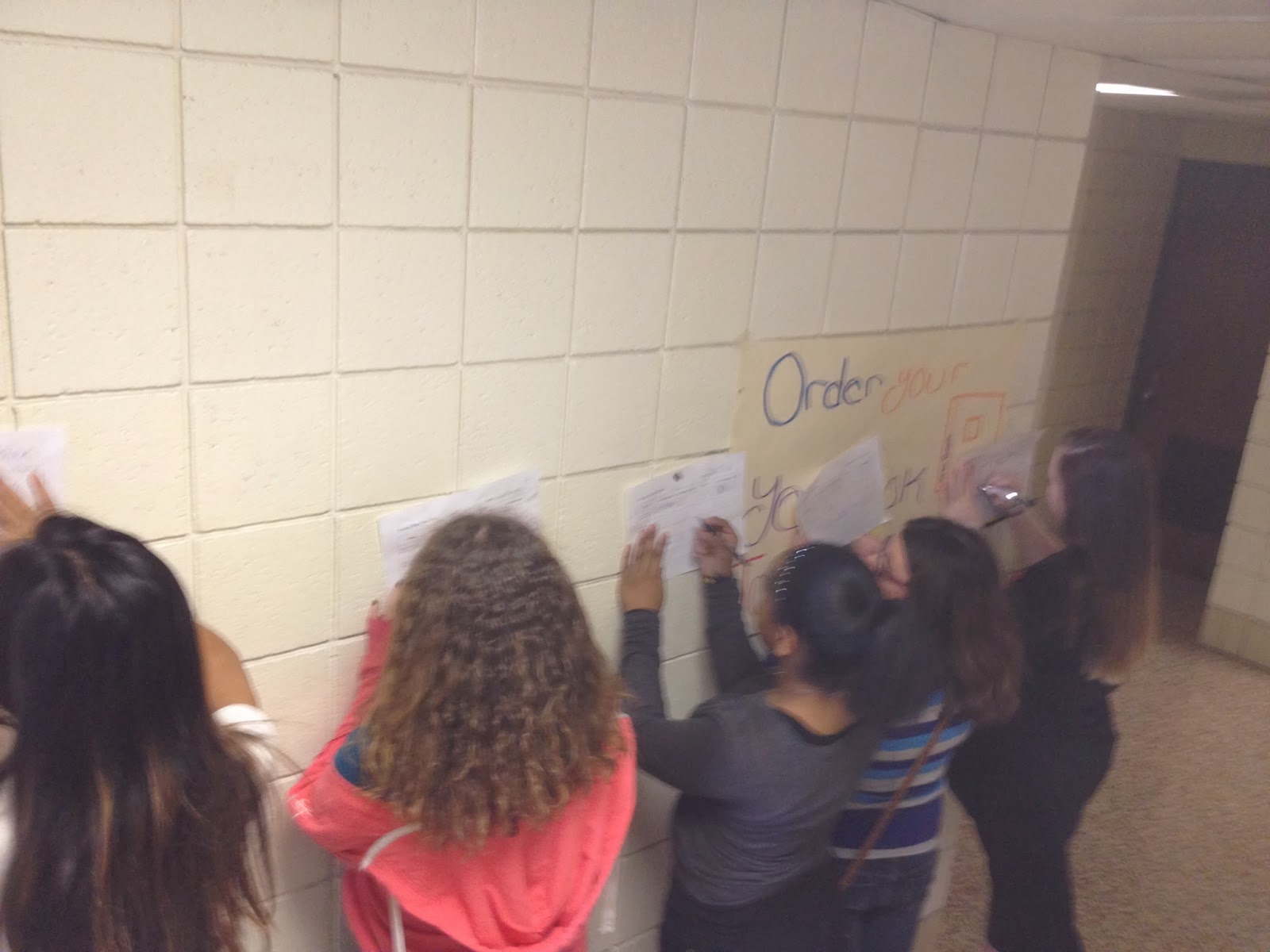 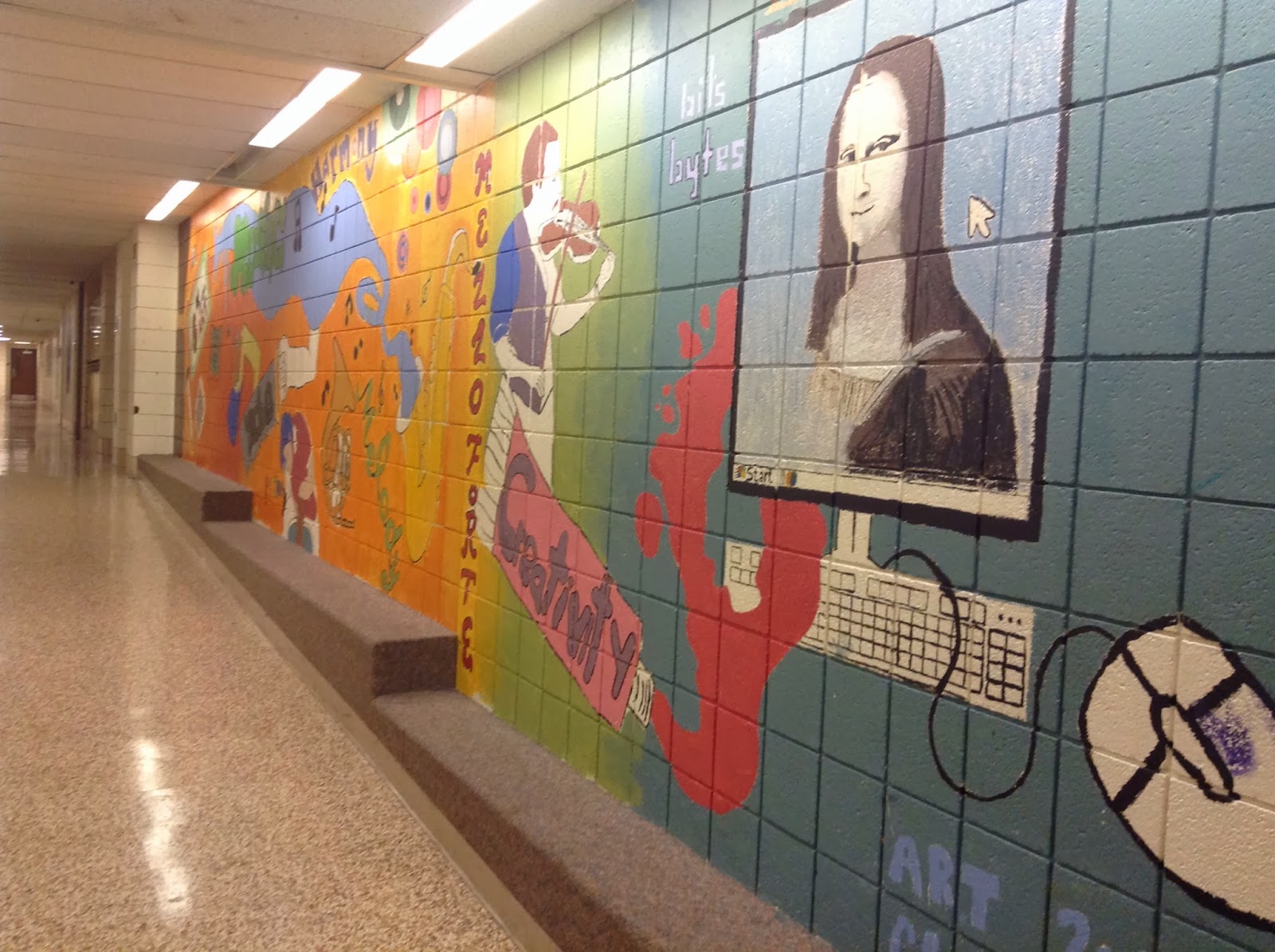 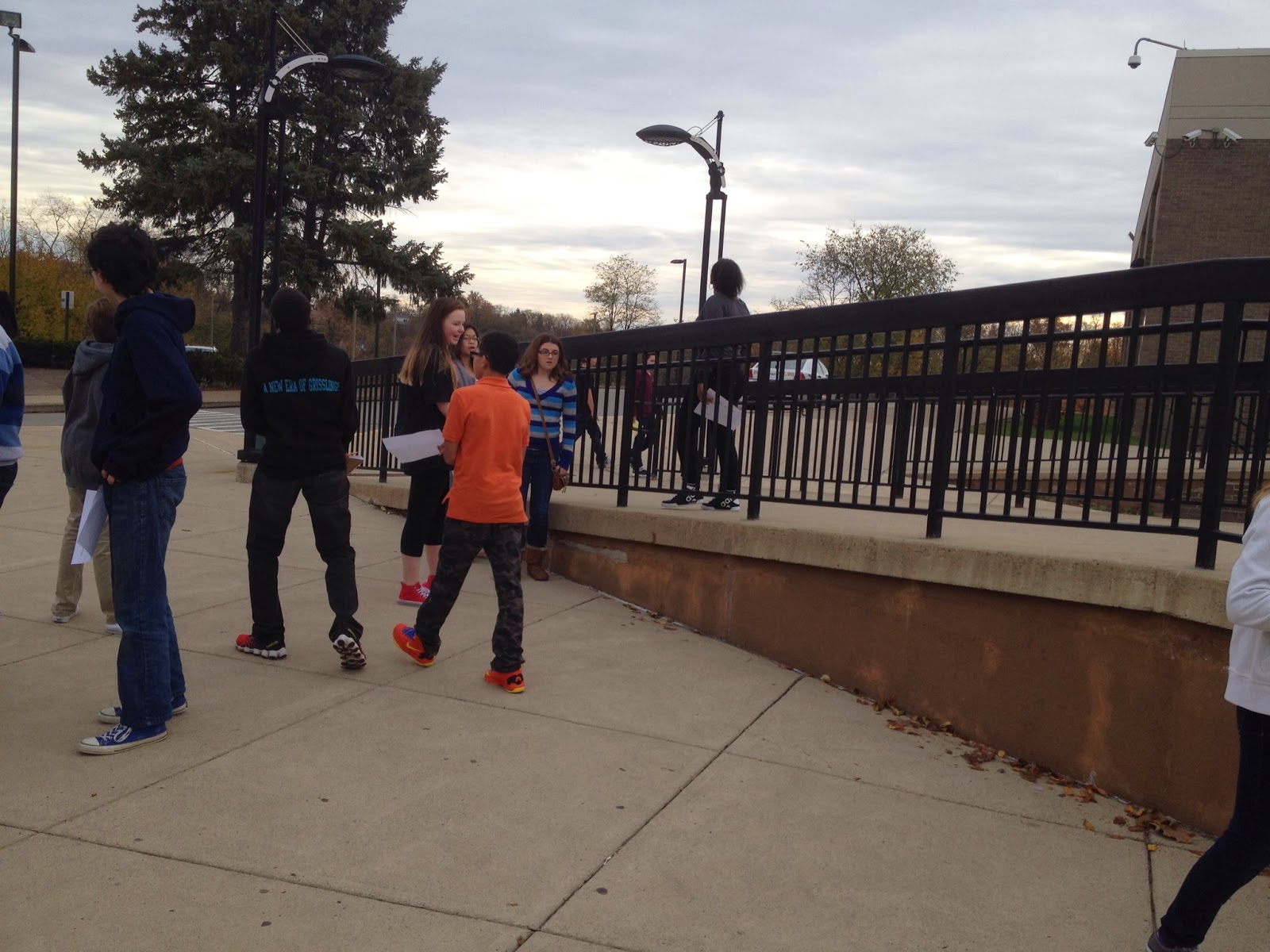 As students finished, I sent them back to my room to discuss their findings and methods with other groups.

When everyone was finished, we reconvened.  I asked specific students to talk about how they took their measurements and why they think they may have found a different answer than someone else.

One student said that in order to measure the slope in the auditorium, they started at a metal support of a chair, went up one pencil length and then over until they hit the ground.  Some students used their shoes.  Some measured in "Sophies" or "Isabels."

The final discussion back in the class was, I thought, the best part of this.  The students were able to talk about what methods they used and what problems they found.  I had several explain their strategies in detail.

I spent a good amount of time debating how much introduction to give them.  I wanted them to do this activity as an exploration, but I didn't want them to be completely in the woods.  In the end, I think I did an acceptable job of allowing them sufficient freedom while still having certain requirements for the project.  I also think that the introduction and review of slope before we got started was VERY helpful to direct their thinking without telling them what to do.

Overall, I think it was a success and, maybe if I can trust behavior, I can try it with the pre-algebra kids a little later in the year.

The pre-algebra kids spent the first of our double periods reviewing the homework on scientific notation.  I had them put their answers up on the board and then we discussed them as a group.  For the second period, we got to use some technology!

There was an open computer lab, so I took my 5th period down and had them look up recipes for their Thanksgiving dinner project.  They worked beautifully through the whole period.  I attribute this to the fact that I let them listen to music on headphones IF they worked.

Sadly, there was no computer lab open during 9th period.  So I get the iPad cart and had them working on those.  When I handed them out, one of my students looked at me in awe and said "I've never touched one of these before."  It was an interesting counterpoint to me thinking that these kids take tech for granted.

They worked VERY well and I gave them some candy to show my appreciation. 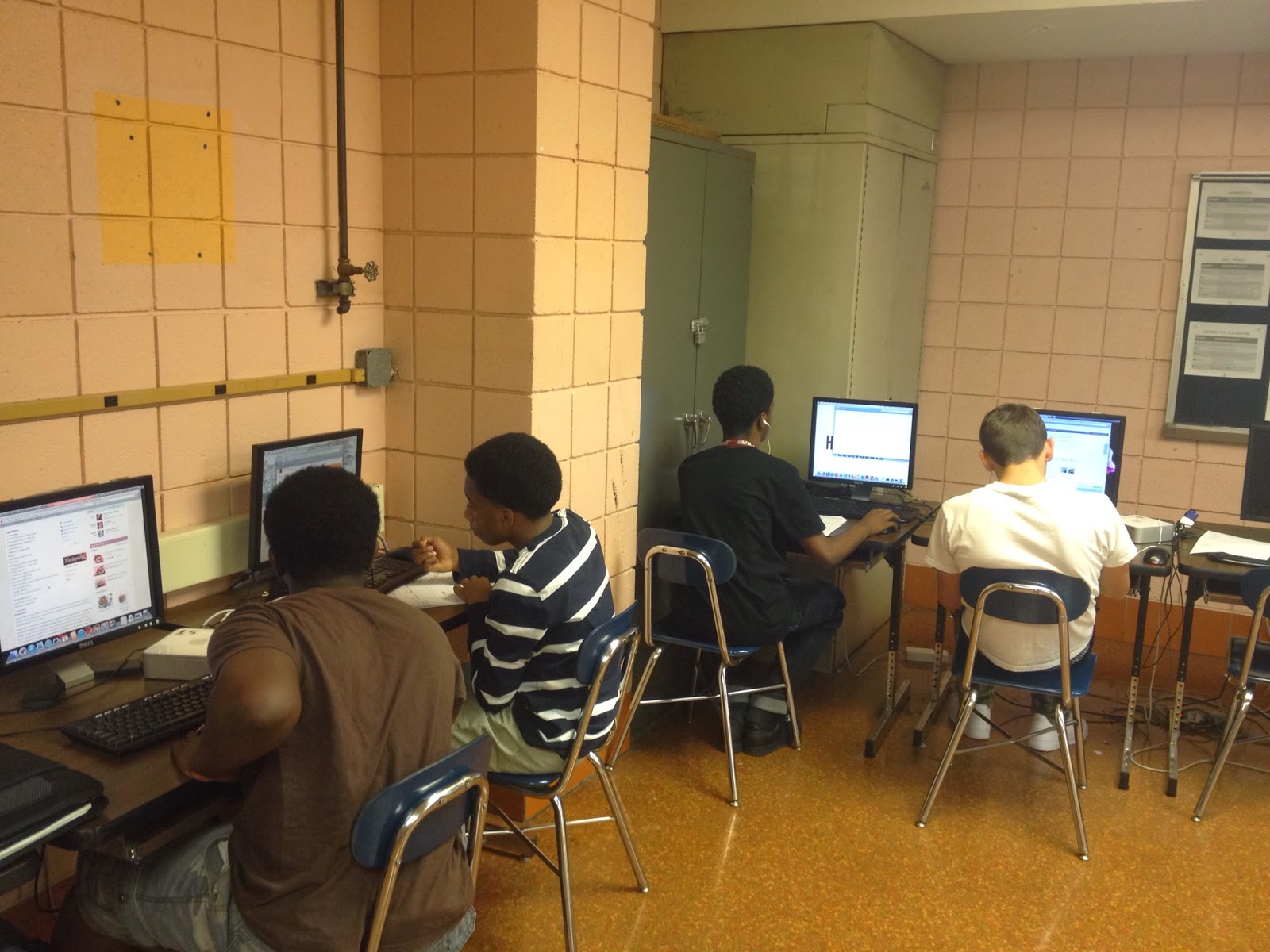 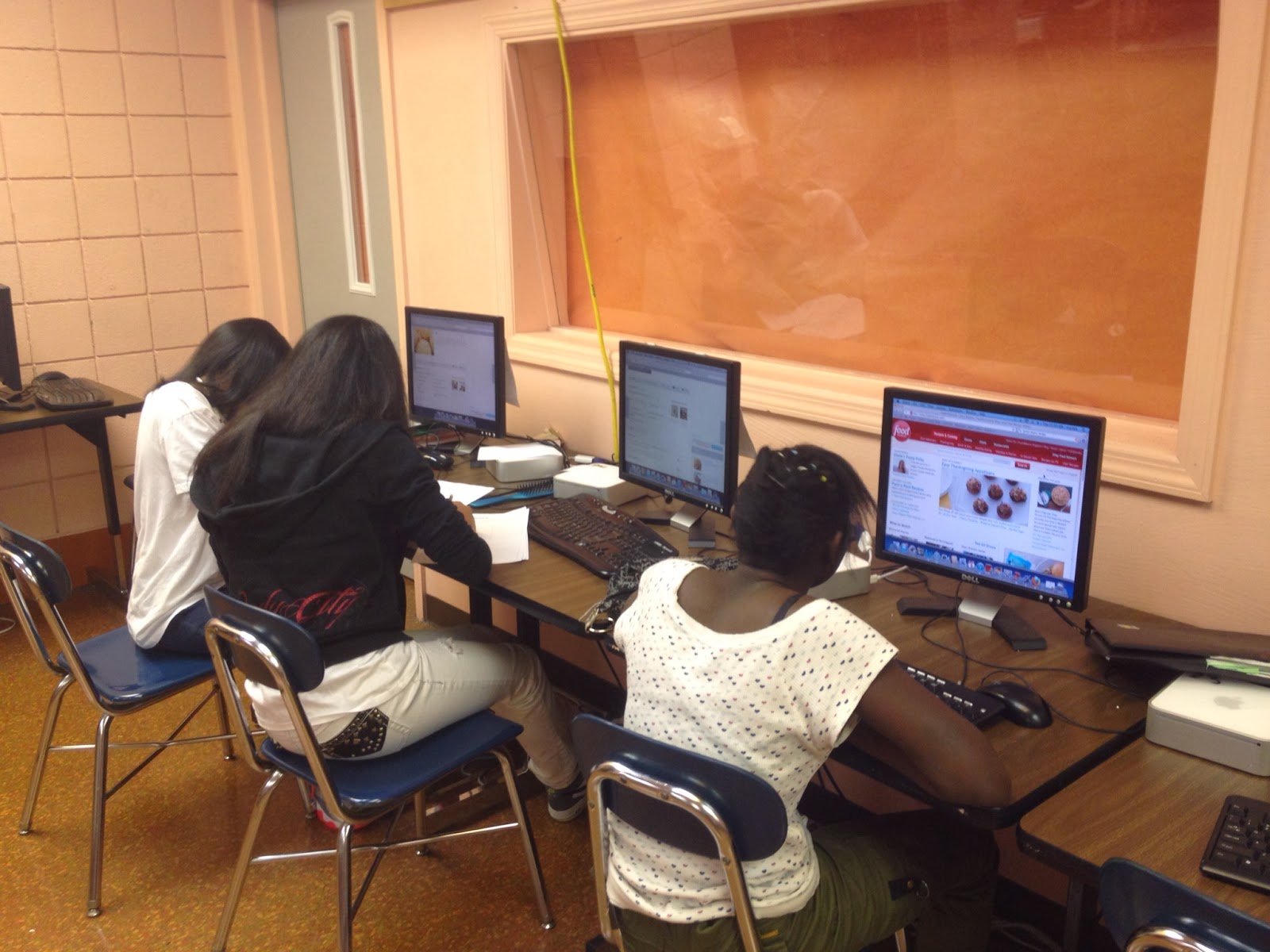 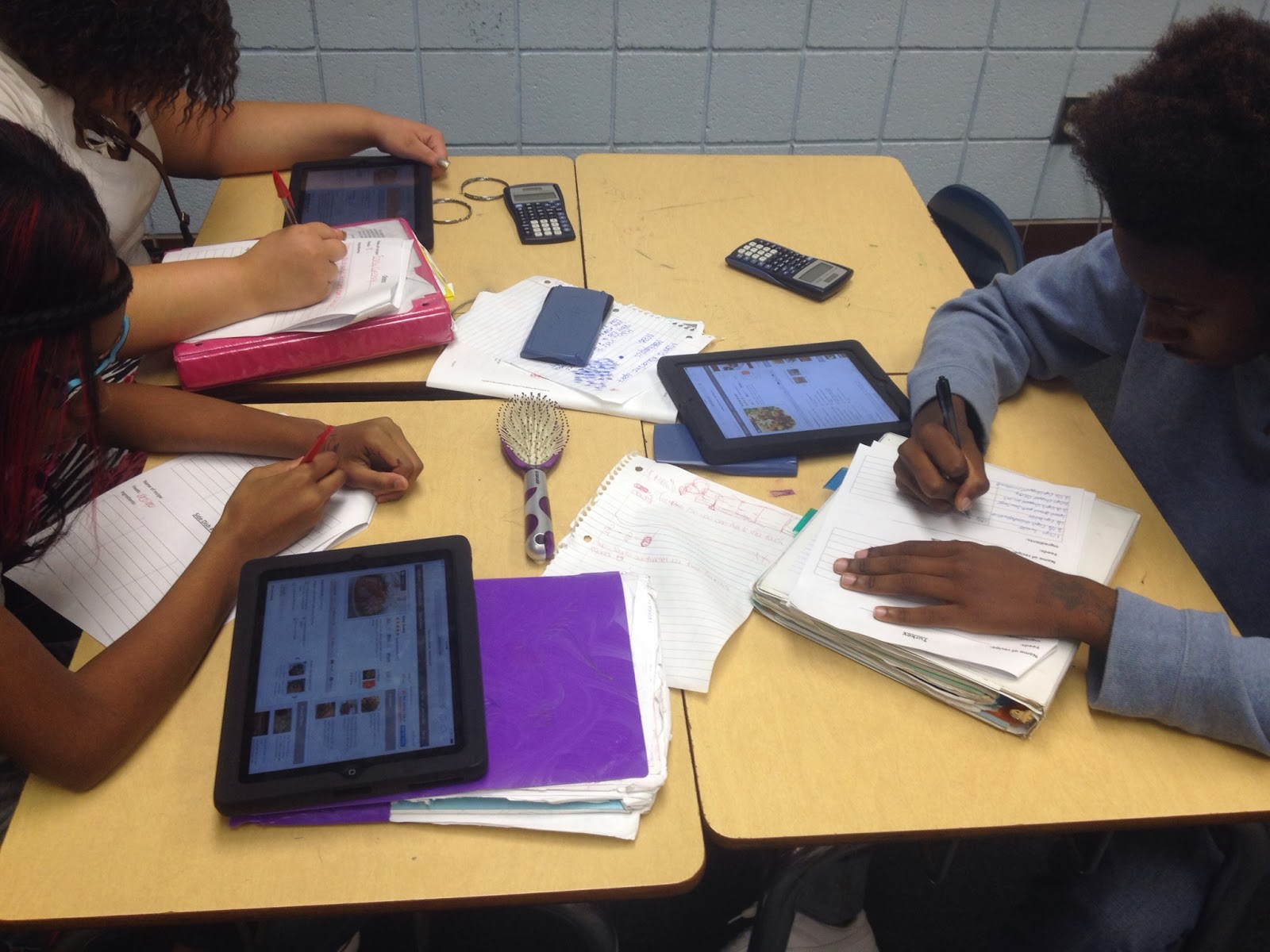 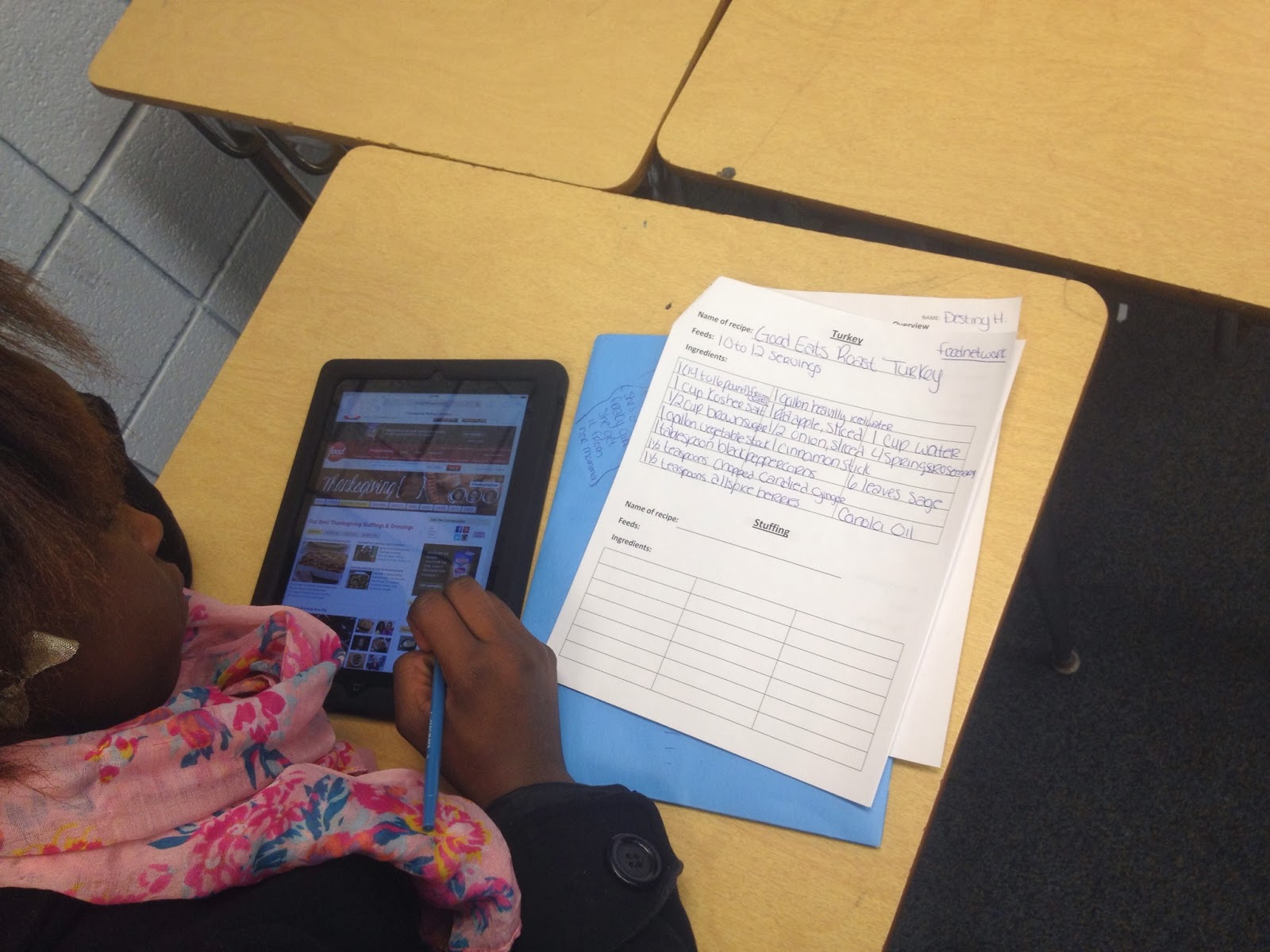 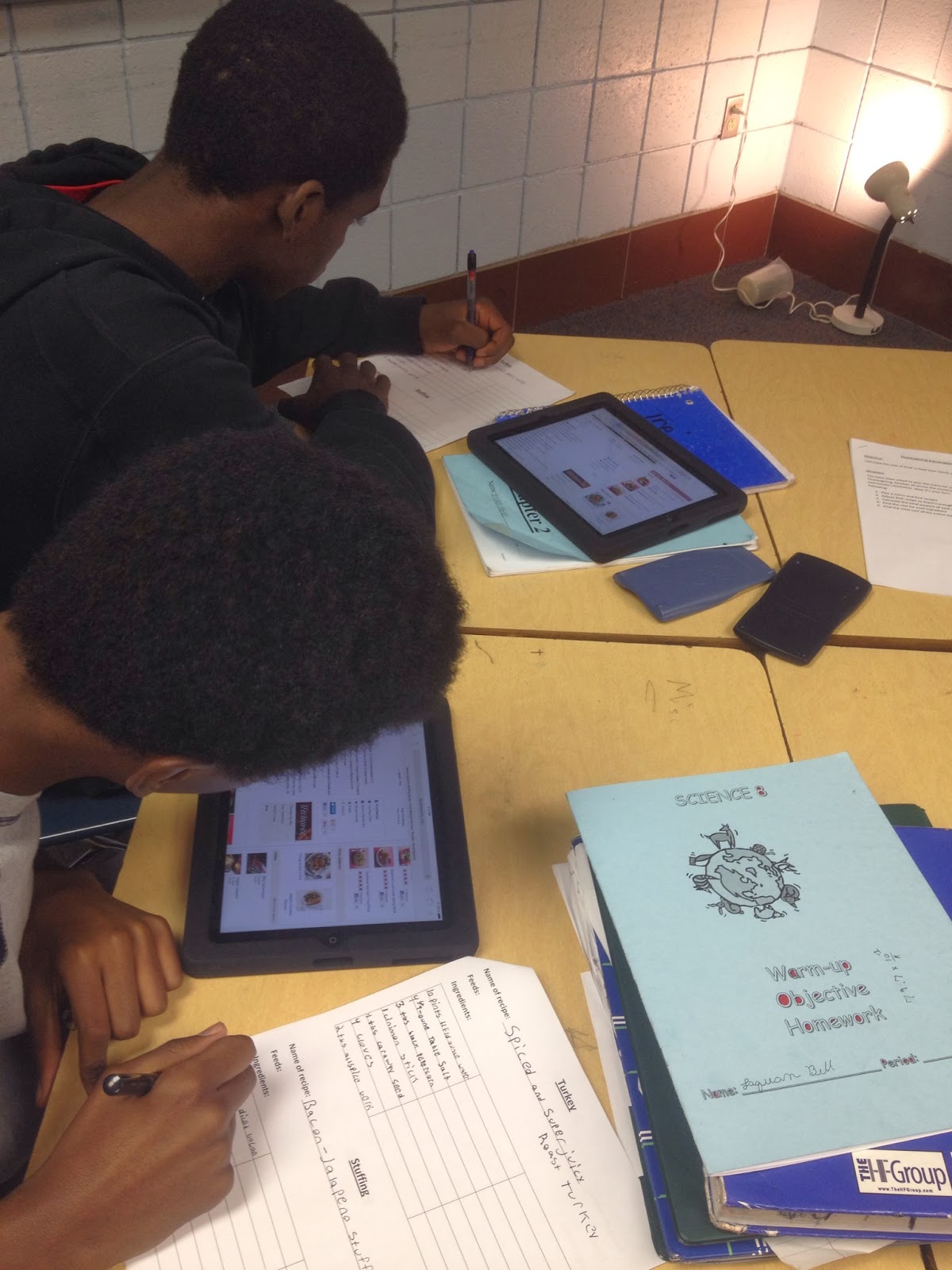 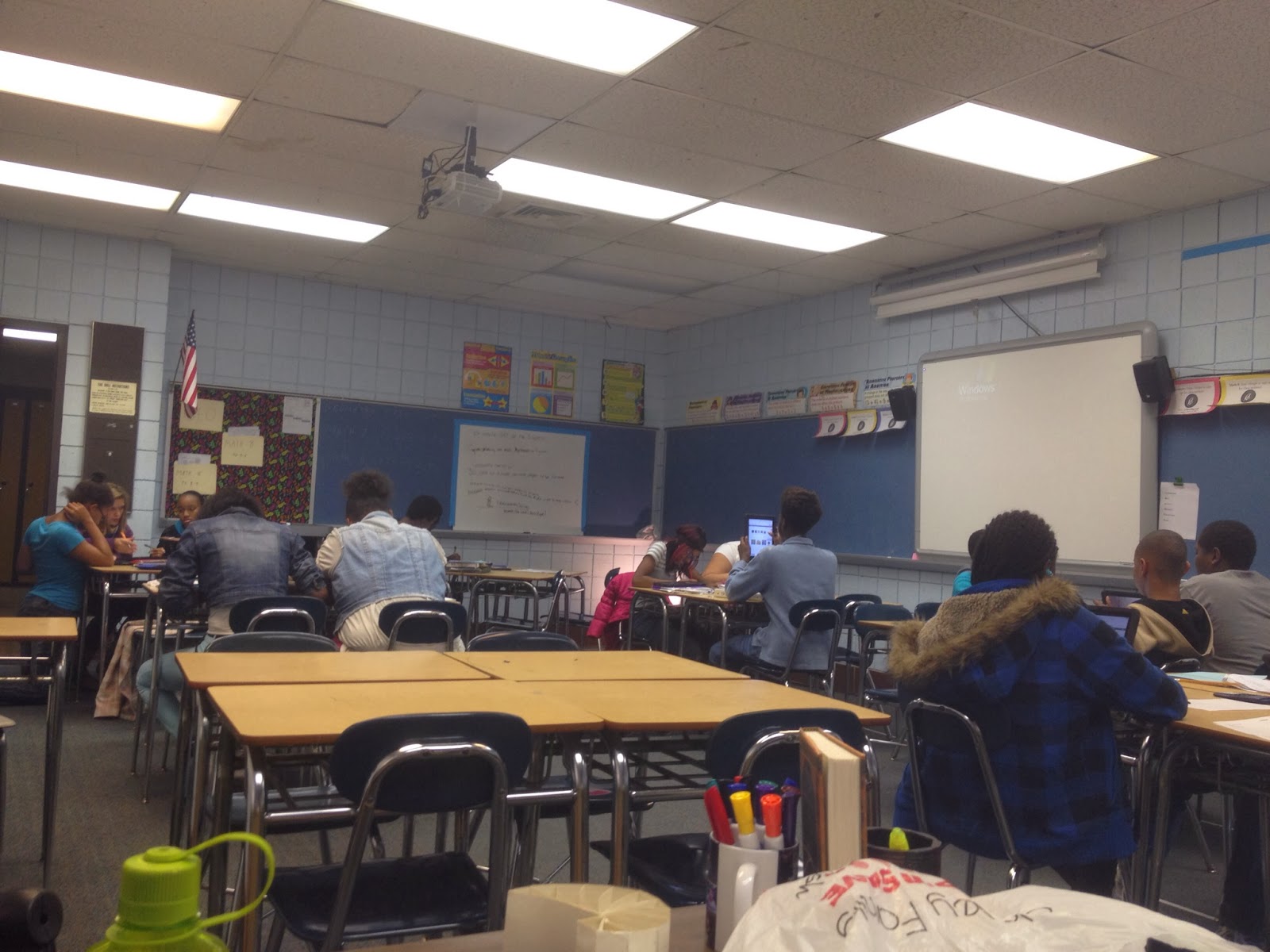 Much of my day today consisted of watching students learn and explore.

It was a great day and I'm so grateful that I had someone to share it with me! 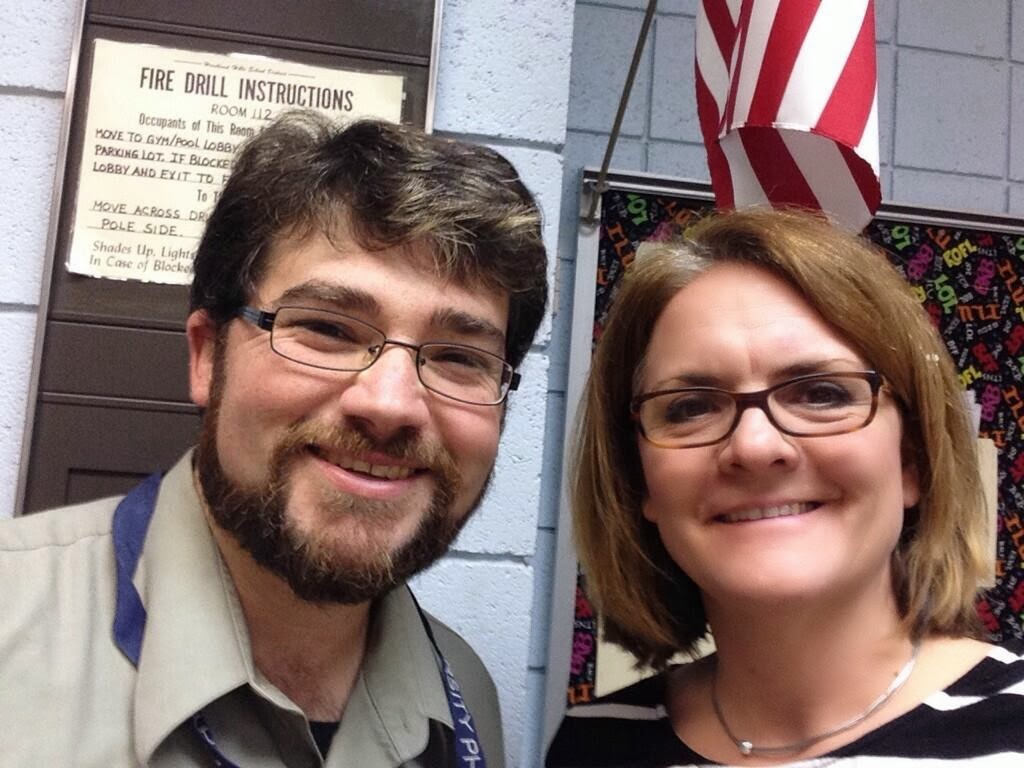