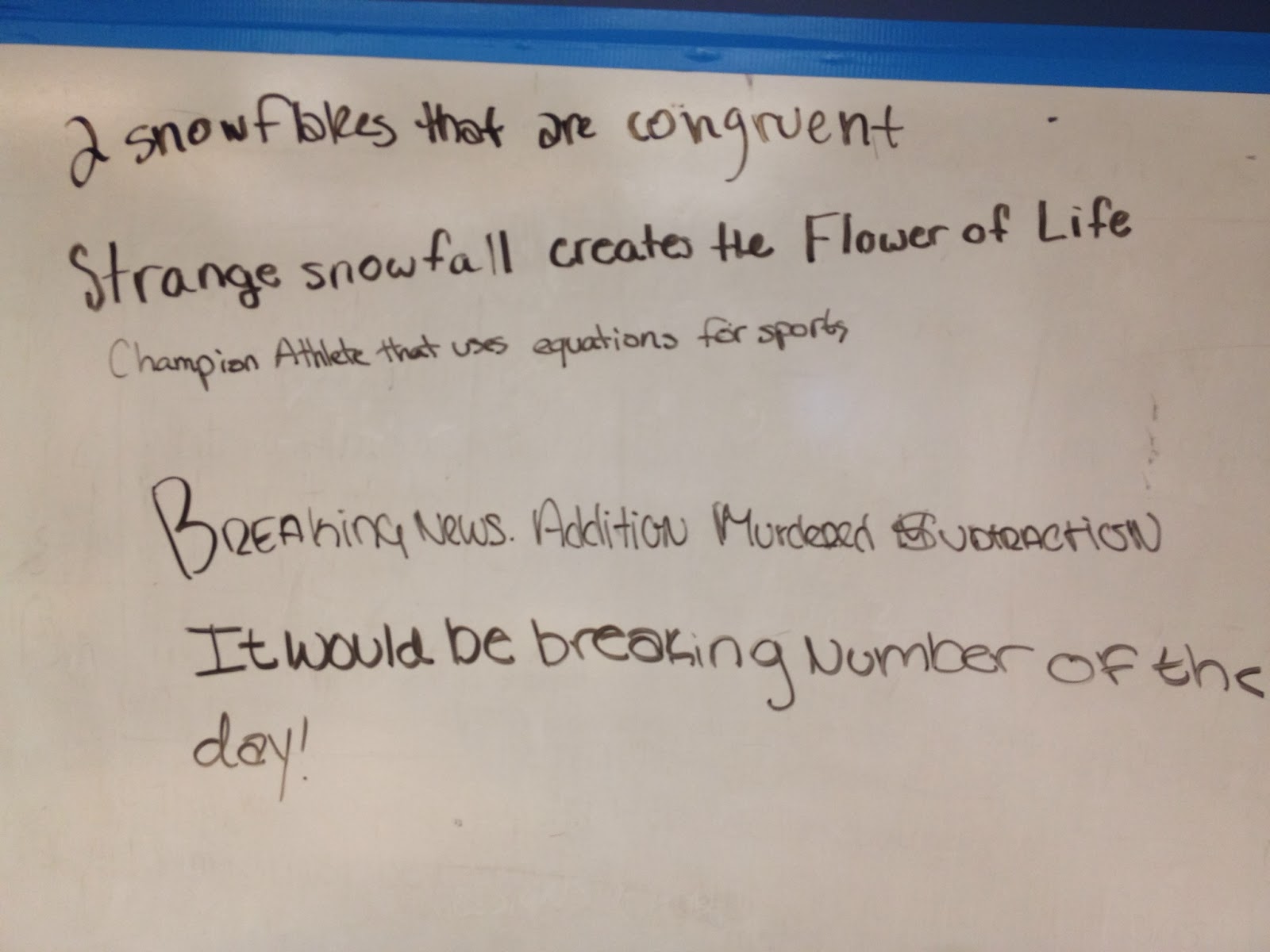 I have never claimed to be perfect.  I don't think I've even claimed to be good.  The whole point of this reflective blog is to help me to become the teacher that I want to be.  It gives me a chance to take a step, take stock of my thoughts and improve upon them next time.

Today was a day when I was reminded that not all students are equal and cannot be treated as such.  This is not to say that they should not be treated fairly, but I recognize that fair and equal are not the same.  So, this is a tale of two classes: 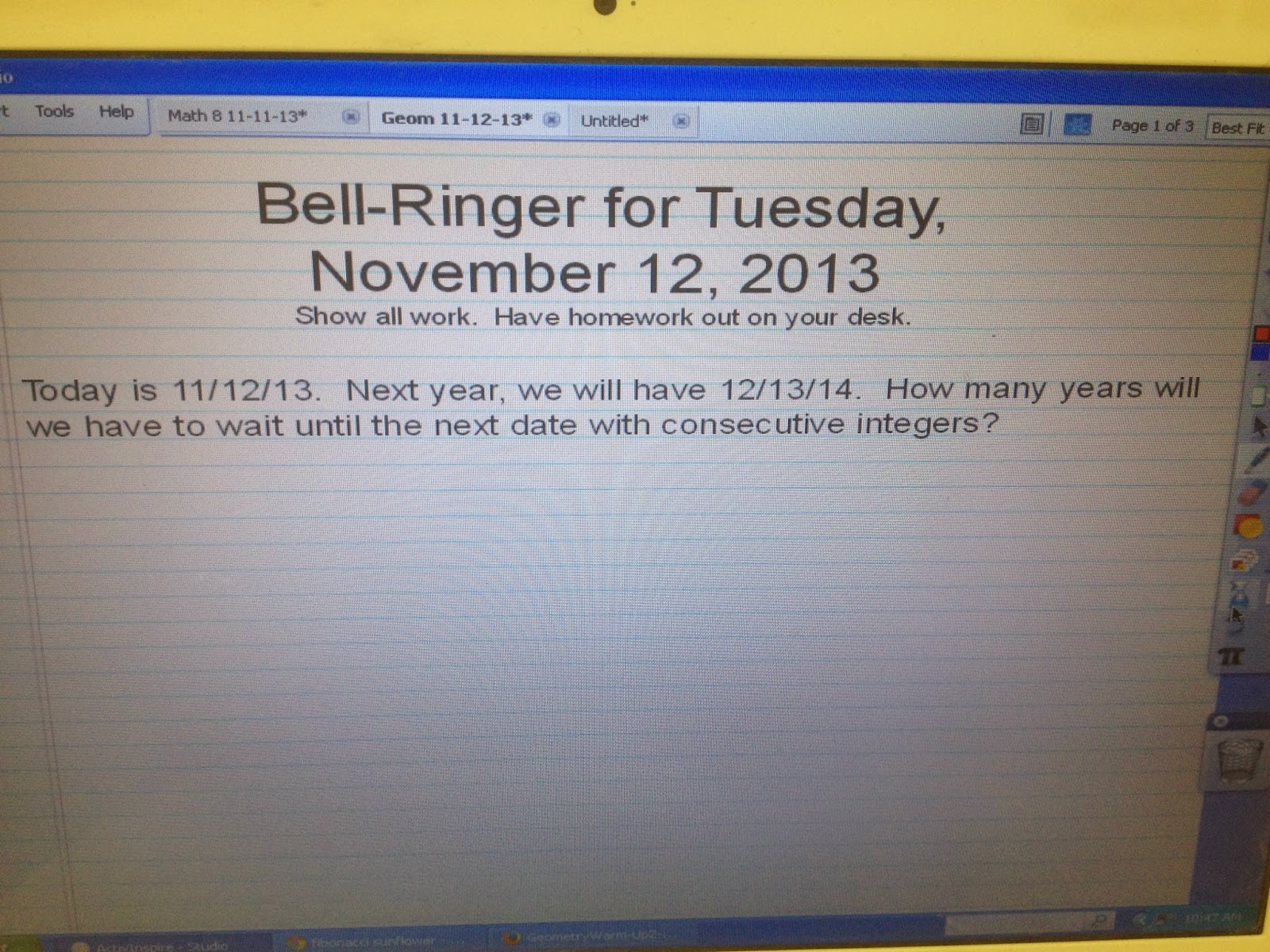 In geometry, we did the warm-up, discussed the various methods that students used to solve the problem and moved to our review game.

I will happily give credit to @MissCalcu8 for Balloon Pop and to @NathanKraft1 for his hatred of review games!  Basically, you split the class into teams and give each team balloons or tokens, or something along those lines.  Then you begin to ask questions.  If a team gets an answer right, they get to pop a balloon on another team.  After they have been eliminated, a team can still seek revenge by popping balloons.

I printed off the balloon PowerPoint from @MissCalcul8 to put into sheet protectors, but then I had another idea.  I got ACTUAL balloons from the science teacher. (Note to self: replace science teacher's balloons)

Since I had 7 teams and only 4 balloons for each team, I was worried that they would run out of balloons WAY too quickly.  In theory, the whole game could be over in 4 turns!  So I added a wrinkle.

When a team got a question right, they could pop a balloon on an opposing team, or they could steal one!  This immediately started teams forming alliances and talking strategy.  Things got VERY heated, but because there was so much at stake, everyone seemed to be engaged, arguing their points with their group mates so they would get the chance to pop or steal.  The students became VERY attached to their balloons, decorating them and begging other teams not to take them.  Others got joy out of popping the "friends" of other teams.

Warning:
Using actual balloons for this review is NOT for the faint of heart.  The kids were rowdy and loud and bouncing around the room.  They were yelling at each other and at me.  It would be VERY easy for this review to get out of hand.

With that said, this was great!  They were rowdy, but on task and even kids who are normally disengaged were heavily involved in strategy, problem solving and balloon hoarding.

At the end, everyone got "vegetables" according to how many balloons they had left:
# of pieces of "vegetables" = # of balloons + 1

The majority of the students entered the room and refused to even attempt the warm-up.  Two students "attempted" it, but their answers made it clear that they thought I wasn't going to check their work.

In previous years, students got a grade every day for putting an honest attempt into the warm-up.  I think I may have to go back to that when my 10 new students enter the room.  I can handle a student or two blowing off the warm-up on occasion, but not an entire class.

I'm sorry to say that my frustration and anger got the best of me.  I assigned them two practice sheets to work on individually and silently.  Since I NEVER do this, they realized pretty quickly that they had done something wrong and worked very hard.

When they finished, and asked "what do we do now?"  I had them continue working on their Thanksgiving Day projects.  Most of them had finished with the recipes and were ready to start scaling up.  As they worked, I told them that I appreciated them working hard and I handed out iPads.

When they started looking up food prices, they realized that things like vegetables and turkey aren't advertised on walmart.com and they might actually have to go to the store to find some prices.  Judging by the motivation of many of these students, I fear that this is where the bottleneck will occur.  I'm going to have my colleagues and the students bring in circulars from the supermarkets so we can use those as well.

As usual, something I should have planned BEFORE now.

I hate that I have to punish them to get them to do what I need them to.  To be clear, the work wasn't the punishment.  The punishment was being forced to do it on their own instead of with a partner or group.  I do my very best not to assign work as punishment.

I am constantly amazed at the different dynamics of different classes.  I know that every kid is different with their own strengths and weaknesses, but I think there are still some generalizations that can be made about different classes.  For instance, my geometry students are, in general, more academically motivated.  For reasons on which I won't speculate, they see good grades as almost more important than anything else.  As a result, they move quicker through the curriculum and are now "advanced."

The math 8 students, in general, are not as academically motivated.  Their interests lie elsewhere and, as a result, school falls by the wayside.  This isn't a judgement of their priorities, simply what I have observed.  This leads to less of a grasp of complex mathematics.  I try to show them what amazing things are out there, and keep hoping that my enthusiasm will sweep them up, but so far...

Even the differences between classes on the same level are stark.  The afternoon math 8 class dove right into the warm-up and, while they had difficulty with it, they worked well.  I wonder if the work ethic in the two classes would reverse if I had them at reverse times.

There are just too many factors involved in the academic motivation of students to be able to boil it down to a few simple things.
I will keep trying and continue to figure out how to get them to complete tasks without my pulling teeth.

I need to find or develop a task that is essentially "Show me that you know this material, however you can and want!"
Email ThisBlogThis!Share to TwitterShare to FacebookShare to Pinterest