Posted by Justin at 7:07 PM
Steve Kajari is a 3rd year teacher in Austin, Texas, who has the privilege of teaching high school algebra and geometry.  A few days ago, he posted on Twitter about a lesson in which his students made paper airplanes.  It looked amazing, but when I asked him to blog about it, he admitted that he didn't have one!

So I offered to post his write-up on this blog as a guest post and, thankfully, he agreed!  He needs tons of peer pressure to get him to start his own blog and share more of his amazing lessons like this one!


You don't challenge kids unless you challenge yourself. Every week I have the goal of engaging students with kinesthetic activities to create / explore the curriculum in Algebra but I’m not always sure how to do it in a novel and honest way. CBRs? Have already done that this year.. what else could I do this week? Then a suggestion from a student during a prior class rang in my ears -- "Mr. K, you should totally let us build paper airplanes and launch them off the top of the balcony. Then we would learn about starting point (which is what I called "Y Intercept" when I promised them they would explore it during the next class). After a day of thinking, I was convinced that this student was right. They WOULD learn about Y Intercept and it didn't matter that the idea wasn't mine. In fact, it was better that I didn't own the idea.

But how to implement it? Even worse, what would it look like? Kids in the school courtyard (behaving like 9th graders do), throwing paper planes around. Does it even look like learning is taking place? Does it match the curriculum and standards for a subject that is currently evaluated with an EOC / STAAR state standardized test? IS learning taking place and how will you know? What constitutes failure? Where do problem solving / exploration meet the rigor of applied math that our state standards (TEKS) demand?
Luckily I have an administration that appreciate that the standard model in math has been (for too long) constrained by the boundaries of the textbook and the format of formula driven learning. We're told that kids connect memory to emotion and that kinesthetic activities are GOOD, but after being told this in a professional development, the expectation is often the opposite (break out the worksheets!)  For me this year is one of the first to not fall victim to the above paradigm as I've had great freedom, support and encouragement from my PLC and admin regarding engaging kids on their level with relevant, challenging "in the moment" experiences that spotlight what the curriculum is aiming for -- which leads me to a nice lesson plan (or lack of one) that encourages kids to define for themselves what a Y intercept REALLY is.

1) Kids enter the classroom and an overhead announces to them that their bellringer / warmup is to build a streamlined paper airplane with the available sheet  of construction paper, which they  will then fly in the courtyard (not off the balcony!) and time as an experiment in what "Y Intercept" really means. The kids have a piece of construction paper and a sheet of graph paper to pick up on their way into the room.

2) The second part of the bellringer announces that while both students can work on the design,  one student MUST make sure that their team has a timer / stopwatch on their smartphones. Our kids use their electronics too much, my challenge is showing them HOW to use their electronic devices properly as adults.

2.5) It occurred to me, at this awkward moment in the exercise, that some kids did NOT know how to build a paper airplane. Really? You're giving kids the chance to launch a paper plane across the 'classroom' *for credit* for the first time in their lives, and their response is "I don't know how?" Again, this addresses how google is such a great resource and SHOULD be used by them as a starting point and reference in generating solutions. REFERENCE, not crutch.

3) On the next overhead there is a quadrant for graphing. There is no scaling and no information. Some questions are addressed. "You're building an awesome paper plane that's better than almost any other plane ever built. How far is it going to fly? How long should it take?" The overhead poses the question "Does Distance Depend on Time, or Does Time Depend on Distance?" which might be a particular quirk of mine, but  I find most of the struggle in teaching domain / range and independent / dependent, or even in generating a graph comes down to "where to put what" and "what does which one mean"? Consequently I don’t let students do anything until we all agree what to label where. When students incorrectly (and they will) say that time is dependent on distance, you can point out to them that time DOES NOT slow down or speed up depending on how far they throw their paper airplane.  So much for sorting dependent vs. independent! Done! My class is very familiar by now with knowing that the X, or input variable, is put along the bottom of a graph. The conversation at this point should then transition to scaling, and should be up to them. How far will their planes fly? How long will they be in the air? After a while, if students have to repeatedly estimate domain and range, they begin developing some reasonable guesses. Once the class decides and we know how to label our graph, we fold the graph paper in two "hamburger" style. The class is told to replicate our graph design on the top and bottom of the paper since we will be doing 2 trials.

Part 1
Almost all of my classes revolve around my concept of "the Do". If you're writing or told something, you're not learning. If you're DOING something, then there's a connection being made. Journey to some place where you have ample physical space -- student paper planes can fly around 35', believe it or not! Have your students line up behind a line of masking tape or other starting point. Stretch out a tape measure on the ground (thank you Dollar General!) in front of them. Have their teammate, timer at the ready, stand to the side. Ready, Set, Go! Record the data as a discrete point. OK, now time to have a discussion.

The open ended back and forth between students at this point is critical; you shouldn't do anything other than prompt or guide. Students should discover that their paper plane went somewhere over time and HAD TO GO THROUGH ALL THE INTERMEDIARY DISTANCES to get there. Extend the conversations, explain the difference between discrete and continuous, domain and range, dependent and independent, or *don't*. DO let the kids enjoy the activity. DO ask the students to predict how long it would take for their plane to go another 10 feet further than what it did – most will readily glance at the line they’ve created and have no problem answering you based on their data. And almost 100% of them will correctly identify the Y Intercept as (0, 0) or at least as “Time is 0 and distance is 0 when we start.”

Part 2
Have them come OUT to about the 30' mark on the tape measure, reverse the positions of the stopwatch / timers, and have them throw the paper planes BACK towards where they originally started from. If you're still paying attention, you'll realize that their starting point is NOW about 30 feet INTO the graph, and that their distance will be decreasing, NOT increasing. *All* important stuff for kids to deduce when it comes to this topic. It was easy for us as we set the exercise up as “Distance Plane Went Into the Courtyard” so they already kinda knew that trial 2 was going to show less distance than trial 1 did.  They recorded the ordered pair of stopwatch time and location along the tape measure on the graph. AND about 90% of them immediately connected this to a Y Intercept of (0,30) on their graph without being told.

THE CONCLUSION
As my classes are 90 minutes long (and the above is just a discovery meant to “activate” / turn the kids’ brains on), the transition to a good, quality activity and discussion after this is crucial. My kids did the lesson “iCost” on www.Mathalicious .com which allowed me to ask ALL of the same questions we had explored in the discovery activity. This time, however, it was as part of application rather than discovery. The iCost activity gives students 2 ordered pairs to graph – iPad cost and iPad hard drive size. They’re asked to plot the cost of the 16GB iPad and the 32GB iPad, and then to predict what a 64GB iPad would cost (I say ‘would’ because there’s no such thing! Nice trick to eliminate google cheaters). Best aspect of iCost is that, as students trace their line back to an iPad that has 0 GB, they are confronted with the confusing fact that the unit STILL supposedly costs around $400. Out of about 70 students that I “prepped” for the iCost lesson with the paper airplane exercise, almost every one down to the very last student had no problem quickly stating that the $400 was the starting point! They didn’t think it was fair to have to pay for the plastic, the aluminum, the glass and the electronics that the iPad was made out of, but they DID understand that some Algebra problems start from the origin and SOME have a starting point that might be quite different. Kudos…. Great job kids! 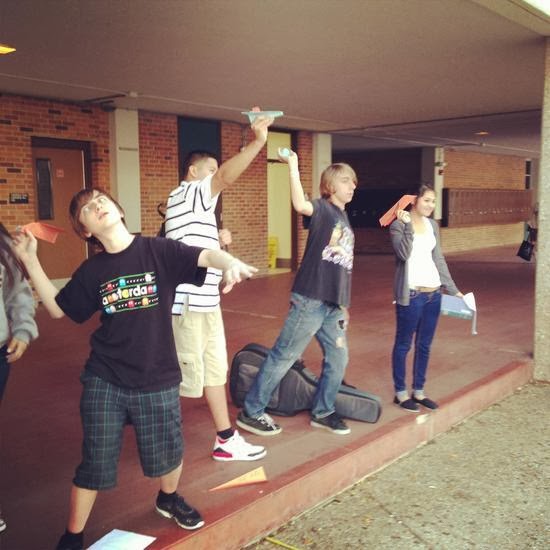 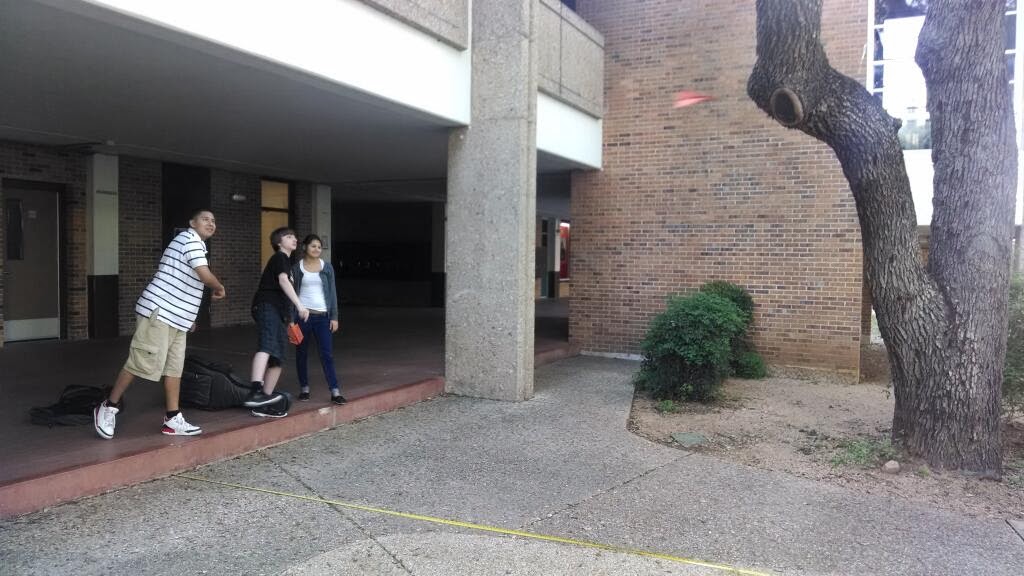