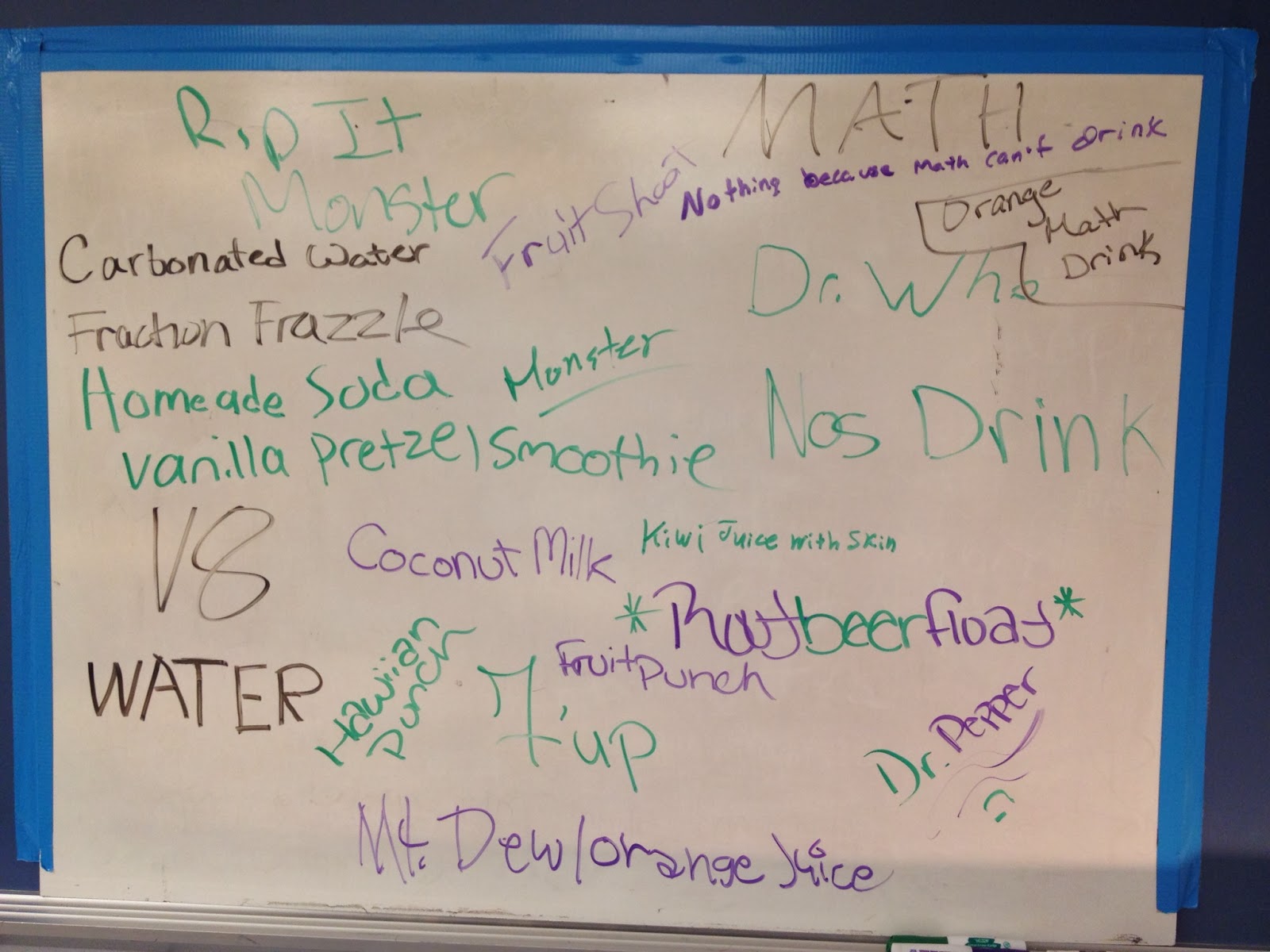 I am at war with myself.

On one hand, my geometry class seems willing to go with me no matter where I lead them.  They will try any insane project and have absurd discussions with me about dark matter and gravity and what it would be like if the moon disappeared and how to build an electromagnet.  They fight with each other to ask better questions that lead us into more interesting depths.  I don't check homework, but they do it anyway.  They are curious.

On the other, the majority of students in my pre-algebra classes fight me every step of the way.  I try to find out what interests them and they put their heads down.  They don't do homework whether or not I check it.  They don't care about grades any further than "am I passing?"

We Skyped with Mrs. Neil's classes in Florida today and I was embarrassed by the way my students behaved.  I had hoped that it was simply the mix of students in my first class coupled with the fact that half of them are new to my room.  The second class, however, acted about the same.  For the most part, the majority of the students behaved very well.  A few, however, made it very clear that they were not ready to participate in such activities and, as a result, will be excluded from them next time.

It is a struggle for me not to be angry with them.  A part of me recognizes that they are teenagers and giving them new experiences is something for them to be excited about.  That same part also recognizes that our current educational system doesn't prepare them to behave in an appropriate fashion.  It rewards those who blindly follow at all times and those who don't are punished.  There is very little explanation of when they SHOULD simply do as they are told and when they should express themselves.

I spoke to them beforehand about my expectations, that if they shouted out no one would be able to hear anyone else.  I told them that the one mic was very sensitive and all background noise would be picked up and transmitted.

They carried on as though were on a playground.  I feel as though I spent half of the conversation telling them to be quiet so we could hear what was being said on the other end.  Mrs. Neil's students were sitting in their desks, politely listening while mine screamed at each other and at them.  I had to relocated several students because they were simply incapable of being quiet.

After the call, when we attempted to get back to our regular classroom, the students refused to get back on task.  After trying for 15 minutes to finish a single problem, I decided that I was simply done.

My 4/5 class received a 20 minute lecture about how school is boring because they make it so.  I explained how it feels to be a teacher who wants his students to be interested and engaged, so he spend time developing lessons and connections to help them express themselves and experience things that they wouldn't otherwise experience only to have those same students treat those efforts with a nauseating level of disrespect.

I took, and take, much of the blame on myself.  My early success made me cocky about my abilities to engage the group.  The level of rapport that I had built with them caused me to think that they would simply do what I asked, trusting that I was trying my best to make it interesting for them.

As positive as I have been this year, those thoughts are starting to crawl back in.  My coworkers have seen remarkable changes in me this year.  Several of them have asked me what happened over the summer to completely turn my attitude around.  Many of them don't even recognize me anymore.  I had thought that with all of the changes I had made, this year would be different.

In many respects, it is.  My geometry class is doing remarkable things, but I don't know how much of that is actually me.  Most of those students have VERY supportive and involved parents who would be pushing them anyway.

The pre-algebra classes, however, are the same as last year.  I firmly believe that there are students who need help and an educational environment that I simply cannot provide with 25 other students in my class.  They will be able to excel in a place where they can receive more attention than I am able to give them.  I know that lots of teachers say things like "God, I wish I could get that kid out of here!" but that isn't what I'm saying.  These are bright and capable kids, but they are not in the environment that best serves their needs.  I would happily help them, but I don't know how.

It wrenches my heart to think about the amount of time and attention that has to be put towards those students when I have so many others who need me as well.  I don't feel as though I am serving my students well.

I don't know how to reach them.


Or maybe it has just been a bad week and things will be better next week.

This is a confusing job.


I left myself a note to find on Monday. 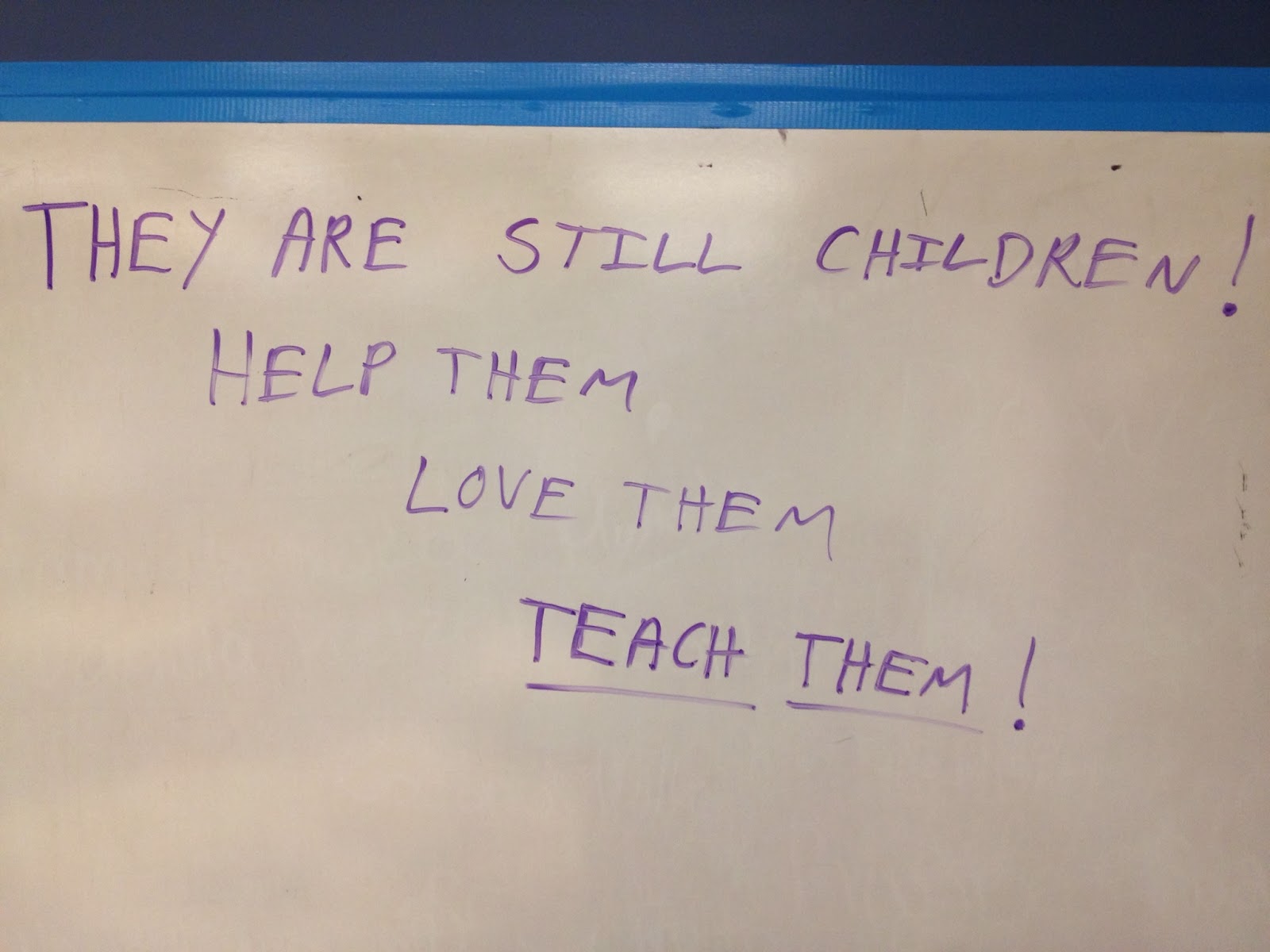