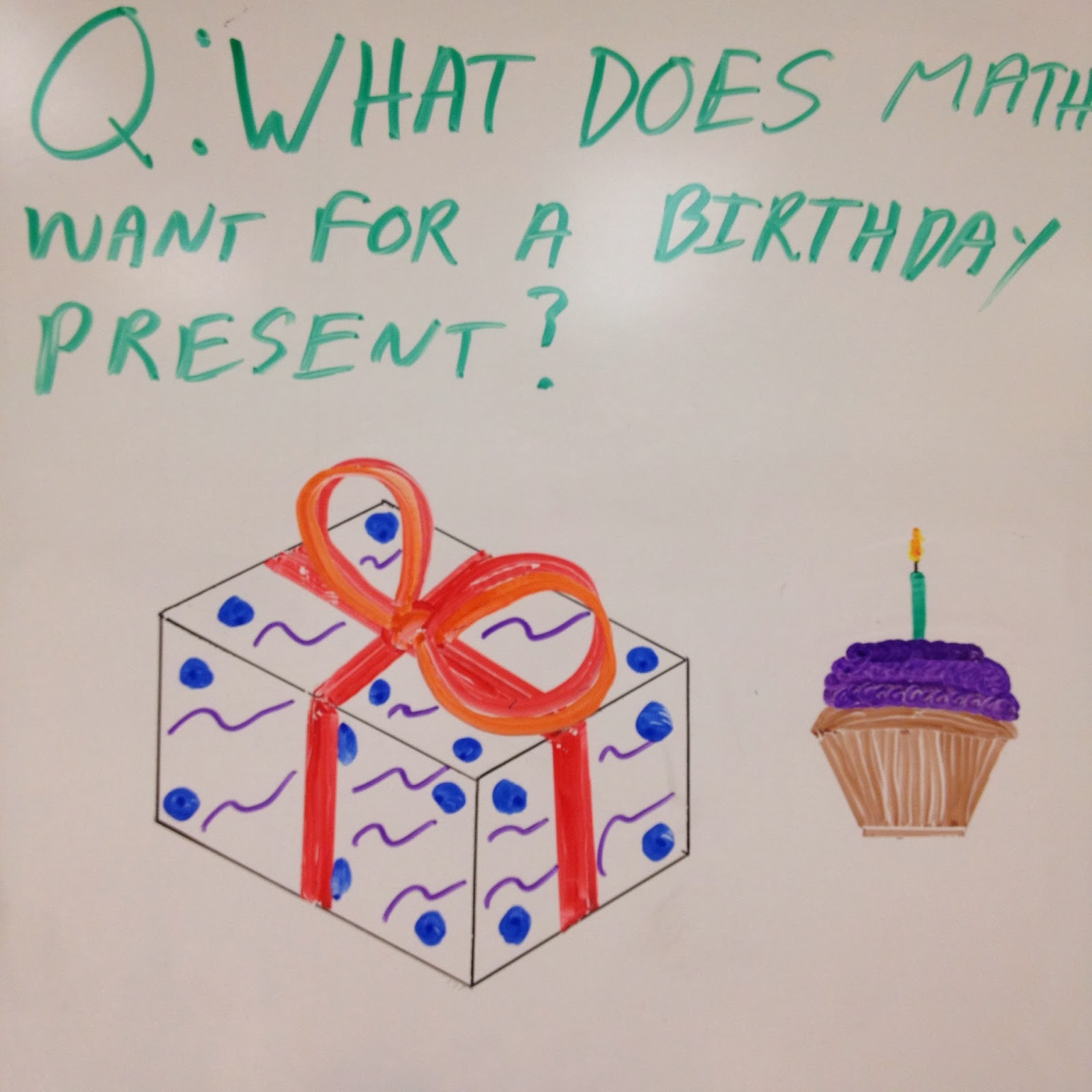 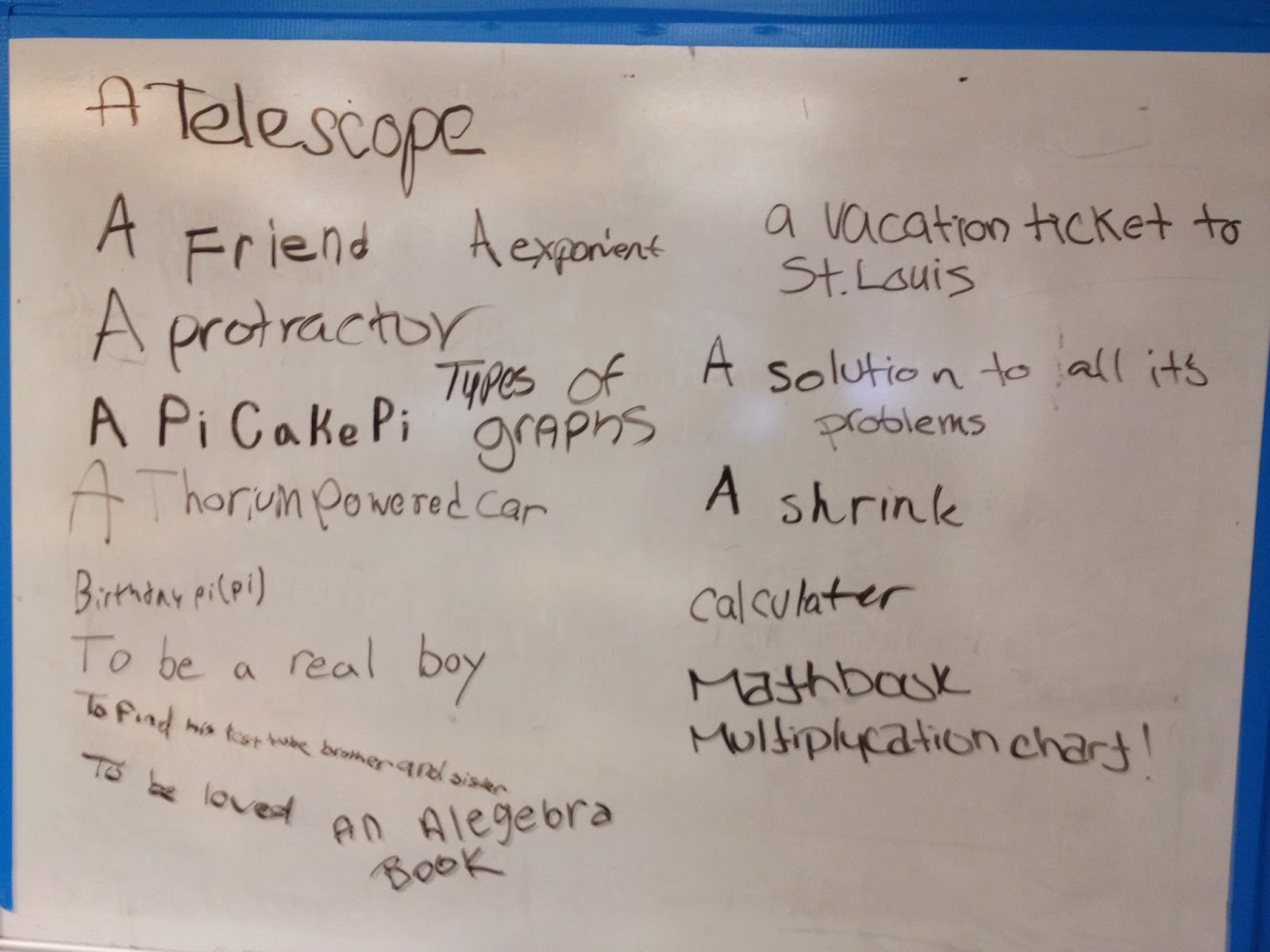 First thing this morning, a teacher friend linked me to an article about a teacher in Mexico who gave freedom to his students and helped them to accomplish amazing things.  It started me down a path of thought that branched off in odd directions.  Thinking also about the Passion Project that the amazing @leslie_su76 was kind enough to share with me, and by the time I got to school, I was speeding so that I could get inside and start changing my entire pre-algebra class.

Research has shown that students learn better when they are interested in the topic.  In previous years, I didn't care if they were interested and instead focused on the idea of "you have to learn this if you like it or not."  This year, I've been trying to make the required material interesting.  In geometry, I think I've been succeeding.  In pre-algebra, I know that I have not.

At the start of the year, I started looking into the idea of Standards Based Grading.  Yesterday, I talked about allowing students to create presentations of their knowledge however they can.  I spoke with several teachers from several subjects about how to design these assignments and got some amazing ideas.

Overnight and from the article this morning, I realized that I have an amazing opportunity.  Today, I received 11 new students in my 4th period class.  One of those students speaks minimal English.  I had originally thoughts about starting the new integrated class with a recap of the rules and expectations in my room followed by a lecture and/or silent individual work.  I suppose my thought was that with new students coming in, I needed to reassert my dominance over my classroom.

Even typing that now seems a little absurd in light of my complete attitude change this year.

Instead, I allowed my thoughts to run wild and by the time students got to school, I was excited, exhausted and terrified.  I asked my principal if I could do an experiment in my class for the next few weeks.  I used phrases like "pilot project" and "authentic experience" and "technology integration."

So what am I doing?

I'm letting my students decide what they want to learn.

Really?? All of human knowledge at your fingertips and you want to learn about integers? That MAY be true, but I don't believe you.

I explained my idea and also some of the major issues.  I explained that we were going to pilot this type of learning for the district and if we messed it up (because it wouldn't be they, or I, but definitely "we") than the district would be able to say that exploratory learning was a failure and we should only work on text books and worksheets forever.  If, however, we succeeded in doing something amazing, we may just be able to change how students in the district are educated.  I MAY have exaggerated a bit, but they got the point and understood the importance of the experiment.

I made a deal with them: If they found something they could be passionate about researching, and would research it passionately, I would find the math in it in a way that was real and interesting.

I then handed out a class set of iPads and let them loose! Their goal for today was to explore the iPad and the internet, looking for things they found interesting and would like to learn more about.  By the end of class, they were to come up with at least 4 topics that they might want to explore further.

Then I stepped back and let panic set in, mostly my own.  How could I just give up control of my classroom like this??  What happens if they don't learn anything??

I think 4th period (now with 2X the kids!) thought it was a trick.  Several of them tried to upset me by looking up videos about football, or music videos with Beyonce,  I turned it around on them.

Me: "What are you looking up?"
Student: "Watching football."
M: "Cool! What about football do you find interesting?"
S: "The players are cool."
M: "Nice.  What about that guy? He any good?"
S: "He's alright. He's not as good as Hines Ward though."
M: "Really? What makes someone a good football player?"
S: "...His stats?"
M: "Interesting.  Would that kid over there say that this guy was better than Hines Ward?  Is there a way that you could say for sure who was the best, even if they played different positions?"

As I wandered the room, actually shaking from nerves, I saw an interesting mix of reactions.  Several students were exploring the iPads, opening apps and testing things out.  A few played Wuzzit Trouble, and a few other math game apps.  I even sent a few to Math Munch.  In 8th period, several students laid down on the floor and began browsing the internet.  I walked around the room and sporadically asked "What are you reading?"

She was reading about blobfish.  Another student was looking up zoology and kept spouting off facts from the net.  Another was researching how to become a lawyer.  A few students were using iMovie to make some videos and I heard "That's awesome! How did you do that?"  Learning was happening.

There was not 100% engagement, but there was more than my typical lessons.  I have very high hopes for this, but I am scared out of my mind.


After talking with our literacy coach, I felt MUCH better.  She sent me some resources and we talked about how to focus the students.

I do wish that I had taken more time to plan this before jumping in with both feet, but I also know myself.  I know that if I didn't start this right away, I would ponder over it for weeks and it wouldn't get done.  That has happened with other amazing ideas that I had in the past.


It's an evolving idea, but it scares the crap out of me.

I've either done something amazing, or ended my teaching career...
Email ThisBlogThis!Share to TwitterShare to FacebookShare to Pinterest