Posted by Justin at 3:58 PM
At 1 am, I was awakened by the buzz of my phone.  In anticipation of a delay, I was immediately alert, but it was nothing more than a notification from Twitter.

At 3:30 am, I was awakened again, this time by the sound of the wind blowing rain and, what I can only assume was small animals and rocks, against the side of my house.

"That sounds awful! Surely, they will call a delay with weather like this!" But alas, it was not to be.

At 4:36, my alarm went off and I began a morning routine that I have not done in 16 days.  I gathered clothes in the dark, quietly as to not wake my wife, started a pot of coffee and went to shower.  After coffee and breakfast, I checked closures and delays again to find nothing, except that the entire state of Minnesota was closed.  The phrase used all over my internet alerts was "Arctic Blast!!"

I bit the bullet, got in my car and began my drive to work, thinking about my plans for the day as well as the drawing and question that I was going to put on my back board.

No sooner had I entered the highway than my phone rang, notifying me of a 2-hour delay!  We have a district policy, however, that all teachers must be at school at the regular time, so I continued my commute, albeit slower and more careful.

Halfway to school, I watched an SUV with more weight and better tires than my little car completely spin out for no apparent reason.  Luckily, everyone was far enough away that we were able to avoid him with renewed caution.

Within 30 seconds of witnessing this, I lost control of my car and watched in slow motion as I went slowly, but inevitably, towards the ONLY telephone pole in a 100 foot radius.  Luckily, my tires got traction as the last minute as I managed to just scrape the front of my car on the curb.

With that trial completed, I made it the rest of the way to school without incident.  I then sat in my classroom for over an hour, doing menial tasks to keep busy while the network, and therefore all of the computers and printers, were down. 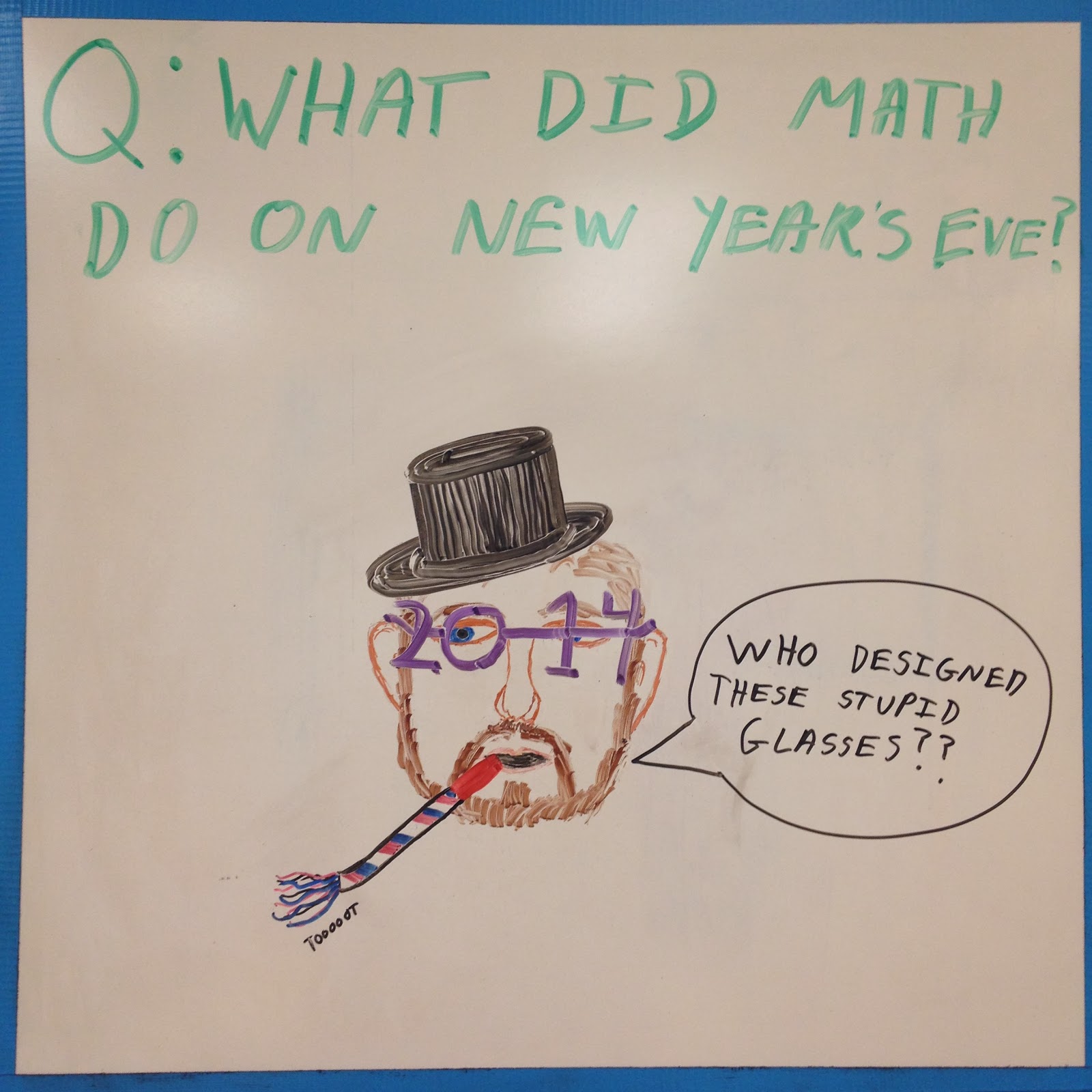 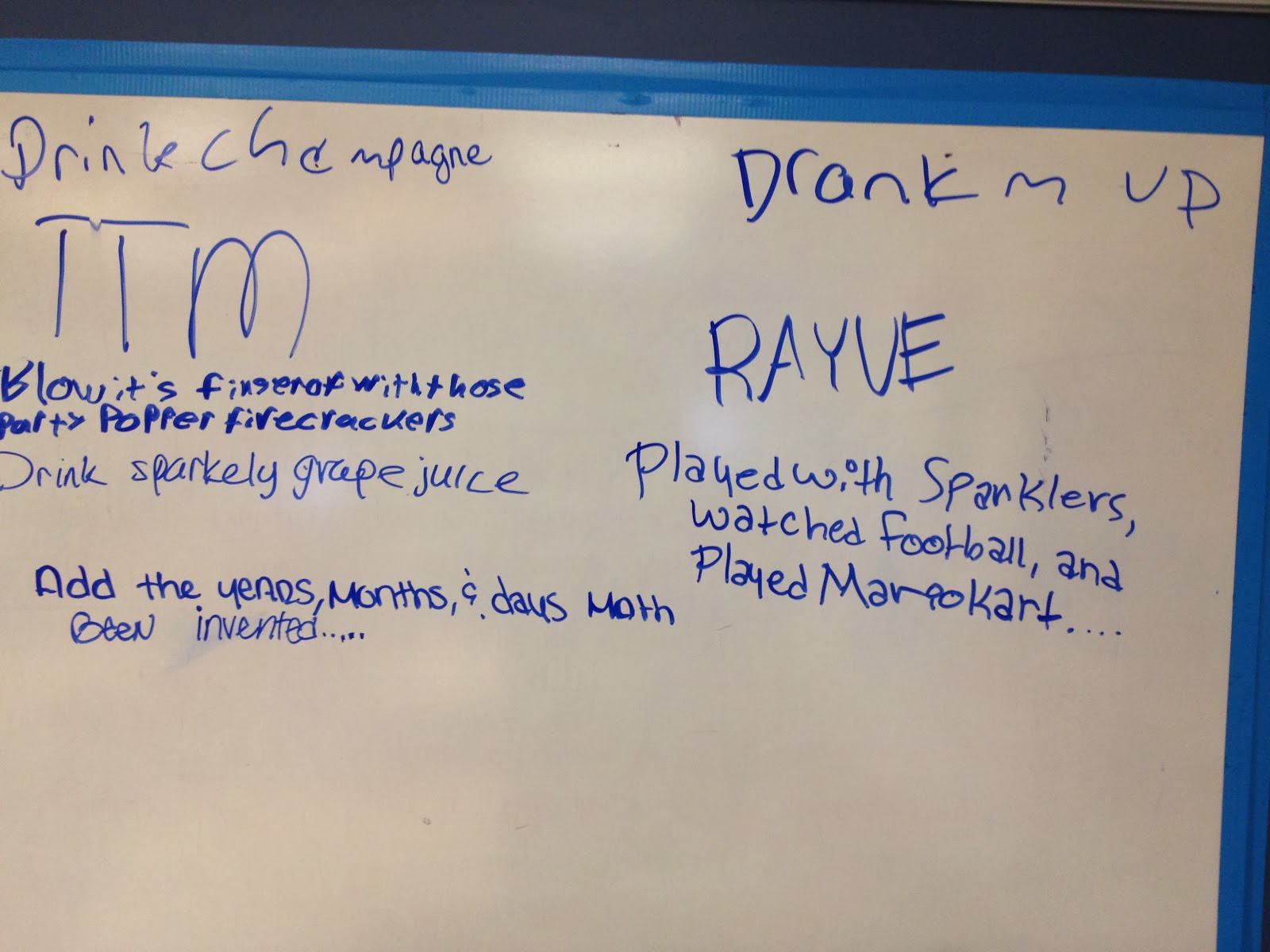 Over break, I saw a great triangle problem posted on the interwebs over at Go Geometry.

Rather than have my geometry students grind through a list of mindless crap, I assigned this one problem for them to work on in groups for the whole period.  None of them completed it, which is great, but they all worked hard, which is better.

I wanted to ease all of my classes back into the routines of school without overloading their minds.

The plan for pre-algebra was to have them develop their own Chapter Review Test/Packet.  I gave them blank sheets and asked them, as a group, to find one easy, one medium and one hard problem from each section.  They were then to work through each problem and produce a good example of each.

Chapter Test Review Creation
The results were disappointing.  One group picked three easy problems for the first section (square roots.)  When I explained to them that their medium and hard questions were too easy if they could do them in their heads, and they would benefit from picking more challenging problems, they quit the activity entirely rather than redo 2 problems.  I tried talking with them to get them back to work, but they completely checked out and looked through me as though I wasn't there.

I will try again with them tomorrow.

My 4th period has 28 kids who need constant attention to remain on task.  They are very bright, but their persistence needs a ton of work, so if I'm not standing over them, they have difficulty completing tasks.  They are, for the most part, what I would classify as "passive learners."

My 8th period, with a few minor exceptions, did MUCH better with the activity.  We started with 6 groups and 5 actually working.  After about 20 minutes, it became 5 groups with 4 actually working.  I circulated through, encouraging and helping when needed.  Most of the groups divided the work and each worked on a different section.

I like this kind of activity because it isn't just mindless calculation of practice problems.  It requires students to actively evaluate the complexity and difficulty of problems, selected ones of varying levels.  In the 8th period, it seemed to sink in that I was going to make the test based on what questions they chose.  Knowing that another group may pick something more complex drove certain students to work harder, hoping not to be tricked on test day.

I think I will do this more often for test and quiz review.

Also, one of my students couldn't wait to show me his socks today! 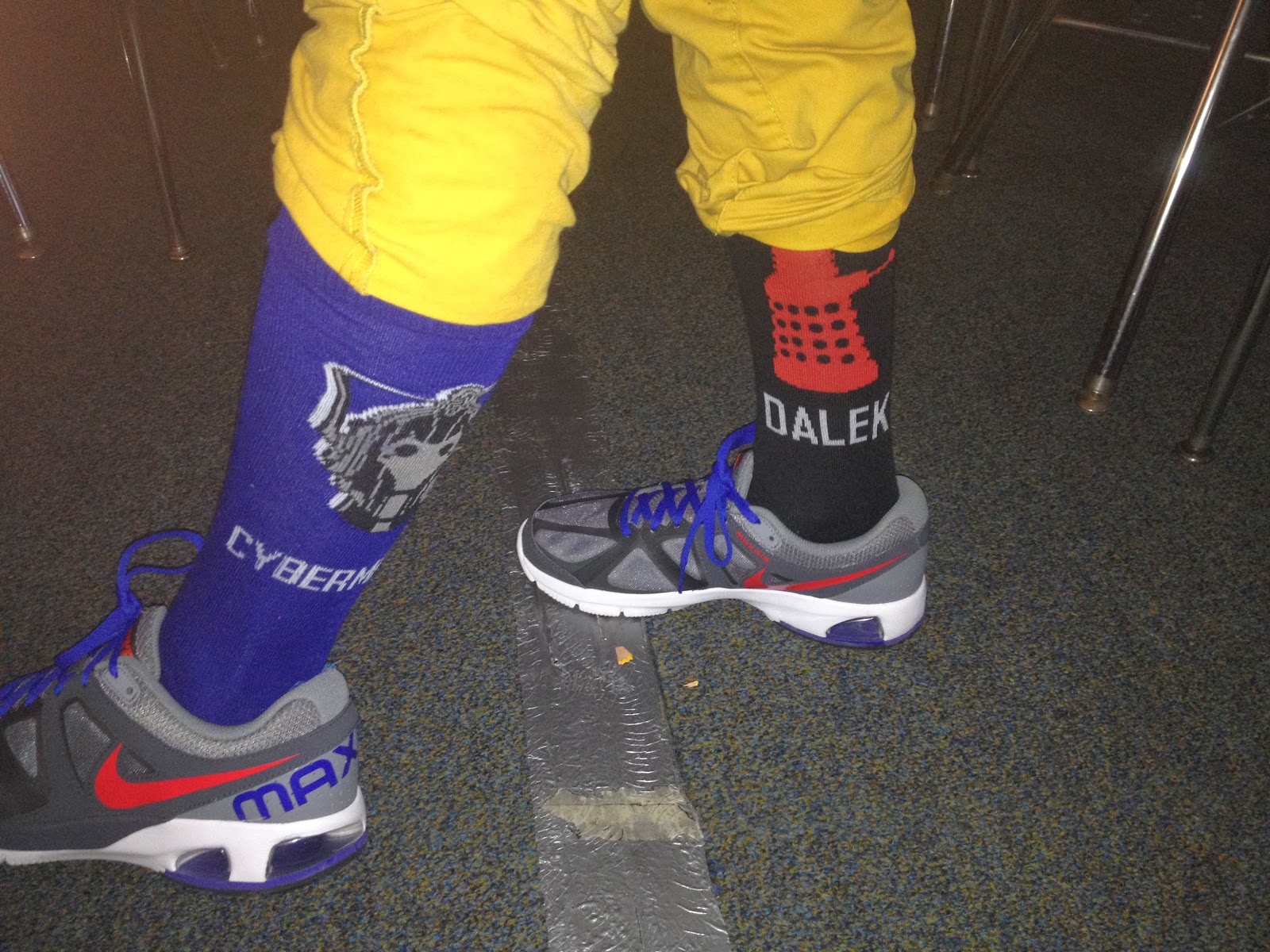 On another note, school has been cancelled for tomorrow and we have a 2-hour delay on Wednesday.
Email ThisBlogThis!Share to TwitterShare to FacebookShare to Pinterest