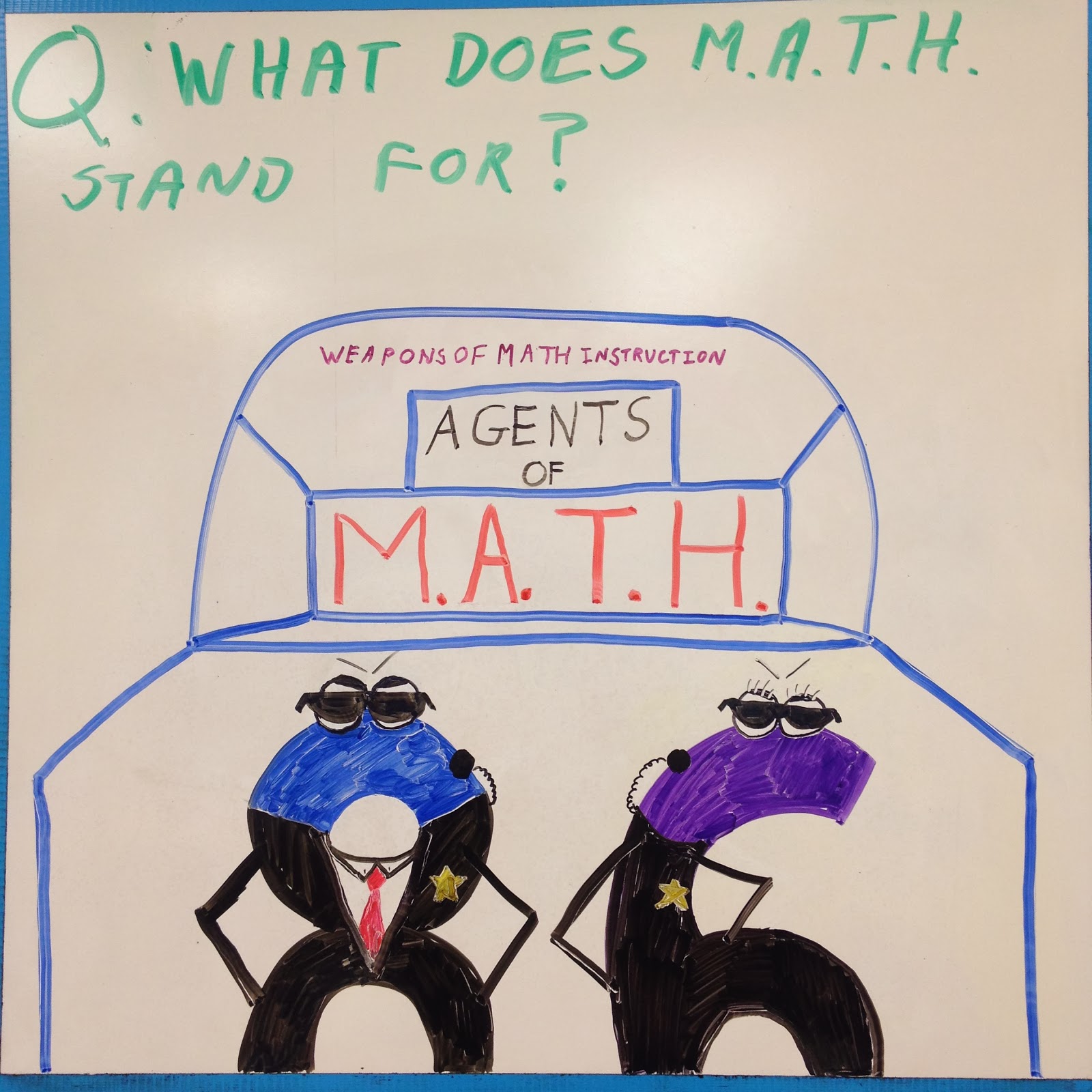 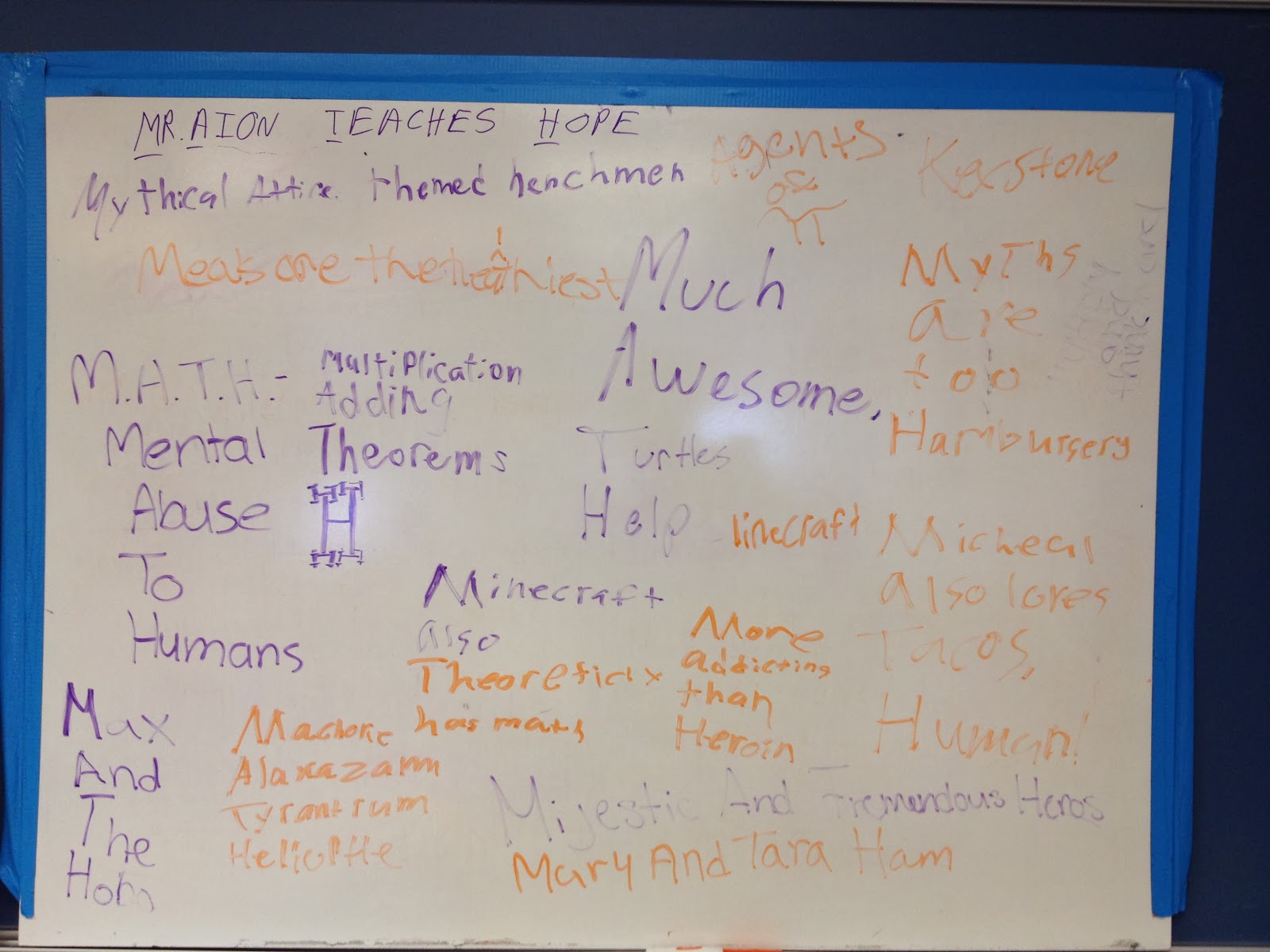 I started a new type of assessment after thinking heavily about what I value and my goals for the class.  Two weeks ago, I gave my geometry students, several open ended questions from the text book to work on in groups with the following instructions:

You are to solve these problems, but you are also going to be writing a solution guide.  This means that you answers and explanations should be clear to anyone who picks them up, regardless of the mathematical background.  You should not need to be present for your explanations to be clear.

They were confused, but they worked very hard.  When they turned them in, I wrote feedback, gave them a score, made suggestions for improvements and handed them back.  The class average was about a 60%.

"If you are not pleased with your scores, take a look at the comments and suggestions I have left.  You can make improvements and clarifications and turn them back in.  I will replace the old score with the new one."

While one group argued over whose fault it was that their score was so terrible, the rest of the class took my suggestions to heart and turned in honest efforts.  I am so proud of them for this.

Last week, I did the same for the next chapter, but this time, they were to hand in their work individually.  They could collaborate, but each person needed to do their own.  They were due on Monday.

Two students turned them in on time.  When I asked a few others about it, their reply was "I didn't think it was good enough to turn in yet. I'm still working on it."

I LOVE this! We can work on promptness and deadlines later.  Right now, I'm going to dive into their pride and swim around in it, Scrooge McDuck-style.

Today in class, I announced who had turned in the latest assignment.  Those who had not were to work on it. Those who had could either revise their previous assignments or continue working in the guided notes.

While they were working, I called students up one at a time to go over their assessments.  I read what they wrote out loud to them and asked clarifying questions.  Then we talked for a bit about the concepts and how they could have more effectively communicated their knowledge.

Then I asked what they felt they deserved on each question.

Almost every kid low-balled themselves.  On a problem that I thought should have earned a 9/10, they felt they earned a 4/10.  I don't think it was false humility.  I think (and fear) that they have been trained over years and years to not adequately evaluate their own work.

How often have they (has anyone) turned in a school assignment that they thought was awesome, only to get back a terrible grade with no feedback?  I'm trying to put a stop to this.

In addition to helping the students better explain their thinking and communicate their reasoning, I loved that I was able to spend some time just talking with each student.  I used it as a chance to check in with them as well about how they felt the class was going.  I didn't get through all of them, and many took their papers back with them to make revisions based on our conversations.

I wish I didn't have 31 kids in this class so that I could do these conferences more often.  Perhaps more independent work is the answer? Once they have a clearer view of my expectations, I have faith that they will exceed them with flying colors.

As class ended, one student held back.

He told me that he had applied to a private school in the area and had been rejected.  His admissions scores were good, but apparently not good enough.  He was incredibly disappointed and wanted to know why he didn't get in.  I told him he would have to ask them, but gave him some advice on how to do so.

Me: "When you guys ask me about your grades, what's the only questions I want you to ask?"
Student: "What can I do to improve?"
Me: "Exactly. Ask them the same thing.  Don't ask them why you didn't get in. Ask them what you could do to improve your chance of acceptance the next time."

He thanked me and, after we talked a little more, I walked him to class.  This is a kid who has seemed a little off in the last few days and when I asked him about it privately, he said it was nothing.  I told him that if he wanted to talk, I was there for him.

I am so proud that he took me up on it, even if it took him a few days to do so.  I need a reminder every once in a while that I'm getting through to my students, not just on an academic level, but on a personal level.

I truly believe that teaching is not about content.  It's about relationships.


One of my students started to ask me a content question yesterday and quickly stopped.
"I hate how you never answer questions except with more questions.  But I read your blog and I know why you do it."

I have mixed feelings about students reading my blog, but on balance, I like it.  I have always written here as though they (or their parents, or my administrators, or potential administrators) might read it but never gave it much thought.  It's interesting to hear their perspective on the difference between my classroom self and my blog self.

"On your blog, you're so professional.  Not at all like in class, where you're fun!"
Email ThisBlogThis!Share to TwitterShare to FacebookShare to Pinterest