Posted by Justin at 3:09 PM
Yesterday, one of the students in the high school put up a tweet that could be considered thoughtless and foolish at best, and malicious and evil at worst. 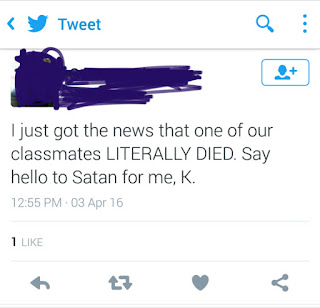 The student in question is a professed Satanist and has since stated that he meant no offense by his comment, that it was a poor choice of tone.  True or not, I do believe him.

The school went into revolt.  This student was threatened repeatedly and was confronted numerous times online yesterday and in person today.  Swift intervention of faculty, staff and administration kept it from escalating.

These incidents however, allowed me to have a conversation with one of my classes about perspective and actions.  Going off of the assumption the student in question was genuine about his beliefs, his comment could be seen as a poorly worded version of the Christian statement "he's with Jesus now."  This statement is not well-received by non-Christians because that's not their belief system.

I am in no way justifying the actions of this student.  I believe his comment was thoughtless, callous and attention seeking.

Regardless of my thoughts on this, it happened and now we are dealing with the aftermath.  I spoke to my students about the need to understand where others base themselves.

"You come around a corner and see your friend fighting someone you don't know.  You're going to join in and help your friend, right?"
"Well yeah!"
"What if your friend was the aggressor?  What if your friend started the fight and did so in a way that you can't justify?"
"...I would still help him because he's my boy."
"And if he punch the other kids little brother and stole his shoes?"
"Nah, he's on his own."
"You've already made the judgement to jump in without the knowing the story."

This was a much more involved conversation, but it seemed to me that many of the students were beginning to see that things were much more complicated than they had thought.

If a guy drives up onto the sidewalk and hits a child, he's to blame.  If the child runs out between cars and the man runs him over, the man may not be to blame.  The intent was different, but the result is the same.


After the student put up his tweet, other students immediately began calling him on it.  I asked my students what would happen if they bumped someone in the hall and that person starting screaming at them.  Almost every person in my class said they would flip out.  We talked about how, like most wild animals, teenagers get their backs up when confronted.  Even if they KNOW that they are in the wrong, it's difficult for them to back down.

Most adults can't do this either.

The fact that the tweeting student didn't offer and apology that they found acceptable was another version of this.  Even if he realized that he was in the wrong, which he did, it was very difficult to apologize with everyone attacking him.  In addition, if he felt those attacks were genuine attacks on his professed religion, it would make it even more difficult.


In the midst of grief, mourning and sadness, I'm glad that I was able to have a rational conversation with students about perspective and putting yourself in the shoes of someone else.

We teach more than content.  Sometimes, just sometimes, we get to teach empathy.

I only wish that it didn't take a tragedy for my students to be willing to listen.
Email ThisBlogThis!Share to TwitterShare to FacebookShare to Pinterest