Posted by Justin at 3:39 PM
Warning: The following post contains language not appropriate for school, or polite society.  I write the words in here as direct quotes from students.


I frequently find myself appalled and disgusted by the way some of my student talk about women, trans people and homosexuals.

A few examples that stick in my mind from the last week:


Two girls and a guy is super cool, but two guys and a girl is gay as hell.

I would never disrespect a female, but bro, this b*tch had the nastiest p***y.

I wouldn't ever be with a b*tch with small tits, I don't care how good she sucks it.


In addition to this, the boys have no problem talking about their numerous sexual escapades, real or imagined, but as soon as a female student mentions sexuality, she's immediately labeled a slut, a smut, or a thot. 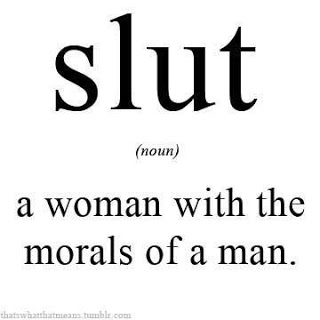 I try to address comments when they crop up, but it's exhausting and unending.  If I try to engage them in a serious conversation about this topic, I am often told "it's not that serious" and it doesn't matter since they are talking to their friends.

In many cases, addressing the issue at all earns me the response of "Man, we're not talking to you, stay over there" or "This is Astronomy. Why don't you just teach us about space and leave us alone."

Recently, I've been cutting the conversation short and telling them to not have those discussions in my classroom.  This makes me feel like a coward because instead of confronting the ignorance and bigotry, I'm pushing it off onto someone else

I feel incredibly protective of my students, especially my female students.  I want my room to be a safe space.  The few students that I've asked about this tell me that they are used to it.

This is not acceptable.

Interestingly, I noticed that very rarely do the students actually harass students who are openly gay.  They use "gay" as a derogatory term for each other, but it doesn't seem to matter to them when two boys in a relationship walk down the hall holding hands.

I've been told that the cultural reason for this is that it has nothing to do with sexuality, but rather about pretending to be someone else.  Closested students are made fun of, but openly gay students are left alone.

I'm not sure how true this is, but it does make a kind of sense and is consistent with what I know of my students.


I need to do a better job nipping this behavior in the bud right from the start of the year.  I cannot allow my students to think that such talk is acceptable.
Email ThisBlogThis!Share to TwitterShare to FacebookShare to Pinterest