Today was the first day for presentations in Astronomy.  Students were assigned to pick a famous astronomer, research their life and accomplishments and give a 5-6 minutes oral presentation with supporting slides.  They needed to have a brief 5-10 question quiz to make sure students were paying attention.

I made up a rubric and everything! 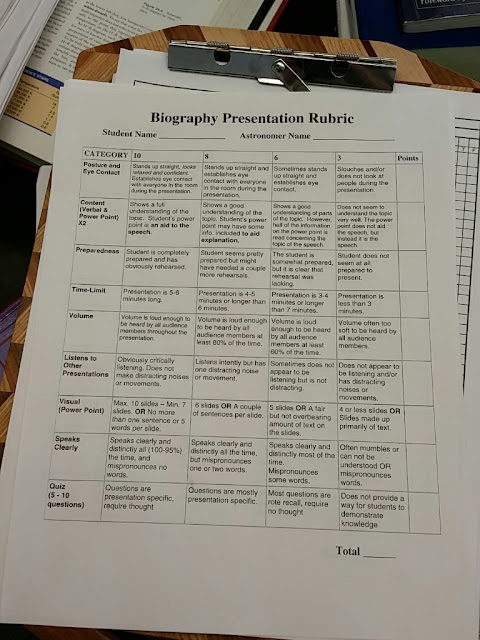 Many of my students were not ready.

Due to the delay with the testing, I only saw periods 2, 3 and 6.  When called up, here were some of the responses I received:

What is this presentation supposed to be about?
We were supposed to have a quiz?
I needed to send it to you?
Can I go to the library to finish it?

When I checked my email this morning, I had received 3 files.

Several students were making last minute changes (like adding a quiz) on their phones before sharing the files with me.

The presentations themselves left me feeling confused and frustrated.  I few of the students did a good job, but the vast majority gave presentations as though they hadn't even glanced at the rubric.  I spent an entire class period going over it, making it VERY clear what I was and was not looking for.

The presentation was supposed to be between 5 and 6 minutes.  The average for the class was around 2.  Several of the "quizzes" were questions read out of their notebook with no way to determine who was and wasn't paying attention.

I did get a few quizzes ahead of time and was able to load them into the Plickers program, which allows instant feedback.


Again, while a few demonstrated considerable time and effort, many appeared as though they were thrown together at the last minute.  Only one presentation appeared to have been rehearsed.

I'm writing all of this not as a way to complain about the students, but rather to express the depth of my frustration and concern.  A student from another period came in and watched, commenting afterwards that what she saw should have been embarrassing for a senior about to graduate.

"No college on earth would accept that level of work."

I'm spoken with my students about what they need to do in order to pass my class and, in many cases, graduate.

I'm not sure what else I can do for them.  The lack of achievement doesn't seem to come from lack of understanding, but rather lack of effort.


Last week, I attended Curriculum Night at the school to talk about my class to potential parents and students.  Several spoke to me of their concerns that it would be too hard for their child.  I feel as though I have made considerable effort to make sure than anyone CAN pass the class with a basic understanding of Astronomy with a considerable amount of depth possible for those who wish it.

I am distressed at the number of students who are not passing, or are right on the edge of not doing so.  I think that I have differentiated my instruction and my assessment to accommodate the various strengths and interests of my students.

One of the arguments that is often made against differentiation is that students will learn that the world will cater to them.  While I think that's true in a very few cases, the vast majority of students don't fall into this trap.