Posted by Justin at 3:17 PM
I can't figure out how this week is STILL going!  Why isn't it May yet?

We continued our work on H-R Diagrams today.  I gave out a worksheet to be completed by the end of class.  Those who worked well managed to finish.  Those who didn't, didn't.

While I was watching my 3rd period work, there were a few boys who opted out and, instead, decided to play with my constant velocity cars from physics.

At first, I was annoyed by their off-task behavior.

As I watched them, however, I realized that they were actually designing experiments and ranking the cars.

They started by racing them to see which was the fastest.  Then, they started them at different positions and times to see if they could get them to stop at the same place.

They put the cars head to head and had them climb an inclined plane to see which had the most power.

They were systematic and creative.  The asked questions that were interesting to themselves and developed ways to solve them.

They didn't use formal reporting methods and their error analysis was ...sketchy.

"Dude! Your pencil was in the way!" 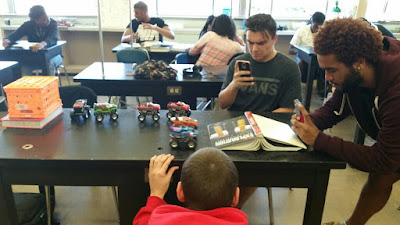 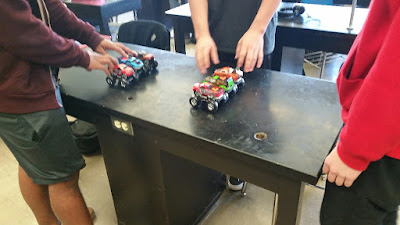 In 6th period, a few students completed the assignment I gave and then attempted to make a bridge of paper that the cars could cross.  They stapled pieces of paper together and used weights to keep it from slipping off of the desk.

Once they made a bridge that held the car, they discovered that there wasn't enough friction for the car to make it over the edge of the far side.  They fiddled with various heights of each side and adding weight to decrease the slack in the bridge. 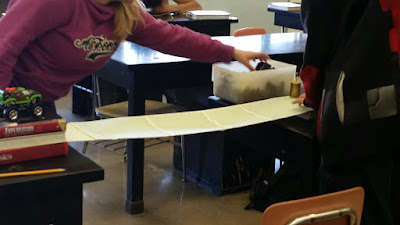 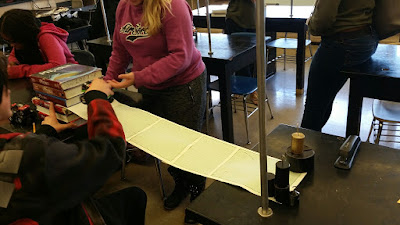 They also had no formal methodology.  They recorded no data and wrote no conclusions.


So what??  THIS is what we want, isn't it?  Don't we WANT students to be critically thinking, creating and solving problems, and developing methods of analysis?

The more I think about it, the more I'm convinced that had I asked them to do just this, they wouldn't have.  In addition to that, however I would word my assignment would have sent them in a specific direction instead encouraging exploration.

I had a fantasy of a completely unstructured school with rooms full of random toys and objects.  Students would create their own learning based entirely on their interests.  Teachers would be there to help assist when it was needed.  This would be an amazing place, but it's not a school.

In addition, I'm not sure that it should be.  Once again, I'm back to asking myself why we send kids to school and, once we figure that out, what I'm supposed to do with that information.


I watched my students experiment wondering how I could help them to formalize their explorations.

Then I wondered why I should do that.  The easiest way to ruin a child's love of Lego blocks is to show them how to play with them.
Email ThisBlogThis!Share to TwitterShare to FacebookShare to Pinterest