My district has difficulties obtaining and retaining subs.  I do not wish to speculate on the reasons behind this, but know that it's true.  It means that when I'm out, I might not have a dedicated sub for the day and that my classes might be covered by a variety of other teachers.  I lucked out yesterday and got a single sub all day AND he happens to be a friend of mine.

A major advantage to being friends with your sub is that he/she can keep you updated on student progress and behavior throughout the day.  The students also know that I will get a full report.  For example, one of my students wrote on the board, knowing full well that he was not supposed to.  He wrote something along the lines of "TURN UP! MR. AION IS NOT HERE!"  I pride myself on having fairly good classroom management skills.  It's one of the few things that I think I do close to correctly. 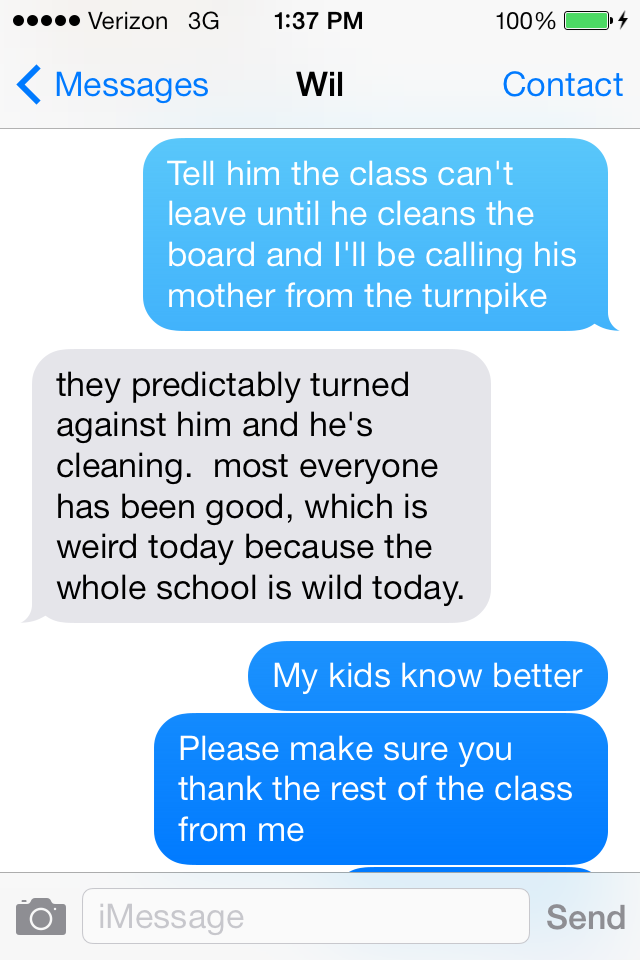 I hate being absent!  I hate it, not because I mind being out of work, although I do, but because I never know what I'll come back to.  Last year, I came back from a day off and my sub had allowed my students to destroy, break, rip, or otherwise ruin every game that I had in the room, as well as a number of posters.  My students, who would NEVER behave this way when I am there, take full advantage of allowed chaos.  I was annoyed with them, but more so with the person who is supposed to be watching them.

Yesterday, my sub followed my plans, kept me updated on their progress and maintained order in my room to the point where I didn't know that I was absent.

In geometry, we went over the guided notes from the first section of the new chapter on logic.  We discussed conjectures and how I will expect them to justify their answers from given statements.  We talked about counterexamples and the difference between opinion and proper justification.

As an example, perhaps foolishly, I brought up same-sex marriage.  I did not do this to say that it was good or bad, but simple a controversial topic that was currently being discussed in the country.  I asked students to give me, without judgement, some of the arguments for and against that they have heard.  As I expected from this fairly liberal group of students, the main argument that I got in favor was "it's just the right thing to do" and the main against was "it's not natural and gross."  I asked the students to talk about whether either of these arguments can be backed up with anything other than opinion.  Both sides conceded that they really couldn't and that they could find counterexamples to both arguments.

I probably should have used a mathematical example, something that included an image of angles with the question "What can we tell about these? How do you know?"  I chose not to because those examples are in the guided notes that we went over.  Also, I wanted to help students draw a connection between skills we develop in class and how they might be employed in the "real world."  I think we spend time talking about where students will use the content but not enough about where they will use the skills.

The teaching of non-content skills was the subject of last night's #MSMathChat.  The point was not to stir up controversy, although it did, but to get students to begin thinking about supporting their arguments.  I don't expect to get angry parent phone calls, but if I do, I stand by my approach.  I was VERY careful not to advocate for one side or another, allowing the students to put their opinions out there without judgement from me.

Although, I will admit that when one student said we should make our laws based on what's in the Bible, I asked him if I should stone the female students to death for calling out...  That maybe wasn't the best idea.

On a much more happy off-topic note, today was one of the days where the warm-up was given to us by our reading coach in an effort to integrate the same vocabulary across the core subjects.  Today was about medical records for adopted children and a genetic disease.  The question was "If a child has a 50% chance of getting this disease if their mother has it, what are the odds that they will get it?"  Even the slowest of my students were able to understand the question and get the right answer.

So I extended it!

I drew a Punnet Square on the board and talked about genetics for 20 minutes!  We talked about inherited traits and dominant alleles.  The second question was MUCH better.

Three siblings are adopted together. If each child has a 50% chance of having FH, what are the odds that at least one of the three children has FH?

The kids in both the geometry classes and the pre-algebra classes asked great questions about genetics and probability and we ended up in a discussion about dependent vs. independent events.  I don't like lecturing when it's about content, but I've found that when we talk about stuff that isn't "mathy" the students grab onto every word.  I think it may have something to do with the spontaneous nature of the discussion, allowing them to feel like their questions and concerns are being heard.  They see that they can be curious about something without being told "we don't have time for that."

The last class of the day ended up doing minimal work.  There were three students whose constant talking made it impossible for me to have the discussions that I wanted to.  I hate kicking students out for anything short of a safety hazard because I feel it undermines my authority in the classroom with the students and administration.  It also gives disruptive students exactly what they want, which is to leave class, or get attention.  After changing seats, asking the student repeatedly to stop, waiting, allowing other students to ask them to stop, I am ashamed to say that I gave up.  Instead of continuing the conversation into interesting topics, I gave the assignment for class and stepped outside to call the parent.

There was no answer.  I left a message.  As soon as I was finished trying to talk, the disruptive student put her head down and sat quietly.

You would think that, as the parent of toddlers, I would know how to deal with this behavior.  After 9 years in educations, I still don't know how to appropriately handle it.  Disruption for the sake of disruption.

I need to ruminate on this and try to contact her parent again this evening.

I am torn between not wanting to give up on a kid and not being able to allow one student to disrupt the learning of the rest.  I know that, as teachers, we are never supposed to give up on any kid, but the reality is that we have a very large number of students and a limited amount of time.  Sometimes, single students fall by the wayside either by accident or because they leap from the train, laughing the whole way.

If you ask the question "When is it ok to give up on a kid?" the answer is, and should be, "never."  But taking a time-out to mentally regroup is sometimes necessary.  You just have to make sure you jump back into the fray, with redoubled efforts.
Email ThisBlogThis!Share to TwitterShare to FacebookShare to Pinterest