Posted by Justin at 3:56 PM
Sadly, we missed half of my geometry class for students who had to finish their CDT testing from yesterday, but once we got back into the class, we ROCKED IT!

I had the students who came up with band names write them on the side board: 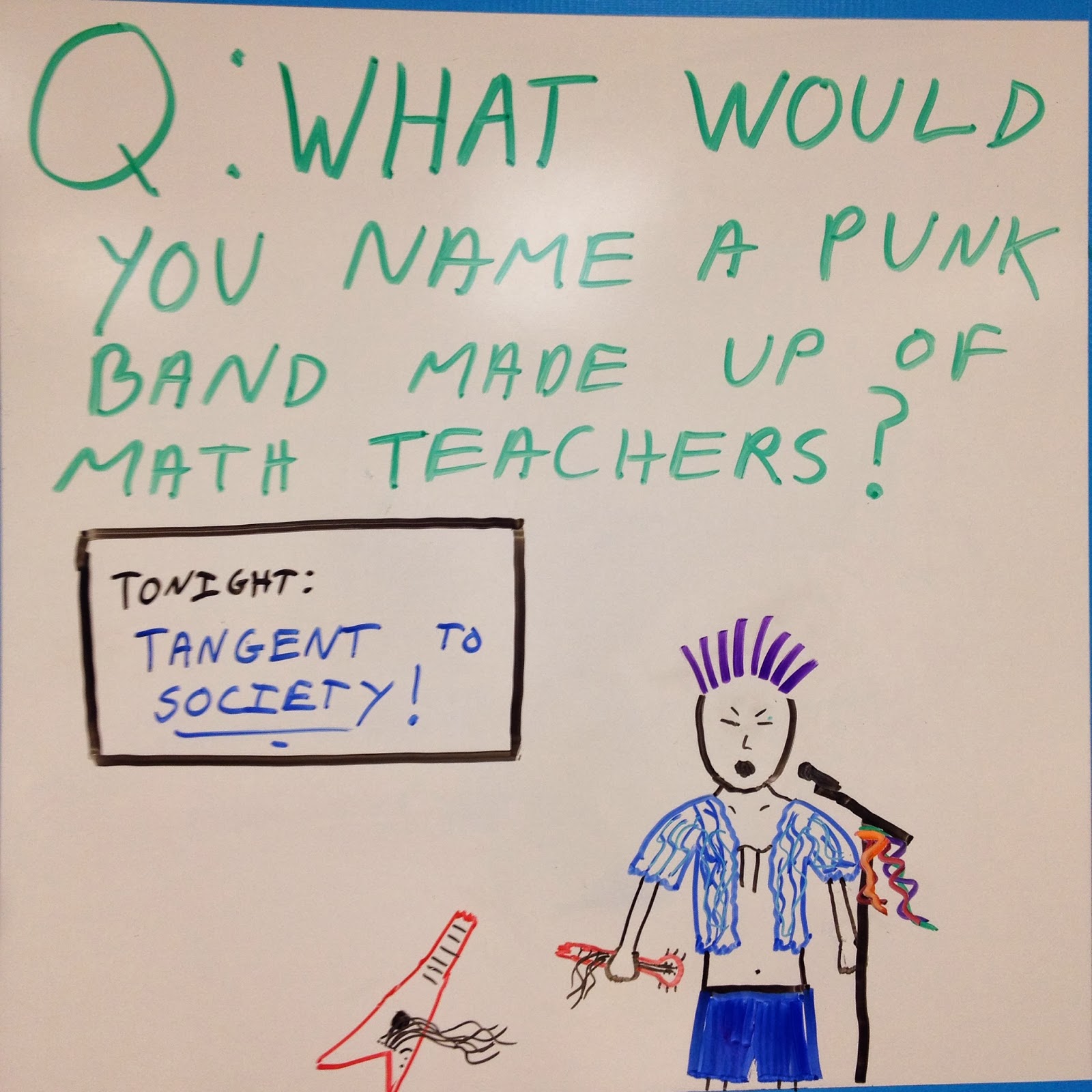 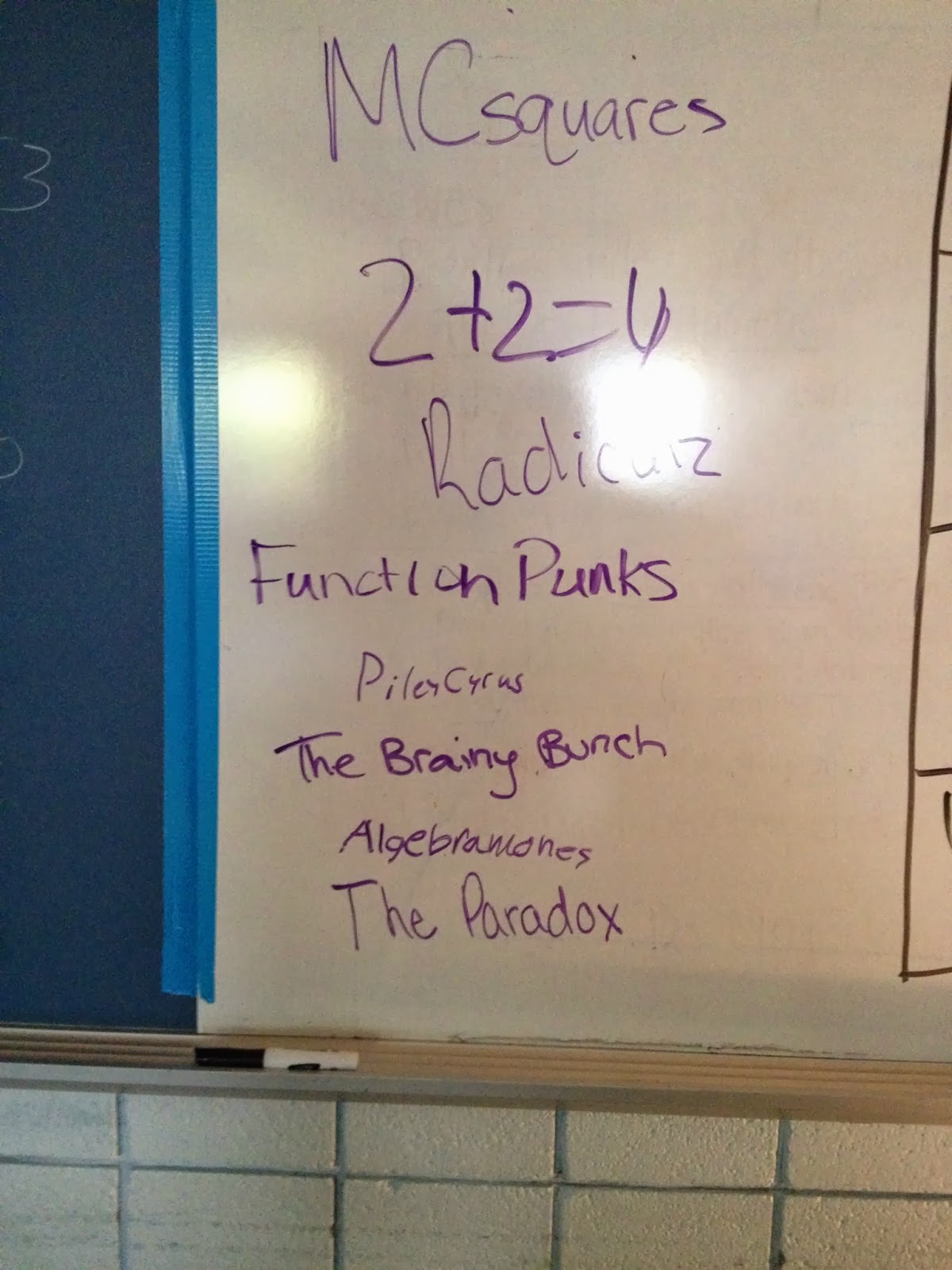 Then we started the lesson off with a video:
I asked them about the logical progression of thought that Sarah uses to pass the doors.  Thankfully, with this clip, I was able to avoid a discussion of cod pieces.

I then told them the story of the king who wished to use logical puzzles for his trials, rather than evidence.  He brought prisoners before two doors and told them that behind each door was either a lady or a tiger and they had to solve a riddle to pick which door to open.  I had the students work in their groups with white boards and I gave then 3 minutes for each puzzle.  At the end of each one, I had them hold their boards up to tell me which door their group chose.  Then based on the majority of the class, I opened one door after asking a random student to explain how they came up with their choice.  If they lived through the choice, their group got a point!

The Lady or the Tiger

The file is a little dull, but the doors move to reveal the tiger or lady.

The discussions that were happening as I walked around were amazing! A few groups used truth tables (because we just did those and they have been trained that you use something in school immediately after you learn it) but most didn't.  Many of the groups talked through their reasoning based on whether the signs above the doors were true or not.  There was LOTS of deductive reasoning happening, which is what I wanted!

I think Fawn would be proud of me!

Having been so disappointed with how I executed the candy bar fraction multiplication lesson, I thought pretty hard about the division lesson.  I hate saying "We don't like dividing fractions, so flip the second one and multiply!"  I would much rather the students discover that on their own, with a bit of guidance, because then they understand why.

So I used an extension of the chocolate bar example from the other day to talk about division of fractions. 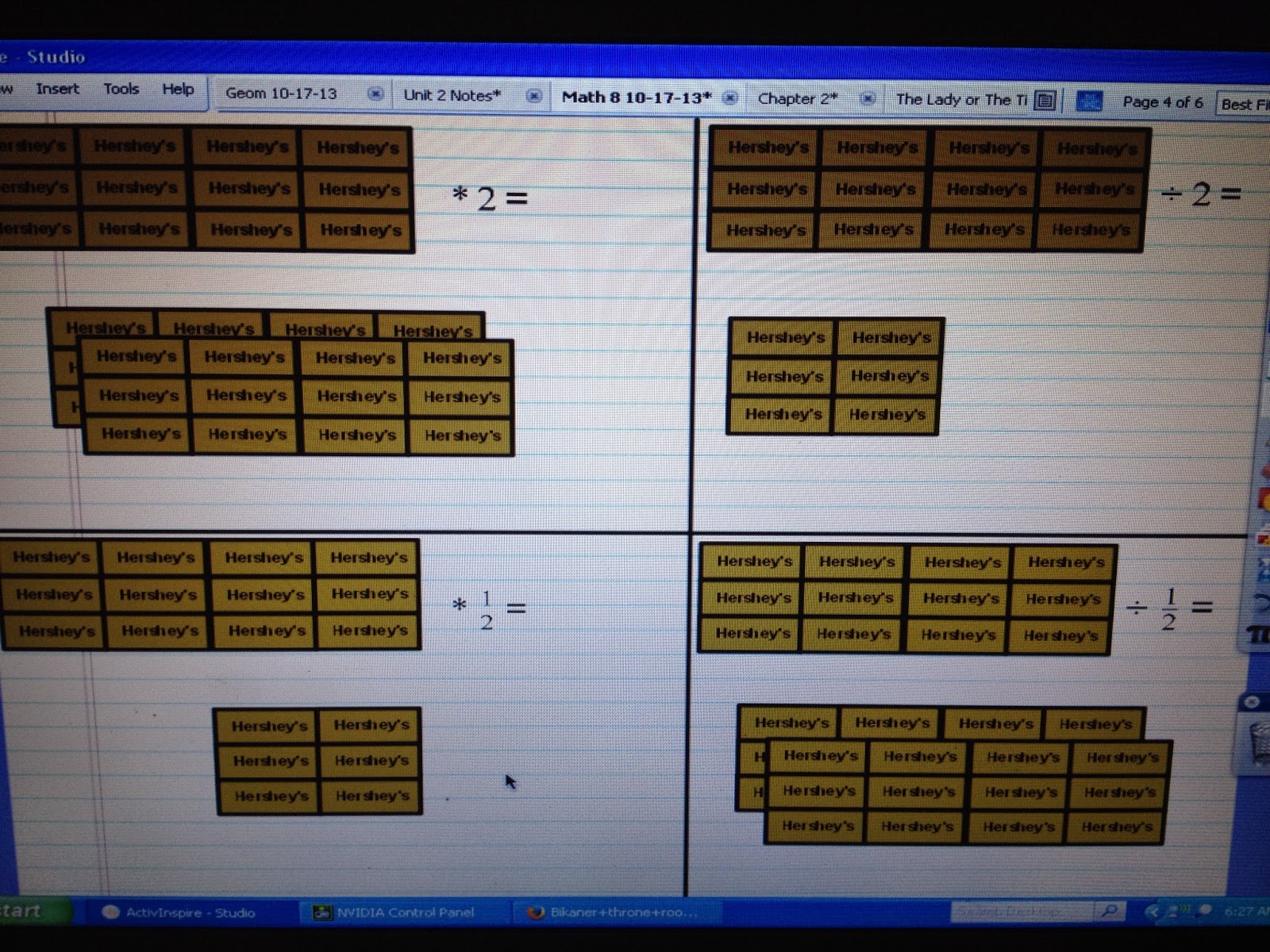 I went through it VERY slowly, making the kids answer all sorts of questions and explaining their reasoning.  We did several examples on the side board, with me using the phrase "Well, what about this?" (which, for some reason, I always hear in Karim's voice.)  They started out the class a bit detached and I was worried about engaging them.   Then they began to tune in and, seeing success in something they previously thought was difficult, 90% became fully engaged, volunteering answers and asking great questions!

One of the students said "Can we stop talking about it and just do it?"
"YES!  YES YOU CAN!!!" 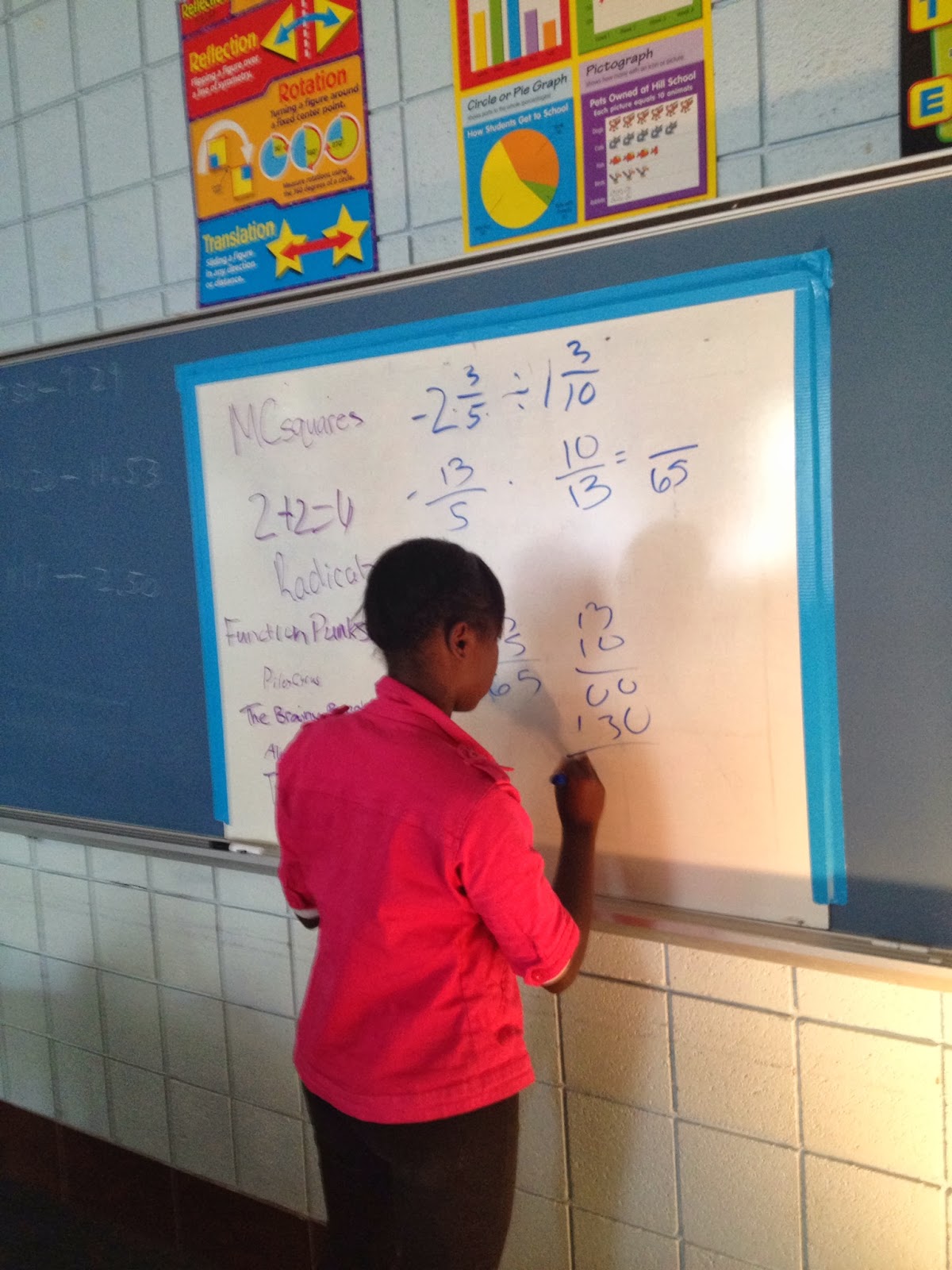 My enthusiasm MAY have scared her.  They worked VERY well for the rest of the period, finishing the assigned practice problems and more, staying on task and asking great questions.

Making something that seems difficult into something easy.  Who would have thought!


The last class didn't catch on as well.  I don't think I taught it any differently, so the mitigating factor may have been the 13 interruptions to my class.  (4 times interrupted by girls laughing/talking, 1 time kicking said girls out, 1 time explaining to security why I was kicking them out, 2 times explaining to the class about how their education was being compromised, 1 time for security bringing me referrals, 1 time for the students being sent back to my class, 1 time for the behavioral specialist bringing the students down to find out if they could come back and where he should send them, 1 time for the principal to come and tell me that I had to send referrals up with the student and 1 time for me to sit and write the referrals.)

All in all, though, it was a good day!
Email ThisBlogThis!Share to TwitterShare to FacebookShare to Pinterest