Posted by Justin at 4:48 PM
I was pretty proud of the picture today and VERY impressed with some of the answers I got, most of all "California" because of the reason he gave. 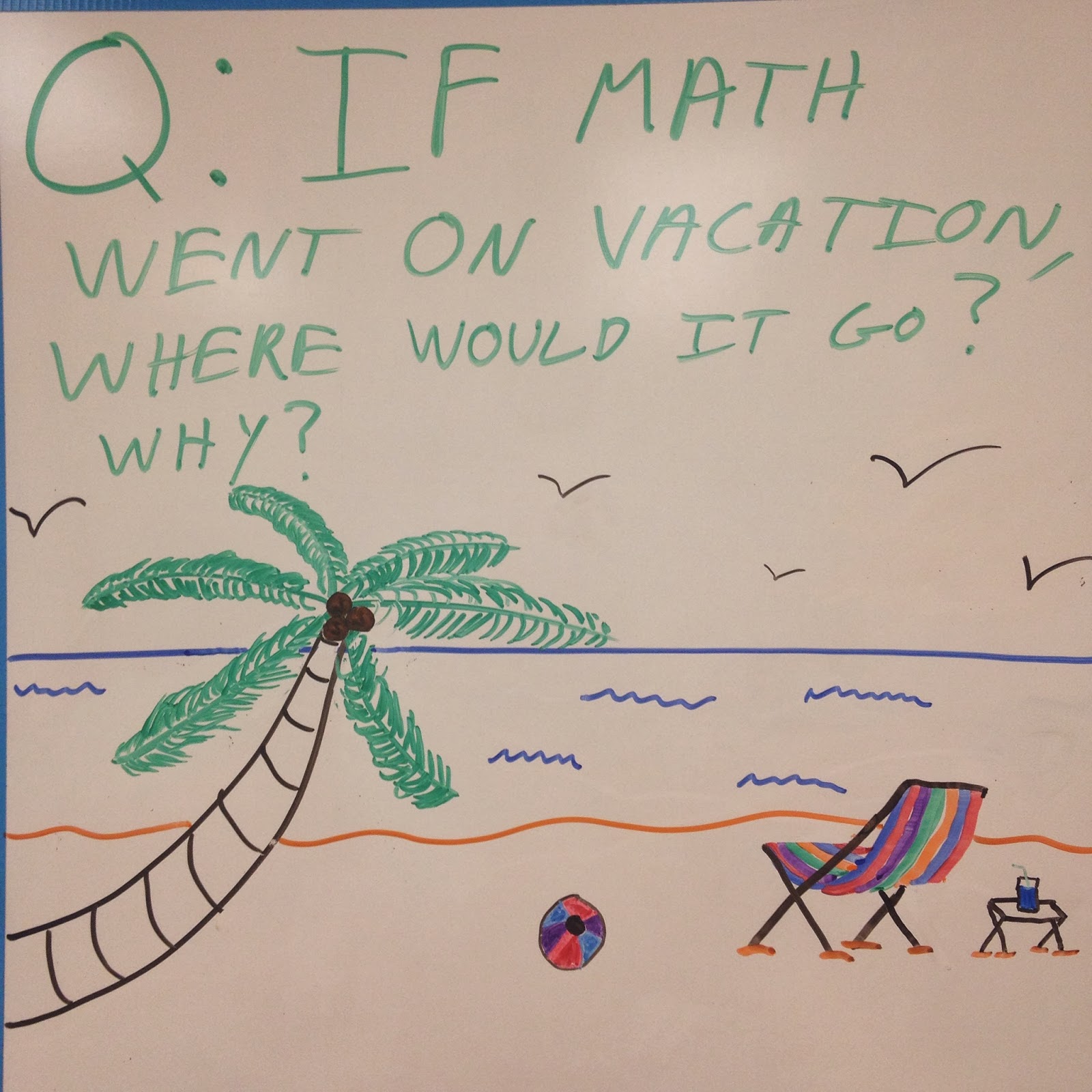 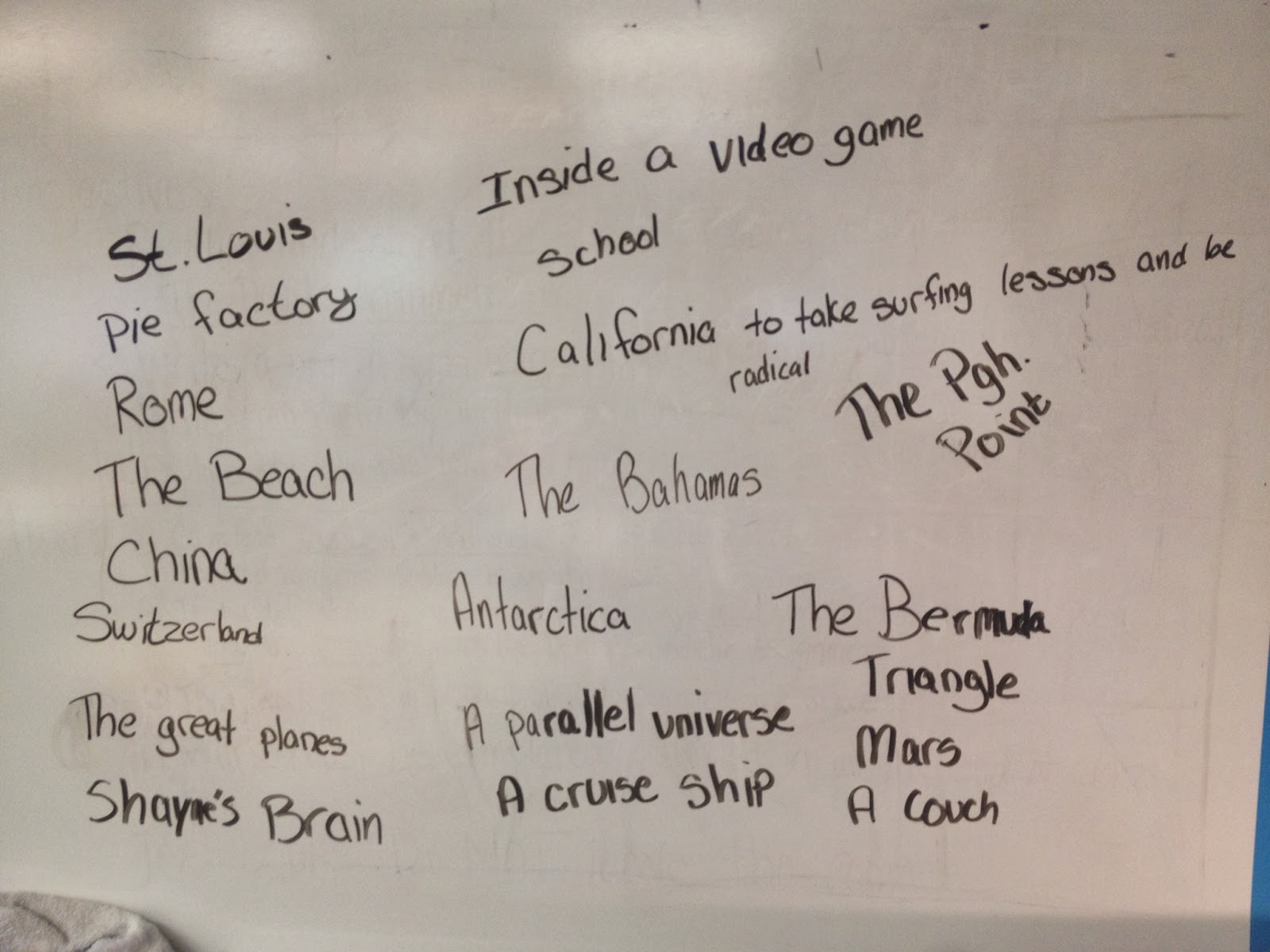 A lazy day for me!  I was feeling the effects of P90X from Tuesday and not having run in over a week, so I was physically exhausted.  I had an interaction with a distant colleague (whom I love and respect) this morning is which I was thoughtless and hurt her feelings, so I was mentally worn.  I spent much of the morning thinking about how I could have been more sensitive to her feelings and, being regretful about it.

Luckily for me, there was a field trip for the students in our GATE program (gifted) which ended upbeing about 70% of my geometry class.

We spent much of the period talking about random things including religion, zombies, viruses, and whatever else the kids asked about.  They were highly engaged and asked good questions.  After a bit, I gave them the assignment we were GOING to do in class, knowing they would work on it either in class or tonight.  It's awesome having kids who I don't have to harass about their work.

In pre-algebra, we did more work using the rectangles to solve addition of unlike fractions.  Several students asked really great questions about how to deal with negatives and we had a good discussion as a result.  After a discussion on the #MTBoS last night regarding mixed numbers versus improper fractions, I made sure to emphasize both in the approach today.  Using the blocks makes it MUCH easier for students to see how the mixed numbers and the improper fractions are equivalent.

Moving from an abstract to a concrete method for this concept has brought a few VERY interesting things to light.  First, some students who are normally engaged seem to have tuned out.  When I asked them about it, their responses seemed to indicate that they felt working with blocks was baby stuff and they were too old for that.  I tried to explain that they didn't have to use the blocks.  Whatever worked for them is the one I want them to use, provided they show their steps and they are legit.  My goal was not to force one method over another, but for some reason, this method struck them as so juvenile that they refused to participate.  Just wait until I start singing songs later in the year...

Second, several students who had been tuned out before seemed to perk up and become HIGHLY engaged, asking great questions and doing all of the practice problems.  One student in particular who has done almost nothing all year has been producing great work during the last few days.

I am making sure to shower those kids with praise and commendations, giving them as much attention as I can.  Positive reinforcement is king!

I keep snacks in one of my drawers and have told a few students that, on days when they miss breakfast, to come and see me.  I know that many of our children don't eat breakfast and only eat lunch because we give it to them for free.  It's just a function of where I teach.  Occasionally, a student will approach me quietly and ask for something to eat and I will happily give it to them.

Yesterday, a student approached me after class and asked for something to eat.  I asked her if she was alright and reached in the drawer for a cereal bar.  When I turned back around, she had tears streaming down her face.  I asked her what was wrong and she said there was stuff going on at home.

Before I go on, I should state that I in no way suspect abuse.  I think it's more along the lines of typical teenaged girl drama.

I asked her if she wanted to talk about it and she said she didn't, but she was still crying and I didn't want her walking through the crowded halls like that.  I had her sit down until she was calmed down and, once the halls were clear, I walked her to class.

I checked in on her a few times throughout the day and I was debating calling home.  I decided against it because I didn't want to make things worse by asking her parents and, if I called to speak to her only, her parents might be suspicious.  So I held off.

I pulled her aside this morning to ask how she was doing and she said she was a little better, but things weren't good.  I reiterated that she could talk to me about whatever she wanted or needed to.  She thanked me and said she appreciated it.

Then she went on a field trip for the day.  I don't want to push her to talk to me, but I'm worried that if I try to talk to her parents, I would betray her trust in me needlessly.  I will keep checking up on her.  When I asked her today, she said she hasn't been sleeping and has surgery coming up for "lady crap."  I wished her the best and told her to keep me posted.

I really like some of these kids this year.
Email ThisBlogThis!Share to TwitterShare to FacebookShare to Pinterest