Posted by Justin at 4:21 PM
When I got to work today, there were two boxes waiting for me.  What could they be? 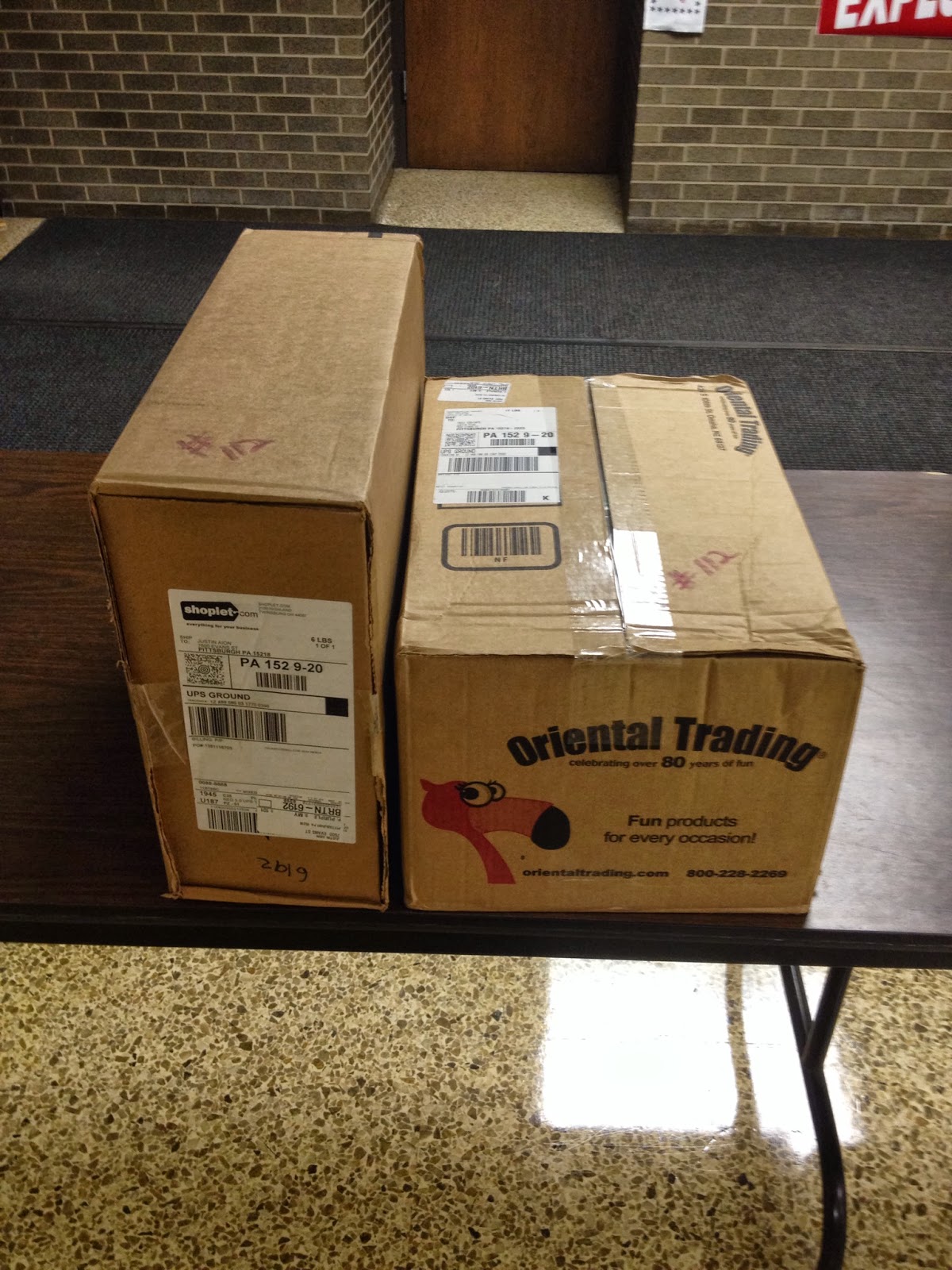 The amazing and talented Jen Silverman sent me two mysterious boxes that contained: 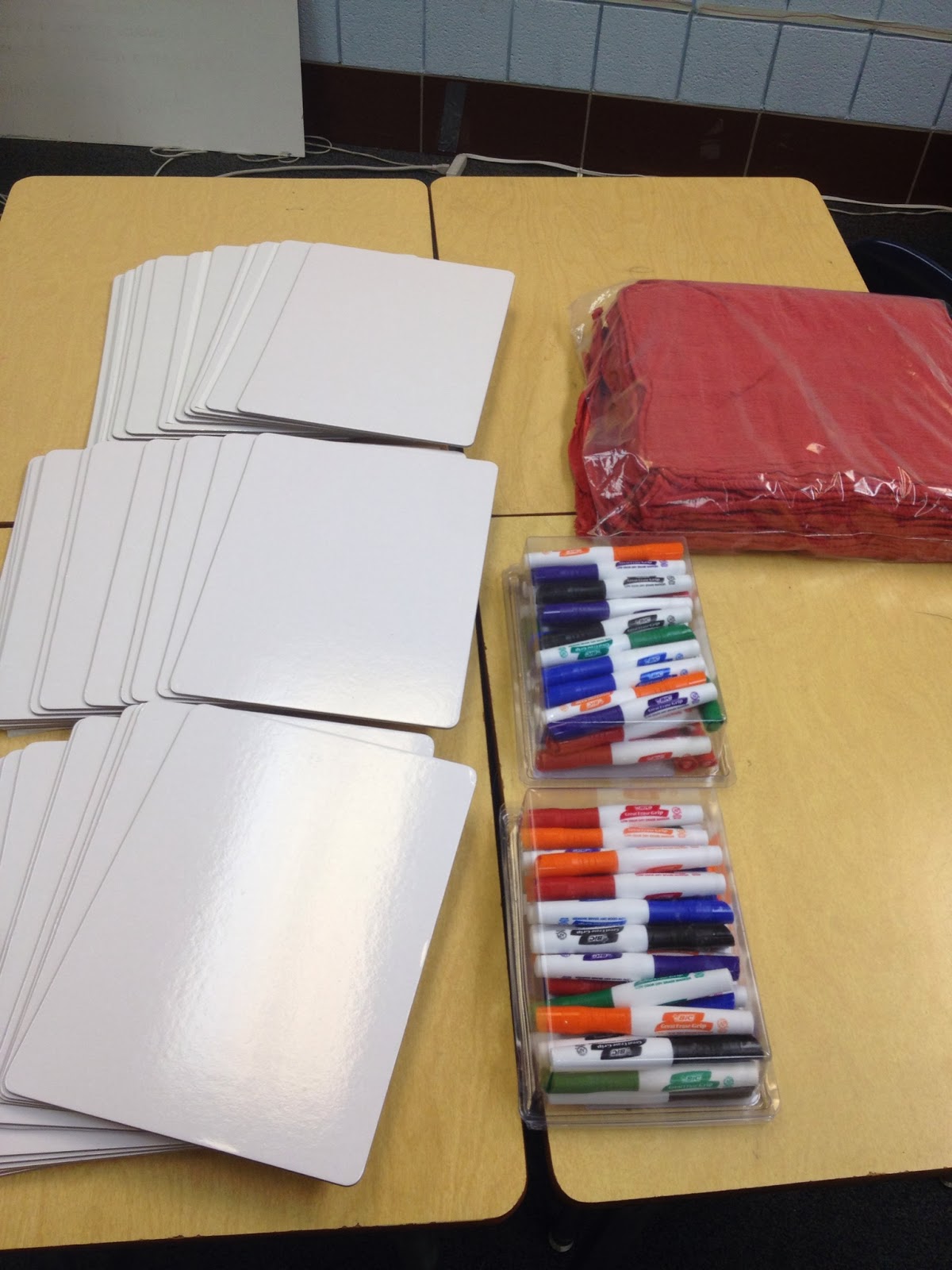 I found the boxes in the main lobby while on my way to find white boards for my activities today! The timing could not have been better!  I am deeply in her debt for a random gift which she says was just her "paying it forward!"  I now have a mission to help out other teachers in need even more than before!  If you need something, be it supplies, advice, a shoulder to cry on or someone to share a "soda" with, don't hesitate to ask!  We can toast to Mrs. Silverman.  In the meantime, head over to her blog and check out the incredible and beautiful stuff that she's doing with math!

Even my students were thankful! 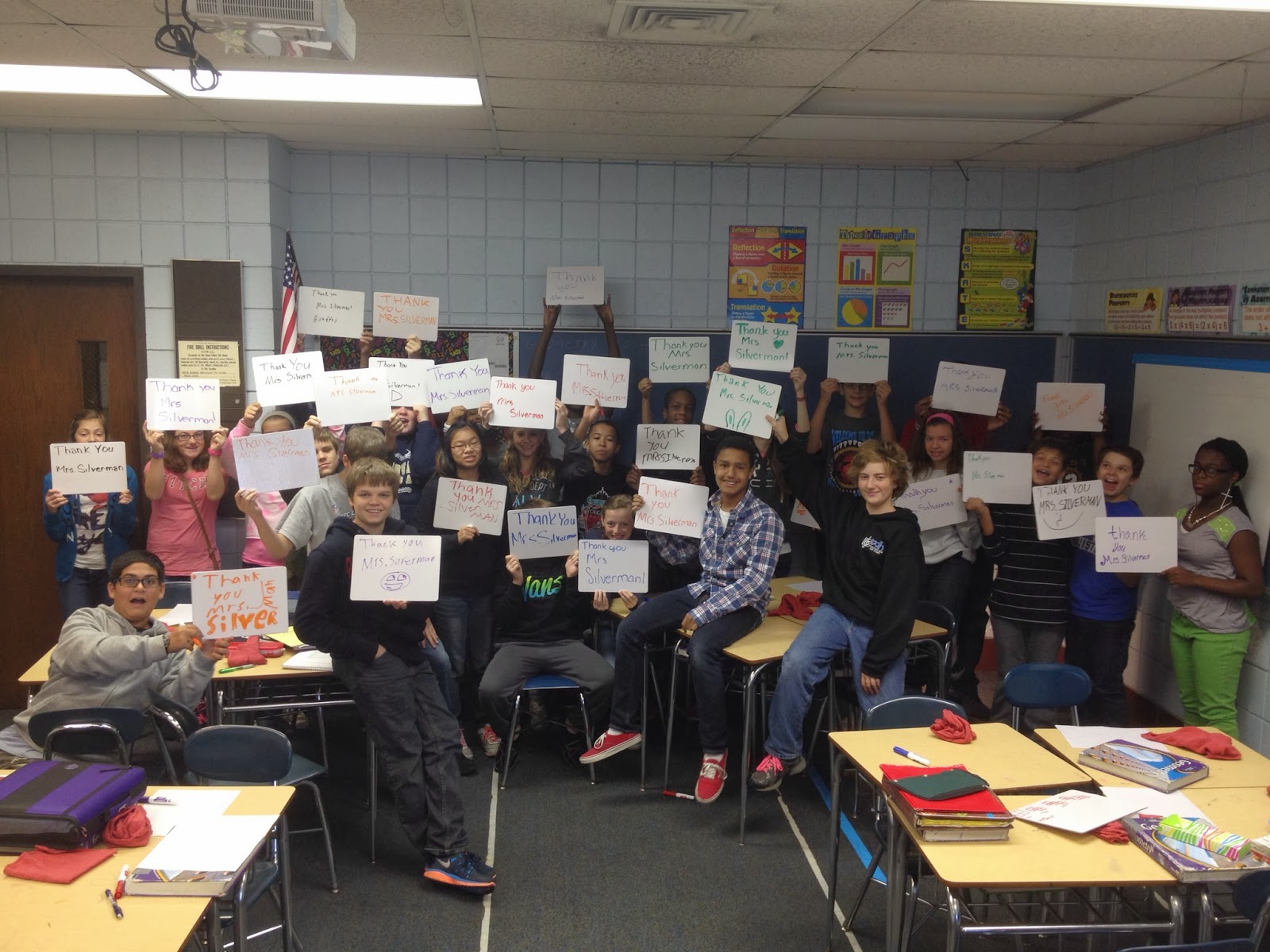 For my warm-ups today, I snagged a pattern by +Kate Nowak off of visual patterns and asked my students to come up with the number of blocks in the 10th, 43rd and nth terms. 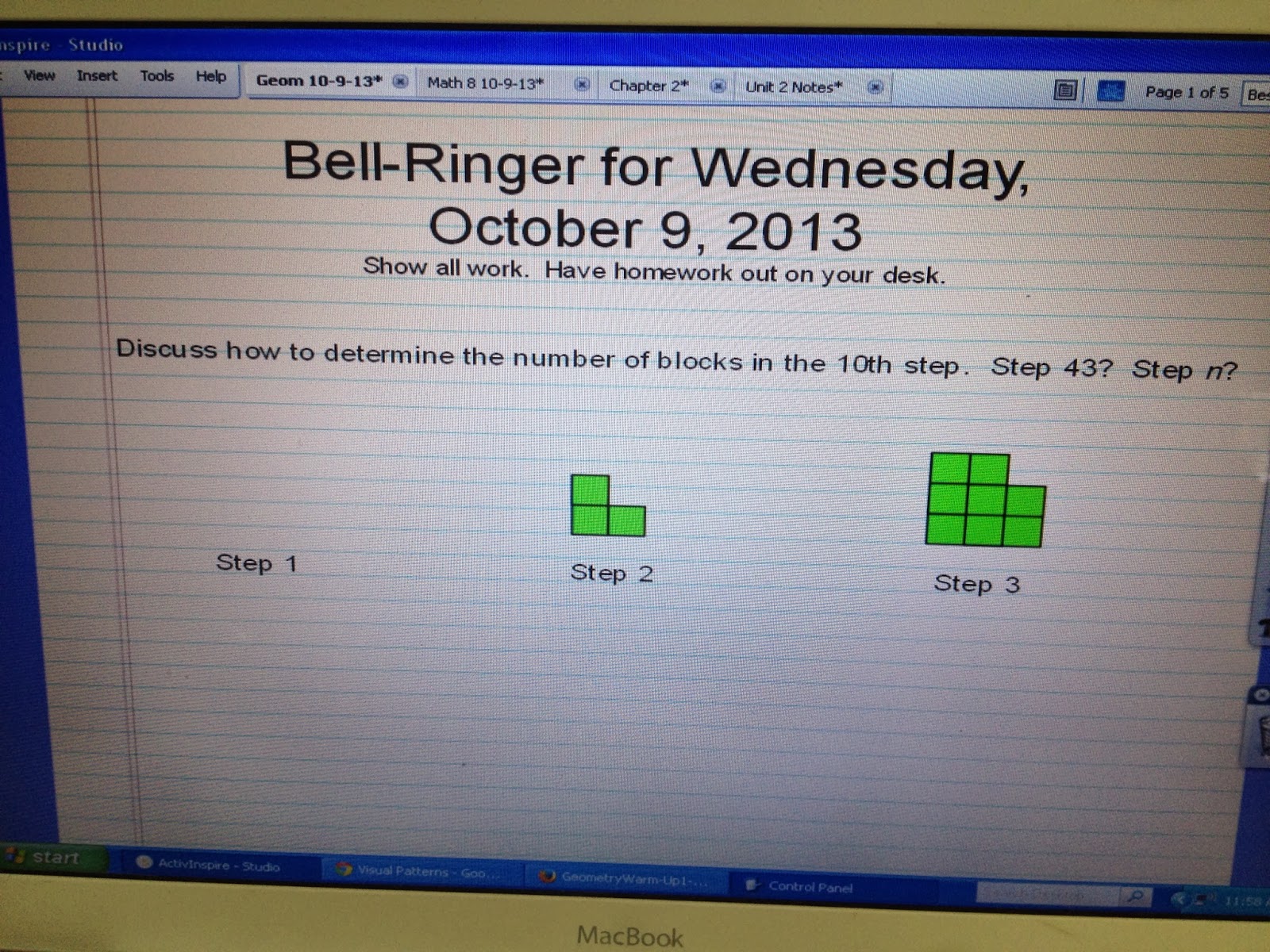 In all of the classes, we talked about different approaches to answering the questions.  The geometry students moved in the direction of a formula, while the pre-algebra students worked on finding patterns, but not specific formulae.

Since the geometry class is starting the unit on logic and reasoning, and since they were so engaged, I felt it was appropriate to continue working with patterns.  We did several different patterns and I asked different groups to talk about their strategies for solving the puzzles.  It was wonderful to watch the kids argue with their group members to make a point and then struggle to vocalize it to the rest of the class.  I loved being able to ask the class "Was this a valid method?" and having the students discuss if it was!

While working on Pattern #108, students gave me three different formulae and, when they explained how they were obtained, it became obvious that they were pulling the pattern apart in different ways.  We got talk about how each one developed their visual style and THEN I had them see that all three formulae were just variations of each other, further illustrating the myriad ways that students can arrive at an answer!

With half an hour left, I had groups work on their own patterns to submit to the website.  We then voted on which pattern we liked the best and are submitting that one, which will hopefully be featured soon!


The pre-algebra class came up with several ways to solve their patterns as well, but none dealing with explicit formulae.  I made them verbally explain what they did and how they came to those conclusions.  We then talked about extending those results to a shape too big to draw (43rd step) or to any step (nth step) without actually talking about variables.

After we went over some word problems dealing with converting decimals to fractions, (which very few students seem to have difficulty with) I split the class into our teams.  I used two random number generators to create a random fraction and had the teams work to turn it into a decimal. 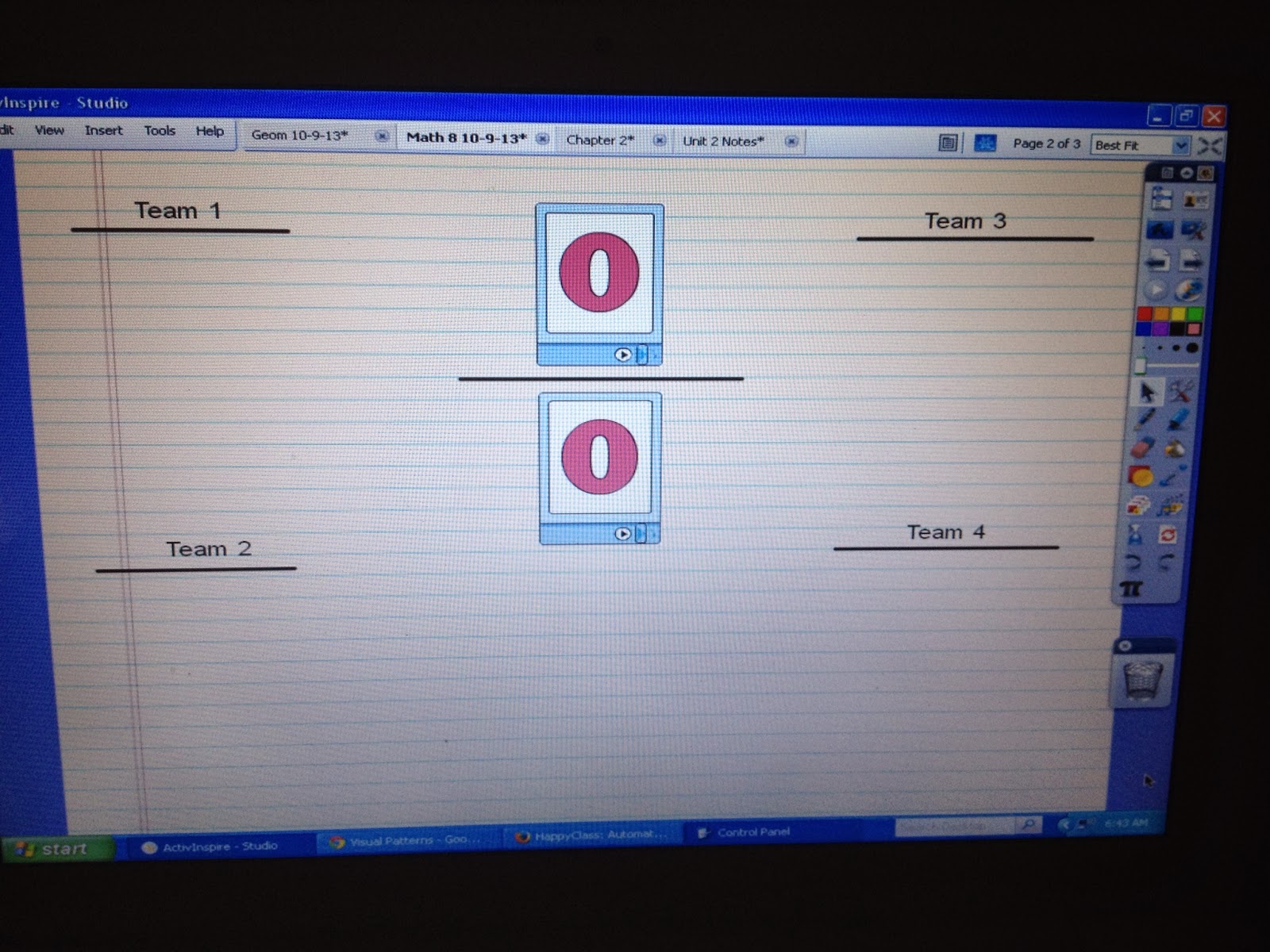 I asked them to estimate, but I was having tremendous difficulty getting them to understand that concept.  When they did the long division, they almost always got the answer, but when asked to estimate, they were WAY off.  For example, with 7/8, I was getting answers like 1.5 and one kid gave me 25.  I understand where some of the wrong answers came from, but I'm not sure how to impress upon them the importance of asking themselves "does this answer make any sense?"

I need to work with them much more on estimation.  The idea of a reasonable number seems alien to them.

The last class did not do as well.  In my few years of teaching, I have come to the conclusion that math class after lunch is a terrible idea.  Students shut their brains down and even fun activities are met with a level of indifference that I find distressing.

In this last class, there are several students who seem completely incapable of not making noise.  Even when they are not near anyone, they have to make sounds, or talk to themselves and no amount of asking, begging, threatening, entreating, bribing, etc. seems to get across the point that I simply cannot teach a class while they are babbling.  Calls home have been met with wrong/broken numbers.  Conversations with the guidance counselor have produced no results.  Again, with the same class as yesterday, I am toying with the idea of sacrificing a few students for the good of the rest.

I hate the idea of it, but I also recognize that this might not be the optimal setting for some students.  Some students may simply need more attention than I am physically able to give.

Also, it took less than a single day for students to destroy several of my brand new whiteboards.  And then the students wonder why people don't treat them like responsible adults and why they can't have tech or recess.

Ah well! Tomorrow is another day and we will have a talk about treating our tools with the care and respect that they deserve.
Email ThisBlogThis!Share to TwitterShare to FacebookShare to Pinterest