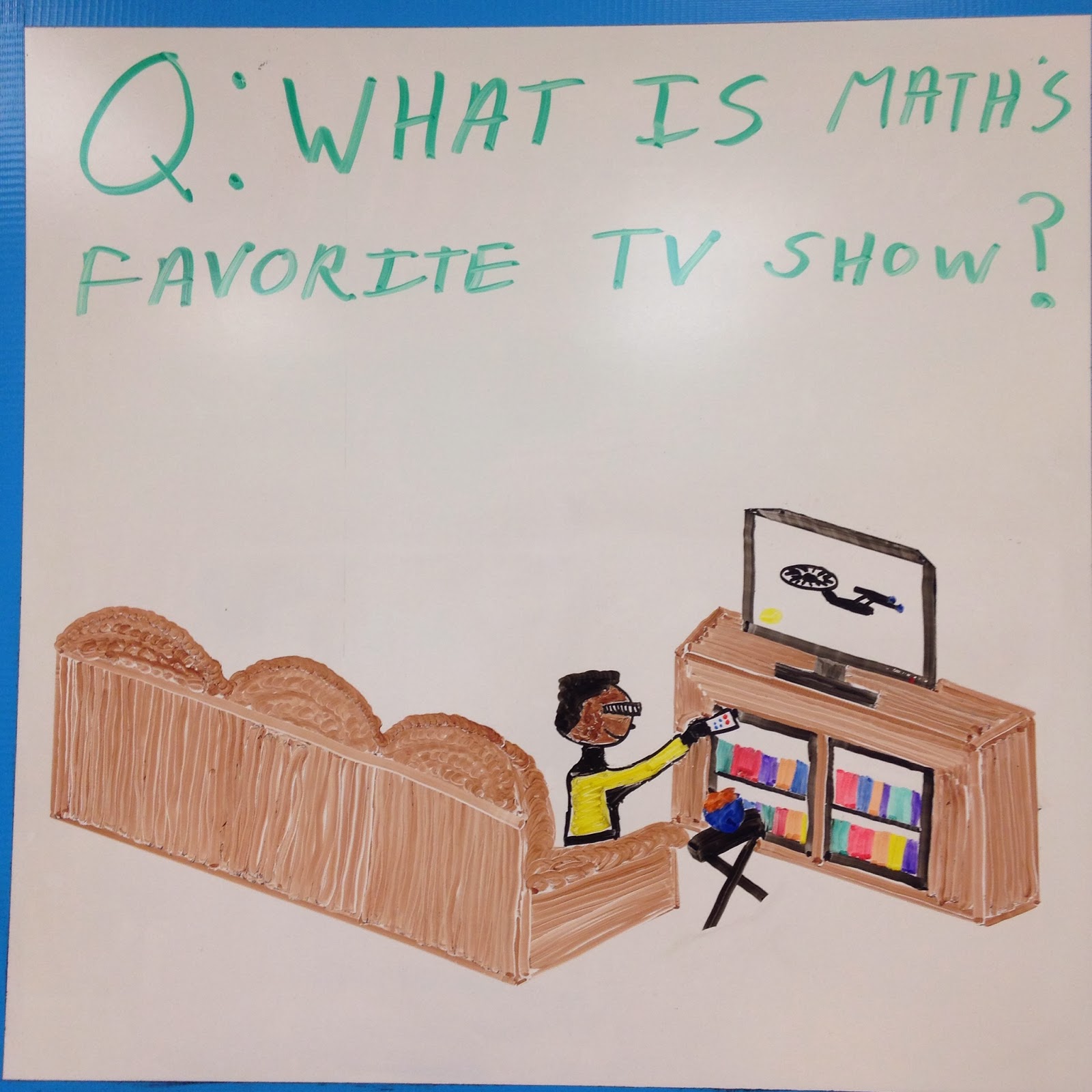 My morning question and picture prompted me to give my students an impromptu lecture on the achievements of LeVar Burton as both an advocate for education in general, reading specifically and as a strong, positive, African American male role model.  I gave bonus points to the kid who was able to come up with the name "Geordi laForge."

For almost this entire school year so far, I have been in assessment crisis.  As I have talked about before, I can no longer justify the grades that I give students as I don't think they are an accurate representation of learning.  I have yet, however, to figure out how to fix this.  I love the idea of moving towards Standards Based Grading but I have yet to find the time/energy to make the major shift or to sit down and examine the standards the way I want to.  I've found amazing resources and support on Twitter (@algebrainiac1 and @WHSRowe to name just two) but taking the leap has been more difficult than I anticipated.

So I've been doing what I think is the next best thing: I've been playing around with different assessment types.  My geometry class has been the perfect group of Guinea pigs for this because they are so excited to try something new and they trust me.  They trust that if it flops, I'll hold myself accountable and not them.

Previously, I did a group test where students were not allowed to talk for the first 20 minutes, but were allowed to pass notes back and forth within the group.  That style worked very well with the geometry kids, so I did a modified version today.  They had a group test, but were not allowed to talk at all!  For the entirety of the assessment, they were only able to communicate with their group mates by passing notes.  This may seem like eccentricity, but my goal is to get them to think about their processes and be able to not only explain it to someone else, but to be able to write about it.

In addition, I wanted them to think about the various skills that are needed for each problem and how comfortable they are with those skills.  To that end, I "appropriated" an idea from the brilliant and inspirational @algebrainiac1 and had them fill out this sheet as they went through the assessment:


Students fill out the first 4 columns during the assessment and the last 5 after it has been graded.

After a thorough explanation of what I expected of them today, I asked for any questions.  As I expected, I got one about grades.  I explained again that good or bad grades do not reflect on them as people or as students.  It is a vague measure of their understanding, but not the only one and certainly not the most important.  Assessments are times to learn, not material, but to learn how solidly they grasp that material and are able to retrieve it as needed.

"I need you to understand something else as well.  No matter how well, or how poorly, you do on this test, I am deeply proud of each and every one of you.  You have come with me on this incredible journey, maybe with skepticism at first, but now with energy and enthusiasm. You are amazing people and you are doing incredible things.  I am so very proud of you and, more importantly, you should be proud of yourselves."

Because they put the work in, I'll grade it and give it back, but I think instead of putting that grade into the book, I'll let them make corrections and turn in a corrected copy.


I am, however, VERY excited about the homework assignment I gave them:

It's opened ended with tons of possibilities for students top explore and it will lead very nicely into our next conversation about triangles.

In math 8, we began the class with a discussion of alternative assessments.  The warm-up was:

Describe how you might demonstrate that you completely understand a topic.

Several students needed clarification for this prompt, giving me answers like "you could show your work."  While I suppose this is true for the question I asked, it's not the line of thought I was hoping to induce.  So I changed my line of questioning and the answers I received were VERY telling.

Me: "If someone claims to be a cook, how do you know if they are a good cook?"
Student: "The smoke alarm don't go off."
M: "So, anyone who doesn't burn the food is a good cook?"
S: "...no."
M: "Then what else? How do you know if someone is a good cook, other than the fact that they don't burn their food."
S: "They can mix stuff."
M: "I think that might be more process than outcome. How could we show the outcome of being a good cook?"
S: "They can follow a recipe?"
M: "Again, I think that might be process. Do you need a recipe to make you a good cook?"
**it continued like this for a very long time until...**
S: "If the food looks good and tastes good?"
M: "What do we think? If someone makes tasty food, does that make them a good cook?"
S: "Yes!"
M: "So, making something delicious would be a good way to demonstrate that you know how to cook.  Is there a way to show that you know the concepts in math class, other than taking a test?"
S: "You could show your work!"

We have some work to do, but I think it will be worth it in the end.  In the meantime, I have another issue to tackle.  The assignment for today was an extended response question with multiple parts where students were instructed to "Demonstrate your knowledge by giving a clear, concise solution to each problem."  Here is the first question, verbatim:
I don't love this question for several reasons, but the main is that I was worried that it was telling them specifically what to do.

I needn't have worried about that.  I should have worried about other things.  I spent the next 45 minutes going between groups and explaining what they were being asked to do.  Once the question became clear, it became obvious that the majority of the students had no idea how to do it.  When I suggested that they take a look through their notes or text books to find a method, they were lost.

I don't even know where to begin with this.  It's as though we hadn't spent the last month and a half going over fraction operations.  On top of that, many of the students couldn't even get to the idea that they were supposed to divide 6 by 2 1/2 even though it was explicitly laid out for them.

The purpose of this assignment was to move them beyond just number crunching and starting thinking about HOW they solve problems.

I'm not sure what to do.  The first class had an amazingly difficult time with it and most of the students gave up unless I was standing over them.  I had them working in groups so that I could assist more than one student at once, but students worked until they didn't get it (a sentence or two in) and then just sat and waited for me.  I tried to tell them that I would be with them as soon as I could and that they needed to keep trying until I got there, but they wouldn't.

When I worked with the groups, holding their hands a bit as we walked through the first question, they were following along, but not well enough for me to think that it was just a misunderstanding of the directions.

Tomorrow, this class will have an additional 11 students who are coming from another teacher.  They are not at the same place in the curriculum as my students and now, I don't even know where my current students are.

I need to think long and hard about the cause of this problem AND how to fix it quickly.  Some of the causes are obvious to me and lie at both my feet and the feet of the students.

Students:
Are not taking adequate notes
Are not coming prepared to class
Are not completing assignments
Are not persisting

I:
Am not holding them accountable for their learning
Am not doing enough assessment to keep track of their progress and understanding
Am not engaging my students enough
Am not finding ways to help their retention of material
Am not adequately impressing upon them the importance of persistence


At the end of class, I asked them to please finish the assignment tonight, rewriting it neatly if necessary.  At least 7 students left their papers in the room.

I'm so tempted to fall back into "I know I taught it! They just didn't learn it!" But the reality is that if they didn't learn it, I didn't teach it.


So now I am put in that difficult position where I have to decide what to do with my math 8 classes.  Do I move on and try to incorporate as much spiral review as possible? Or do I go back and attempt intervention with projects and problems dealing with concepts that they didn't master?  Or...I don't know.

I have some thinking to do.

And I have to figure out how to incorporate 11 new students into my classroom.

I finished my day by blasting the Duran Duran station on Pandora, grading the geometry quizzes (not great) and amusing myself by referencing PeeWee Herman. 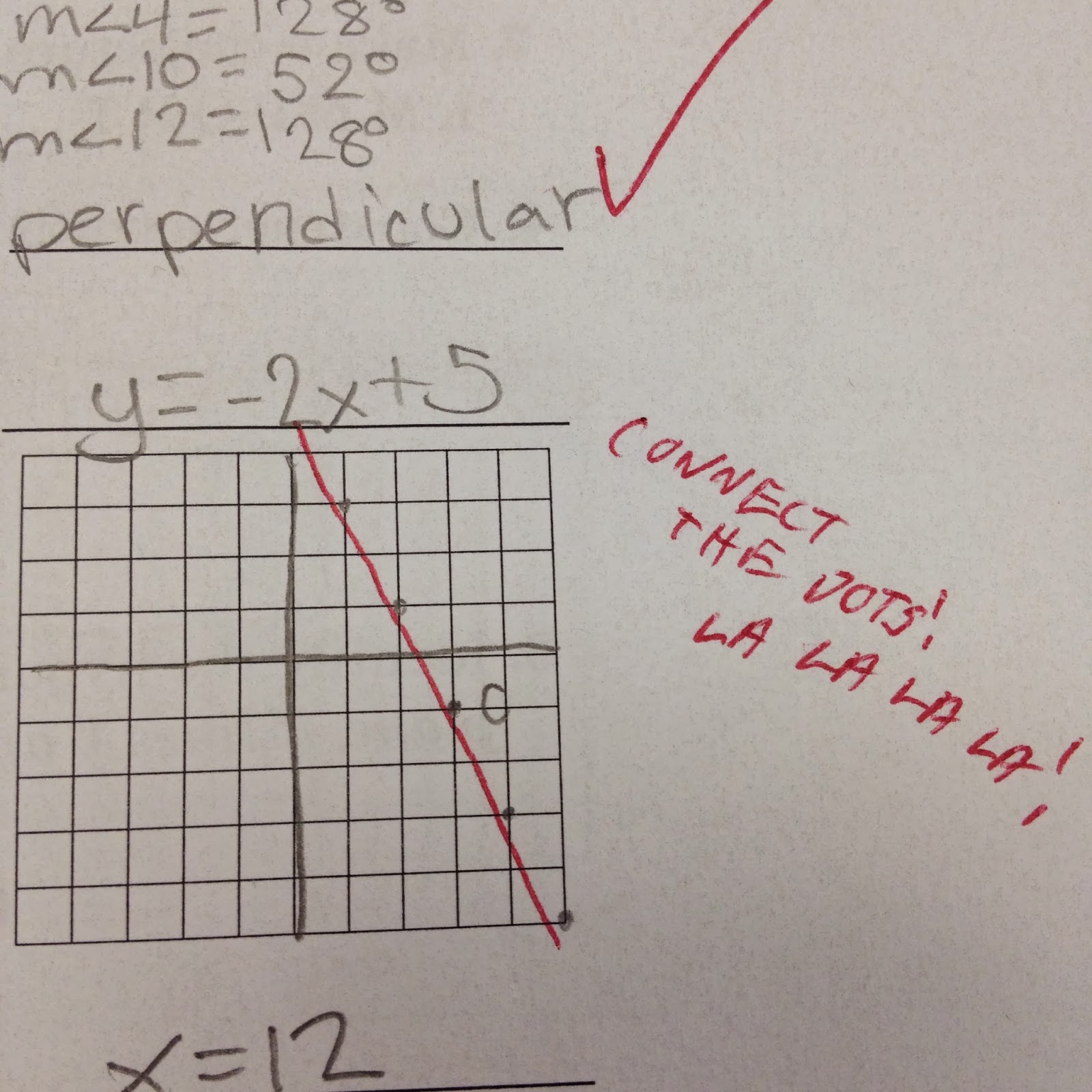