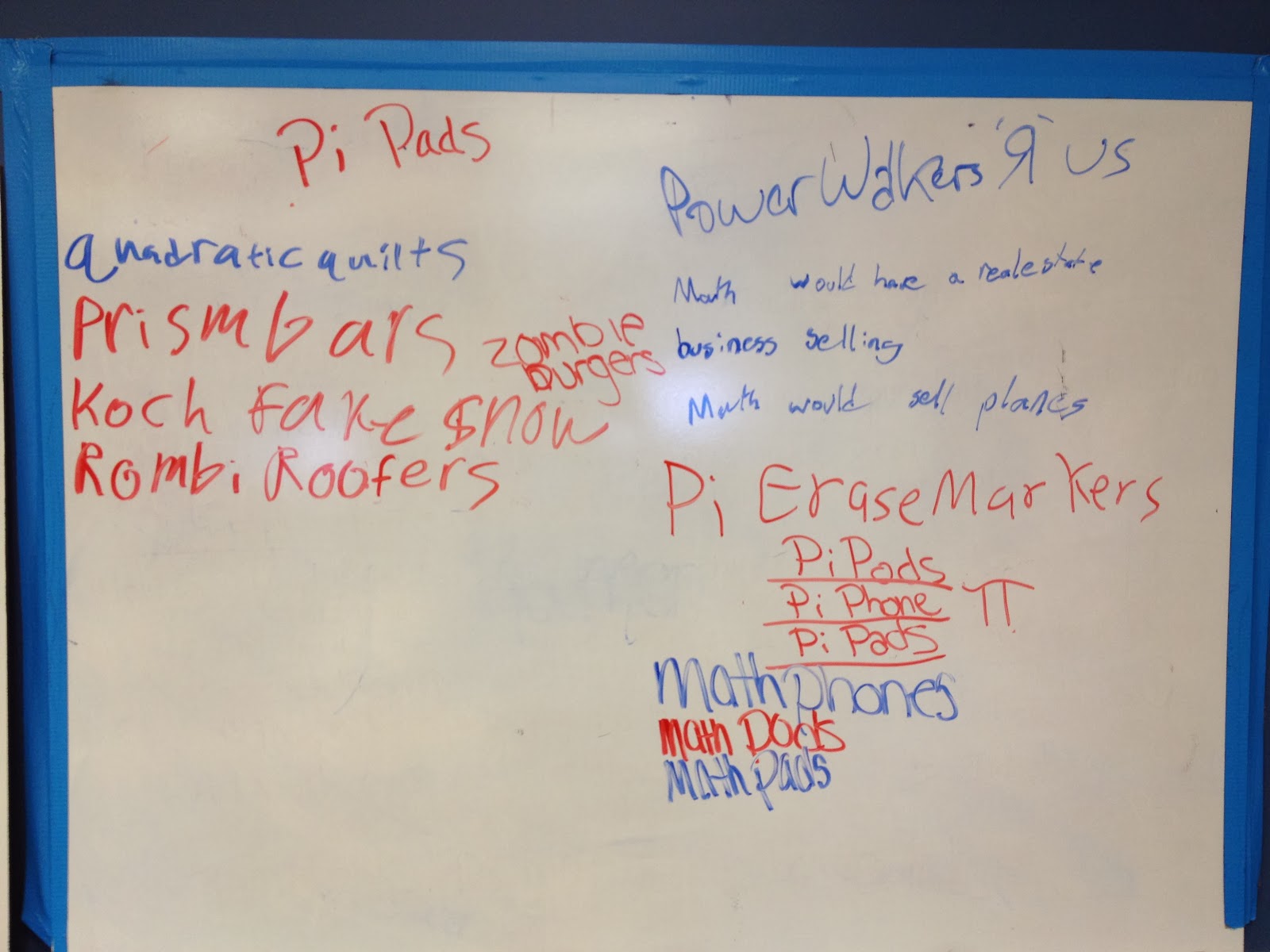 What?? Of course I didn't spend the first 35 minutes of geometry class giving an impromptu stand-up comedy act about supervillains ordering their supplies.  It would be absurd to think that my level of comfort with those and my level of confidence in their ability to be on task when I need them to be would allow me to simply talk about the hidden tab on Overstock.com where a plumber from New Jersey might accidentally stumble and spend the money that he had allocated for a seahorse shower curtain on a pair of trained timber wolves who come equipped with lasers and rocket packs.

If I DID have that confidence, then the students would have justified that confidence by immediately getting to work on their parks, asking deep and insightful questions.

In period 4/5 of pre-algebra, we went through the lesson on scale factors that I did yesterday with period 8/9.  I tried to follow the thought I had yesterday about distraction and did my best to teach, ignoring distractions unless they were directly stopping me from teaching, or my students from learning.

The result was fascinating.

The room seemed completely chaotic.  Students who were engaged were out of their seats, walking around the room arguing about how many blocks long and wide it was.  I picked two or three students who seem to have tremendous trouble staying in their seats and had them do most of the movement.

The discussion today was louder and more active.  They also came to the conclusions I wanted much faster, so we moved a little further into it.  I realized about halfway through the double period that we were at the same point as the previous day and I made a decision.  I didn't feel as though they would be able to productively work on their parks, so we continued making the scale drawing of the class.

I asked them about rearranging the desks.  How we should do it so we could fit 31 desks in the room with everyone able to see the board?  We did experiments to find out how many blocks we would have to leave open behind each desk in order to have enough room to sit. 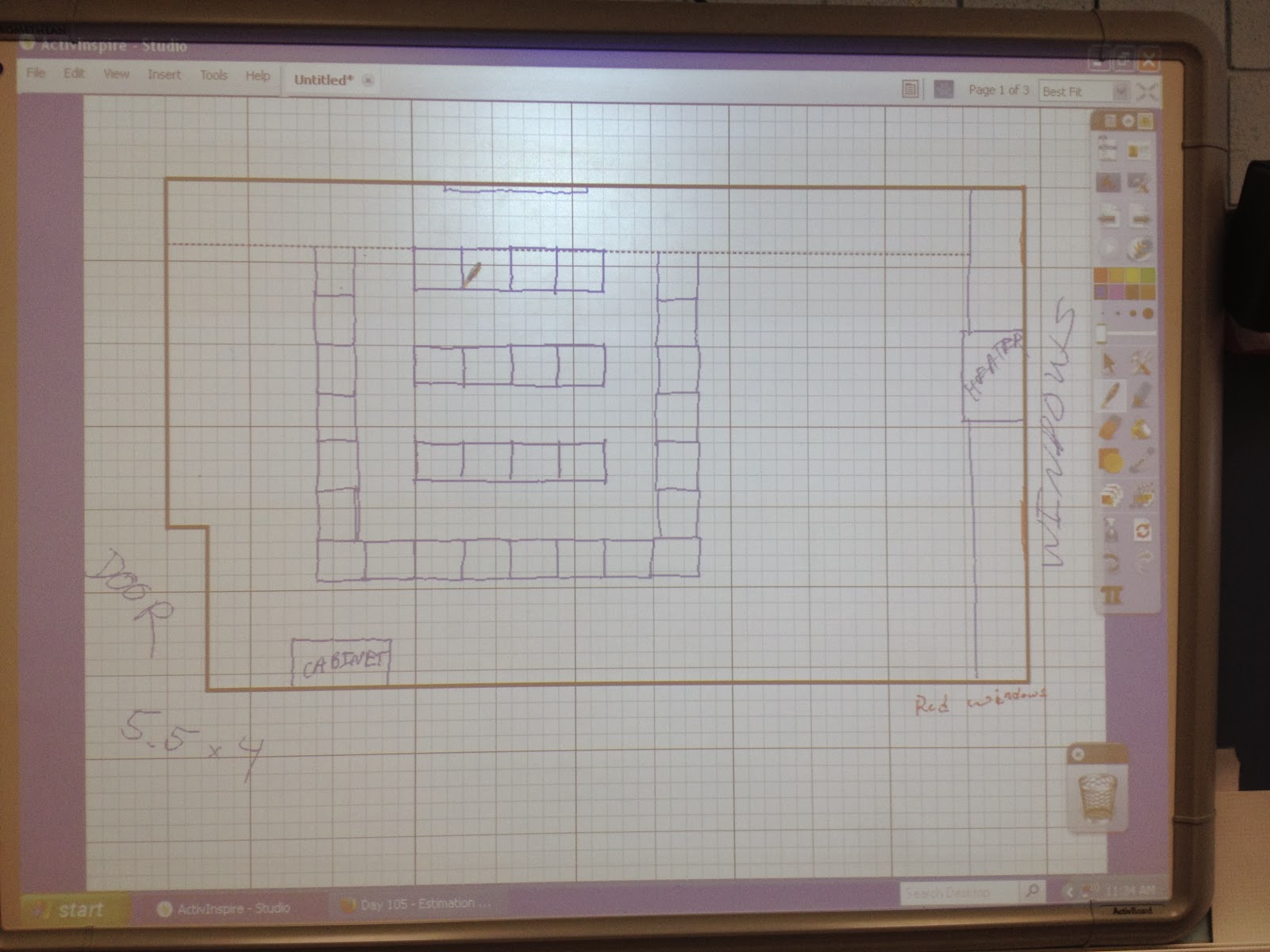 We draw the desks on the board, moving them several times to optimize the amount of space needed.  It may have gotten away from me because then we actually moved the desks.  It was a group effort and, once all of the desks were where they should have been, according to the scale drawing, the students sat in various seats to make sure they had enough room. 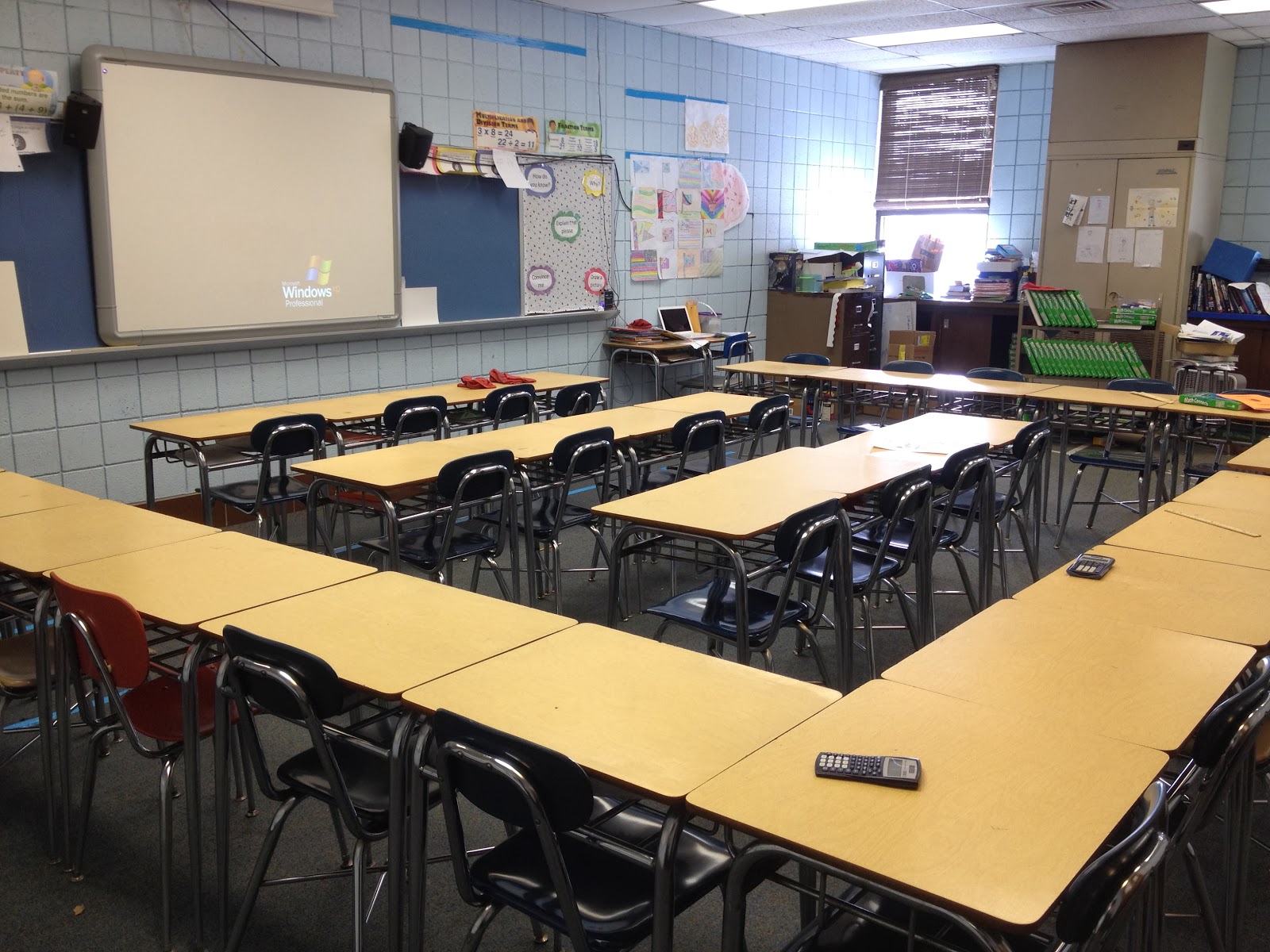 But they worked very hard on it and so I will keep an open mind.  We will try this seating arrangement for a while.


Then period 8/9 came in.  They spent the first 5 minutes complaining about the new seating.  Then, when asked to continue working on their projects, they didn't.  One group did, and one person from each of 2 other groups did.  The rest of the students didn't work on anything, or pretended to work, but clearly were not.  The few who were working asked me questions about scale as though what we did yesterday was completely disconnected.

I had hoped that giving each person in the group a specific list of jobs would guide their work but instead, what I'm seeing is students claiming "that's not my job and I can't do mine until they do theirs."

One group, in a fit of play fighting, tore up their rough draft and the folder I gave them to hold onto their work.  Then insisted that they weren't going to start over.

One thing I did not consider when assigning a project where everyone has a specific role is the absurdly high levels of absenteeism.  I don't just mean that there are some kids absent all the time, although there are.  I am missing at least 4 kids from class every day and they are usually a different 4.

One group had a member suspended for fighting and the rest refused to do his part of the project.

Several students almost starting fighting in my class because they were making up nasty songs about other students, who didn't appreciate it.


After how well class went yesterday, today feels like a betrayal.  It feels as though, with the exception of  five students, the rest are saying "That was yesterday.  What have you done for me lately?"

On one hand, I understand that they are 13, 14 and immature.  They are easily distracted and quickly forget many things.  On the other hand, I think that I shouldn't HAVE to make every day SUPER fun.  Not all days will be super fun and the students need to learn that sometimes, they just have to buckle down and do the work.  The "work" in this case is CREATING A PARK!

I feel as thought I should have built up some brownie points.  I dream of "We did a fun activity and lesson yesterday.  I can't wait to apply it today!"


As Max told me yesterday, kids are the same all over the place.  I would think that we should be able to crowd source our lessons and behavior plans and find SOMETHING that works.  Someone out there has to know how to get kids to interested in their lessons.

But I will keep looking.

I am, however, reassured by the fact that a teacher whom I consider very rational and reasonable is also having difficulty this week.  We attribute it to the fact that since we came back from Winter Break, we have yet to have a single full week with a regular schedule.

But it's difficult to continue doing activities when you can picture the kids working hard on mundane worksheets.

I may make and sell cardboard cutouts of Max Ray for people to put in the backs of their classrooms.  I'll make a million dollars.
Email ThisBlogThis!Share to TwitterShare to FacebookShare to Pinterest