Day 93: The Day No Math Was Taught 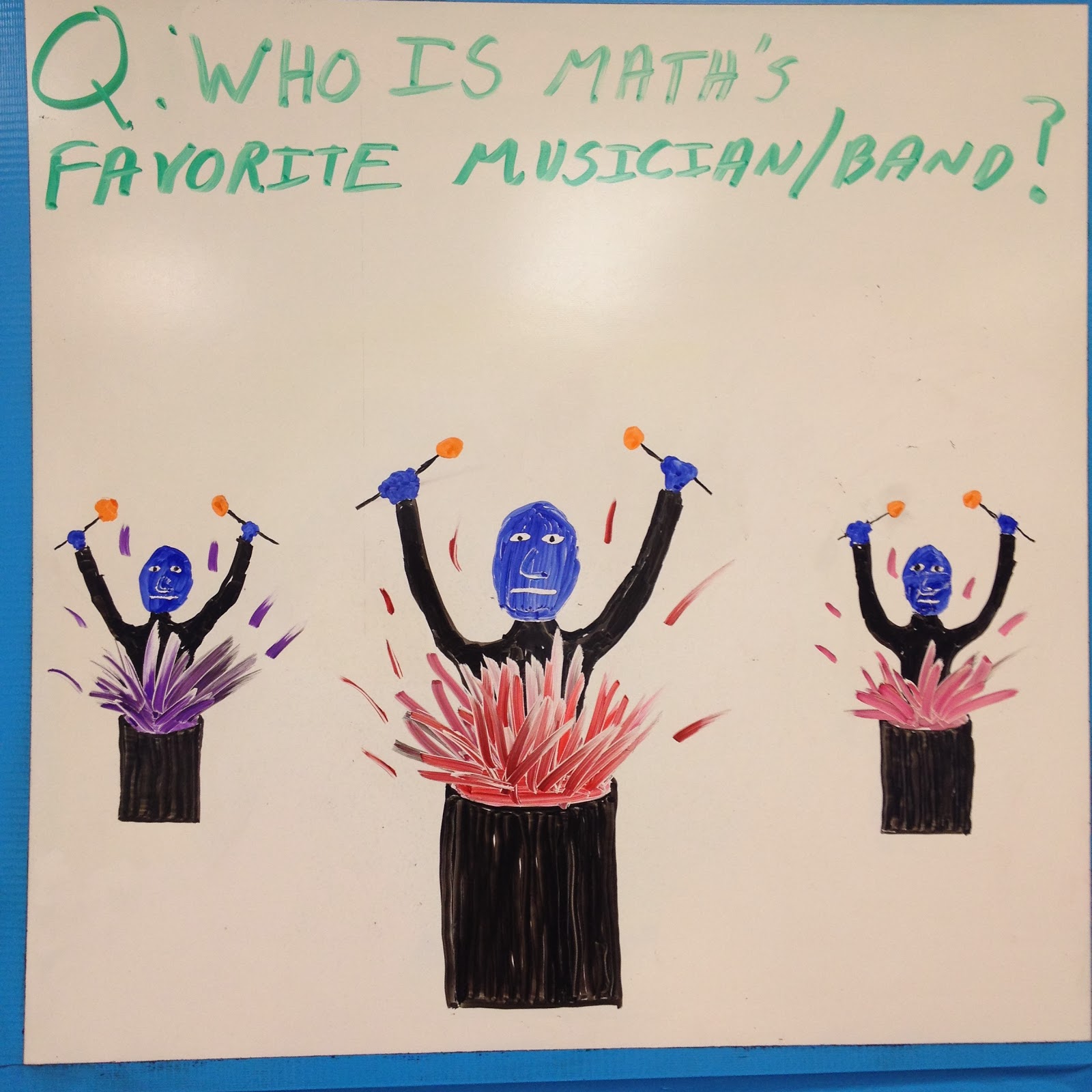 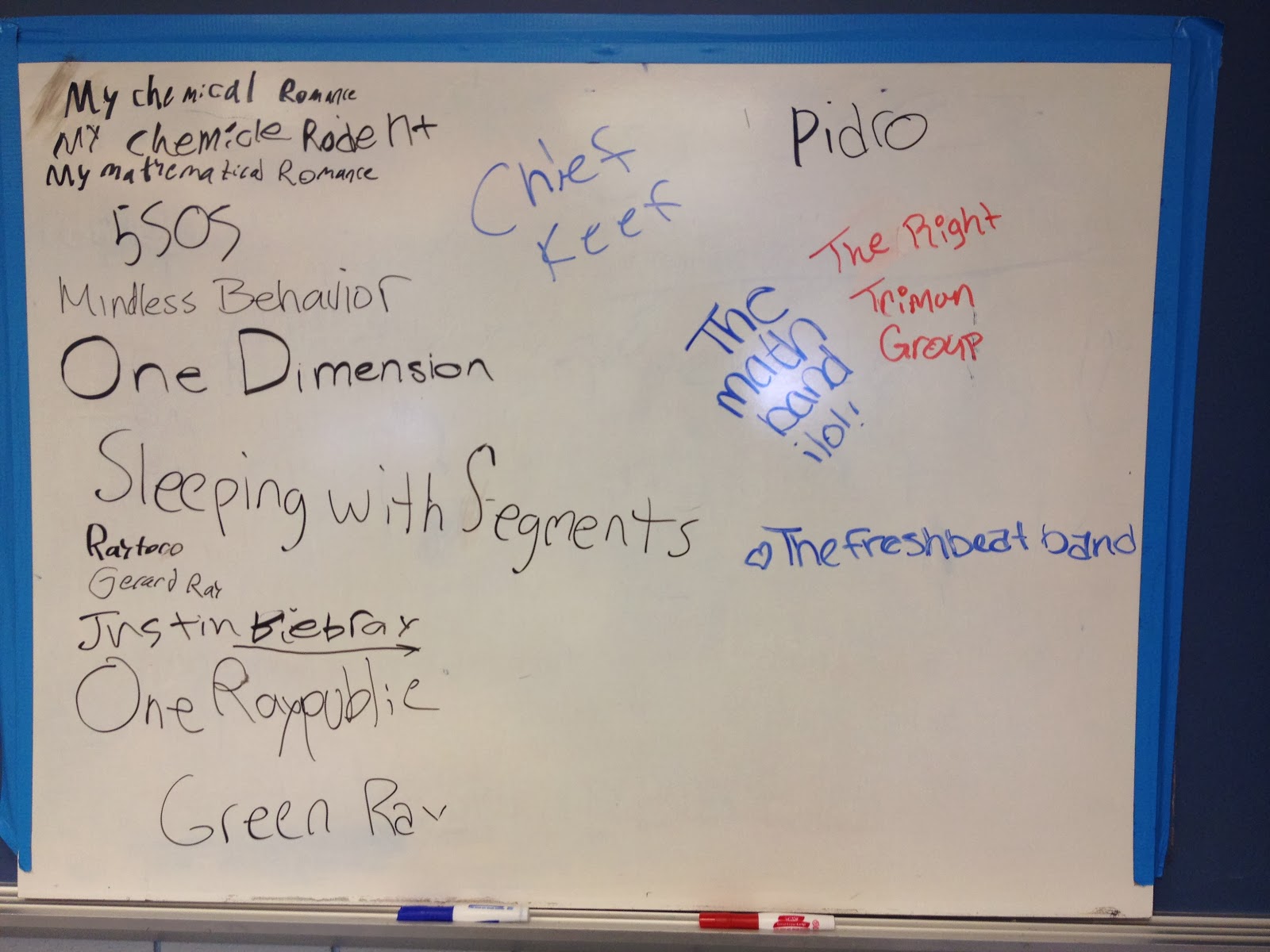 During the 2-hour delay this morning, I had an extended conversation with an adult in the building about race relations.  I'm not sure what title to give him.  He is here as part of a program to reach out to African American males and, from my understand, to teach them to be leaders and positive role models.  He and I have a strained relationship mostly due to me being overly rude.  I have tried to reach out several times this years, but I will freely admit that it has been a half-hearted effort.  Today I went to talk to him in earnest.

It began by asking him if he had heard of Rafranz Davis, an educator who is an outspoken advocate of race relations in education.  I told him about the Global Math Department presentation from Anne Schwartz about her struggle to "suck less."

I asked him about my pre-algebra classes, and we talked about why I was so opposed to hearing their message last year.  We had a very candid conversation about race that is just the start to figuring out the host of things I want to address.  I'd like to write a post about how race plays a part in my teaching, but my thoughts are nearly as organized as I feel they need to be.

I will say that I have been focusing very heavily on the decisions being made above my paygrade of which I have no control.  He reminded me that since I can't control them, it doesn't matter if I agree or not.  It doesn't change my goal here, which is to help educate the kids as best as I am able.

While I agree that I shouldn't worry about them, the decisions that I don't understand or agree with put into a challenging spot.  I know how to teach a certain way.  I need some serious help in teaching another way.  I feel as though I am so lost, I don't even know what kind of help to ask for.

Perhaps this is what it feels like to be "bad at math."


My desperate need to return to normality and regularity in my classes was thwarted again by the 2-hour delay.  My normally receptive geometry students were VERY high energy.  I didn't ask them to do much, just a few deep explanations of the theorems regarding relative sizes of angles in a triangle in relation to their opposite sides.

After several discussions this weekend about rubrics and behavior, I decided that I needed to do something with my pre-algebra kids.  If things continue the way they are going, I'm going to end up wasting this year and being just as unhappy as I was last year.  The plan for today was to not talk about math at all.

We were going to talk about good behavior and what it looks like.

I don't want to grade students on their behavior and I think that what class participation grades and homework grades end up being.  You are giving an assessment based on their habits rather than their knowledge.

So the plan is to come up with a behavior rubric on which they will rate themselves, submit it to me for feedback, but not for a grade.  If they rate themselves low on the scale, they will be asked to think about why they did and how they can improve.

They are developing the guidelines with me so they have ownership of this process and the outcomes.

I wrote down the categories that they felt were important and we began to flesh them out.  It was an interesting discussion for two reasons.  First, the majority of the kids freely acknowledged that their behavior generally wasn't good.  They also knew what behavior was expected at school and, more importantly, WHY it was expected.

Second, even during a discussion about what behavior they think is appropriate, there were several students talking loudly and carrying on.  I asked them for their opinions, which they happily gave before going back to talking about football, or shoes.

All in all, it went well.  I'm going to write up what they said and we'll have another talk about how THEY developed these and it would be super if they could stick with them. 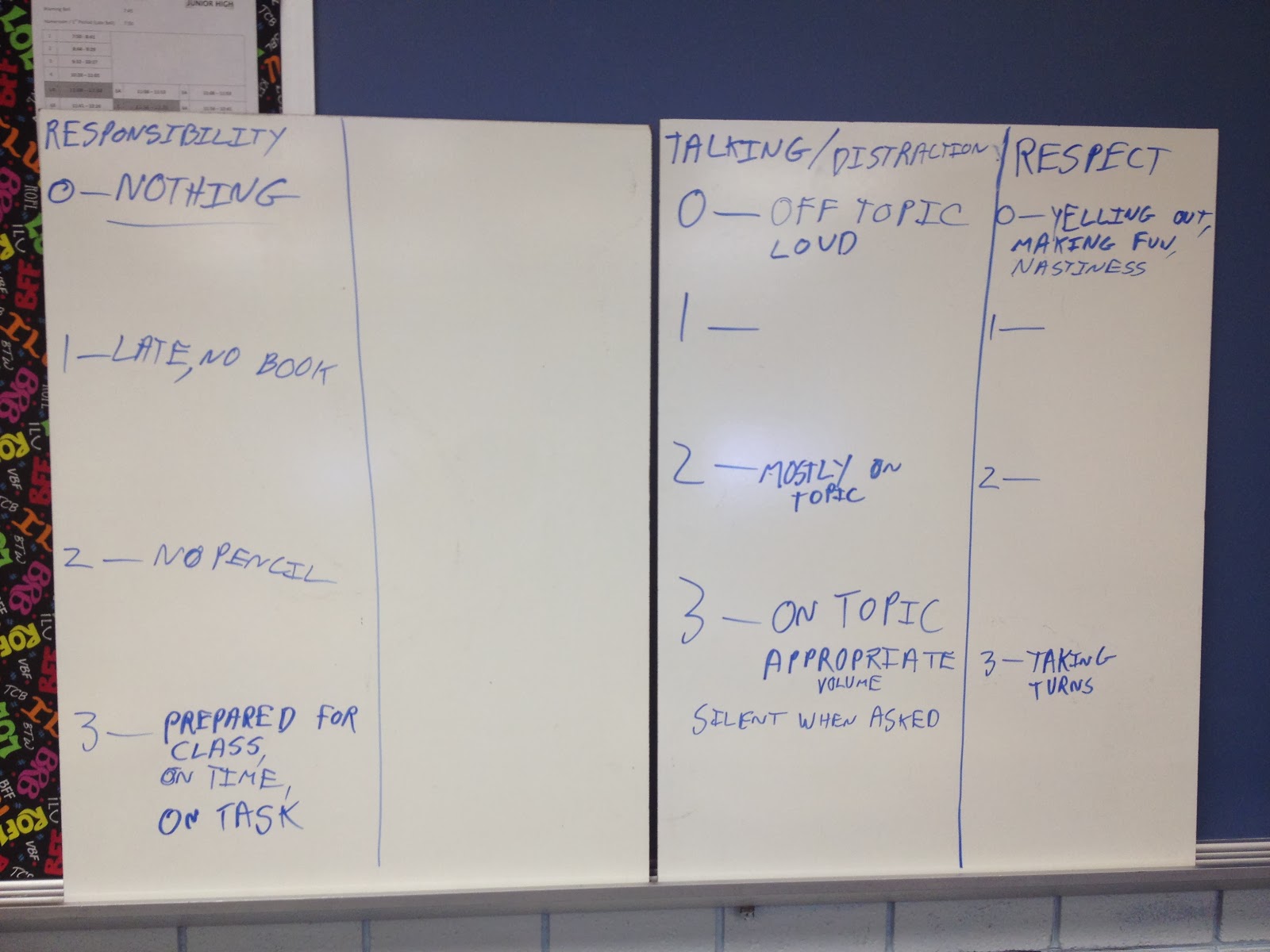 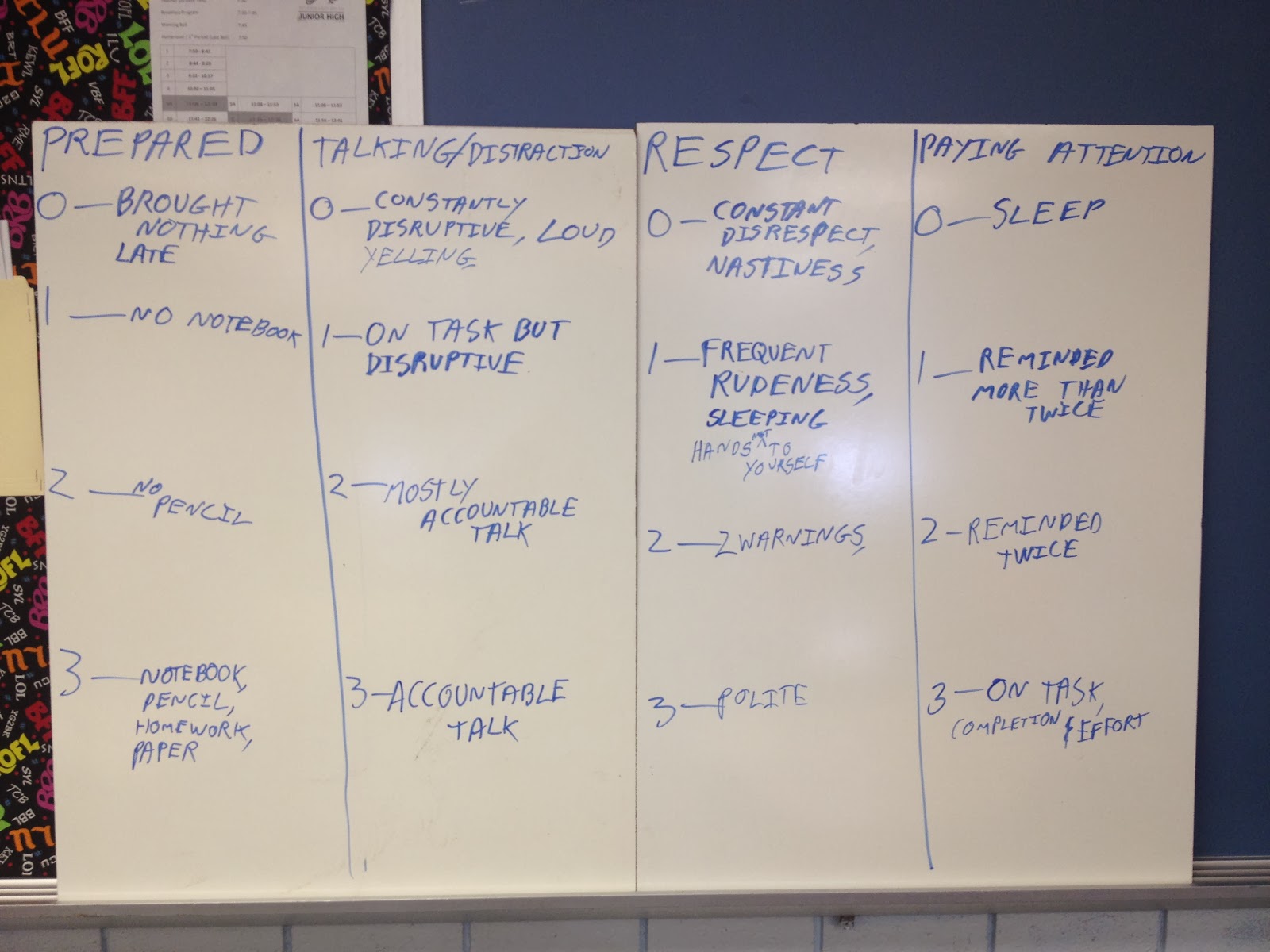 At the end of the period, I asked students how they would rank themselves for the day.  There was a surprising amount of honesty, which I find encouraging.

Me: "What score would you give yourself for paying attention today?"
S: "A 1, I think."
Me: "Why a 1?"
S: "I wasn't really paying attention at all, except for a little bit.  I should pay more attention."

I thanked him for his honesty and his self-reflection.

I also asked them for expectations that they have for me and I will do my best to stick to those as well.  Some of them were very interesting and also give me much to think about. 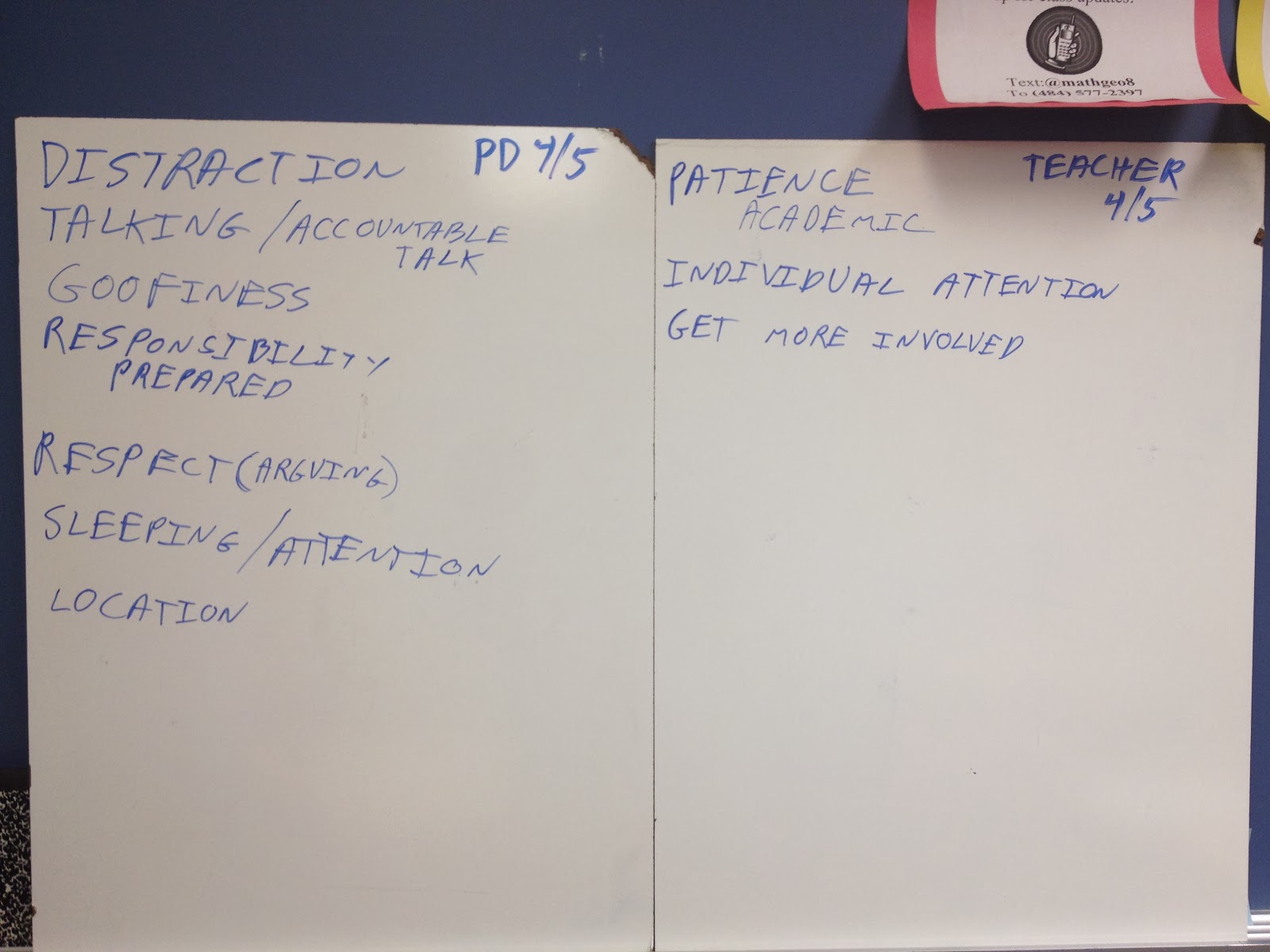 This day has provided much for me to think about, including an anonymous email to the faculty regarding the new vice-principal that is about to be hired.