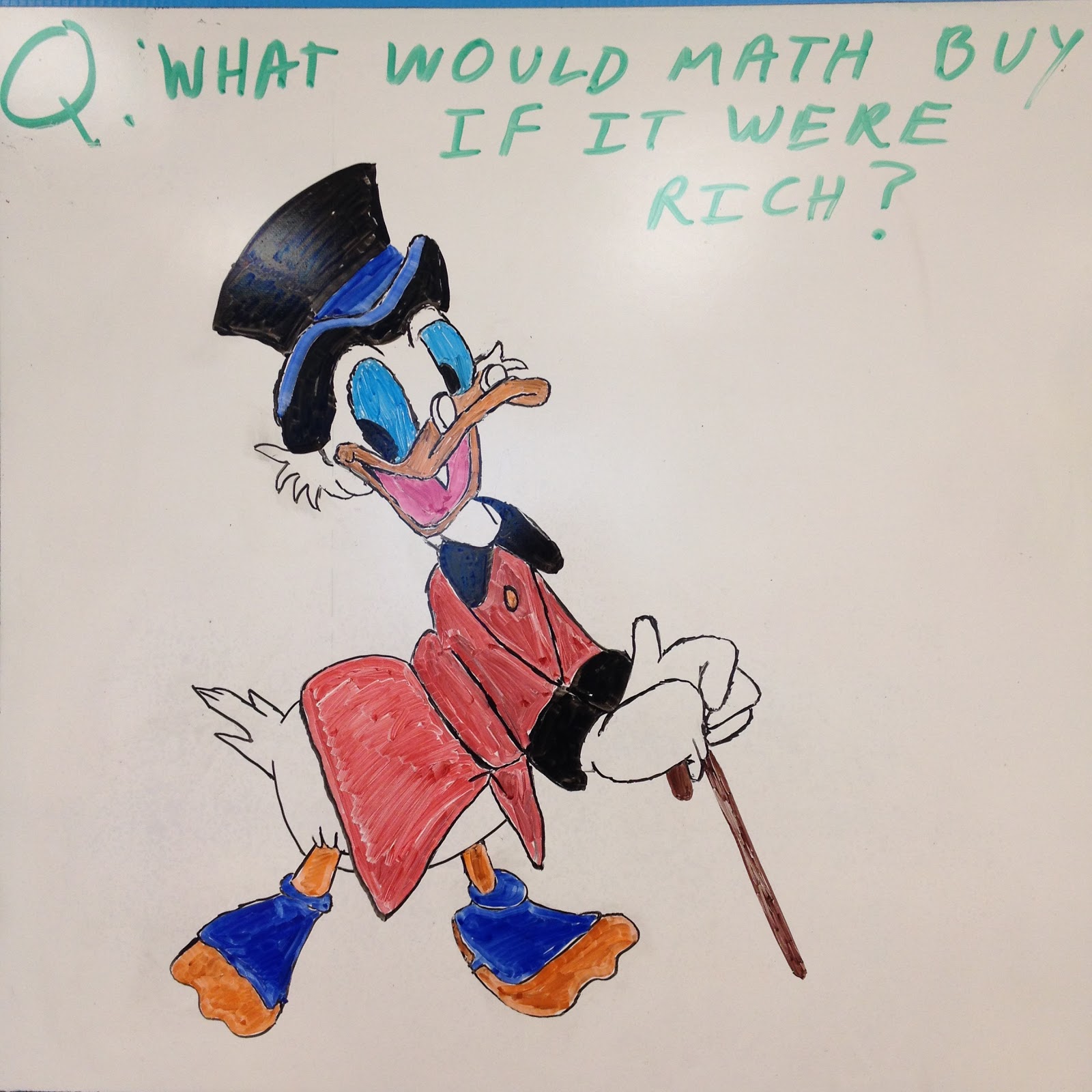 We are about to delve into trig (my favorite topic) in geometry, so instead of starting a new section, I decided to hold off until Monday.  Instead, we covered a few questions about special right triangles and watched another episode of Cosmos.  Several students quietly asked some very insightful questions about the mathematics of Newton's Laws of Planetary Motion.

In pre-algebra, I continued my plan to keep the lights low, and side conversations to a minimum.  The students were a little bit more boisterous, but got back on task when I needed them to.

In period 4/5, we had an extended conversation about lottery winnings and whether it made sense to take your winnings as a lump sum or as an annuity payment.  Several students felt they would be willing to take a lower value of winnings to have a guaranteed check every year, in case something happened.  Others felt they would rather it all because they it would be worth more if they invested it.  The discussion was very interesting.

We moved from lottery winnings to the banking system, interest and how banks make money.  In the examples I used, I had the banks paying 1% interest to depositors and charging 10% interest to the borrowers.

Using nice round numbers, I was able to help them boost their confidence and spend more time on math rather than calculation.  In both classes, we did a ton of verbal practice with me calling out questions and kids rushing to answer them.

I made sure to emphasize that the purpose was not to force them to do all of this in their heads but to let their heads do the work so they can think about other things.  There were several who claimed they would rather set up proportions and do it that way.  Who am I to tell them they can't be less efficient if they want...

In period 8/9, we had a discussion about the reasonableness of an answer.  I demonstrated the value of that using Google Earth.  I asked the students to pick a city that they couldn't find on a map.  They picked Indianapolis.

We did several of these types of examples with me picking Crimea and Toronto.

And then there was a fight outside of my classroom.  One teacher was sent to the hospital after suffering an asthma attack and one of the girls was sent back to class.

It's the weekend.
Email ThisBlogThis!Share to TwitterShare to FacebookShare to Pinterest