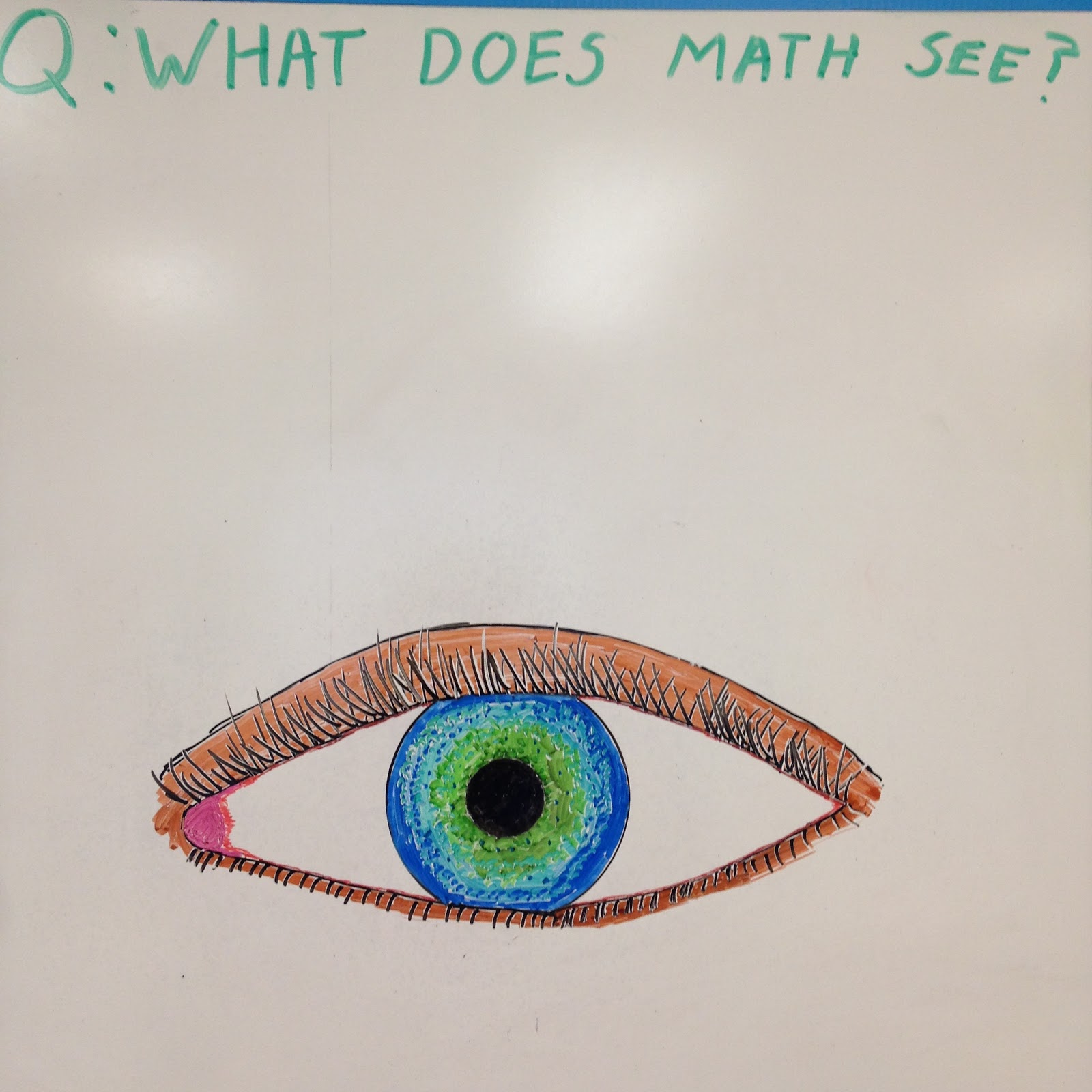 I spent the last week or so figuring out how I wanted to do the culminating lesson for the chapter on right triangles.  I received a TON of help from various math teachers around the internet, including Jen Silverman, Wendy Menard, Audrey McLaren and Megan Schmidt for which I am extremely grateful.

I have the basic outline available for anyone who wants it.  This was a lesson in three parts, Act 1 of which was today.

My lead-in was my whiteboard drawing.  I told the geometry students that I wanted to talk about eyes.  I asked them about the different kinds of eyes they could think of.

We had a discussion about the advantages to each of these types.  The side-facing provided a view almost entirely around the animal, allowing it to see danger no matter where it originated.  But what are the advantages of front-facing?

Sweet!  The discussion moved in to why predators need depth perception, but prey might not.  We talked about lions pouncing on prey and how, if they missed, they would go hungry.  Prey, however, only need to see danger and don't care much how far away it is.

Me: "What about people?  How are our eyes set?  Are we predators or prey?"

I had student hold up their thumbs in front of their faces and look at objects further away as they opened their eyes, one at a time.  We talked about what they saw and why.

S: "Each eye is seeing something slightly different so it looks like your thumb is moving when it isn't."

I had them hold up their thumbs and focus on a far away object, noticing that their image of their thumb was doubled and transparent.

After having them talk about their observations and theories, I asked them to draw diagrams of what each eye was seeing.  Then I told them about my weekend.

After doing a fair amount of yard work, building a raised bed for a garden, raking soil, moving rocks, I collapsed into a chair and began looking over my yard.  I noticed a tree stump at the top of my property.  I closed one eye and covered the stump with my thumb.  Then I opened that eye and closed the other, noting the movement of my thumb.  I estimated the angle between the stump and my thumb to be about 3.5 degrees (in reality, it was about 5.5).  Knowing the distance between my eyes and the distance from my face to my thumb, I was able to calculate the distance to the stump.

I told them about this, but it would be effective to show them.

Thanks to the brilliance and patience of Jen Silverman taking the time to show me how to use GeoGebra, we were able to develop an applet to demonstrate exactly this!

When I got to school this morning, I realized that GeoGebra wasn't installed on my laptop and I had forgotten to upload my applet to GeoGebratube, so I had to recreate it before the kids got there.

Jen is an amazing teacher and I am SUPER excited to learn more from her this coming Saturday!

I explained that in my messing around with the numbers, I discovered that my angle measurement was WAY off and, in order to accurately determine distance, it needed to be very precise, as in to the nearest 1/10 of a degree, not something that can be done without proper instrumentation.  As a result, I opted for this demonstration rather than a hands-on activity.

The students were deeply engaged and I could tell that they weren't sure where we were going with it to bring it back to math.  THAT will be in Act 2.  They will driving stakes into the ground and using those stakes (a much larger, further-spaced version of their eyes) to determine distances of objects outside (weather permitting.)

The original plan was for that to be tomorrow, but we have yet another round of standardized testing that will take up my entire geometry class.

Act 1 went VERY well and I'm glad that I at least made a basic list of the questions I wanted to ask.

Remember the AWESOME activity that we did on Friday? The one where all of the students were engaged and doing work?

In both classes, one group turned in a finished product.  Two other groups tried to turn something in, but it wasn't even half finished and I wouldn't accept it.

I talked to both classes about my frustration and, much to my exasperation, the students who are the most disruptive, least on task, least prepared, were the ones who claimed that I had a bad attitude.  I asked if they thought there might be a correlation between their behavior and my attitude towards them.  I asked them about specific times when they were on task, or at least not disturbing other students and they acknowledged that I never "get an attitude" with them at those times, but I still "get smart" with them.

I asked students who put in great, or even good effort and they thought that I didn't have an attitude.

Even as I'm typing this, I know I've written it before.

I was interrupted by a girl who had been talking over me the entire time.  She asked me if I would please just teach.

It feels very much like watching my children playing roughly.  The older one will hit the younger one who will, of course, hit her back.  The older daughter then comes crying to me about her sister hit her.
"You hit her first."
"SHE STILL HIT ME!"

I think period 4/5 understood where I was coming from, but I think it missed period 8/9 completely.


We have less than 35 days left and I want to make the best out of them.  I'm not sure that having these heart-to-hearts is the best use of my time.  The kids that are attentive to them always are and the ones who aren't are the ones who need it the most.

All in all, a great day in Geometry, a frustrating and tiring day in Per-algebra.
Email ThisBlogThis!Share to TwitterShare to FacebookShare to Pinterest